In an emailed statement, Holtec spokesperson Pat O’Brien said the company is now focused on decommissioning Palisades “to allow for potential reuse.”

While the closure of the plant on Lake Michigan was “not the outcome many had hoped for,” O’Brien said the company “fully understood that what we were attempting to do, re-starting a shuttered nuclear plant, would be both a challenge and a first for the nuclear industry.”

The federal government’s decision was met with celebration by anti-nuclear activists who argued the aging plant posed a meltdown risk, and disappointment by others who worry the plant’s early closure will set Michigan back in its effort to go carbon neutral.

A spokesperson for the U.S. Department of Energy, which oversees the $6 billion Civil Nuclear Credit Program to bail out financially struggling nuclear plants, declined to comment.

A spokesperson for Gov. Gretchen Whitmer, who had lobbied for federal funds to keep the plant open, called the failed bid a “temporary setback.”

The federal government structured the first round of grants from the $6 billion fund to specifically target Palisades and California’s Diablo Canyon plant. The latter received $1.1 billion to stay open, but Palisades was considered a longer shot for rescue because its shutdown process had already begun.

Its former owner, Entery, closed the 51-year-old plant ahead-of-schedule in May, after an issue with a “control rod drive seal.” It then transferred ownership to Holtec, which is responsible for decommissioning the plant and storing its spent fuel.

The closure immediately removed 800 megawatts of emissions-free power from Michigan’s grid (enough to power 800,000 homes), at a time when scientists warn society needs to rapidly decarbonize its energy sources to avoid the worst consequences of climate change.

Holtec announced in September that it had applied for funding to reopen the plant, with support from Gov. Gretchen Whitmer, bipartisan lawmakers, and state regulators who hoped to revive the plant’s 600 jobs and vast power-generating capacity.

Anti-nuclear activists disagreed. In a letter to U.S. Energy Secretary Jennifer Granholm, they raised questions about the wisdom of spending billions of taxpayer dollars to prolong the life of a plant with a history of safety violations. And they argued the plant was ineligible for funding, because the Civil Nuclear Credit Program was not designed to bail out plants that had already closed.

Kevin Kamps, a radioactive waste specialist for the group Beyond Nuclear, cheered the Energy Department’s rejection of Holtec’s funding request in a statement Sunday.

“We are again thankful that this reactor has indeed been shut down before it melted down,” Kamps said.

Holtec is considering the possibility of eventually reusing the Palisades site for a new small modular nuclear reactor, and anti-nuclear activists say they oppose those efforts. 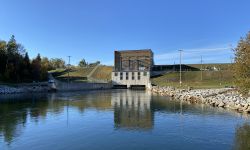 Uncertainty for Michigan rivers, residents as Consumers reconsiders its 13 dams