“I had the thing for years. It might not be much, but it meant a lot to me,” Clyburn said. “My fish died because it got too cold in the house. It made me so sad.”

Residents and activists in the three-square-mile city surrounded by Detroit have long complained of frequent outages that can wipe power out for days, leaving residents in the dark. Now, city officials and Soulardarity, a nonprofit focused on energy independence, hope to address those issues by weaning the city off its investor-owned utility, DTE Energy, and instead powering it with solar-powered microgrids, rooftop solar panels and more.

The audacious vision gained traction earlier this year when the U.S. Department of Energy selected Highland Park for Communities LEAP, a program that aims to help local-income, “energy-burdened” communities adopt clean energy. A federal writeup on Highland Park said the city’s residents, nonprofits and government will work with the feds to swap fossil fuel power for “local, clean, renewable energy.”

The new federal assistance comes as the Biden administration touts its Justice40 Initiative, which pledged to funnel 40 percent of nearly $30 billion in federal climate-related funding into historically disadvantaged communities. Experts say those developments speak to the growing legitimacy of “energy-justice” efforts.

“Residents in these communities are beginning to exercise self-determination,” said James Gignac, senior midwest energy analyst for the Climate & Energy program at the Union of Concerned Scientists. “With these programs, they’re working with technical researchers. They’re building coalitions. People are demanding change and they’re building the means to do it.”

It started with streetlights

Highland Park energy activists say that self-determination has been missing for too long in a city where 45 percent of the city's 8,900 residents live in poverty. Soulardarity emerged after those frustrations reached a breaking point in 2011.

That’s when DTE removed 1,400 streetlights as part of a $4 million settlement that allowed Highland Park to avoid paying several years-worth of unpaid bills. With nearly two-thirds of the city in darkness, local officials advised residents to keep porch lights on to deter crime. [DTE Energy Foundation is a donor to The Center for Michigan and Bridge Michigan. Its contributions did not influence the reporting or direction of this article.]

Soulardarity launched the following year with a mission that started small: Installing solar-powered street lights, one by one, to wean a tiny portion of the city off DTE’s grid. So far, 17 solar lights have been installed, with plans for another 10 next year.

Creating a city-wide solar street light plan is one goal of the city’s partnership with the Department of Energy.

“We went into this knowing how vital this project is for every citizen,” said Rafael Mojica, program director at Soulardarity. “People should never have had to live in darkness.” 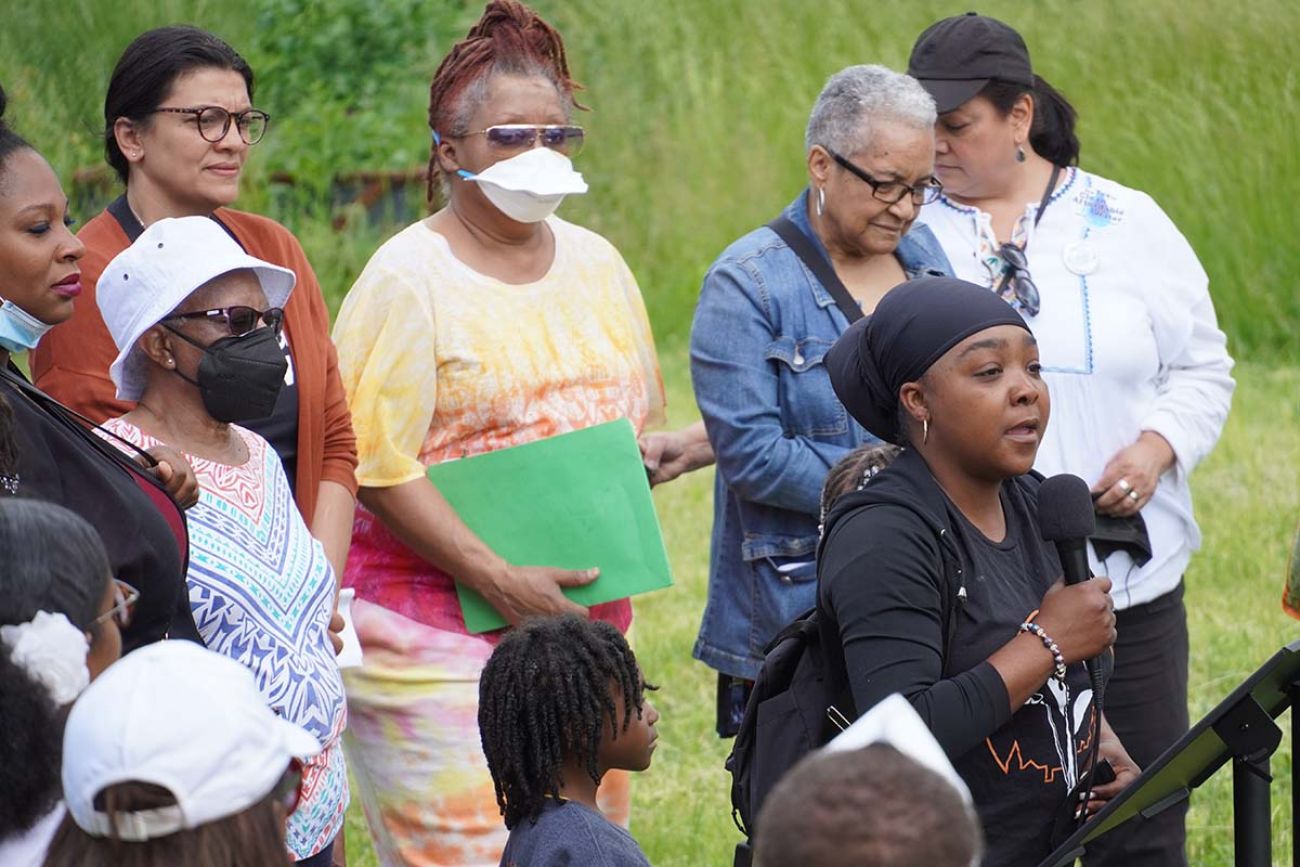 But high electricity rates and power outages continue to be an issue due to aging, inefficient and unsafe infrastructure, said Jackson Koeppel, the group’s founder who now works as an independent consultant for community organizations including Soulardarity.

“Power in half of this city can go down because the wind blows a little too hard,” Koeppel said.

DTE did not respond to multiple interview requests from Bridge Michigan. But company officials have said that Highland Park’s outage rate is not out of the ordinary within DTE’s service area, and that the company is addressing outages by investing in grid hardening and tree-trimming.

In response to their concerns, Highland Park, Soulardarity and their allies are looking far beyond streetlights. They now aspire to make the city a nationwide example of using green energy to reduce the city’s reliance on a monopoly utility.

There would be an up-front cost to install the facilities, said Gignac, of the Union of Concerned Scientists. But “the types of resources we looked at in our analysis, like community and rooftop solar, pay for themselves over time.”

Proponents of the effort say that in addition to providing citizens with more efficient energy, such systems could lower monthly electricity bills because the energy sources, sunlight and waste, cost nothing. Research by the Institute for Local Self Reliance research supports that notion.

Utilities argue that building out utility-scale wind and solar arrays is cheaper than decarbonizing society on a roof-by-roof, city-by-city basis.

“There may have been a time long ago, when getting people to deploy solar on the rooftops was going to make a material difference in getting us closer to a net zero carbon future,” said Andy Coulouris, DTE vice president of corporate and government affairs, when recently interviewed by Bridge for another article. “But we're way past that.”

As it works with the federal government to plot its renewable energy vision, Soulardarity is also considering how to pay for it.

There are plans to apply for federal grants. And Soulardarity staffers are exploring funding options like Michigan Saves, a nonprofit bank that finances renewable energy projects, or having the city front construction costs that residents pay back over time.

By initially funding the projects, citizens would have more control over how energy is distributed through Highland Park, Clyburn said.

Michigan has no law enabling community solar developments, for example, so such projects must be developed through a local utility.  And the law only requires utilities to reimburse a set portion of rooftop solar owners for the energy their solar panels feed into the grid. With DTE nearing the threshold, advocates say they fear residents will soon lose a powerful incentive to invest in solar.

“We need to require utilities to offer net metering,” Gignac said. “If Michigan had a policy where the utilities needed to meet a program to allow virtual net metering, then customers could subscribe to solar projects.”

And renewable energy advocates argue that lawmakers could clear the way for more aggressive residential and community solar adoption by providing new tax abatements and other financial incentives to encourage investment.

“We know we need the financing and the resources to get it done,” said Michelle Jones, a Highland Park resident and Soulardarity’s energy democracy program coordinator. “But if we can get commercial businesses on board, I think we can get this done in the next 10 to 20 years.”

Anxiety when it rains

While the city chips away at its vision for self-supplied electricity, residents and advocates continue to spar with DTE. Modernizing power lines is the latest battleground.

Large swaths of Highland Park run on 4.8 kilovolts (kV) systems that were once considered “state of the art.” But today, they don’t integrate modern advanced technology and are weaker than the more modern 13.2 kV systems common elsewhere in DTE’s territory.

To increase the system’s efficiency and reliability, DTE asked regulators to increase its retail rates by approximately $388 million. Instead, the Michigan Public Service Commission last month approved less than a tenth of that amount, while directing DTE to work with state officials to explore what it would take to upgrade the 4.8 kV system. 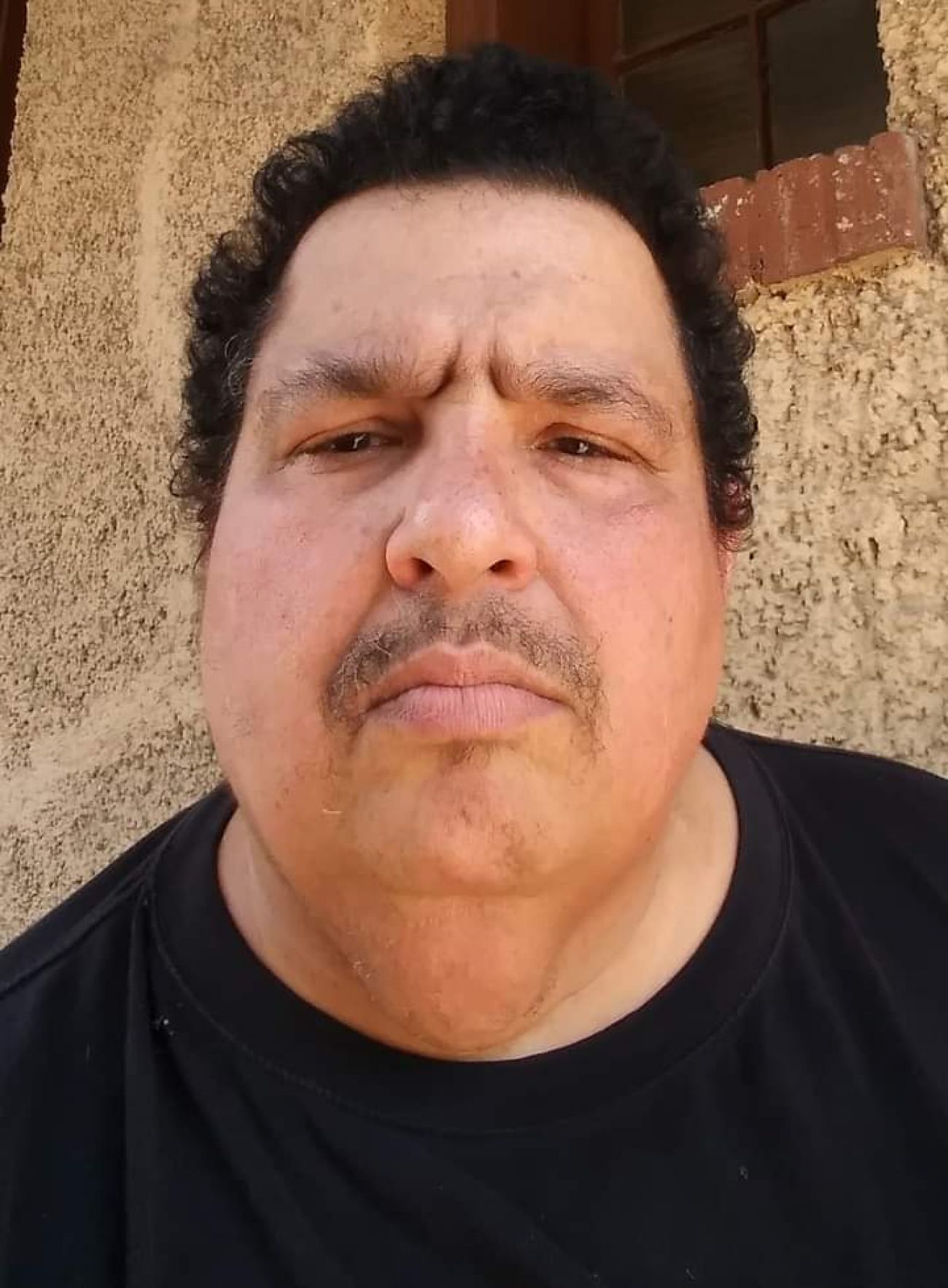 Highland Park resident Eban Morales is disabled and requires stable electricity to stay alive. He said he lost hundreds of dollars worth of food and medicine during an outage last July. (Photo courtesy of Eban Morales)

While all sides wait for a resolution, Highland Park resident Eban Morales said he is bracing for the next storm. The last one to hit, in July, knocked out the power and left him unable to use the mobility chair, breathing machine and pneumatic compression machine he needs to manage diabetes, breathing issues and other ailments. Two-hundred dollars worth of food and medication went to waste in his refrigerator.

Such incidents are so common, he said, “I’ve developed anxiety when a storm happens.”

It’s those personal crises that Mojica said Soulardarity hopes to end. He envisions a future where downed power lines won’t trouble Highland Parkers, because their homes will be powered by the sun that hits their rooftops, rather than electricity that travels along poles and wires from distant power plants.

“We’re seeing a lot of excitement around our efforts,” Mojica said. “We know this is feasible, and there’s no reason other communities can’t enjoy the same benefits that Highland Park will receive.”