The Michigan Public Service Commission is best known as the government body that decides whether gas and electric utilities can raise their rates.

But, the commission has other duties. Right now, it’s looking at whether Enbridge Energy’s plans to move a segment of its Line 5 oil and liquid natural gasses pipeline into a tunnel is safe.

In an unusual move, the commission is also reviewing what keeping Line 5 operating means for climate change.

Environmental groups, some businesses, Native American tribes and Governor Gretchen Whitmer, among others, want the nearly 70-year-old Line 5 pipeline shut down. Line 5 sits on the lakebed of the Straits of Mackinac which connects Lakes Michigan and Huron. Advocates are worried about the risk of an oil spill in the lakes.

In a deal with the previous governor, Rick Snyder, Enbridge proposed constructing a tunnel under the Straits to house Line 5. 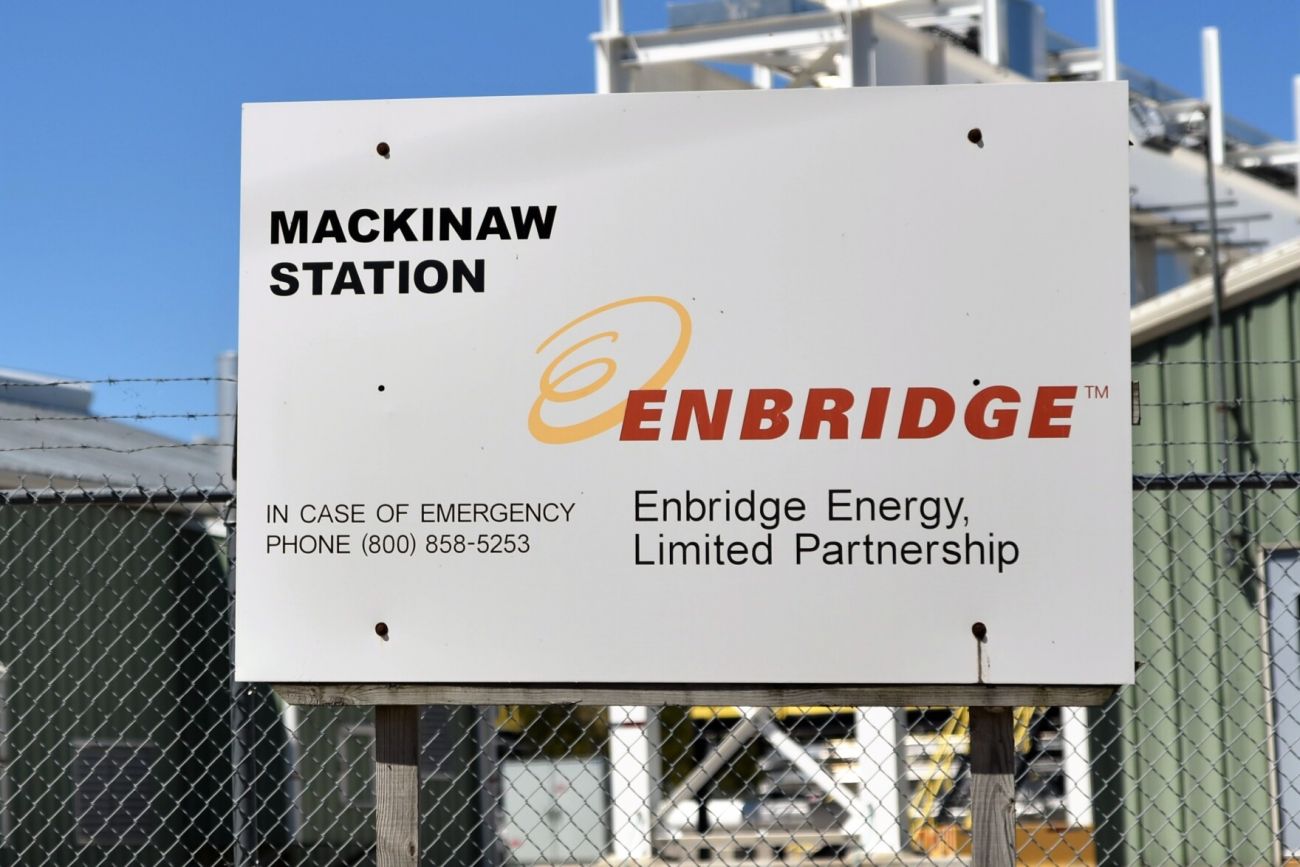 Typically, the Public Service Commission would look at the impacts of moving the line. Will construction bother the neighbors? Will it impact fishing or interfere with Native American tribal rights? Will it damage the environment?

Evaluating the impact on climate change if Line 5 continues to operate is new.

“We need to start treating climate as the expensive problem that it is,” said Margrethe Kearney, a senior attorney with the Environmental Law and Policy Center. She said the fact that the Public Service Commission is weighing those costs is precedent-setting for Michigan.

“It means that our agencies and our decision-makers are going to be taking climate into account moving forward, and that benefits all of us, because it will avoid those projects that have enormous greenhouse gas emissions that worsen climate change and impact us all on a financial and public health level.”

Kearney said it’s possible the Commission could turn down a permit to move Line 5 to the tunnel. Governor Whitmer has ordered Enbridge Energy to shut down Line 5, a matter that federal or state courts could decide. Enbridge could be forced to find different ways to get the Alberta tar sands oil to Canadian and U.S. markets some other way.

“Because it's more expensive to ship that oil by other methods, especially by rail. Less of it will be shipped and less will be consumed and so on net you will have a reduction in greenhouse gas emissions,” she said.

But, environmental groups had to make a convincing argument to the Public Service Commission. The Environmental Law and Policy Center and Michigan Climate Action hired experts. One of them is the Climate Policy Program Director of the Stockholm Environment Institute, Peter Erickson.

He said shutting down Line 5 and transporting by rail or some other way could ultimately lead to fewer greenhouse gas emissions.

“If the Line 5 pipeline did not re-start, global oil prices would increase, and consumption and emissions would decrease,” he stated in written testimony. 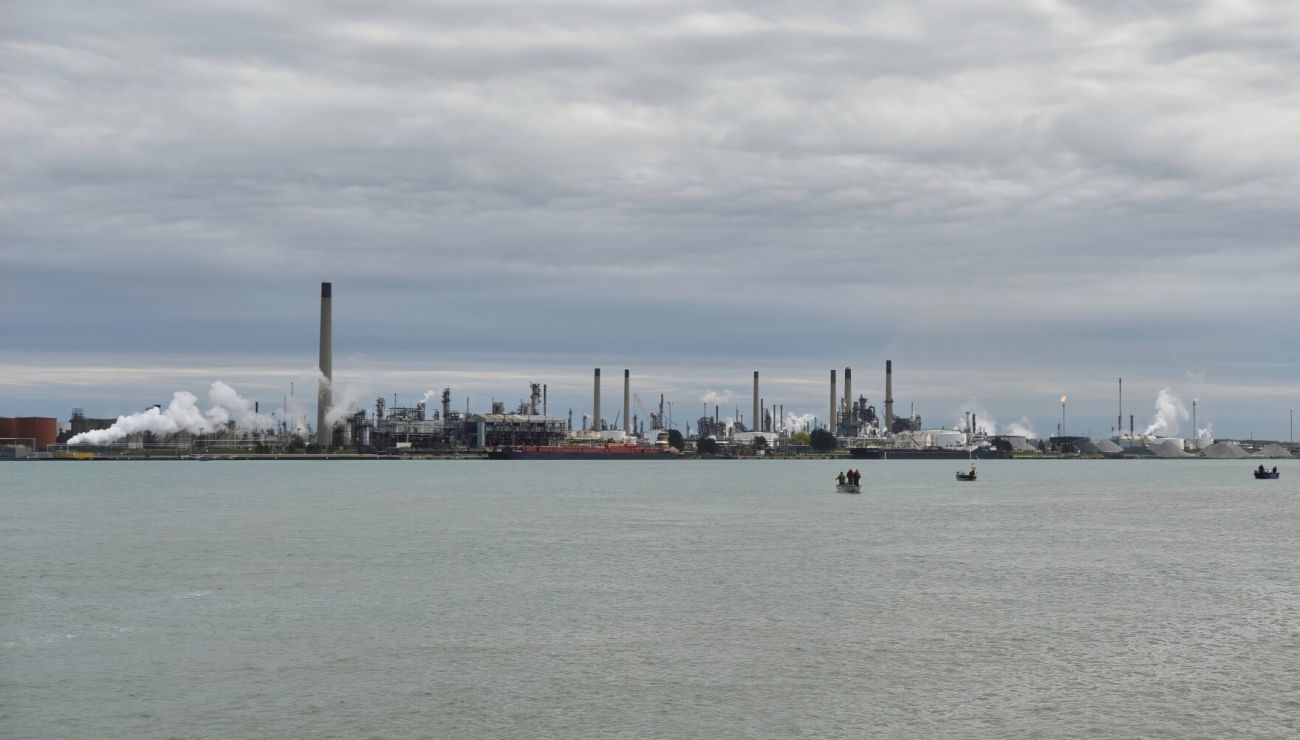 Sarnia, Ontario is the eastern terminus of Line 5. It starts in Superior, Wisconsin, spans the Upper Peninsula of Michigan, crosses at the Mackinac Straits on its way to Sarnia's Enbridge facility. (Lester Graham/ Michigan Radio)

Jeffrey Bennet is Enbridge Energy’s Senior Air Quality Engineer. He called the environmentalists’ analysis “flawed.” The pipeline company’s expert said they underestimate the capacity of the pipeline systems in Canada and the U.S. And he said they overestimate the cost of rail shipments. The company’s analysis shows the effect on crude oil prices would be negligible. He said that means the environmentalists’ projections about reduced consumption – and reduced emissions – are wrong.

The one thing they agreed on is that transporting the crude oil by rail would mean more greenhouse gasses emitted by trains – although their estimates of how much were very different.

In an emailed statement to Bridge and Michigan Radio, Enbridge Energy said, in part:

“Compared to the alternatives of truck, rail, or lake-going barges, pipelines are the safest mode of transport for moving fuel. Pipelines have lower emissions, and are more reliable and affordable. Placing the pipeline in the Great Lakes Tunnel also better protects the Great Lakes over the long-term.”

It also indicated the tunnel would assure long term energy reliability for Michigan.

Jonathan Overpeck is the Dean at the University of Michigan’s School for Environment and Sustainability. He is one of the Nobel prize-winning authors of the Intergovernmental Panel on Climate Change report.

“The amount of fossil fuel that gets transported through that pipeline in that tunnel will be huge. And it's equivalent to multiple coal fired power plants per year. And the climate change damages associated with that will be in the billions of dollars per year,” he said.

He said Line 5 is beyond its intended lifespan. It’s been hit and damaged by boat anchors. He added it’s an unsafe threat of an oil spill in the Great Lakes. He believes it should be shut down and a tunnel under the Straits should not be constructed.

“It makes no sense to spend the money, the investment that we as consumers will have to pay to build this infrastructure that then will essentially screw us going forward with even more costs associated with climate change.” 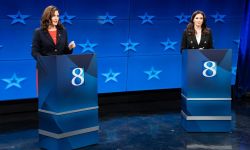