Warm weather, low snowfall and thin ice are getting in the way of business as usual for Michigan’s outdoor recreation industry.

“This is the worst winter I’ve ever experienced,” said Brian Webber, standing in his sporting goods store in Essexville on a rainy 37-degree day in January.

On a normal winter morning over the last 34 years, Michigan Sportsmen Bait-Tackle would be bustling, supplying anglers with lures, shanties and propane for ice fishing on nearby Saginaw Bay.

But lower than average ice coverage across the Great Lakes this winter means ice isn’t thick enough for enthusiasts like Webber, who’s fished every winter for the last 40 years, to head out on the bay.

Add weather that’s, on average, 7 degrees warmer than usual and toss in upward of a foot less snow (and extra rain), and Webber isn’t the only one sweating this year’s mild winter.

Ski hills are closing runs, snowmobile trails aren’t being groomed, festivals are changing plans and business is down at bars that rely on winter enthusiasts. Some fear that extreme weather, prompted by climate change, could be the new normal.

“There’s a clear trend toward less consistency in winter,” said Brad Garmon, director of the Michigan Department of Natural Resources’ Office of Outdoor Recreation Industry. Current climate “trends are going to make it harder to predict that we’ll have solid snows.”

Outdoor recreation contributes some $10 billion annually Michigan’s economy, according to federal statistics, with $73 million of that coming from skiing, snowmobiling and other snow activities. Nationally, outdoor recreation generates nearly $27 billion in sales, according to the Outdoor Industries Association trade group.

Most winter mornings, Webber said he’d have “40 to 50 guys through” his store. On a recent day, when speaking to Bridge, he had three.

“The number of people coming in for ice fishing is one thing, but there’s been a decline in guys going snowmobiling –  any activity, really. The only benefit this winter has given anybody is a break on their heating bill,” he said.

“If we don’t have a good spring it may well be [my last winter in business].” 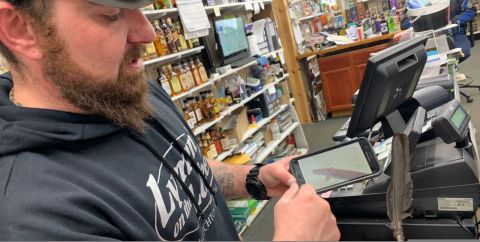 ‘Our economy up here relies on snow’

In Glen Arbor in northern Michigan, steady snow still hasn’t arrived on the ski hills at the Homestead, a resort on Lake Michigan, and warmer weather makes it difficult to produce their own, said Tom Bartholomew, Homestead’s senior manager of recreation.

As a result, only nine of the resort’s 15 runs are open.

“We’re not able to charge full price for our lift tickets where we were counting on a full-price ticket… And the customers, when they found out that we’re not fully open, that affects their decision to come to the Homestead,” he said.

The resort has cut full-day, adult lift tickets in half to $25 and slashed its winter recreational staffing to 45 employees from 60, Bartholomew told Bridge Magazine.

The resort also has a smaller-than-average staff this winter for housekeeping and dining operations, and its snowmaking and removal crews are unable to work.

That’s bad news for workers in an area reliant on tourism and seasonal work in a state where hundreds of thousands of jobs are tied to the outdoor recreation industry.

“Anything impacting the Homestead definitely impacts us,” said Tim Barr, owner of the nearby Art’s Tavern.

It’s the weather itself that holds a larger sway on the business, however, Barr said. Winters have gotten “more chaotic” over the last 10 years, making it harder for locals or tourists to visit.

“Nothing’s normal anymore. You don’t just roll into winter about the 15th of November and have the snow go away towards the latter part of March. You just never know what’s going to happen.”

Indeed, six of the 10 hottest years on record globally were in the last decade. Research indicates rising global temperatures will likely increase the number of ice-free winters for lakes across Michigan, and decrease the amount of snow cover in North America.

In Presque Isle County in the northeast Lower Peninsula, the Presque Isle Sno-Trails, a snowmobile club, is also struggling.

The group partners with the state to maintain over 130 miles of snowmobile trails, and club president Dave Campo said they can’t care for the trails consistently until weather cools down. 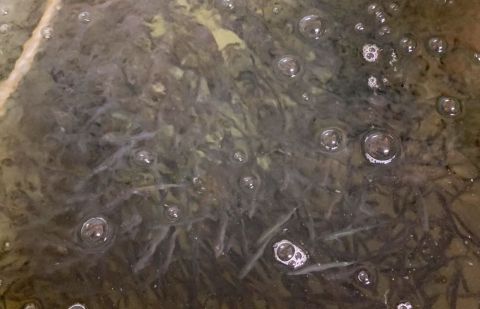 Business is down 30 percent at Peegeo’s, a bar popular with snowmobilers in Grand Traverse County, because of reduced trail traffic, said George VanKersen. The long-time owner spoke to Bridge Magazine before selling the bar to a local restaurant last week.

“I have pictures of this parking lot where you can’t park your car in it, and it’s all snowmobiles,” he said.

“Snowmobilers would literally be lined out outside the door waiting to get in here,” he said. “We don’t have any snowmobiles here now.”

“Our economy up here relies on snow for guys to make a living,” said VanKersen. “They haul it, they push it, and they’re not doing it, so then they're not coming in for lunch. It’s just a whole big circle ….”

Some 75 miles north of the Saginaw Bay, sales are up at Lyman's On the Lake, a fishing shop on Houghton Lake, and fishing enthusiasts from as far south as Ohio and Indiana are calling in search of ice.

Even Houghton Lake’s ice isn’t as steady as usual, he said. The lake has thawed three times when it normally stays frozen all winter, and the ice is thinner than last year.

The winter doldrums, though, ease the farther north enthusiasts go in Michigan.

Susan Estler, executive director of Travel Marquette, said weather is cooperating in the northernmost reaches of the state. There was plenty of snow for the 22nd annual Noquemanon Ski Marathon, and she said great conditions are expected for upcoming winter fun such as Polar Roll biking event, Honey Bear Classic ski festival and UP200 dog sled race.

In flooded Michigan neighborhoods, who should pay for sea walls?