Michigan Gov. Whitmer: State facilities will run on renewables by 2025

State of Michigan office buildings and other facilities will run on renewable energy by 2025, Gov. Gretchen Whitmer announced Thursday.

“Today’s clean energy commitment by the state will serve as an example for companies and municipalities across Michigan to rise to meet this moment, too,” Whitmer said.

Whitmer has vowed to make the entire state carbon-neutral by 2050 — a goal that will require major changes to the way Michigan gets its energy.

Clean energy leaders praised the move as a symbolically and practically important step.

Although the state government’s energy at offices, prisons, labs and other state facilities use is a tiny fraction of Michigan's overall energy footprint, advocates say Michigan’s buying power will help utilities expand their renewable generation.

By committing the state to renewables, Whitmer “is making sure the state does its part” to achieve the statewide carbon neutral goal, said Lisa Wozniak, executive director of the Michigan League of Conservation Voters.

Michigan will partner with DTE, Consumers Energy, and the Lansing Board of Water & Light to purchase renewable energy. A state release said this would involve expanding each utility’s renewable energy portfolio, rather than purchasing existing renewable power.

The state is also launching an “interagency team” to develop a plan for generating solar power on state-owned land and buildings. The announcement was timed for Earth Day.

Whitmer and Biden have both framed climate action as an environmental necessity and an economic opportunity that will bring jobs in solar, battery technology, construction and other sectors as the country works to build out renewable infrastructure.

On Thursday, Whitmer again reinforced the message, saying that decarbonization will bring “tens of thousands of good paying jobs” to Michigan.

How the state plans to meet its broader climate goals remains to be seen.

A state advisory group tasked with recommending actions is still early in its work. 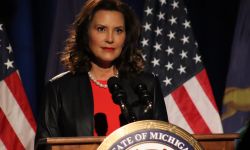