No doubt, Michigan’s summer sunrises and sunsets are something to behold. And if they’ve been particularly vibrant lately, you can thank — or blame — Canada and the west coast.

That’s because wildfires thousands of miles away are making for hazy weather, obscuring clouds and turning typically yellow sunsets into panoramas of orange, red and pink.

While the views have been magnificent, the sunsets also have raised concerns about air quality in Minnesota and other states and promoted fears they could accelerate climate change.

“We really have been dealing kind of off and on with the hazy skies since the beginning of the month, and that is because we have had a persistent area of high pressure out west and that’s pushed the jet stream pretty far to the north,” said Sabrina Jauernic, a Gaylord-based meteorologist with the National Weather Service.

Here’s what you need to know.

What is causing this haze?

Wildfires have taken over large swaths of the West, including Montana, Idaho, Oregon and Washington. There are more than 90 fires total in several states, according to the National Interagency Fire Center.

As smoke from those fires blow east, wildfires are also consuming central Canada, which has experienced 4,891 wildfires as of July 28. That is over 1,000 more wildfires than the 10-year average of 3,753.

“I would say the vast majority of the smoke over our area right now is stemming from fires in Canada as opposed to like the western United States,” said Jordan Wendt, meteorologist at Marquette’s National Weather Service.

‘“That’s mainly due to northwest winds aloft and there’s quite a few fires just to the east of Lake Winnipeg along the Manitoba and Ontario border. The northwest wind kind of tracks right over upper Michigan and northern Minnesota across Lake Superior.”

Much of PA is under hazy skies today due to smoke from wildfires in Canada. We have received pictures of red sunsets, but why does that happen under smoky skies? We see yellow sunsets because blue light is scattered by the atmosphere, but the smoke enhances this effect! #PAwx pic.twitter.com/qmYGXeTuVO

The smoke from the fires is trapped in the upper atmosphere and winds move it throughout the country.

You can notice the difference most at sunrise and sunset, though, because of the science behind light and wavelengths.

Smoke scatters shorter wavelengths like yellows and blues, but “longer wavelengths, like red and orange, can pass directly through the smoke layer,” according to the National Weather Service.

“You see a red-orange sunset.”

What does this mean for Michigan’s air quality?

The fires have prompted Minnesota and some other states to issue air quality alerts.

Last weekend, Michigan also had some issues with air quality, and state officials said there were some spikes in areas like  Grand Rapids that could be attributed to the wildfires.

Even so, there’s no cause for concern yet, said Hugh McDiarmid, a spokesperson for the Michigan Department of Environment, Great Lakes and Energy.

“The upper atmosphere definitely has a thick smoke layer… but not a lot of it seems to be mixing down to the surface air,” he said.

“Generally … even though you can see it and even smell it in Michigan, it hasn’t really had a significant effect on overall air quality in MIchigan - at least not yet.”

According to AirNow’s Fire and Smoke Map, certain areas of Michigan’s air quality index are deemed “moderate” and “good” as of Tuesday. 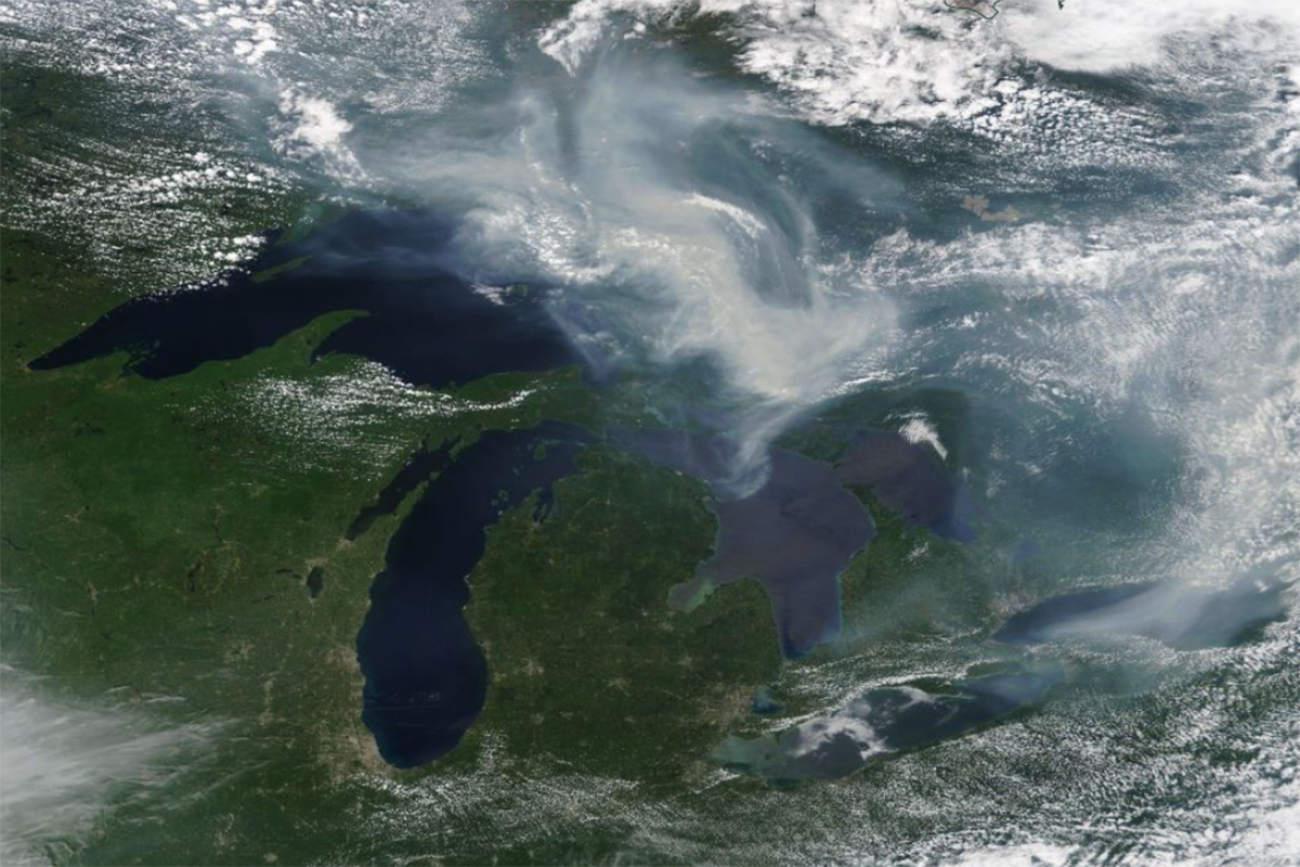 “There would have to be pretty dense smoke near the surface for it to have any kind of impact on the person otherwise it's just suspended in the air and just obscuring visibility and creating like the off colored sun,” said Wendt, the meteorologist.

Although Michigan is not seeing any drastic changes in air quality, areas of the state might be affected differently. Factors such as temperature, wind, the direction of the wind and the terrain could all affect how an area is impacted.

McDiarmid said those with health conditions should take precautions.

“To this point (the fires have’t) had a big impact, but it’s one more drop in the bucket of unhealthy air for people who are sensitive to that,” McDiarmid said.

Michigan provides some tools for residents to keep track of air quality, including local air quality indexes and other general information.

How long should Michigan expect to see these effects?

It depends on how long the fires last.

“What you are looking for after the wildfires end is high winds just to dilute the smoke and mix it out  of the atmosphere,” Wendt said.

“So that could be in the order of even just a couple of hours or a day. If the winds are pretty strong it will move all of the smoke away and mix it out as long as there are no wildfires producing more of course.”