Clerk decries ‘tyranny’ after Michigan strips her of running election

LANSING — A small-town clerk who refused mandatory maintenance of her voting tabulator says she is hiring attorneys to fight government "tyranny" after Michigan officials stripped her of authority to conduct next week’s municipal election.

Adams Township Clerk Stephanie Scott, a Republican, told Bridge Michigan she does not trust the machine she inherited upon taking office this year and wants to preserve any old data on it, echoing unfounded claims that tabulators may have been rigged against former President Donald Trump in 2020.

Scott also ignored state requests to confirm whether she would sign off on legally required “logic and accuracy testing” but told Bridge she still planned to conduct that testing on Wednesday night even as she explored the possibility of ditching the tabulator to conduct a hand-counted election.

The embattled clerk described her feud as a battle over "who owns the tabulator and who has rights" to inspect or service it.

"The county clerk's office and now Secretary of State are demanding I drop off my machine for unfettered access, and God only knows doing what to it,” she said.

“When you have the fox guarding the hen house, somebody's got to stand up and guard those hens.”

State officials contend Scott is spreading misinformation about Hart Intercivic Inc. voting machines — which do not actually store old voting data — and failed to fulfill her legal responsibilities, making her unfit to administer the Nov. 2 election that will decide a proposed school operating millage renewal.

Secretary of State Jocelyn Benson's office on Monday took what government observers called an aggressive step with little precedent: The Michigan Bureau of Elections directed Scott to step aside and allow Hillsdale County Clerk Marney Kast, also a Republican, administer the election instead.

“The voters of Adams Township expect, deserve, and have a right to have their election carried out in accordance with all state and federal laws,” Benson said in a statement. The first-term Democrat predicted Kast "will administer the election in a manner that ensures that it is legal, transparent, and secure.”

The local election takeover is rare but a “reasonable” use of authority because Michigan law gives Benson wide berth to run state elections and ensure local compliance, said Chris Thomas,  an elections consultant and retired director of the Michigan Bureau of Election.

“I fear this is sort of a foreshadowing of what may come,” he said.

Thomas recalled only one similar action during his 36-year tenure at the Michigan Bureau of Elections: In 2005, the state sought and obtained a Wayne County Circuit Court order to take over Detroit absentee balloting because of an alleged violation by the city clerk.

“Very rarely did I ever have a clerk refuse to do her job,” Thomas said. “And I never had anything similar to the current environment of people really buying into a propaganda campaign that is not based on truth, and that’s what it sounds like is going on here.”

‘Year of the lie’

Adams Township is the latest in a series of unlikely fronts in the increasingly longshot conservative hunt for voter fraud in the 2020 election, which Benson has touted as one of the safest and most secure in Michigan history.

Only 1,360 Adams Township voters cast ballots in the presidential election, with 76 percent backing Trump, up from 75 percent in 2016. Scott was also on the ballot for the part-time clerk position, but ran unopposed.

Adams and other local communities in Hillsdale County use Hart voting machines — not the Dominion Voting Systems equipment that conspiracy theorists have fixated on since an initial results reporting error in rural Antrim County that was caused by human error in the GOP clerk’s office.

Scott did not take office until 2021 but said she is concerned about the integrity of the 2020 election after observing an initial round of equipment testing this spring, which she does not believe was sufficient to prove accuracy.

The Republican clerk outlined her theory in a special township meeting on Oct. 11, where she sought backing from local commissioners as she considered conducting a machine-free election with hand counts.

Commissioners, though, were concerned a hand count may violate longstanding Michigan law, which requires the Secretary of State to use a “uniform voting system” in all jurisdictions.

Adams Township Supervisor Mark Nichols praised Scott and encouraged officials in other communities to follow her example. Voting machines “have been a tool to steal our elections” and 2020 was “the year of the lie,” he alleged.

But Scott made “numerous false statements” in the township meeting, according to Michigan Bureau of Elections Director Jonathan Brater.

In an Oct. 15 letter, Brater instructed the clerk to correct her claims and warned of “consequences should you continue to fail to perform your statutory duties.”

Among other things, Scott had told residents the township tabulator could not have been properly tested before the 2020 election, because doing so would have required feeding more than 200 million different ballots into the tabulators to test all possible marking configurations.

She also suggested the testing was prepared by a firm called Election Source, which has figured prominently in conspiracy theories about the Antrim County election. Scott also repeated claims of internet connectivity that have already been debunked by the Republican-led state Senate Oversight Committee.

"If they're not tested properly for the programming, and they are potentially online, everything's up in the air as far as the credibility of that machine," Scott told Bridge Michigan this week.

Her allegations are based on mistaken assumptions about election systems, Brader told Scott in the Oct. 15 letter, explaining that Hillsdale County does not use the Election Source vendor for any election-related services

Spectrum, the firm that did prepare test ballots ahead of the 2020 election, met all applicable requirements of Michigan law, Brater continued, telling Scott that online records suggest she never reviewed state instructional materials.

Data from prior elections are stored on Hillsdale County servers — not tabulators, Brater continued. And while Adams Township voting machines have modems, those are only activated after polls close to send unofficial results to the county, which are later confirmed by printed tape and a county canvass.

"By communicating false or misleading information about elections in Michigan, you risk not only undermining confidence in democracy in your community, but also amplifying threats and intimidation of your fellow election officials across our state which, fueled by misinformation, continue unabated," Brater told Scott.

Scott told Bridge Michigan she still planned to conduct required testing Wednesday evening, but she confirmed she had refused to communicate those plans with the state because they also asked her to pledge she would continue using county-approved tabulators in future elections.

“I don't feel like I live in a country that I have to swear an allegiance to something like that,” she said. "I still have the obligation to perform that public accuracy test, so I will be there. I don't know how it will turn out at this point. Everything's up in the air."

Scott told Bridge she does not believe the state has the authority to remove her election powers and is consulting with outside legal counsel. She declined to identify any of the attorneys she is working with.

Conservative activists who continue to question Democratic President Joe Biden’s 154,188-vote Michigan win have spent months challenging the accuracy of voting machines. But they have so far failed to produce any evidence of hacks or related fraud in the 2020 contest.

Attorney Matthew DePerno, who is running for Michigan attorney general with Trump’s endorsement, on July 13 sent a non-binding "cease and desist" letter to Election Source demanding the vendor cancel any planned tabulator maintenance because it may "destroy or alter" voting records.

Brater wrote clerks the next day, July 14, urging them to ignore any "communications or threats claiming that they should not conduct preventative maintenance," which he called a routine and contractually required process to "ensure the proper function and accuracy of machines" for future elections.

In more recent letters to Scott, the Michigan Bureau of Elections has reminded the Adams Township clerk that all Michigan elections are conducted by paper ballots that she and other officials must retain for at least 22 months.

“If you truly have concerns about whether voting tabulators accurately counted ballots, you can review the paper ballots from the November 3, 2020 election in your jurisdiction, which are in your possession,” Brater told Scott on Oct 15.

“Any other clerk in Michigan can do the same, and any member of the public can inspect the paper ballots by submitting a Freedom of Information Act request.”

Kast, the Republican Hillsdale County Clerk now tasked with running the Adams Township election, said she is "well prepared" to do so.

While she declined to discuss Scott's accusations, Kast told Bridge Michigan she is not aware of any problems with Hart voting machines used in Hillsdale County and said local elections “are run to the utmost integrity."

Election officials in other parts of the state told Bridge they were surprised by Scott’s recalcitrance and noted that clerks can actually face criminal charges if they refuse to perform required duties.

"People make decisions that sometimes they should regret later," said Livonia Clerk Susan Nash, a Republican, who told Bridge Michigan she had been contacted by activists who also wanted her to refuse tabulator maintenance. 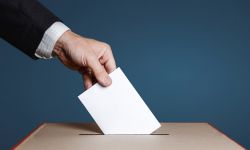