LANSING — Michigan State Police launched a criminal investigation Thursday after election equipment at the center of a voting tabulator conspiracy theory went missing this week in a rural, conservative community.

Hillsdale County Clerk Marney Kast, a fellow Republican who the state tasked with running the local election instead of Scott, told Bridge Michigan her office attempted to retrieve the Adams Township equipment earlier this week but was unable to locate the tablet, which she described as the “brains” of the machine.

"I don't know where it's at or if it's been tampered with," Kast said.

Scott, the Adams Township clerk, did not immediately respond to requests for comment on Thursday from Bridge.

In a rare move, the Michigan Bureau of Elections this week stripped Scott of her election administration authority, accusing the first-term clerk of refusing to fulfill her “legal responsibilities” and spreading misinformation about the tabulators used in Hillsdale County.

A spokesperson for the first-term Democrat cited a "pending criminal investigation” but did not provide any additional details or respond to a request for a copy of any recent communications with Scott.

Kast said she and staff went to the Adams Township hall to secure the voting machine on Monday at the direction of Michigan Bureau of Elections Director Jonathan Brater, who had written Scott that day instructing her to refrain from any election administration activity.

County officials collected the tabulator case, but when they unlocked it the next day in their offices at the Hillsdale County Courthouse, "the tablet was missing," Kast told Bridge.

Scott told Bridge on Tuesday that she was concerned about the accuracy of the tabulator and feared maintenance or servicing could wipe old data, echoing unfounded claims that voting machines may have been rigged against former President Donald Trump in 2020.

She accused the state of “tyranny” for stripping her election authority.

"The county clerk's office and now Secretary of State are demanding I drop off my machine for unfettered access, and God only knows doing what to it,” Scott told Bridge earlier this week. “When you have the fox guarding the hen house, somebody's got to stand up and guard those hens.”

The state recently warned Scott of potential "consequences should you continue to fail to perform your statutory duties" and asked her to correct "false" statements.

Brater told her by letter that the tabulator itself does not actually store any data, which is instead housed on a USB drive during each election and later downloaded onto a county servier for preservation. Local clerks retain all paper ballots.

Scott’s personal Facebook page includes memes in support of QAnon, a wide-ranging conspiracy theory alleging world governments are controlled by a shadowy cabal of pedophiles who worked to undermine Trump and steal the 2020 election. 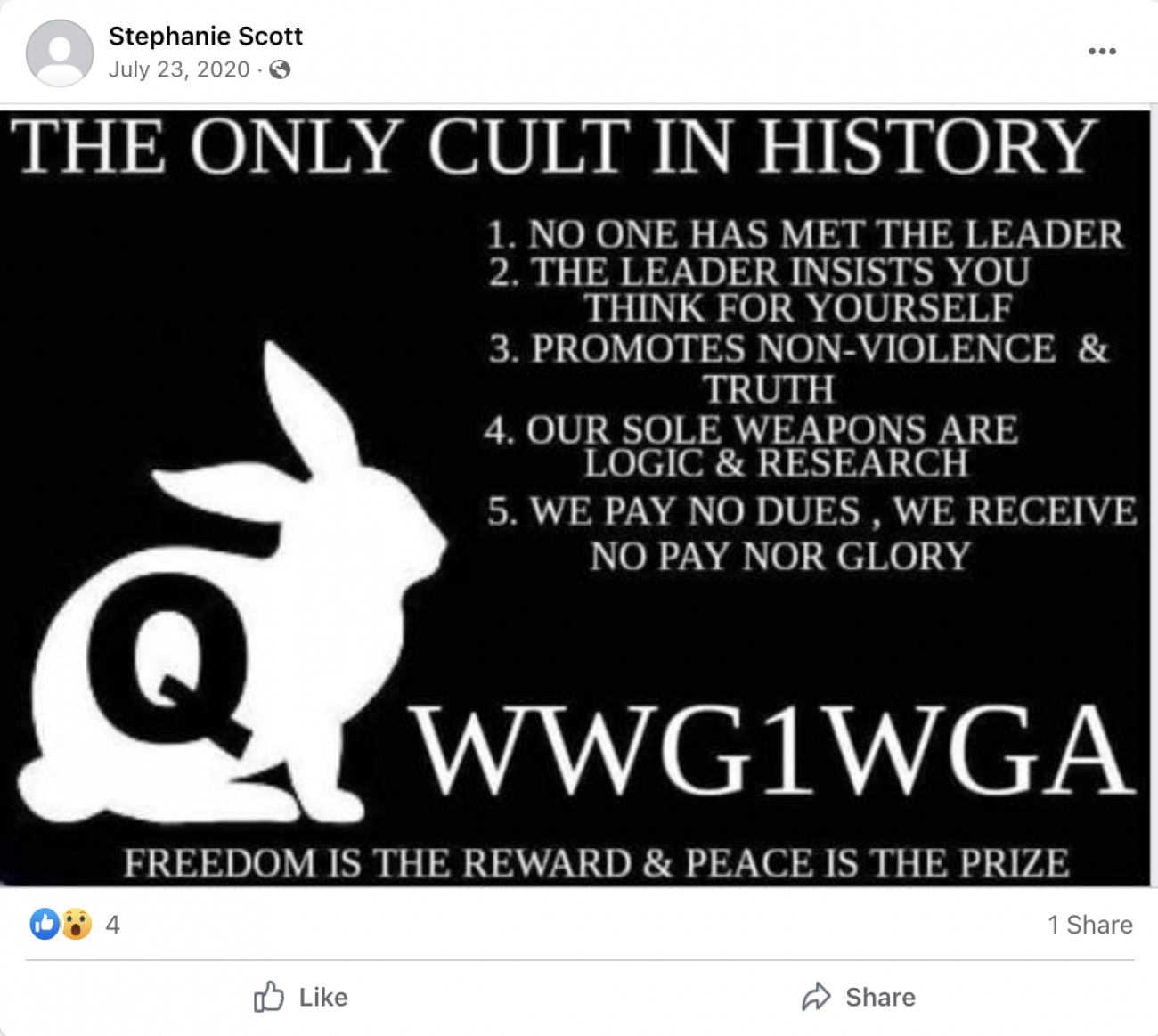 The first-term Adams Township clerk, who took office this year, did not respond to a voicemail or follow-up text message about her Facebook posts, including QAnon logos she appeared to delete this week.

But QAnon references remain sprinkled throughout her Facebook profile, including posts alleging liberal pedophilia and several that include the conspiracy theories’ rallying cry “WWG1WGA,” or “where we go one we go all.”

On Nov. 9, six days after the 2020 election won by Democratic President Joe Biden, Scott posted a link to election fraud theories from former state Sen. Patrick Colbeck, R-Canton Township, and added her own commentary: “This isn't over.  WWG1WGA.”

The same day, Scott criticized a National Public Radio fact check that disputed Trump’s claim Biden was “rushing to falsely pose as the winner” because the results had not yet been certified, a process that Congress and Vice President Mike Pence would conclude on Jan. 6 despite riots at the U.S. Capitol.

“WAKE UP AMERICA,” Scott wrote. “Media does not declare election results.  States aren't certifying because they they (sic) will be held legally liable for the results they sign their names to.  WWG1WGA”

The FBI in 2019 labeled QAnon a potential domestic terrorism threat, a description adherents have contested as the movement has become increasingly prominent.

State Rep. Daire Rendon, R-Lake City, wore a QAnon pin to a recent rally at the Michigan Capitol and told The Detroit News that Q is "the highest level of security in the federal government."

Kristina Karamo, a Trump-endorsed candidate for Michigan Secretary of State, spoke at a QAnon-linked conference last weekend and posted a logo with QAnon references to her own Facebook page. But her campaign told Bridge Michigan that Karamo does not believe in the conspiracy theory.

At the “Patriot Double Down” in Las Vegas, Karamo and election candidates in four other states announced they are part of a "coalition" working with Trump loyalist Mike Lindell and others on a plan to tighten voting rules, including a ban on mail-in ballots that are currently guaranteed in the Michigan Constitution.

Scott, the Adams Township clerk, in February posted on Facebook a series of Lindell videos purporting to prove “election fraud and the theft of America.”

That month she also posted a meme suggesting Google is involved in harvesting "adrenochrome" from children, a reference to the false QAnon conspiracy that celebrities essentially drink kids’ blood in satanic rituals to obtain a chemical compound that produces a psychedelic high. 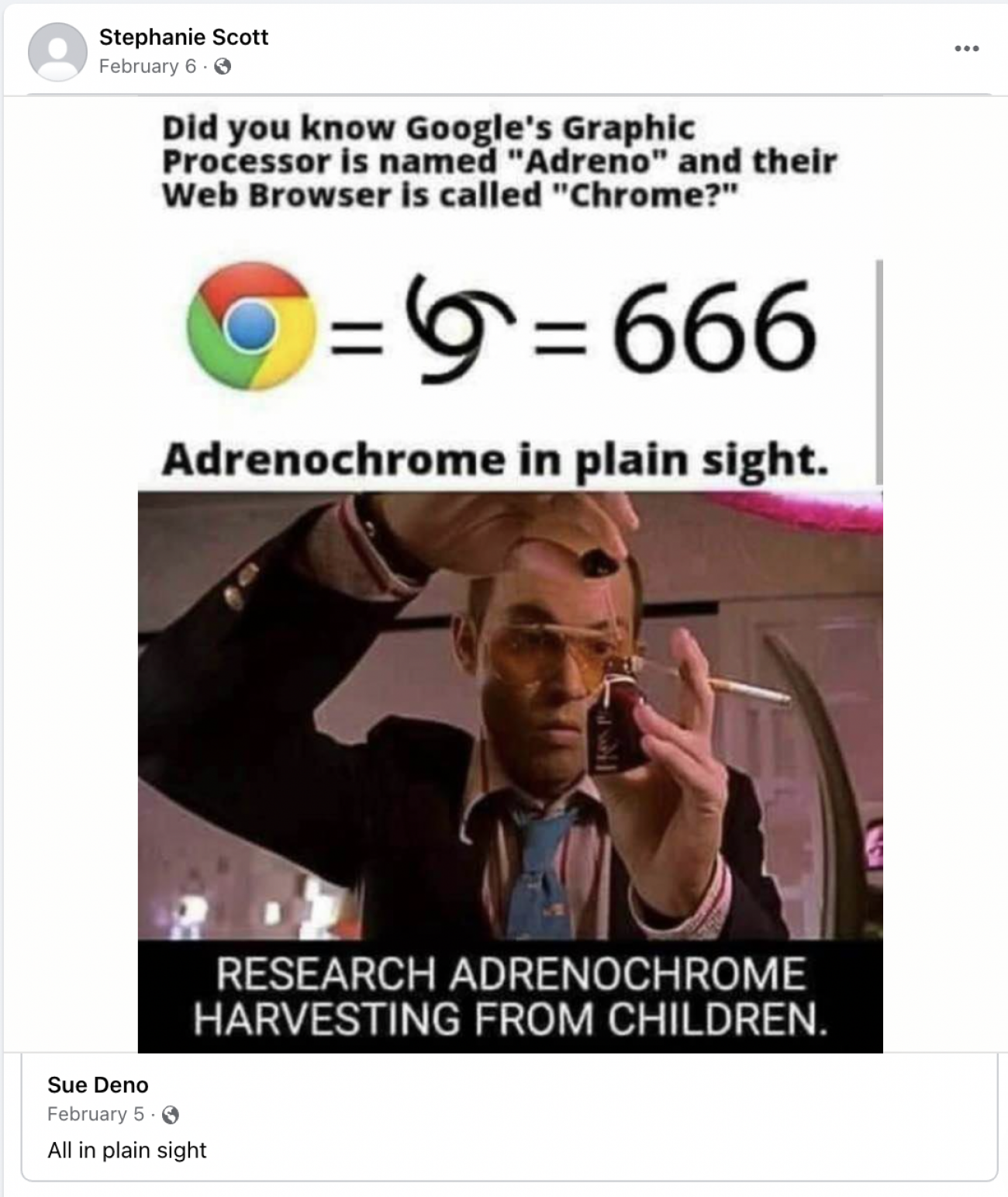 Scott’s posts related to QAnon date to before the 2020 contest, in which she was also elected but ran unopposed.

In July 2020, Scott shared a meme disputing that QAnon is a “cult,” instead describing it as a peaceful movement whose "sole weapons are logic & research."

More recently, Scott in April again posted the “WWG1WGA” slogan while sharing a pro-Trump video that included tweets in which the former president falsely claimed the election was rigged by “suprise ballot dumps” in cities like Detroit.

Michigan's Republican-led Senate Oversight Committee spent months investigating the 2020 election and found no evidence of widespread fraud. Instead, the committee debunked various conspiracy theories about the presidential election and said citizens "should be confident in the results."

Kast, the Republican Hillsdale County clerk, said she is not active on Facebook and is not familiar with Scott’s posts or the QAnon conspiracy theory.

She too has concerns about the 2020 election, Kast said, but those are limited to “large Democratic cities” that appeared to follow a “playbook” last year.

“In this county, there’s no concern,” Kast said. “I run a tight ship here.”

The Hillsdale County Republican Party supports Scott, according to Secretary Jon Smith, who said he is not sure whether the state actually had the authority to shift election authority to the county.

If Scott suspects her voting machine is inaccurate or otherwise compromised, there should be some mechanism to investigate those fears, Smith told Bridge.

Smith said he was unaware of Scott’s Facebook posts, telling Bridge Michigan he has “never followed” QAnon and considers it “a distraction.”

Because of the missing equipment now under investigation, Hillsdale County officials who will run next week’s Adams Township election used their own machine to conduct a ballot accuracy test in a public hearing Wednesday night.

And that machine will be used to tabulate next week’s election, in which local voters will decide whether to renew a school operating millage, Kast said.

Scott had ignored state requests to confirm she would sign off on the accuracy test, which is part of the reason the state stripped her of election administration responsibilities, according to Brater.

But the sidelined clerk attended Wednesday night’s accuracy test and peppered Kast and County Deputy Clerk Abe Dane with questions about the tabulator, including whether it connected to the internet during elections.

At one point, Kast warned Scott she would “have you removed by a sheriff's deputy if you don't stop interrupting.”

Dane assured Scott that tabulators can only connect to the internet after polls close to transmit unofficial results. He showed observers how the machine asks to connect after all ballots are counted and results are printed on a paper tape.

“We tried to clear up some inaccuracies” about the voting equipment, Kast told Bridge on Thursday morning, acknowledging that Scott and other attendees appeared to remain skeptical.

“We tried our best.” 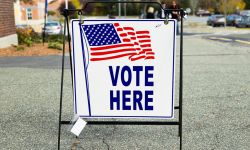