LANSING — Federal officials say six armed men and others piled into three vehicles late Sept. 12, traveling in the dark from a militia member's property in northern Michigan to Gov. Gretchen Whitmer's cottage about a half-hour away.

Those men, arrested and charged Thursday for conspiring to kidnap Whitmer before the November election, allegedly surveilled the governor's vacation residence and surrounding neighborhood in advance of a plot they hoped to finalize this week, according to an FBI affidavit.

"She f---ing g--damn loves the power she has right now," Adam Fox, who prosecutors alleged had hosted previous meetings at secret bunker below a business in Grand Rapids he worked at, allegedly told colleagues during the surveillance operation.

“She has no checks and balances at all," he continued in an apparent screed against executive orders the Democratic governor had issued to combat the COVID-19 pandemic.

"She has uncontrolled power right now.”

Prosecutors allege Barry Croft responded: “All good things must come to an end.”

On the way to Whitmer’s cottage, men in one of the vehicles allegedly stopped under a highway bridge on M-31 and looked for places to plant an explosive device, which they intended as a distraction to draw police from the vacation home and leave the governor exposed.

Prosecutors say they had already been working on it: Earlier in the evening, in a meeting secretly recorded by a government informant, Croft had allegedly used what he called a "chemistry set" to build an improvised explosive device with commercial fireworks, black powder, pennies and electrical tape.

The following morning, after completing the surveillance run, the group reconvened at a Luther property in Lake County owned by Ty Garbin, an alleged militia leader with a separate Hartland Township home that was raided by federal authorities late Wednesday.

There, prosecutors allege they discussed the cost of explosives and agreed to meet this week Wednesday to "make a final payment on explosives and exchange tactical gear" they intended to use in the plot.

Those meetings and others are described in an affidavit from FBI Special Agent Richard Trask, unsealed Thursday, that lays out a months-long conspiracy that included weapons training, meetings across three states and early talk of attempting to storm the Michigan Capitol.

Many of their meetings were secretly recorded by government informants and undercover agents.

Fox, Croft, Garbin, Kaleb Franks, Daniel Harris and Brandon Caserta were arrested this week. They are considered not guilty until proven otherwise but face up to life in prison if convicted for the alleged kidnapping plot. All are Michigan residents, except Croft, who lives in Delaware.

"Federal and state law enforcement are committed to working together to make sure violent extremists never succeed with their plans, particularly when they target our duly elected officials," Andrew Birge, U.S. Attorney for the Western District of Michigan, said Thursday in announcing the charges.

Those individuals allegedly called on militia members to identify the homes of law enforcement officers to target them, made threats of violence to instigate a "civil war" and trained for an operation to attack the Michigan Capitol and kidnap officials, including Whitmer, Nessel said.

Federal authorities began investigating Croft, Fox and others this year after learning about social media posts discussing the violent overthrow of government and law enforcement entities, according to the affidavit.

In a July 27 meeting at a Grand Rapids business, which was recorded by a confidential informant, Fox allegedly told co-conspirators that their best opportunity to abduct Whitmer would be when she was either departing or arriving at her Antrim County cottage or the governor’s official summer residence on Mackinac Island, according to the affidavit.

Fox described it as a “snatch and grab, man,” according to the affidavit. “Grab the f--ing governor. Just grab the bitch. Because at that point, we do that dude — it's over."

In at least one instance, conspirators met in the basement of Fox’s shop in Grand Rapids, which was accessed through a trap door hidden under a rug, according to the affidavit. Fox gathered cell phones from all attendees to ensure secrecy, attorneys allege.

The affidavit lays out a series of meetings involving various members of the plot, including gatherings in Ohio and a firearms and combat training in Wisconsin, where Barry Croft and a member of the unnamed militia group allegedly attempted to build an explosive device using black powder, balloons, a fuse and BBs for shrapnel.

At the late July meeting in Grand Rapids, Fox said the group “would remove Whitmer to a secure location in Wisconsin” for a trial of some sort.

In previous meetings, members had called Whitmer a “tyrant,” echoing complaints over her COVID-19 business closures.

Directly above me, men with rifles yelling at us. Some of my colleagues who own bullet proof vests are wearing them. I have never appreciated our Sergeants-at-Arms more than today. #mileg pic.twitter.com/voOZpPYWOs

In a July meeting in Ohio, Garbin allegedly said he did not want to attack the Capitol but was “cool” with going after the governor’s vacation home, even if it only resulted in property destruction.

Talks eventually began to focus on action at the governor’s official and personal residences.

At one tactical training exercise in Munith, south of Lansing, a man named Daniel Harris allegedly suggested “one person go to her house. Knock on the door and when she answers, just cap her.”

The men were expected to meet on Wednesday to "make a final payment on explosives and exchange tactical gear," according to the affidavit.

The federal felony conspiracy kidnapping charges filed against each are punishable by up to life in prison and a fine of up to $250,000.

In rural Munith, 15 miles north of Jackson, the home where two of the alleged militia members lived was in disarray Thursday afternoon. A woman who described herself as a family friend told a Bridge reporter that a shattered window on the side of the home happened during a raid just after midnight on Thursday morning.

Outside, a Confederate flag fluttered along with a Betsy Ross-style flag with “liberty or death” emblazoned in the space inside the circle of stars. The yard was littered with old furniture, children’s toys and other belongings. Car tires were piled on one end of the house.

The home is adjacent to a campground where visitors said they heard helicopters buzzing overhead for more than two hours the previous night.

One neighbor interviewed said he was happy to see authorities taking action, noting that the activities taking place at the raided home had troubled him. “They’re not the only morons around here,” he said.

The neighbor, who asked that his name not be used to protect his safety, said the people living in the home had moved in two or three years ago and “it slowly became the cesspool that it is now.”

Three months ago, he said, roughly 20 people showed up in military fatigues carrying firearms and gathered in the yard. At least twice in recent months, he said he had called police after hearing what sounded like machine gun fire coming from the property.

“They never came out,” he said of police, instead telling him that what he heard was likely something other than gunfire.

The neighbor’s recollections loosely match the sworn statements of federal authorities, who said the people charged in the alleged conspiracy conducted tactical training exercises in Munith on June 28 and again on Aug. 9.

The woman who identified herself as a family friend told Bridge that the nine people (six adults and three children) living in the home are now “homeless” following the raid. “I have no clue what they are going to do,” she said.

She said she was speaking for the family because “I’m probably the most calm person you’re going to talk to. Everybody is worked up.”

Things were calmer Thursday afternoon along the quiet, tree-lined street in northwest Michigan where Governor Whitmer’s family has a modest lakeside cottage. No vehicles were in the driveway and a few people walked along the road.

“This is horrible,” said one woman, a retired teacher who lived on the lake, of the alleged plot. (Bridge Michigan is not identifying the woman or the lake to protect the governor's security.) “I was very upset when they came to the Capitol with guns," she said of armed protests over the governor's lockdown restrictions during the pandemic. "Now this.”

"All of us in Michigan can disagree about politics," Detroit U.S. Attorney Matthew Schneider said Thursday, "but the disagreements must never, ever amount to violence." 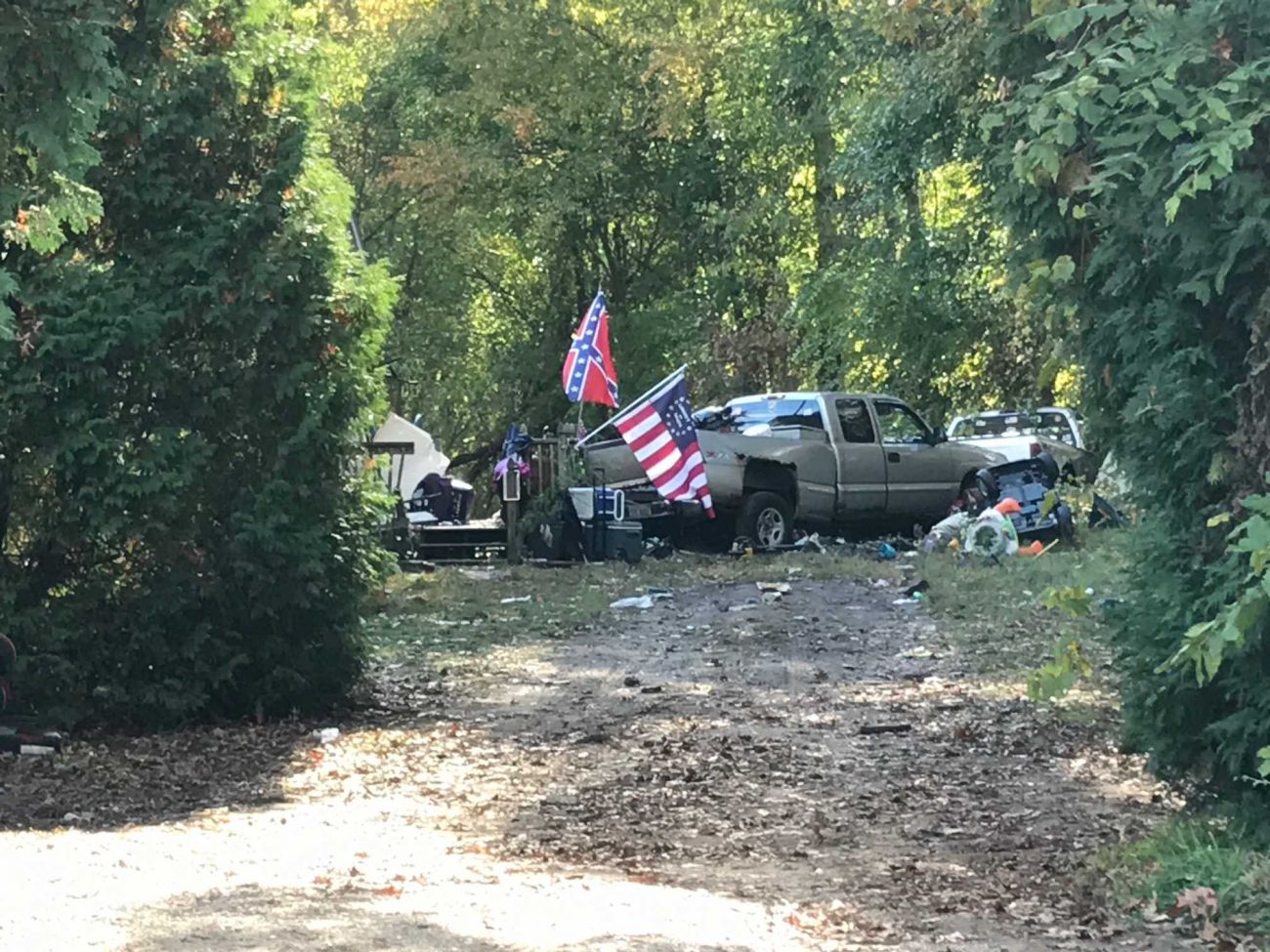 In rural Munith, 15 miles north of Jackson, the home where two of the alleged militia members lived was in disarray Thursday afternoon. A woman who described herself as a family friend told a Bridge reporter that a shattered window on the side of the home happened during a raid just after midnight on Oct. 8, 2020. Outside, a Confederate flag fluttered along with a Betsy Ross-style flag with “liberty or death” emblazoned in the space inside the circle of stars. The yard was littered with old furniture, children’s toys and other belongings. Car tires were piled on one end of the house. (Bridge file photo)