The weeks leading up to Tuesday’s election were rife with hand-wringing: fears of gun-toting poll watchers, long lines and misinformation paired with an ongoing pandemic that added to the uncertainty.

But Tuesday’s election was remarkably calm but busy, as clerks statewide reported few issues at polling places amid what is likely to be record-breaking turnout.

Around 10 p.m., Secretary of State Jocelyn Benson reported 3.3 million absentee ballots had been returned statewide (doubling the 1.6 million at the August primary) and said she expects 2 million to 2.5 million in-person votes. 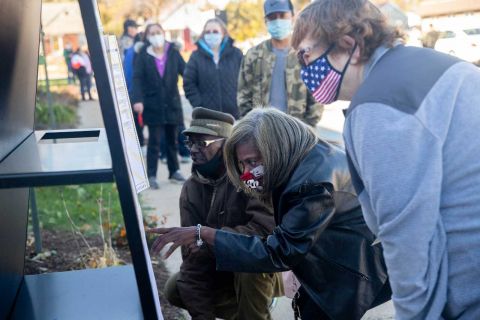 “Things went incredibly smooth. Where there was an issue, it was resolved quickly. Voters who needed assistance were directed to where they could receive it. Polling places remained healthy and calm places for people to go,” Benson said.

“We witnessed and experienced history today.”

Full statewide results are unlikely until at least Wednesday because of a surge in absentee ballots, which take longer to count.

That’s “probably the highest turnout that we’ve had in more than 20, 30 years in the City of Detroit,” said Daniel Baxter, an election consultant and former director of elections for the city.

Despite fears of voter intimidation and Benson’s failed efforts to ban the open carry of guns at polling places, clerks who spoke with Bridge Michigan said they heard of no issues.

“It was remarkably calm,” Ottawa County Clerk Justin Roebuck said. “There were no open-carry incidents whatsoever, there was no violence at any locations." 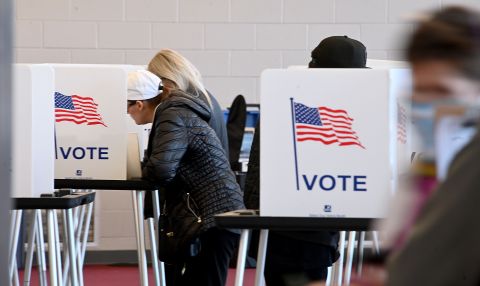 Benson’s gun ban was overturned in a lawsuit brought by gun rights groups such as Michigan Open Carry, whose president, Joey Roberts, accused Democratic officials of using the threat of voter intimidation to “exploit their political agenda.”

“Our members were just looking at basic self protection and exercising the right to vote,” he said. “I’m not surprised that there were not any issues.”

In Saginaw, election inspector Tammy Jackson agreed. Despite long lines and rush in the morning and late afternoon, the day was calm.

“I think [the media] got everybody worked up for nothing,” she said.

The historic turnout was felt across the state, from big cities to tiny townships. In fact, smaller towns reported some of the longest lines, as Trump supporters packed the polls.

“It seems like we usually get breaks and lulls,” said Alayna Alexander, clerk of Butman Township in Gladwin County, just north of Midland. “But not this year.”

Voter registration in the state topped 8.1 million by Election Day, with nearly 400,000 added since June — and that’s not counting the thousands who registered at the polls. 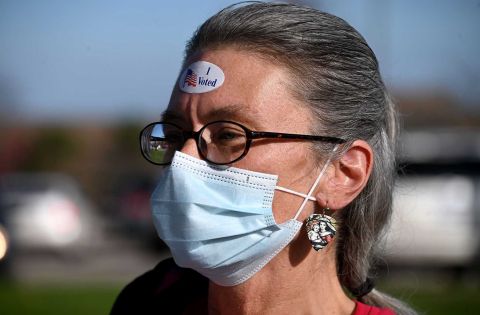 Statewide, some 28,000 people registered to vote on Tuesday, most of whom were in Detroit, Ann Arbor and Grand Rapids.

“We had longer lines than I’ve ever seen,” said Dana Boomer, clerk of Kasson Township in Leelanau County. Kasson has voted the same way the country has in the last four elections, supporting Trump and former presidents Barack Obama and George W. Bush.

On Tuesday, nearly 80 percent of the community’s voters cast ballots, either in person or absentee, up from 75 percent in 2016.

“This is going to be a historic election for us,” Boomer said.

But casting a pall on Election Day was the coronavirus that many said influenced their vote: Voters were asked to wear masks — some refused — and practice social distancing.

One voter walked into Grant Township’s precinct in Clare County late Tuesday and declared “I have COVID.” Tammy Teall, the township clerk, directed him back to his car, where he voted curbside.

“It's a great story that I'm thankful for,” Miller said. “We were bracing for the worst and it was a delightfully uneventful day.”

The few wrinkles were in largely Democratic cities, as Flint voters were targeted with robocalls suggesting they vote Wednesday, the day after the election.

In Flint and Grand Rapids, some voters received calls warning they could be arrested for warrants if they voted in person, which is untrue, state officials said. In Dearborn, some voters received messages claiming that problems with machines would make them vote for Trump if they favored Democrat Joe Biden.

“Bad actors sought to misinform our voters about their rights today,” Benson said. “None of that had the intended effect” because voters reported it and the state launched investigations into the misinformation.

Benson said they made public every report of misinformation they received.

“I’m appalled that someone else would do that to stymie the vote of the citizens of Flint,” said Flint City Clerk Inez Brown. Brown said she doesn’t know whether it deterred any voters from coming into the polls. “Hopefully it was nipped in the bud.”

— Jonathan Oosting contributed to this report.