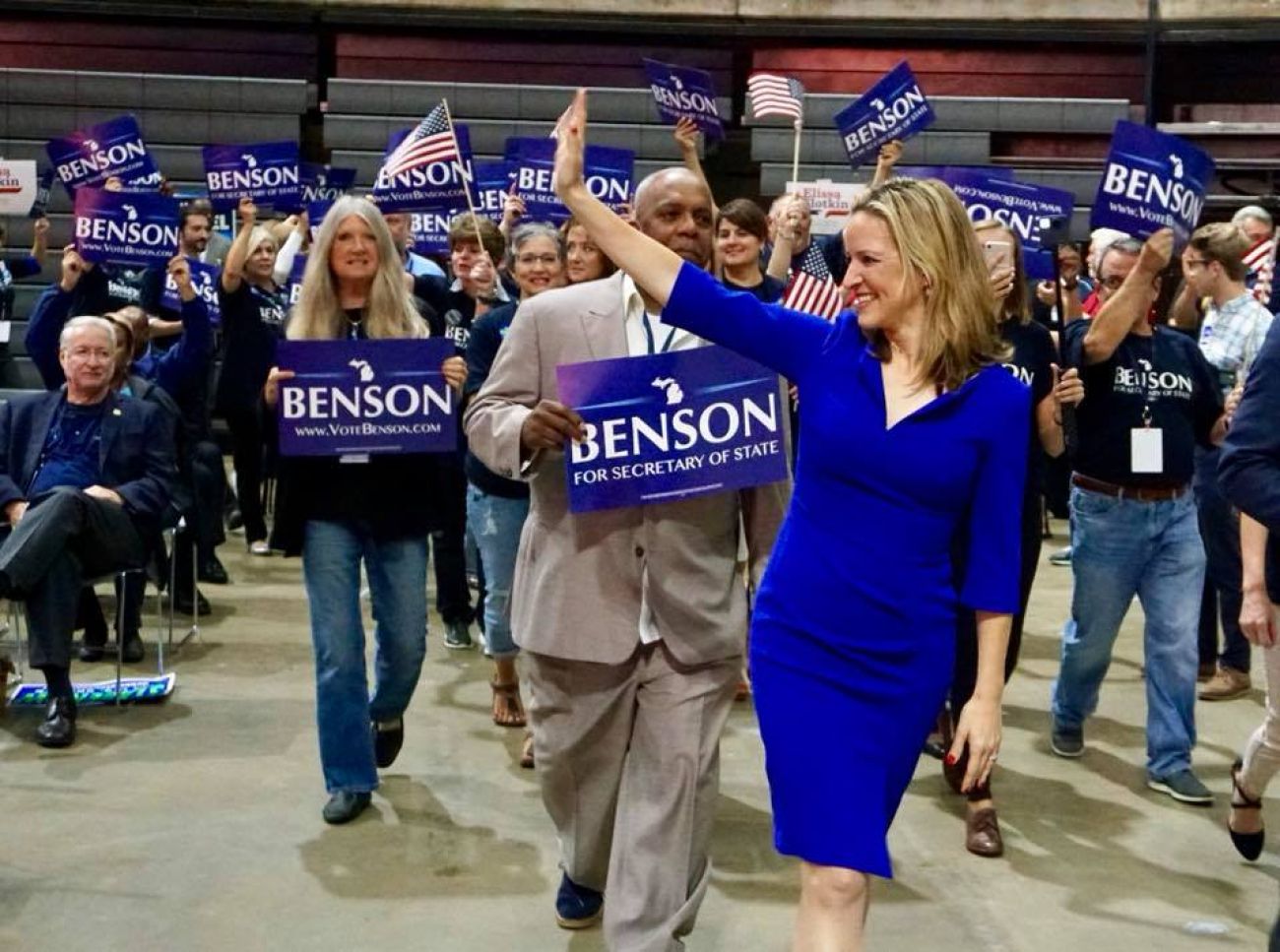 Democrat Jocelyn Benson is making her second run for Michigan secretary of state, losing in 2010 to eventual two-term winner Ruth Johnson, a Republican.

Benson, 40, wrote a book about secretaries of state in 2010 and highlights her tenure as dean of the Wayne State University School of Law from 2012 to 2016.

Cost cuts there allowed the university to freeze tuition, said Benson, who added she would lower costs at the secretary of state and fight efforts to raise license and driver fees unless there’s proof the revenues improve roads.

Benson is now the CEO of the Ross Initiative in Sports for Equality (RISE), a venture by professional sports organizations to improve race relations. She has an undergraduate degree from Wellesley College and a law degree from Harvard University. She lives in Detroit with her husband and their son.

Benson faces Republican Mary Treder Lang in the Nov. 6 election. Both are calling for shorter waits at the state’s 132 branch offices.

Bridge Magazine recently interviewed both candidates. The conversation has been edited.

Jocelyn Benson: What's working in other states is, No. 1, we do have to start with a goal, we have to define what it would mean to have shorter wait times and what that would actually look like, so that we have something that we're all working together to try to reach and define our success. So that's why I've talked about this 30-minute guarantee.

(Benson is calling for studies to identify ways to shorten visits, possibly incorporating a greeter to “triage” visits and direct better customers. She also wants to add online services, including some via smart phone, and adding satellite kiosks at libraries, banks and other retail outlets. She’s also calling for multi-year license plates.)

Bridge: What are the impediments to shorter visits and what makes you think that you can overcome those?

Benson: I do think there is a tendency, a leadership style that that I do not share to sort of move slowly. I like to get things done. … I know that one major difference between efficiencies in the private sector and government can often be cost and bureaucracy is oftentimes resistant to change. I'm a leader that like to push for bureaucracy to change.

(Benson pointed to her work at Wayne State, where she made budget cuts the led to tuition freezes, among other reforms.)

Bridge: Regarding elections, what reforms would you push for?

Benson: We need to have a measured approach to expanding access to the vote, as well as increasing the security of our elections on the on the expanding access to vote. Certainly things like early voting and no-reason absentee voting and also something that I talked a lot about protecting the voting rights for military personnel.

(Benson said she would work with other state’s secretaries of state to identify best practices so that Michigan “voters are engaged and informed and turn out.” She also wants to improve poll worker training and work with local clerks  to expand the pool of poll workers. She suggested that more employers give their workers the day off so that they can work the polls. But she also wants to make it easier to get rid of bad poll workers and make it a felony to tamper with voting equipment.)

Bridge: The candidates disagree on the two election-related ballot issues. Proposal 2 calls for the creation of an independent commission to redraw legislative boundaries after the 2020 Census, a role currently administered by the Legislature. Proposal 3 would make voting registration and voting easier by allowing Election Day registration, no reason absentee voting and allow voters to resume voting straight ticket. How will you vote?

Benson: I am going to be voting for both.

(As an election law attorney who said she has a “deep background” in redistricting reform, Benson said she would be ready to implement the two proposals.)

Bridge: How do you feel about Treder Lang claiming that the removal of over 500,000 deceased voters from the rolls helped President Trump win Michigan?

Benson: I think the voter rolls need to be accurate and we need … a secretary of state who is not beholden to any partisan agenda and is operating that office with an eye towards what's best for all voters, not one particular outcome or group of voters. And so statements like that seem to call into question her impartiality, which I think is critical for a secretary of state to have.

Bridge: The secretary of state also compiles and maintains campaign finance records. Does transparency have to improve?

Benson: This is a serious office (and) the choice of the next secretary state of Michigan will define our democracy for years to come. And so I'm working to just stay focused on the issues and talk about how Michigan can do better we can be a model for fair elections and clean elections and also talking about the need to clean up the role that dark money does have in our elections. I've been the only candidate that's been talking about the need to have instant disclosure of all money and the political process. I think people have the right to know when money is being spent to influence their vote or influence their elected officials. And so I will be a secretary of state to champion that transparency and disclosure.