A poll challenger who rose to prominence after questioning the legitimacy of Michigan’s 2020 presidential election is now the Republican Party’s presumptive choice in the campaign  to determine who runs the next one as Secretary of State.

Until recently, Kristina Karamo, 36, was relatively unknown in Michigan politics outside of Oakland County, where she volunteered in state and local roles and unsuccessfully ran for a county commissioner seat.

Then the Oak Park Republican skyrocketed to fame in conservative circles after claiming she witnessed fraud at Detroit’s absentee counting board while working as a poll challenger in November 2020.

Karamo, a community college instructor and mom of two, was interested in politics and social issues long before that, however, espousing her views on the Christian faith, education, the role of government and sexuality on her website and podcast.

In episodes of a podcast she started before announcing a campaign for statewide office, Karamo referred to herself as an “anti-vaxxer,” opposed the teachings of evolution in schools, likened abortion to human sacrifice and said LGBT people and those who have sex outside of marriage “violate God's creative design” and are indicative of a culture of “sexual brokenness.”

But it was Karamo’s allegations about the 2020 election and media appearances that made her a key figure in former President Donald Trump’s movement to overturn his election loss to President Joe Biden and ultimately earned Trump’s endorsement after she announced her candidacy for Secretary of State.

Her nomination won’t be official until August, but the party is treating winners of the endorsement convention as official nominees so they can begin campaigning for the November general election.

As a candidate, Karamo has frequently called for a “forensic audit” of the 2020 election, and during Trump’s recent visit to Michigan called election integrity a “national security issue.”

Speaking at the convention on Saturday, she said Trump’s support was “massive” to her victory, and she vowed she won’t change her campaign message.

"People just want to make sure they have clean elections, good services, that their SOS branch offices and all the other Secretary of State responsibilities are ran fairly." she said.

Democrats were quick to condemn her, with Party Chair Lavora Barnes issuing a statement saying that as “someone who peddles in conspiracy theories, denies the 2020 election results and spreads lies about the Jan 6th insurrection, Kristina Karamo shouldn’t be allowed within 100 miles of the Secretary of State’s office.”

Prior to her candidacy, Karamo has worked as an instructor at Wayne County Community College, where she taught public speaking and college orientation courses, and as a live trivia host.

She graduated from Oakland University with a bachelor’s degree in communications and later earned a master’s degree from Biola University in La Mirada, California, in Christian apologetics, the study of facts to defend Christian theology. 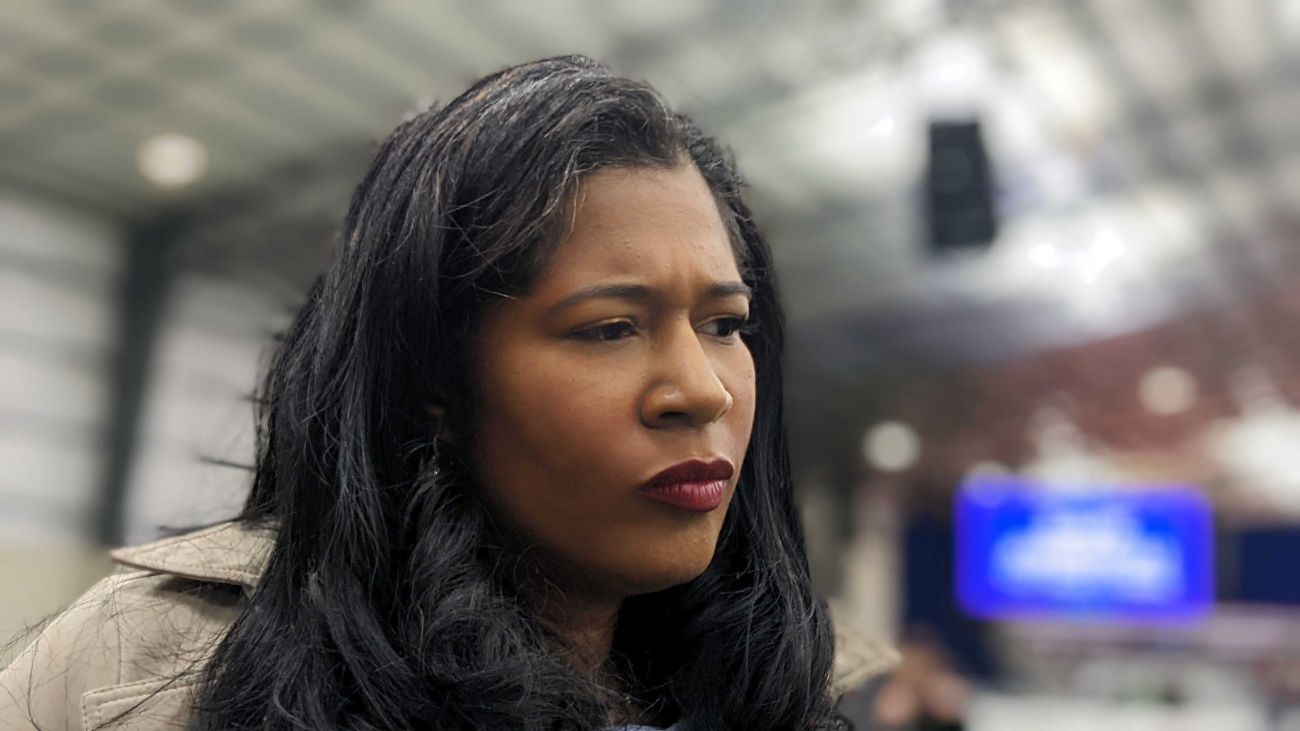 Kristina Karamo is a close ally of former President Donald Trump and until recently was best known as a grassroots Republican Party member. Her candidacy for state Secretary of State has now been endorsed by the Michigan Republican Party. (Bridge photo by Jonathan Oosting)

Karamo has volunteered in local politics, serving as communications chair for the Oakland County Republican Party, and as a member of the Michigan Republican Party State Committee and the Black leadership committee of Right to Life Michigan.

In 2018, she unsuccessfully ran to serve as Oakland County Commissioner for the 10th District, pulling in less than 40 percent of the total vote in the Republican primary.

Rocky Raczkowski, chair of the Oakland County Republican Party, called Karamo a “longtime friend” and said the state would be lucky to have her as Secretary of State.

“People underrate her and the Democrats attack her, but for the state of Michigan, she’s…one of the best candidates and most articulate candidates I’ve seen in a long, long time,” he told Bridge Michigan.

“Cut through all the BS of politics and dissect her heart and her brain, and you will find an incredible, incredible individual.”

Karamo was a podcaster prior to her Secretary of State run. On the first episode of the show, “It’s Solid Food,” released in July 2020, Karamo said she was interested in politics because “there is not a part of your life that politics does not dictate.”

She said one example of that was vaccinations, calling herself an “anti-vaxxer” and arguing that where a person lives can determine whether they can exempt their children from vaccination requirements.

Karamo also outlined her views on abortion in the episode, saying the United States would face judgment for abortion and likening people who support abortion access to those in ancient societies who sacrificed children.

“If you fast forward now, that’s the same thing people are doing with abortion —  they’re just sacrificing their kid to the god of self,” she said on the podcast.

In another episode, Karamo shared her thoughts on society’s “sexual brokenness,” claiming that LGBT people in same-sex relationships are “just as guilty of eternal damnation as the person being a fornicator, but the bigger danger is that that relationship can never be made right.”

“When we have a federal government and we have judges trying to bind people into sexual brokenness, forever, that is nothing more than the work of Satan,” she said.

Karamo’s rise to the statewide spotlight came in the aftermath of the 2020 election when she came forward to attest to witnessing wrongdoing at Detroit’s absentee counting board, submitting an affidavit on an “incident report” document cited in a lawsuit seeking to overturn the official results.

Among other things, Karamo claimed that an election supervisor told a clerk to “push through” contested ballots that favored Democrats and that ballots were delivered between 3 a.m. and 3:30 a.m., a claim that has been widely debunked.

She testified before a state Senate committee about her experience — the panel later reported finding no evidence of widespread fraud — and made several media appearances spreading the claims.

In one podcast episode, Karamo alleged “egregious crimes” were committed, adding, “It's time for us decent people in the Republican Party...to fight back. We cannot have our election stolen.”

“Jocelyn Benson refused to investigate our claims, then the lackeys in the media parroted her lies,” Karamo wrote on social media.

Karamo also attended events around the country to speak on the issue. She visited Arizona during the state’s audit of its election results and spoke at the "For God & County: Patriot Double Down" conference, which was connected to prominent QAnon conspiracy theory adherents — although Karamo’s campaign said she personally does not support it.

Numerous official reviews, investigations and court rulings have affirmed the election results, which showed Biden won Michigan by 154,188 votes. A Michigan-led Senate committee report concluded there is no evidence of widespread fraud.

She counts herself among the “America First” coalition of Trump-aligned Secretary of State candidates who supporters say will fix election issues and critics claim would find a way to guarantee Trump wins if he seeks re-election.

During a rally in Washington Township, Trump brought Karamo and DePerno onstage, calling the attorney general and Secretary of State positions vitally important for “making sure Michigan is not rigged and stolen again in 2024."

Karamo was the top fundraiser among Republicans for Secretary of State, bringing in just over $228,000 since starting her campaign with $133,000 left after expenses, per the latest campaign finance filings.

The Democratic incumbent, Benson, collected $1.65 million in campaign contributions during the same time frame and has $1.4 million in cash on hand.

Election officials have vehemently defended the 2020 process, and Benson has referred to the proceedings as the most secure in Michigan history.

In a recent media call, Benson referred to Karamo and DePerno as “election deniers” who want to “take over our statewide offices so that they can potentially be in position to block or undo or fail to certify election results that they disagree with in the future.”

She later called Michigan “ground zero” for threats against the democratic process.

Karamo has rejected characterizations that her views are “extreme,” writing on Instagram that the media slanders people as “conspiracy theorists” to “protect corrupt politicians.”

“According to the (Democrats,) I’m ‘extreme,’” Karamo wrote.  “This is coming from the people who want to perform sex changes on children, which will permanently sterilize them. Misogynists who want women to sit down & shut up while men take over our sports, and only speak to advocate for killing of our children.”

If elected, Karamo says she would continue investigating election fraud claims, but it would not be her sole focus.

According to her website, Karamo is leading a "research team" that is "investigating the 'governmental pathologies' which prevent the Office of the Secretary of State from operating according to the rule of law."

She also wants to thoroughly review voting machines used throughout the state and verify their security, telling reporters at the Trump rally that knowledge of exactly how the machines tabulate needs to be public.

“If more and more people see what’s happening, understand the process, then that will ease a lot of suspicion,” she said.

Karamo is also interested in reducing regulations at Secretary of State branch offices and would give branch managers “freedom to manage and take ownership of their branches to improve customer service,” according to her website.

Benson, the Democratic incumbent in the role, was officially endorsed by the Democratic Party this month. At the time, she told Bridge Michigan she considered disinformation surrounding Michigan’s election process the biggest challenge of her campaign.

“It is not hyperbolic to say that the future of our democracy is on the ballot this fall,” she told Bridge.