Liberal groups bury Michigan with mail shaming people to vote. Many hate it.

LANSING — The postcard looked friendly enough, with cartoon images of a Model T, cherries and pine trees inside an outline of the Mitten state and an encouraging message urging Michigan to “vote!”

But Leslie Figueroa was startled when she read the back.

“Who you vote for is a secret, but whether you vote is public information,” the postcard author told her. “After the election on Tues. Nov. 3, local organizations may follow up with you on your voting record.”

“I thought it was a threat,” said Figueroa.

The postcard included a paid-by disclaimer from the Indivisible Chicago Alliance, a liberal group that this fall organized a volunteer mail campaign to try to boost voter turnout in Michigan and Wisconsin.

But Figueroa, an Ann Arbor Democrat, said she initially feared it might be disinformation designed to discourage her from voting instead.

“I always vote, so they were threatening the wrong person, and I wasn’t even sure what they were trying to accomplish,” she said. “In my mind it was almost like reverse psychology.”

The postcard is an example of what experts call “social pressure” mail that can shock recipients but is considered effective and is being widely employed this year by third-party organizations seeking to boost voter turnout in battleground states like Michigan.

“Social pressure mailings can be short-handed as peer pressure in an envelope,” said Tom Lopach, CEO of a group called the Center for Voter Information, which has bombarded Michiganders with similar letters.

“They’ve been proven to be the most impactful at getting voters to the polls to vote.”

The message Figueroa received appeared to be a variation on the group’s national campaign to mail 2 million postcards to Michigan voters this cycle. A liberal activist from Oregon, for instance, told Bridge Michigan he and his family sent identical postcards to 100 Michigan voters.

Marj Halperin of Indivisible Chicago emailed Bridge Michigan a statement Monday evening after this story published, saying the postcards “encourage people to vote” using “language that has been tested and proven to do so.”

“This is a nonpartisan message that does not  ask or encourage anyone to vote for specific candidates,” she said. “The follow up referenced in the message is commonplace and refers only to follow up regarding the decision to vote, not to specific votes cast. Organizations use it to gain an understanding of why some people voted and others did not.”
The Center for Voter Information, a nonprofit based in Washington, D.C., has inundated Michiganders with official-looking mailings that compare their voting frequency to that of their neighbors, assign recipients a “voting score” and remind them that “how you vote is private, but how you vote is a matter of public record.” 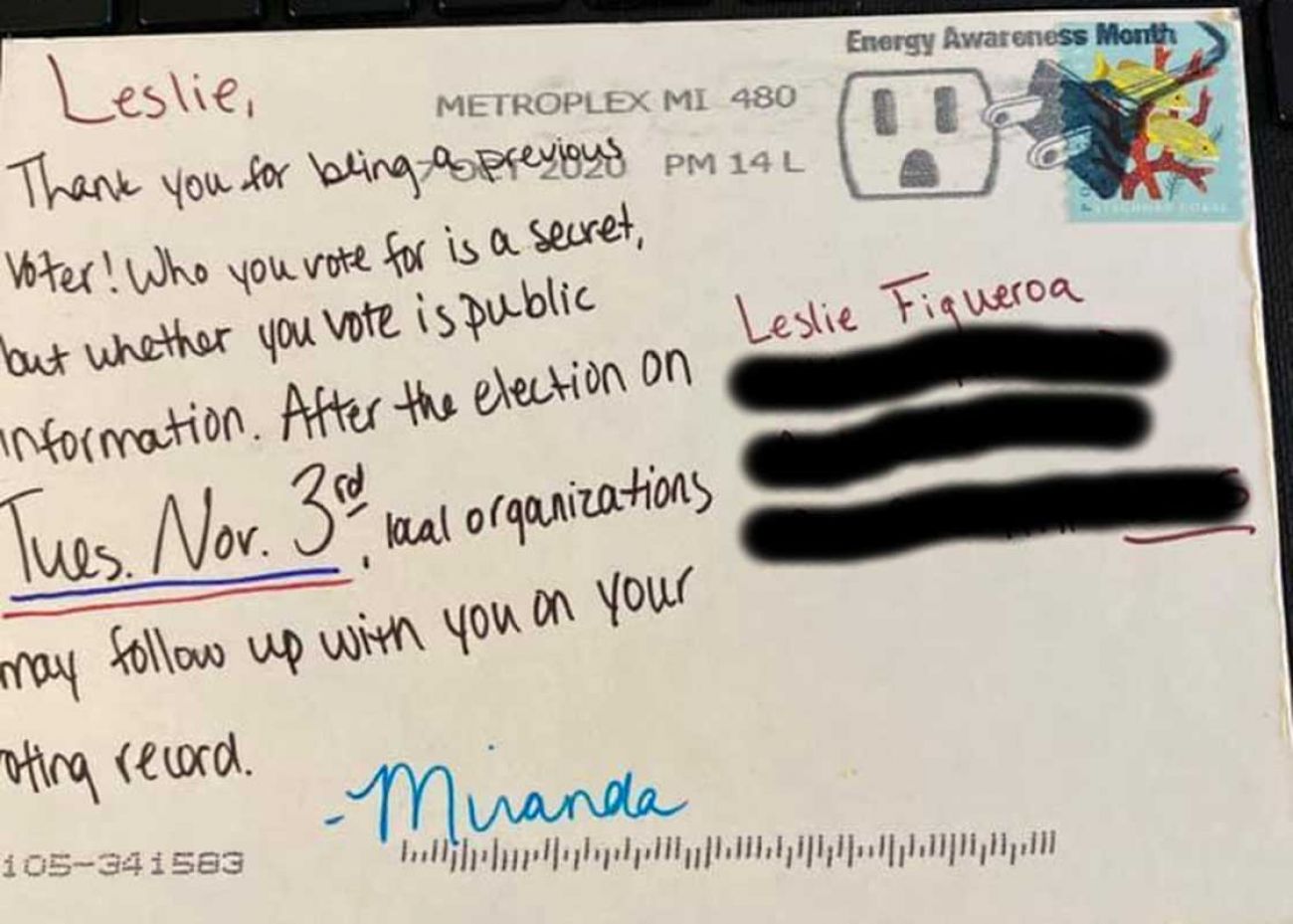 But she and other clerks say mass mailing by the Center for Voter Information are confusing voters and the letters can be mistaken as official government documents, which they are not.

Voters are phoning clerks to complain about the release of their voter participation records, which is public data available through the state, she said.

“We get calls with widows crying because we mailed their deceased husband information about their voter report,” Byrum said. “Well, it wasn’t us.”

In fine print, the letters allow recipients to opt out of future mailings by emailing a tracking number to the Center for Voter Information. That’s a step Lori Lynch of Lake Orion took after receiving four letters in a single day, she told Bridge.

“Having canvassed for candidates before, I know that [voter participation] data is publicly available, so I wasn’t completely shocked to see it.”

The Center for Voter Information, along with a sister nonprofit called the Voter Participation Center, claim to be nonpartisan but have deep Democratic ties.

Lopach recently served as chief of staff to Montana Gov. Steve Bullock, a Democrat, and CVI founder Page Gardner worked on Bill Clinton’s 1992 presidential campaign. Jill Alper, a Democratic strategist from Michigan, sits on the board of the Voter Participation Center, according to its website.

Both groups “run high-volume, direct mail and digital outreach to register voters, to help voters sign up for mail and to turn out voters,” Lopach told Bridge.

In addition to the social pressure mail, the Center for Voter Information claims to have sent registration applications to more than 3.4 million Michiganders this cycle and to helped more than 300,000 apply for absentee ballots.

The Voter Participation Center targets voters in what Lopach called the “rising American electorate”: People of color, unmarried women and younger people who tend to vote less frequently than other demographics.

The Center for Voter Information, meanwhile, “primarily targets voters that don’t fit within those populations but share the values of wanting to see those populations reflected more clearly in the electorate,” he said.

Although the demographic groups they target tend to support Democrats, Lopach said the organizations are nonpartisan and “do not use party affiliation to find people to mail,” which could jeopardize their nonprofit status.

They are not required to disclose donors and operate their massive mailing campaigns using “private contributions from individuals and families,” he said.

In April, an elderly Lansing man emailed her office to say the Center for Voter Information sent mail to his late wife, who died in 1989. In June, Alaiedon Township Deputy Clerk Virgnia Hoffman emailed the Ingham County clerk on behalf of another widower who received mail for his deceased wife.

“I'm hoping we don't get any more since some spouses have not adjusted well to losing their significant other, and mail for them is very upsetting especially when they shouldn't be receiving this,” Hoffman wrote.

The Center for Voter Information uses the state’s voter file to identify registered voters, Lopach said, but it’s not clear how often it purchases that list to ensure it is up to date. The group also uses commercial data lists to try and find the mailing addresses of unregistered voters, which can be less accurate.

In emails to Byrum’s office last year, an attorney with the Center for Voter Information said the group was attempting to work with its vendor, Catalist, to try and cross-check its contact files with death data from the Michigan Office of Vital Records, which are also public record.

“There’s always third parties that are mailing things, and they don’t have all the correct information,” said Oakland County Clerk Lisa Brown, who told Bridge that one local voter emailed her after receiving an absentee ballot request from the Center for Voter Information that was mailed to someone who had moved out of their house 20 years ago.

She questioned why the group sent absentee ballot applications to voters here this fall after Michigan Secretary of State Jocelyn Benson already took the rare step of doing so herself to encourage remote voting during the coronavirus pandemic.

“The bigger issue out there for local clerks is people applying for an absentee ballot multiple times” because they’ve been bombarded by mailers, Brown said.“Our clerks are not sending them send or third ballots, but it is creating more work.”

As for the social pressure mailings, Brown said she’s also fielded emails and calls from voters “upset” by the messaging.

“There are some voters who believe that these organizations know how they voted or are giving bad information, she said.  “Voting is very personal. I feel bad for the people who are upset by it and think that it’s real or that it gives them concern. We have enough to be worried about in this world.”