MUSKEGON — President Trump renewed his attacks against Michigan Gov. Gretchen Whitmer in a raucous Muskegon rally on Saturday evening, blasting what he called “draconian” COVID-19 safety regulations as his supporters broke into chants of “lock her up.”

The refrain came less than two weeks after state and federal authorities foiled an alleged militia plot to kidnap the governor and put her on trial for “treason” before the Nov. 3 election.

Whitmer, a national co-chair for Democratic challenger Joe Biden’s campaign, quickly criticized Trump’s latest commentary, calling it “exactly the rhetoric that has put me, my family and other government officials’ lives in danger while we try to save the lives of our fellow Americans.”

The governor last week urged Trump to dial down his rhetoric, but Trump wasted little time rejecting that request in his first visit to Michigan since the kidnapping plot was exposed.

“You’ve got to get your governor to open up your state, okay?” Trump said minutes after stepping off Air Force One and onto a stage at the Muskegon County Airport surrounded by bleacher grand stands, American flags and thousands of supporters.

“And get your schools open,” Trump said as the crowd began to chant “lock her up,” a rallying cry Trump supporters first used against Hillary Clinton in 2016.

The chant broke out again when Trump suggested that if Biden were elected, he would impose a “draconian lockdown, like your governor is doing right now for everybody but her husband.”

Trump did not join the chant but appeared to egg on supporters: “Lock ‘em all up,” he said in response. 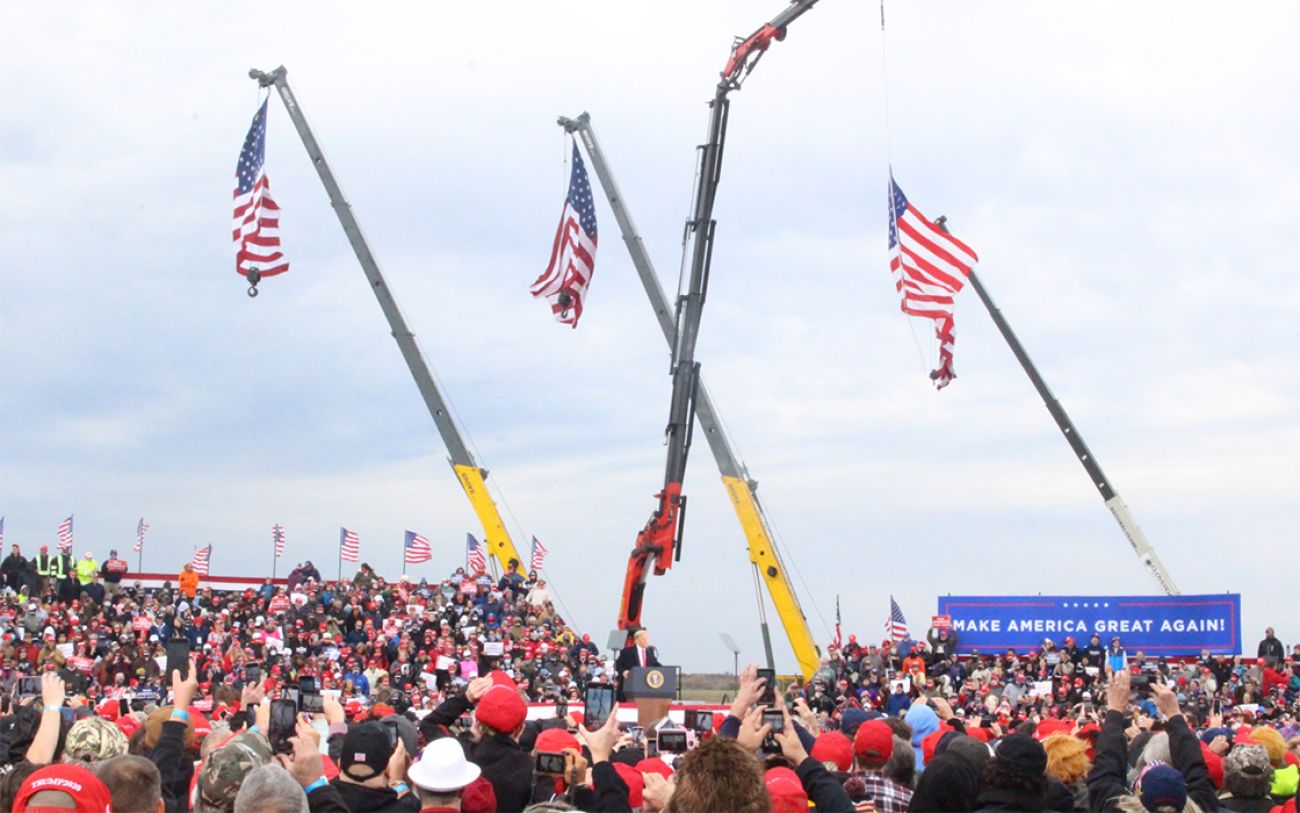 Trump’s claims, like others he’s made in recent weeks, do not reflect the actual state of COVID-19 orders in Michigan.

Michigan’s economy is already back open, albeit with capacity limitations for some businesses and other public safety regulations. Department of Health and Human Services Director Robert Gordon revived Whitmer’s safety rules this month after the state Supreme Court invalidated an emergency authority law the governor had used to issue orders of her own.

Many Michigan schools are open as well — but that’s a choice local districts are allowed to make under a law negotiated by Whitmer and the GOP-led state Legislature.

As for the governor’s husband, he name checked his wife in late May when he asked a marina if he could jump to the front of the line and get his boat in the water when Whitmer first relaxed regulations in northern Michigan. When the request became public, Whitmer called it a “failed attempt at humor” by her husband, a dentist who has been subject to the same regulations as other Michiganders.

Whitmer and Trump have repeatedly sparred over the coronavirus pandemic. She has criticized him for failing to coordinate a federal response, arguing he exacerbated the crisis and prolonged the national economic fallout. Trump has argued Whitmer went too far with her early lockdown order and other measures, at one point early in the pandemic encouraging protesters with a call to “LIBERATE MICHIGAN!”

Trump tested positive for COVID-19 in early October and was hospitalized for three days but has since pronounced himself recovered and returned to the campaign trail.  He’s one of more than 8 million Americans who have contracted the coronavirus this year. Of those, more than 219,000 have died, including 7,010 Michiganders.

But the president made little mention of the public health crisis in his Saturday night rally, which flouted state rules against large gatherings. His campaign called it a “peaceful protest.”

“Biden and the Democrats want to keep Michigan locked down, locked up and closed for business,” Trump said.

Whitmer staffers rose to her defense.

As the governor’s deputy digital director, “I see everything that is said about and to her online,” Tori Saylor wrote on Twitter during Trump’s speech. “Every single time the President does this at a rally, the violent rhetoric towards her immediately escalates on social media.”

Michigan House Speaker Lee Chatfield, a Levering Republican who warmed up the crowd before Trump’s speech, pointed out that the president himself did not chant “lock her up” about Whitmer.

“But others did and it was wrong,” Chatfield wrote on Twitter after the rally. “She was literally just targeted. Let’s debate differences. Let’s win elections. But not that.” 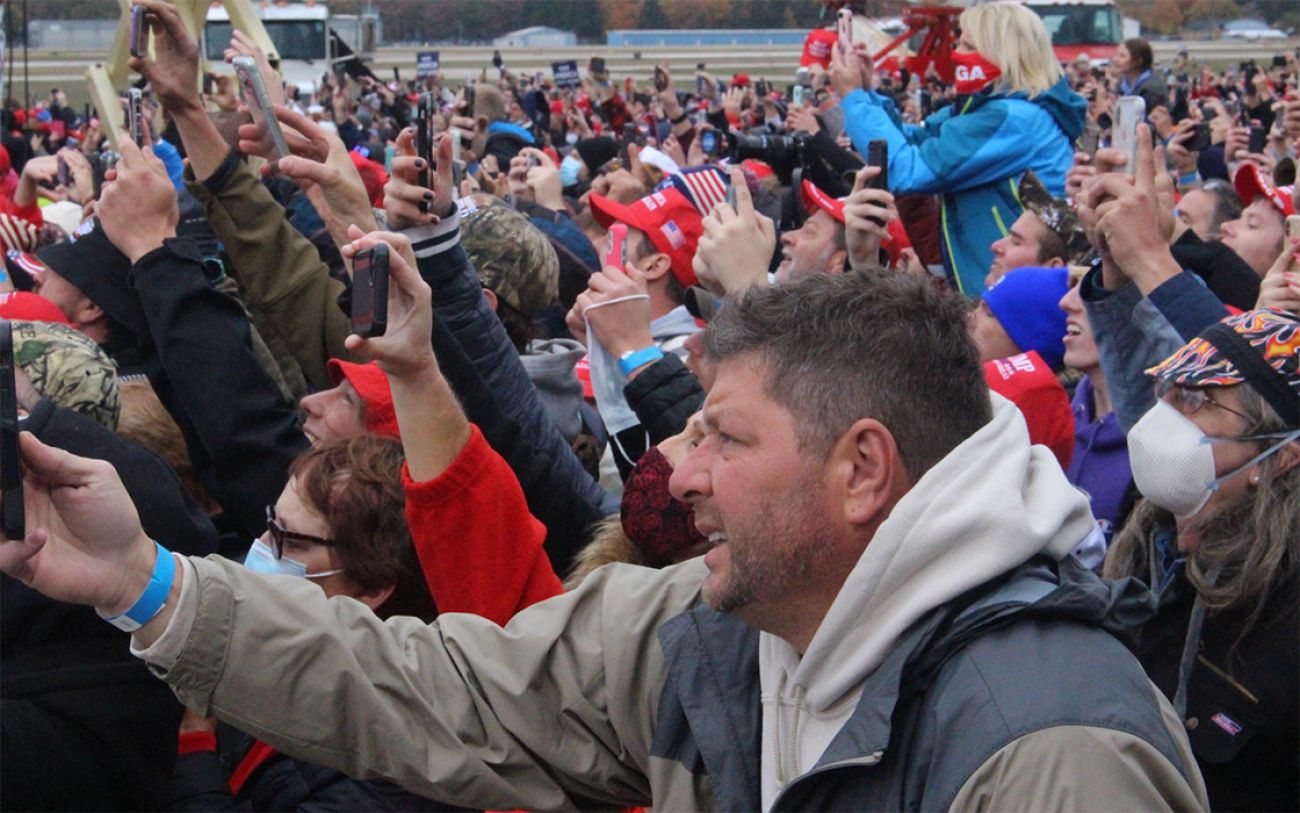 The president returned to familiar topics in his Muskegon speech, including a widely debunked claim that he was once named Michigan’s “man of the year,” an apparent reference to a 2015 speech at an Oakland County Republican Party dinner, whose chairman has denied he gave any award to Trump.

Experts say voter fraud is rare, but Trump again cast doubts on the security of mail-in voting and told supporters the Michigan Court of Appeals delivered a “huge victory for voting rights” with a Friday ruling prohibiting clerks from counting absentee ballots that arrive after election day.

In a state where cars still rule, Trump saved his biggest boasts for the auto industry -- and that’s an area where he has some clear victories to celebrate.

“We brought your plants back,” he told the crowd, suggesting “many” car plans are now being built or expanded in Michigan.

Fiat Chrysler is building its first new plant in Detroit in almost three decades and expanding other facilities, a $4.5 billion investment to create nearly 6,500 jobs.  Ford Motor Co. plans to renovate Michigan Central Depot in Detroit by 2022 and bring 5,000 employees to the city.

Waymo, the electric car company linked to Google, is building a factory in the Detroit area. And Navya, a French company that builds driverless shuttles, reportedly plans to build a small facility in Saline.

Trump is trailing Biden in Michigan polls with less than three weeks left before the election, but Saturday’s visit was the latest in a statewide blitz by the president and his campaign: Son Eric Trump spoke in Novi on Tuesday; Vice President Mike Pence spoke near Grand Rapids on Wednesday; and daughter-in-law Lara Trump, spoke in Saginaw County on Thursday.

West Michigan, a former GOP stronghold where Democrats have made inroads, remains a critical battleground for both campaigns. Hillary Clinton narrowly won Muskegon County in 2016, topping Trump by 1,117 votes as he won the state by 10,704 votes, the narrowest margin in Michigan history.

Biden is targeting Michigan as well in an attempt to reclaim the state for Democrats. He spoke in Grand Rapids earlier this month and then spent Friday in Southfield and Detroit, where he spoke at a drive-in rally, calling himself a “car guy” from a stage sandwiched between a Ford Mustang and a Chevrolet Corvette.

Basketball star and businessman Magic Johnson was set to campaign for Biden on Saturday in Detroit and Lansing. Jill Biden, the former vice president’s wife, is expected back in Michigan on Tuesday.

Trump is down in the polls, but “we saw that before” in 2016, noted state Sen. Roger Victory, a Hudsonville Republican who spoke to Bridge Michigan before the Muskegon rally began.  “The other side is not going to take it for granted, so I think it’s going to be a full-court press on both sides.”

Victory, a farmer, said Trump has not “forsaken” Michigan or its agricultural industry, which the president has heavily subsidized amid a trade war with China that had depressed crop prices. Commodity prices have rebounded, he said.

“We had some tough situations with negotiations with China, but he’s never turned his back,” Victory said of Trump. “He held right strong, and right now we’re starting to harvest the fruits of those negotiations.”

The president arrived at the Muskegon County Airport in theatrical fashion. Fans roared when his incoming flight was announced via air traffic control audio, and again when Air Force One touched down and circled the tarmac before parking for Trump to emerge.

In the crowd, supporters wore a familiar mix of red, pink and camouflage MAGA hats. Several draped themselves in Trump flags. Some wore face masks, but many did not.

Many waited hours, and battled occasional rain on a chilly fall day, to see the president they hope to re-elect. Among his staunchest supporters, few could identify any faults with Trump.

Paul Berry of Muskegon Heights didn’t wear any Trump gear to the rally but said he had nothing to prove because the president already has his vote. He was upbeat about the direction of the country despite losing his factory job at an auto supplier in March when the pandemic first hit Michigan. His wife was laid off from her job at Walmart, he said.

Critics gave Trump a “raw deal” on COVID-19, Berry said. “The whole world was competing for [personal protection equipment] from that same stockpile, and everybody’s trying to judge our president on hindsight.”

Gary Shepherd of Norton Shores, 72, said the garage door installation company he’s retiring from and selling to his son has“grown leaps and bounds” since Trump cut regulations and taxes.

And “that’s allowed us to give the employees more money,” he said.

Shepherd told Bridge he’s not concerned by Trump’s handling of the coronavirus pandemic. In fact, he agrees with Trump’s criticism of public health orders from Whitmer.

“I’m not buying into it,” he said of COVID-19. “I suppose you’ve got to be a little careful, but I think they’re going to extremes. The restrictions are crazy. It’s hurting a lot of the businesses.”