Michigan ballot issues: What to know about Prop 3 (voting rights)

WHAT IT WOULD DO: Prop 3 enshrines a variety of voting rights in the state constitution. Some are measures Michigan already has in some form: statewide election audits and the right of the U.S. military and overseas voters to receive absentee ballots. The proposal would make those rights harder to change by including them in the constitution. Other parts of Prop 3 would guarantee: the right to vote by straight party ticket, automatic voter registration, same day voter registration and no-reason absentee voting. Yet another is already in the constitution: the right to vote by secret ballot.

Throughout this crucial election year, Bridge and the nonprofit Center for Michigan are providing fact-based, data-driven information to voters about elections for Governor, Attorney General, Secretary of State and state legislative offices. This includes ballot initiatives. Today’s reports, on voting access, are the last of three this week.

Sample of what you’ll see on your ballot below.

WHO'S BEHIND IT: Promote the Vote. The majority of the committee’s funding comes from the American Civil Liberties Union and its Michigan branch. Other top funders include the United Auto Workers and the California-based Campaign for Democracy. It’s been endorsed by the Michigan League of Women Voters, the Michigan State NAACP, the Detroit Regional Chamber of Commerce, Michigan AFL-CIO and others. Democratic leaders generally support it, including Detroit Mayor Mike Duggan. Democratic Secretary of State candidate Jocelyn Benson said she supports Prop 3 because its reforms make “it easier to vote and harder to cheat.”

WHO'S AGAINST IT: One opposition group, Protect My Vote, was created on Aug. 23. It lists as treasurer Mary Doster, wife of Okemos election law attorney Eric Doster and campaign treasurer for GOP-backed Supreme Court justices. However, its funding isn’t known yet — the group has not yet had to file campaign finance reports with the state.

BENEFITS: Other states that implemented similar voting reforms have said it has made it easier for citizens to vote and improved voter turnout, according to an analysis from the nonpartisan Citizens Research Council of Michigan.

Allowing voters to register on the same day would make voting more convenient and also has been shown to increase voter turnout.

Supporters of no-reason absentee voting say it would make it easier for people to cast a ballot without waiting in line or rearranging their schedule. 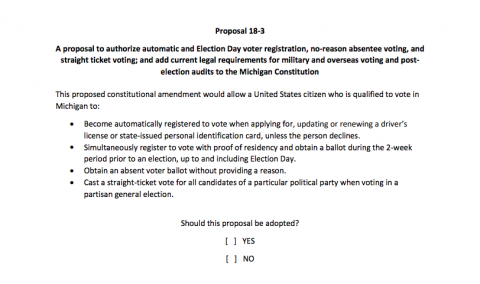 Straight-ticket voting (wherein voters can fill in one bubble to vote for all Republicans or Democrats on the ticket) has a complicated legal history in Michigan. As of now, Michiganders will not be able to vote straight-ticket in 2018, but would be protected by the constitution in future elections if Prop 3 passes. The CRC report says it increases voter participation in the partisan portion of the ballot and reduces the impact of “roll-off,” in which voters stop voting toward the bottom of the ticket.

CONCERNS: Opponents of automatic voter registration say the registration process may not effectively filter out non-citizens with Michigan ID cards, which could lead to voter fraud.

Similarly, a spokesman for Sec. of State Johnson told Bridge she is concerned that same-day voter registration wouldn’t leave clerks enough time to verify residency, and that it’s not clear what proof of residency would be required under the proposal. However, she does not have an official stance on Prop 3.

Opponents of no-reason absentee voting also cite concerns it would lead to voter fraud. According to elections experts, more likely problems are mistakes filling out the ballot — absentee votes more often have errors and are less likely to be counted than those cast in person.

Straight-ticket voting is known to benefit Democratic candidates (whose supporters tend to use it more) than Republican candidates, according to the CRC report. The report also notes straight-ticket voting leads to participation decreasing in the nonpartisan portion of the ballot (which would include offices such as local school board and mayor in some cities) and a higher rate of voter errors.

DEM. GOVERNOR CANDIDATE GRETCHEN WHITMER’S TAKE: “I will be a yes vote on proposal 3, because it’s too hard to register and to vote in Michigan and, as a result, fewer people do it. Everyone who is approved for a driver’s license or state ID should be automatically registered to vote, and any registered voter should be able to vote absentee or by mail. As a legislator, I fought to ensure valid ballots from our service members overseas were counted, to prevent voters from being turned away at the polls, and to allow same-day voter registration,” Whitmer told Bridge via email.

REP. GOVERNOR CANDIDATE BILL SCHUETTE’S TAKE: Schuette told Bridge in a recent interview he will be voting no. “The (proposal) which includes the issue of straight party voting, I think Michigan should join 40 other states and let people (fill out the entire ballot) — people are smart enough, they can make decisions. I give people a lot of smarts and brains for voting.”