LANSING — Claudia Pohlen has a big task ahead.

She’s trying to convey to the Hispanic and Latinx community in west Michigan the importance of participating in the state’s redistricting process to improve their political representation in Lansing and Washington D.C.

Much is at stake: Latinos are estimated to be the largest minority group in Kent County, at 10.8 percent or roughly 71,000 people, but the county has no elected state or federal Hispanic leaders.

“We have to protect our interests and the things that affect us, such as the education of our kids, access to health care and access to food,” said Pohlen, the communications and fundraising manager at the Hispanic Center of Western Michigan.

“If we have the opportunity to be heard, it’s very important that we show up.” she added, speaking to Bridge Michigan in Spanish. 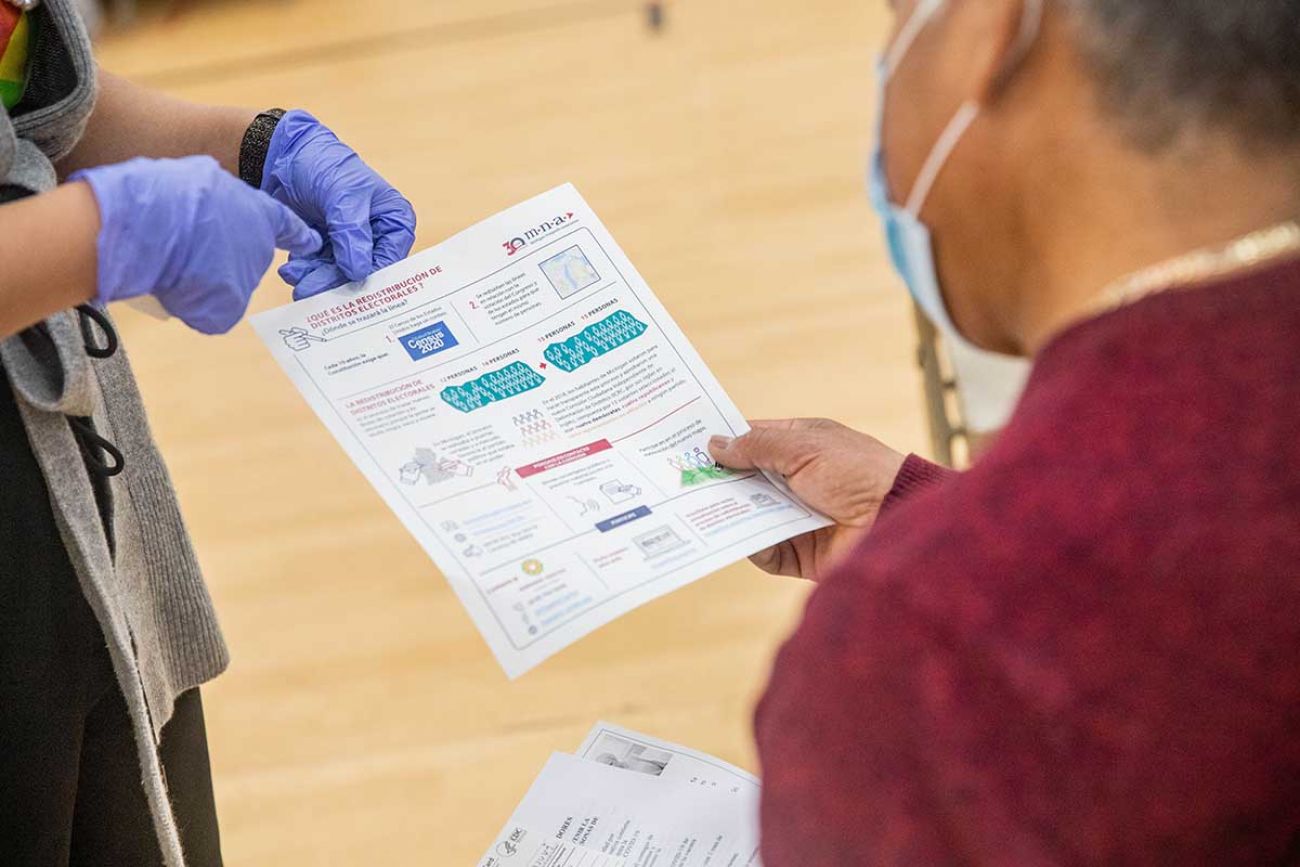 The Hispanic Center of Western Michigan is distributing literature in Spanish encouraging residents to get involved in Michigan’s redistricting effort. (Bridge photo by Daytona Niles)

The Hispanic community is one of several with high hopes for the newly created Michigan Independent Citizens Redistricting Commission, a 13-member group approved by voters to draw state legislative boundaries.

The process replaces one that was controlled for decades by Michigan politicians that produced some of the most gerrymandered districts in the nation.

By law, the redistricting commission must now take into consideration Michigan’s diversity and “communities of interest,” a broad term defined as those that share historical, economic or cultural similarities.

That’s an opportunity for groups from Hispanics in west Michigan to Arab Americans in metro Detroit to lobby the commission to be grouped together in state legislative and congressional districts.

It won’t be simple.

Michigan is expected to lose one seat in Congress because of stagnant population, declining to 13 districts, and the process could produce winners and losers, said Matt Grossmann, director for the Institute for Public Policy and Social Research at Michigan State University.

“I think people's first inclination is that this should be easy,” Grossmann said. “But once they start realizing how many criteria (the redistricting commission is) supposed to be trying to meet, and how complicated each one is, I think they realize it's not so easy.”

Any lines that benefit Republicans, for instance, are likely to hurt Democrats, while districts that benefit one group of people have the potential to dilute the political power of another.

The redistricting commission plans to begin figuring it out by hosting hearings throughout the state starting May 11 before drawing the lines later this year.

The Hispanic community and several others are readying their pitches, hoping for inclusion as communities of interest. Pohlen’s group has been showing up at vaccine clinics in the Grand Rapids area to share information about redistricting in Spanish and English. 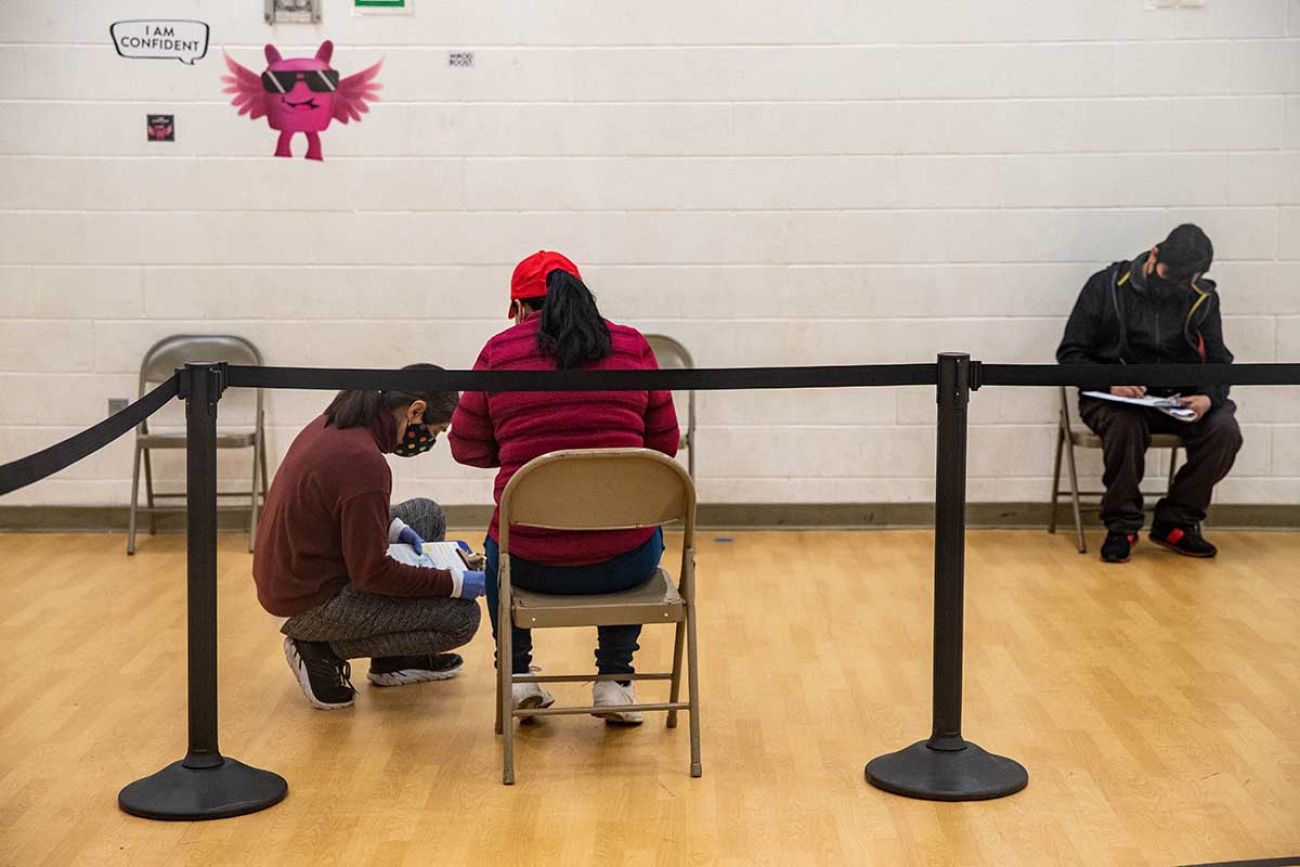 Although the Michigan Independent Citizens Redistricting Commission will take months to draw district lines, many groups such as the Hispanic Center of Western Michigan are already speaking to residents about getting involved in the process. (Bridge photo by Daytona Niles)

Nancy Wang, the executive director of Voters Not Politicians, the nonprofit that led the campaign to create the redistricting commission, said the biggest task the group will face is ensuring fairness.

“I understand that the commission has a huge job ahead of it and it really is 13 every day Michiganders, so it’s like hard to put too much on them,” Wang said.

“But they really need to hear from people too that equity is important and is real.”

Edward Woods III, the communications and outreach director of the commission, said the panel wants communities of interest to come forward.

“We are telling people, ‘you can form your own,’” Woods said. “This is a citizen-led initiative. Don’t you think we should actually hear from the citizens?”

The Michigan Independent Citizens Redistricting Commission will hold a series of in-person public hearings throughout the state to hear from community members regarding redistricting.

What counts as a community of interest?

One of the biggest challenges when trying to reach out to potential communities of interest is that people don’t know they are more than likely part of one.

John Chamberlin, a professor emeritus of public policy at the University of Michigan, said the term could create confusion.

For example, under state law, cities, counties and townships don’t fall under the category of communities of interest for redistricting purposes.

So Chamberlin and a group of graduate students at the Center for Local, State and Urban Policy at the University of Michigan have recommended spelling out what a community of interest could be.

Communities can live within a contiguous area, for instance, or share common interests, heritages or ethnicities.

“The idea is to build districts that work for the citizens, and actually works for the representative,” Chamberlain said, adding that if a representative has a coherent district, it’s easier for them and their staff to actually serve their constituents.

Some groups lobbying to be considered communities of interest are looking to keep their representation.

That’s the case of the Bangladeshi community in Hamtramck, most of whom live in the 14th Congressional District, 4th Michigan House District and 2nd Michigan Senate District. All are solidly Democratic.

Emma Davis works with residents of the Banglatown neighborhood as part of her role of community development manager. She has been partnering with leaders to help them better understand the redistricting process.

“With redistricting, you can make sure that you have a better chance of being represented by someone who reflects you, either culturally or ethnically, religiously,” said Davis, who works for the Global Detroit nonprofit. “And to then fight on your behalf … in a way that benefits the community.”

She stressed the importance of making sure a community like Banglatown stays together in one district.

Other groups, including the Arab-American community in Detroit and around Dearborn, have grown so much they’re split into many districts. Nearly 80 percent of the estimated  278,000 residents in Michigan who identify as Arab American live in metro Detroit.

For them, the priority is to get counted and create power, said Rima Meroueh, the director of the National Network for Arab American Communities at the nonprofit Arab Community Center for Economic and Social Services.

Meroueh said that those with ancestry in the Middle East and North Africa are not counted through the Census, since it is not an official category. So this process could help them in a way.

Her organization is reaching people in multiple ways: meeting people at mosques and churches, at their offices, and via social media campaigns.

Reaching out to everyone

The Michigan redistricting commission is also looking at the way the state of California did community outreach as an example of what works.

J. Ray Kennedy, a commissioner with the California Redistricting Commission, said the group has invested in ensuring every corner of the state has the opportunity to participate.

In California, former U.S. Census workers are hired to help tap into communities.

“We're very much focused on ensuring that we reach every community in the state, no matter what their socio economic level or their means of making a living,” Kennedy said. “We can't force them to participate, but we want to make sure that we reach communities throughout the state.”

Kennedy praised Michigan for doing something that the California commission has not done: offer real-time translation and interpretation services of all their meetings in Spanish and Arabic.

That could help reach more people. But one big challenge is that most of Michigan doesn’t know the independent commission exists.

Three in 4 residents, 74.5 percent, had never heard of it, according to a recent statewide survey commissioned by the panel and conducted by the Glengariff Group, a Lansing polling firm.

Complicating matters, there is a clear partisan split on who trusts the commission will behave in a nonpartisan manner.

The commission is composed of four Republicans, four Democrats and five independents. According to the survey, 13 percent of the people have a negative view of the commission.

Most of those who say they don’t trust the commission identified as Republicans, according to the poll.

Tony Daunt, the executive director of the conservative Michigan Freedom Fund, said the results are not surprising.

“From the outset, this is something that was being pushed by the left,” Daunt said. “But … ultimately, this is the system that is before us and that we have here … and I think all sides, whether they're Republican, Democrat, Independent, somewhere in the middle … should participate.”

Daunt, whose group unsuccessfully sued the state over the creation of the commission, said ignoring the commission and its proceedings could backfire, since no one else would make the arguments those on the conservative side hold.

Suann Hammersmith, the executive director of the commission, said she hopes those who don’t have faith in the group tune into meetings.

“They make concerted efforts to be fair, to follow their code of conduct, to do things in a nonpartisan manner,” Hammersmith said.

She is betting on the commission’s awareness campaign to get more people involved.

“I think they'll see that everyone is committed to fairness,” Hammersmith said. “And I think that's the best that we can do.”