Under a sweeping new order from Michigan Department of Health and Human Services Director Robert Gordon, high school sports and group fitness classes will also be cancelled, while movie theaters, bowling alleys and casinos will be closed.

Michiganders also were told to work from home unless that is impossible.

And in an attempt to discourage large Thanksgiving gatherings, indoor crowds of more than two households or 10 people will be prohibited through Dec. 8. Outdoor gatherings will be limited to a maximum of 25 people.

“We are in the worst moment of this pandemic to date,” Gov. Gretchen Whitmer said in a Sunday evening news conference as she announced the new restrictions.

“The situation has never been more dire. We are at the precipice, and we need to take some action, because as the weather gets colder, and people spend more time indoors, this virus will spread.

“More people will get sick, and there will be more fatalities.”

The Michigan High School Athletic Association responded to the new order by suspending all fall tournaments, practices and competitions set to begin over the next three weeks for football, girls volleyball, girls swimming and diving.

Republican lawmakers and some business leaders, meanwhile, criticized the new restrictions, which follow days of grim news and record-breaking case counts in MIchigan, where COVID-19 hospitalizations and testing positivity rates have reached points not seen since the spring.

“We are disappointed that Gov. Whitmer chose to go it alone, again,” Senate Majority Leader Mike Shirkey, R-Clarklake, said in a statement.

“Senate Republicans will continue working with our doctors and the medical community on ways we can combat this virus and are ready to work with the governor when she decides to work as a team.”

Under the new rules, child care centers, retail stores, gyms, pools, barber shops and other personal care service businesses will not close. Professional sports can continue without fans, as can college sports leagues that comply with “enhanced testing” rules.

Violation of the new order is a misdemeanor punishable by up to six months in jail or a fine of up to $200.

Attorney General Dana Nessel urged county health departments and local law enforcement agencies to enforce the orders, and said her office stands "ready to assist them in their efforts. 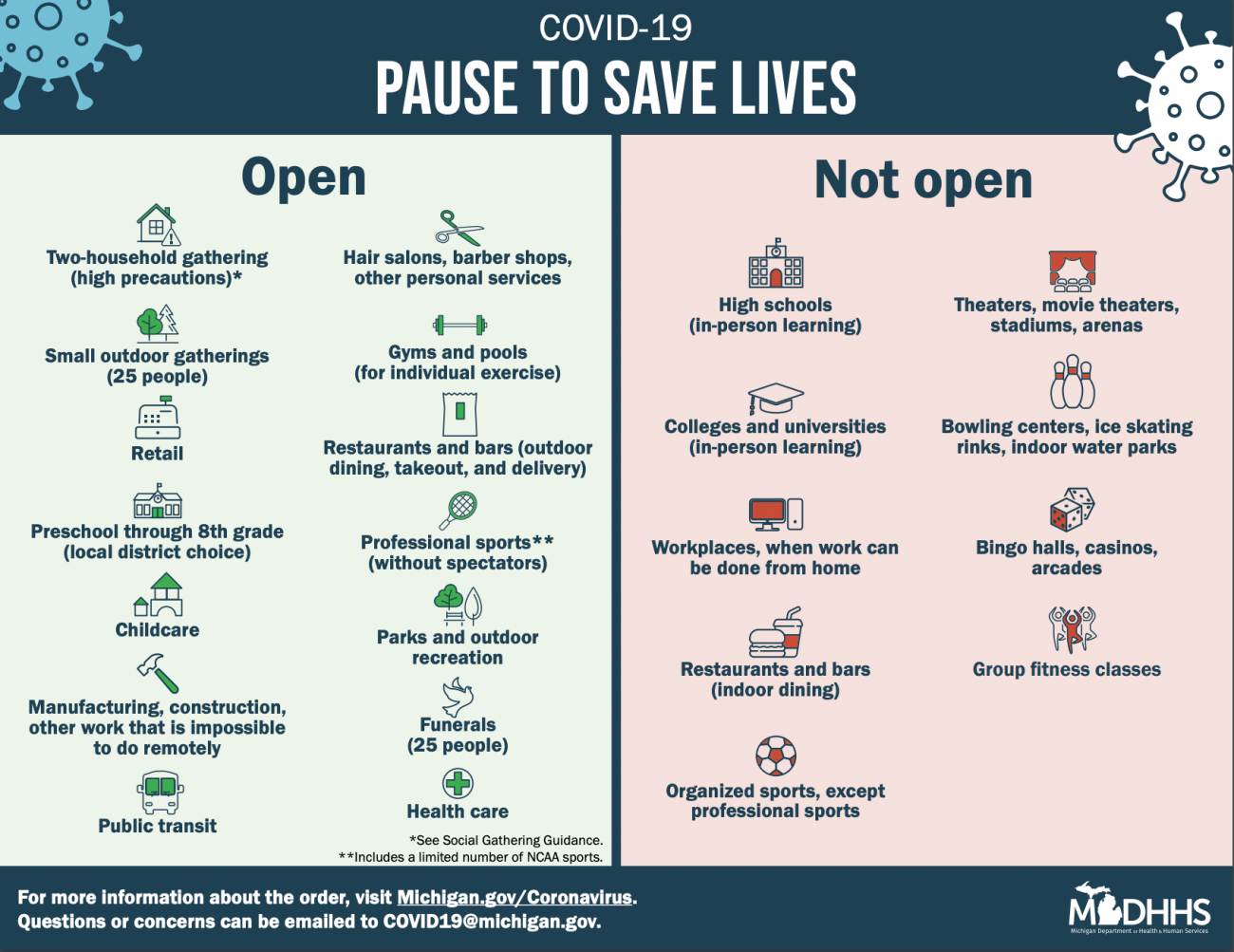 Officials in several states have imposed new COVID restrictions in recent days as the virus surges nationwide, with more than 180,000 new diagnoses and nearly 1,400 deaths on Friday alone.

Whitmer spoke from the State Emergency Operations Center near Lansing, the same spot where 250 days earlier she announced the state's first confirmed cases of COVID-19.

"Eight months after I first spoke to you in March, I'm asking that we join forces again. Because as hard as those first months were for our state, these next few are going to be even harder."

Dr. Joneigh Khaldun, Michigan’s chief medical executive and deputy director of the state Department of Health and Human Services, warned Thursday that the state’s “deadliest, most grim” days may be ahead.

She reiterated that warning Sunday, urging residents to wear masks and socially distance. Michigan has confirmed 44,019 new cases and 416 deaths in the past seven days, Khaldun said, and the state health department is currently investigating 980 separate outbreaks.

"COVID-19 is spreading like wildfire, and we are now in the dreaded surge that we have been warning about for months," she said.

The new school closures will affect most students in grades 9-12 with all classes switching to remote learning. Special-education students and English language learners will be allowed to continue to take in-person classes.

Students in grades K-8 who now attend classrooms can continue to attend classes as they do now.

The logic of closing high school buildings and leaving K-8 buildings open has to do with the pattern health officials have seen in outbreaks – that much of the spread is among older students who are involved in activities in which they are gathered in groups, such as sports.

Officials with higher education groups such as the Michigan Association of State Universities on Sunday issued statements praising the new restrictions, noting that many colleges are in communities where hospital capacity is strained.

"The data shows we must be more aggressive in urging people – including college students and staff -- to avoid even small gatherings," Dan Hurley, CEO of the state university group, said in written remarks.

But the announcement faced immediate pushback in the Republican-led Legislature, whose leaders sued Whitmer in May during a spring shutdown and celebrated when the Michigan Supreme Court invalidated an emergency powers law she had used to fight the pandemic.

“Small businesses, particularly restaurants, cannot sustain themselves through another lock-down, and these new orders will certainly spell doom for the livelihood of many,” Laura Cox, Michigan Republican Party chair, said in a statement.

GOP leaders have urged Whitmer to work collaboratively on the state’s COVID-19 response and complained as her administration continued issuing new orders through the Michigan Department of Health and Human Services.

The House last month proposed a plan that would allow county officials to relax local regulations if and when cases subside.

The GOP-led Legislature has not passed any major COVID-19 legislation to address the recent surge, however, and the House last week cancelled session as the virus spread among lawmakers.

“I want nothing more than to murder this virus, but what the governor is doing and how she’s doing it is illegal,” state Rep. Beau LaFave, R-Iron Mountain, told Bridge on Sunday evening.

“It’s not what she’s doing, it’s how she’s doing it that’s the big issue here,” added LaFave, who survived COVID-19 and called the pandemic a “tragedy.”

Gordon, the state's health director, said the new order "rests on the firm legal authority" the Michigan Legislature created after the Spanish flu of 1918. State law gives him broad powers to address epidemics.

The rules "are grounded in evidence and experience and reflect input from public health experts in Michigan and around the country," Gordon said.

A half-dozen hospital CEOs representing both large and small health systems last week pleaded with Michiganders to increase their vigilance against the virus and cancel holiday plans.

John Fox, CEO of Beaumont Health, the state’s largest hospital system, said Thursday that without better control over the pandemic, “the healthcare system can capsize.”

The surge, which reflects an explosion of cases around much of the globe, is overwhelming the state’s ability to keep up with testing and contract tracers — core efforts in both tracking and controlling the spread of the virus.

Meanwhile, the Michigan Occupational Safety and Health Administration (MIOSHA) said it was cracking down on employers whose employees were working in-person when it was possible for them to work remotely.

The new rules are not as severe as the stay-home order Whitmer issued in late March amid the state’s first wave of COVID-19. The governor lifted that order June 1 as case counts fell. She gradually eased other business restrictions as the virus spread slowed during the summer and early fall.

While officials did not rule out the possibility of more future action,  Gordon, the state's health director, said he hopes the state will be in a "better place" by the time the new three-week order expires.

"The faster we can squash this surge, the faster we can safely resume our lives and livelihoods," he said in a statement. "Hospitals are asking for all of Michigan to unite against COVID-19."

"There are no easy decisions right now" but Gordon's new closure order will "absolutely lead to a catastrophic economic fallout," said Justin Winslow, president and CEO of the Michigan Restaurant & Lodging Association.

"We are profoundly disappointed by his decision to shutter restaurants for a second time this year – this time with no safety net of federal stimulus dollars to soften the blow to already ailing operators and employees."

Michigan on Saturday reported 7,072 new coronavirus cases, setting another daily record and bringing the state’s week-long average to more than 6,000 cases per day. The state averaged fewer than 2,000 cases per day at the peak of its first wave in April.

The number of COVID-19 patients in the hospital has more than tripled in the past month in Michigan, climbing from 1,039 confirmed and suspected patients on Oct 14 to 3,241 on Saturday.

Death counts have risen as well in recent weeks, though not as dramatically as during the state’s first wave. Michigan reported 65 new and newly identified deaths on Saturday, compared to 175 deaths on a single day in April.

The state is testing more than ever, but officials are alarmed by a rise in the rate of positive results. On Saturday, nearly 14 percent of all reported tests came back positive for COVID-19, well above the 3 percent range the state had hovered at through June, July, August and September.

North Dakota Gov. Doug Burgum, a Republican who had resisted restrictions, on Friday issued a statewide mask mandate, limited crowd sizes and cut bar and restaurant capacity. GOP Ohio Gov. Mike DeWine tightened mask rules in his state, where beginning Monday, non-compliant businesses could be shut down for up to 24 hours.

Democratic governors in Oregon and New Mexico ordered “near-lockdowns,” closing some businesses and limiting the size of gatherings.  And in Chicago, Democratic Mayor Lori Lightfoot issued a stay-at-home advisory, asking residents to only leave home for work, school or essential needs for the next 30 days.