A small hospital in Michigan’s Upper Peninsula braces for COVID

SAULT STE. MARIE — As COVID-19 cases continue to surge eastward through Michigan’s Upper Peninsula, the reality at tiny War Memorial Hospital can be counted on the fingers of hospital CEO David Jahn.

Six. That’s the number of intensive care beds at War Memorial. On Thursday, five of those beds were filled; one with a COVID patient.

Ten. That’s how many patients could receive the COVID drug Remdesivir based on current supplies.

Ninety miles. That’s the drive — south across the Mackinac Bridge, then west to McLaren Northern Michigan Hospital in Petoskey — should patients with COVID overwhelm capacity at War Memorial and need more critical care.

“People choose to live in a rural area for a lot of benefits,” Jahn said of life in the U.P. “You don't have to lock your doors; there's not a lot of crime and all those things.”

But “when it comes to health care, you're making that choice, knowing that if you had something really critical, you're probably going to die here.” 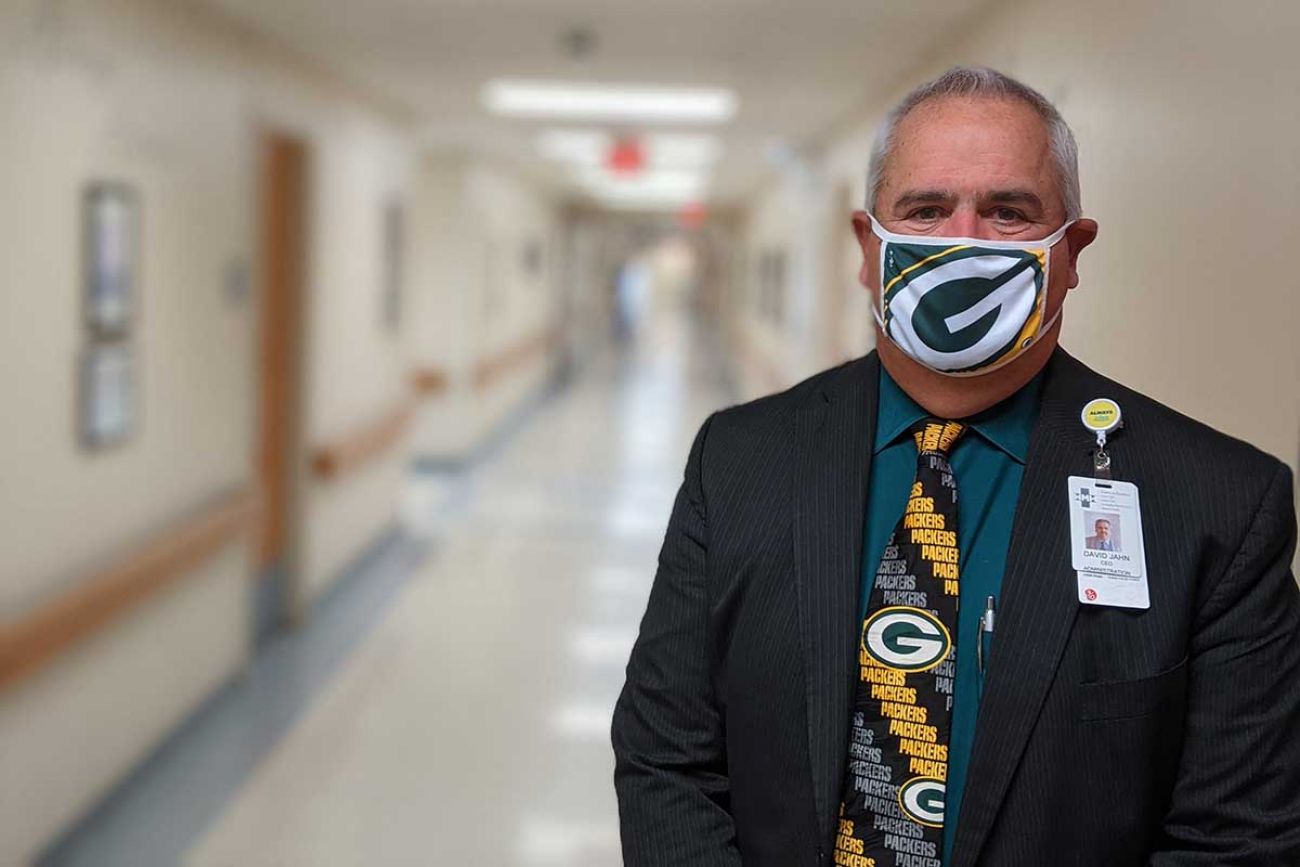 'You can call the doctor at home’

War Memorial and hospitals like it are sprinkled across more than 300 miles, east to west, of the Upper Peninsula, some with a dozen or so beds. The peninsula overall has 15 hospitals and 750 beds — with just 58 set aside for intensive care, according to state data.

By Thursday, 46 of those beds were occupied, with the worst of an anticipated coronavirus surge yet to arrive.

While U.P. hospitals have emergency plans to make more beds available, an overflow of COVID-19 patients may mean less room for the usual flow of stroke and heart attack victims, surgical patients or those in car accidents.

“The ERs see the first of the surge, too, and the more time they spend on flu and COVID, the less time they have for other emergencies,” said Mike Grisdale, spokesman for the 15-bed Mackinac Straits Hospital in St. Ignace.

COVID cases are surging across Michigan at record levels, with 5,700 new coronavirus infections reported Thursday — the highest daily tally since the pandemic hit the state in March.

In the four-county region of Luce, Mackinac, Alger and Schoolcraft, COVID-19 has surged fourfold since the beginning of October from 111 reported cases to 453 on Thursday, according to state data. Those four counties each have their own hospital, none of which have intensive care beds, according to Kerry Ott, spokeswoman for the LMAS Health Department.

The wave of infections prompted Jahn of 82-bed War Memorial and administrators at eight other hospitals to issue a joint statement on Monday warning the public that they are “at risk of a capacity crisis.”

Several years ago, Rambo’s teenage son had to be airlifted to Helen DeVos Children’s Hospital in Grand Rapids after he grew listless from a serious flu infection.

The fact that patients may need to travel for hours for the most critical treatment “isn’t news to anyone here,” Rambo said from The Little Gift Shop, which she opened in 2018.

But it’s a trade-off many folks are willing to accept to live in this less crowded land.

Small local hospitals can’t always afford the most sought-after specialists or most cutting-edge technology. Nor can they easily “load-balance” with other hospitals, transferring patients among hospitals to ease pressure on the most overwhelmed locations.

“Yooper life!” a shopper added as she meandered by.

A hunt for nurses

Inside War Memorial, numbers are on Joe Cohee’s mind. Among them: Five.

Cohee heads emergency services. He largely depends on five contingent nurses who cross the bridge from Canada when staffing levels fell too low in the emergency department. 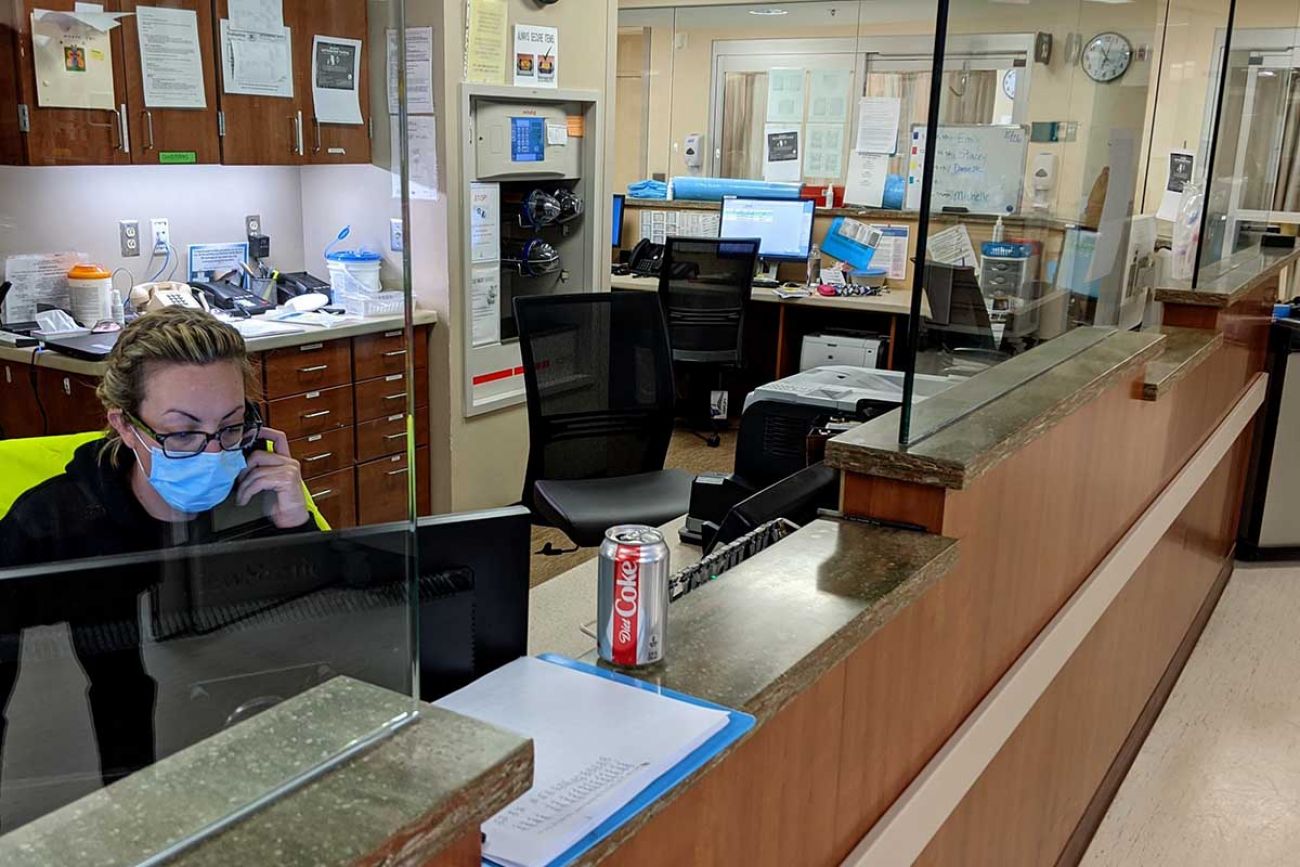 But COVID has forced medical personnel on both sides of the international border here to choose which side they'll work in.

The five nurses are staying put on the Canadian side for now, said Cohee, sitting at a desk covered with papers and files. That’s a problem, made worse by the challenge of getting traveling nurses in Michigan to take temporary assignments in Sault Ste. Marie in the dead of winter.

With COVID cases on the uptick, “my staff will get sick, that's a given,” Cohee said.

“What resources do I have to replace them? There's not many to be found.” 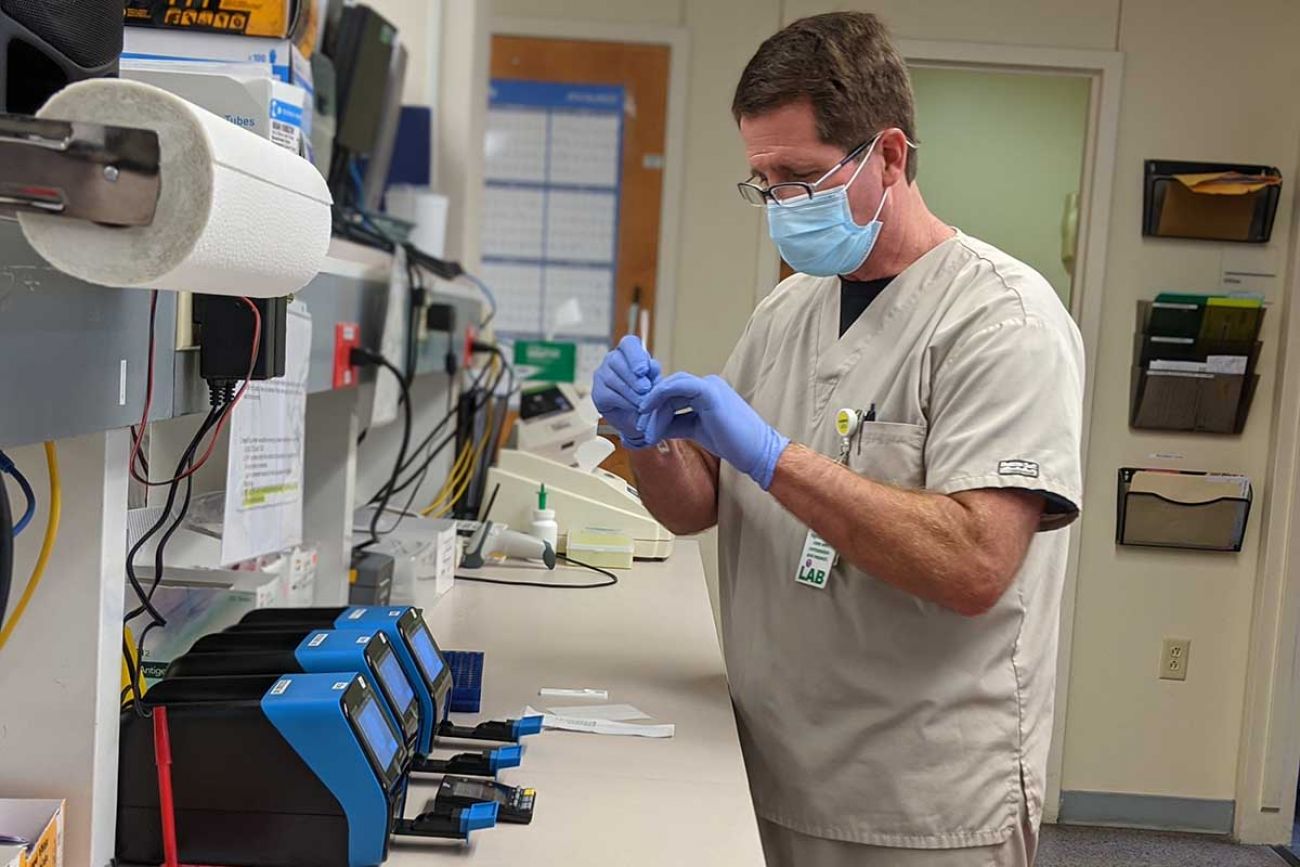 Standing outside on this windy day, a Jeep pulled up at a converted newspaper box that now serves as War Memorial’s test kit pick-up spot. Stephanie Pins, the hospital’s director of quality management, said War Memorial has enough testing supplies for now.

“The limitation right now is the manpower to run the tests,” she said.

A desire to escape this fever dream of a pandemic year has drawn a flood of non-Yooper tourists to the Upper Peninsula; most recently, to watch as autumn repaints the miles and miles of forests and hulking lake freighters thread through the famous Soo Locks.

As they pass through Rambo’s gift shop, visitors snap up pieces of handcrafted Soo charm, home decor, candles, clothing and accessories from her shelves, driving up sales to some 40 percent over last year. 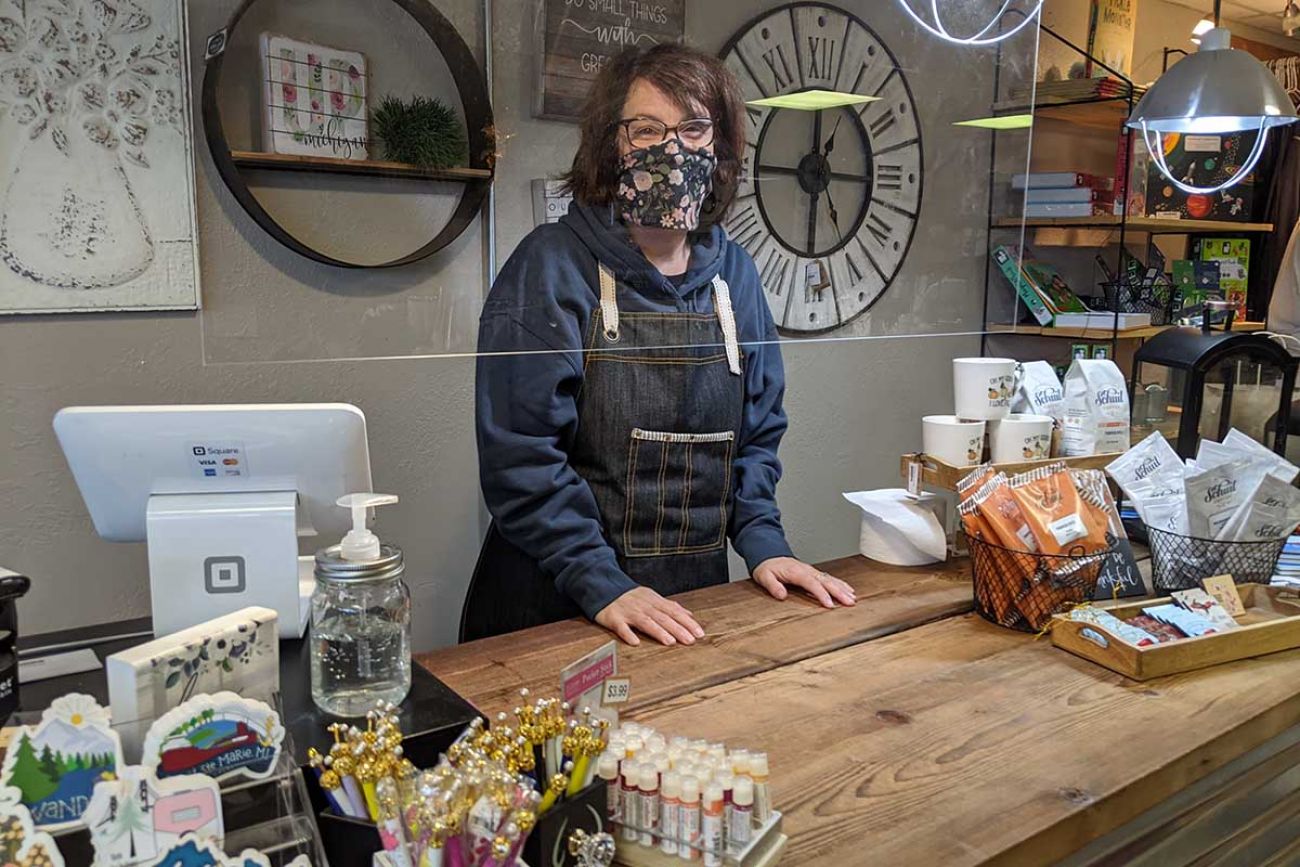 But in Sault Ste. Marie, a town with little wiggle room for crisis, some see peril in the river of tourists drifting in and out of its shops and restaurants.

On the Friday before Labor Day, Chippewa County reported 43 confirmed cases of COVID. That number climbed to 118 by Monday, with 54 cases reported in the last two weeks.

The talk, as it often does, turned to COVID.

Jones, a retired prison bookkeeper, said she grew more worried about the virus when she saw webcam images of backed-up, northbound traffic on the Mackinac Bridge on Labor Day weekend.

It seemed as though “there’s six cars going south for every 600 coming north,” she said.

Then over three October weekends, the “Boo in the Soo” hockey tournament drew young hockey players and their families to the Soo area. A stream of hunters, snowmobilers and other outdoor enthusiasts will follow, residents told Bridge.

There are also three nearby prisons that house some 4,000 inmates in tight quarters nearby — prime real estate for the wildfire-like spread of the virus among inmates, as well as guards and staffers who then return home after their shifts.

As the women chatted above the clatter of a restaurant gearing up for lunch, two inmates from the Newberry Correctional Facility were being treated for COVID by War Memorial staff.

The uncertainty of the months ahead is grinding, said Jones’ companion at the coffee shop, Deb Piche, 68, of Brimley.

Earlier this week, snow had already dusted the miles of evergreens and tamarack trees here — now gold in late autumn.

That seasonal change will drive residents inside, and holiday gatherings will follow — all good conditions for the virus’s spread, said Karen Senkus of the Chippewa County Health Department.

“It's not going to take much to put our hospital at capacity,” she said.

Still, there is good news too, she and others noted.

War Memorial staff are better prepared for COVID than in March and April, when the virus swept through southeast Michigan. 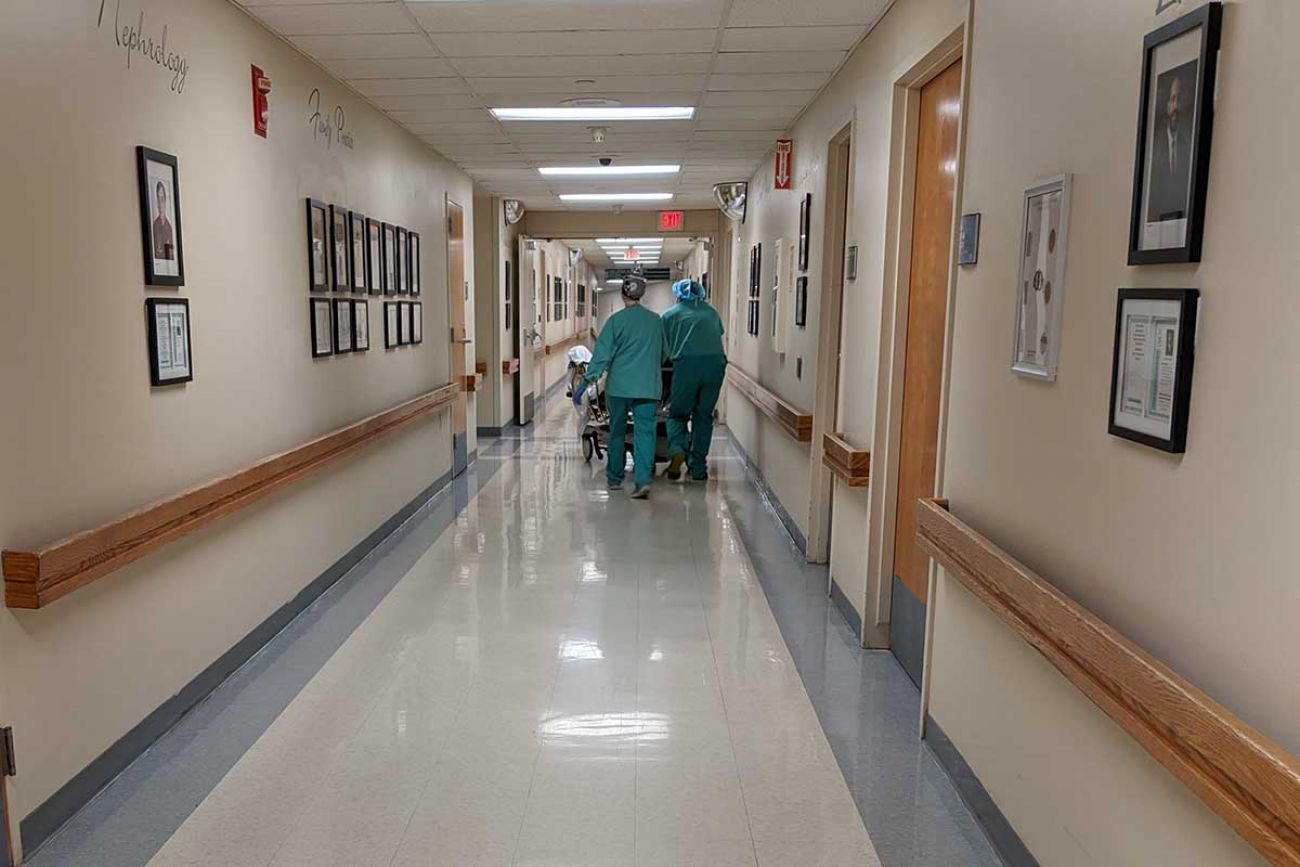 Hospital staffers took part in “conference calls where we were with Henry Ford [Health System] and Beaumont [Health] and they were seeing the massive surges,” said Pins, the director of quality management.

Like the state’s other hospitals last spring, War Memorial canceled all but emergency procedures. Then for weeks, it remained quiet — an almost eerie waiting game — as COVID cases remained low in the U.P.

“We were ready … and kind of sitting there. It was like an invisible thing, and we didn't know where it was,” Pins said.

Now, that invisible thing has taken some form.

There's still no vaccine or sure-fire treatment, but the symptoms are better understood. Testing is more readily available. Treatment options are growing. Doctors know better how and when to use ventilators against the virus.

“There's still some nervousness and anxiety because it's an unknown virus, you know, but I think it's not as bad as it was,” Pins said.