As introduced in March, legislation sponsored by Sen. Lana Theis, R-Brighton, would have required applicants to mail a photocopy of their driver license or state ID card to qualify for an absentee ballot. A companion bill would tighten the state’s in-person voter ID law by eliminating the option to submit an affidavit instead.

Republican and Democratic election clerks — along with groups like the Michigan AARP — had criticized the proposal because of the potential for identity theft and barriers it could create for elderly, low-income or other voters without access to photocopiers for printers.

As amended Wednesday, the bill would instead give an absentee ballot applicant multiple options to confirm their identity: Voters could provide their drivers license or state ID card number, attach a photocopy of their ID or write the last four digits of their Social Security number on their application.

The legislation would “fix a glaring loophole in the absentee ballot process,” said Meghan Reckling, chief of staff to Theis.

“This is not voter suppression.”

Democratic Secretary of State Jocelyn Benson disagrees, saying Michigan already has a “robust, secure system to ensure that only eligible citizens are able to cast ballots in our elections.”

A record 3.3 million Michigan voters used absentee ballots in 2020, and that process “did not result in any widespread fraud,” Reames said. “Voting if you’re ineligible is still a crime. We think there are good safeguards in place. We see this as a pointless restriction.”

The Michigan bill, as amended, would be more similar to laws in North Carolina, Ohio and Pennsylvania that allow absentee applicants to include part of their Social Security number.

Not an ‘undue burden’

Michigan already has an ID law for in-person voting,  allowing those without one to instead sign an affidavit affirming their identity under penalty of perjury, punishable by up to five years in prison.

Roughly 11,400 Michiganders submitted an affidavit last year, which is about 0.2 percent of the 5.5 million voters who participated in the presidential election. There is no evidence that anyone successfully impersonated a voter to cast an in-person ballot last year.

Sponsoring Sen. Tom Barrett, R-Charlotte, called the affidavit option a “loophole” that should be closed to deter fraud.

“I don’t think the expectation people show a photo ID is an undue burden,” he said.

Critics contend the bill is a solution in search of a problem that could impose a large burden on a small number of voters, especially low-income and minority voters. Some studies estimate as many as 13 percent of African Americans nationwide lack a government-issued ID.

While Michigan already waives ID fees for voters who qualify for public assistance programs, those voters would still need to travel to a Secretary of State’s office, take time off work to do so, or to get a copy of their birth certificate to successfully apply.

"This cost may seem low to many, but for some people with limited income, this could mean one or two or three less meals for their family," said Fonda Brewer, a voter from Delta Township near Lansing, told senators on Wednesday.

“This bill will absolutely deter our most vulnerable populations: the elderly, the poor, the disabled and communities of color.”

As Bridge Michigan has reported, roughly 1 in 4 voters who used the affidavit option in 2020 were located in Detroit, but the practice was not limited to large cities or Democratic strongholds.

Voters in 82 out of 83 Michigan counties used the option to vote without identification last year, often because they forgot to bring their ID to the polls, according to local clerks.

Under the proposed legislation, a voter who does not have their ID on Election Day could still submit a “provisional” ballot, but their vote would not be counted unless they bring an ID and other proof of residence back to their clerk’s office within six days.

But voters currently required to use a provisional ballot rarely return with the additional information necessary to ensure their vote is counted, according to state data. Of the 745 provisional ballots filled out last year, 263 were ultimately counted, 35 percent.

“This bill would do nothing more than disenfranchise” voters, Benson told reporters before the hearing.

Other bills discussed Wednesday would prohibit the Secretary of State for mailing unsolicited absentee ballot applications to voters, as Benson did last year to encourage remote voting during the COVID-19 pandemic, and prohibit local clerks from accepting private grants to help facilitate election administration.

Lawmakers have spent weeks debating the election reform bills, which could form the basis of a ballot initiative by the Michigan Republican Party, but they have not yet held any votes.

“It's in the beginning stages, and we're trying to work with everyone,” Senate Elections Committee Chair Ruth Johnson, R-Holly, said Wednesday. 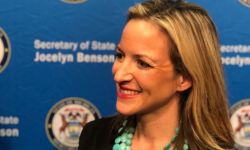 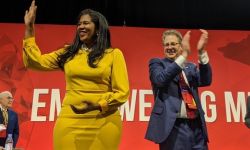 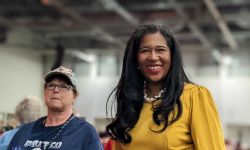