“And we, the Democrats, are doing something about it,” Whitmer said in her 10-minute rebuttal to Trump, suggesting the president and congressional Republicans have not done enough to address problems facing residents in Michigan and other states.

The first-term governor stepped into the national spotlight from a local stage at East Lansing High School, where she spoke before a crowd of more than 300 invited guests. She was joined by her teenage daughters, both students at the school, and praised young people across the country urging political leaders to improve school safety and curb climate change.

The governor’s criticism prompted cries of hypocrisy from Republicans who noted Whitmer’s own struggle to “fix the damn roads” in Michigan, which is expected to be a key battleground state in this year’s presidential election.

“While President Trump has delivered on his promise to make our nation great again, Gov. Whitmer is becoming the proper poster child for a party that places partisan politics and progressive posturing above the best interests of our nation,” Michigan Republican Party Chairwoman Laura Cox said in a statement.

Trump has also pledged to address infrastructure but walked away from bipartisan negotiations in May 2019, citing frustration with congressional Democrats who were investigating his potential ties to Russian election interference in 2016.

Whitmer, selected to deliver the Democratic Party’s official response by U.S. House Speaker Nancy Pelosi, briefly mentioned the presidential impeachment process that has dominated debate in Washington D.C.. But she did not discuss uncertainty over Iowa caucus results that has at least temporarily upended her party’s presidential nominating process.

Governor Gretchen Whitmer Democratic Response to the State of the Union

Instead, as promised earlier Tuesday, Whitmer used the national forum to focus on “kitchen table issues” like health care in her appeal to the viewing public. She chastised Republicans for attempting to undermine the Affordable Care Act after failing to repeal it in Congress.

“It’s pretty simple: Democrats are trying to make your health care better,” Whitmer said. “Republicans in Washington are trying to take it away.”

The Trump administration last week announced it would let states seek waivers to convert Medicaid funding into block grants, which experts say would cap or cut federal spending on the program that provides health care to low-income Americans at or near the poverty line.

Every Democrat running for president “has a plan to expand health care for all Americans, and every one of them has supported the Affordable Care Act with coverage for people with pre-existing conditions,” Whitmer said.

Trump did not specifically mention Michigan in his State of the Union Address but highlighted policies and trade deals that could have large effects here, including his long-promised replacement for the North American Free Trade Agreement.

“Many politicians came and went, pledging to change or replace NAFTA – only to do absolutely nothing,” Trump said. “But unlike so many who came before me, I keep my promises.”

The president visited Macomb County last week for a victory lap following congressional approval of the United States-Mexico-Canada Agreement, which passed with bipartisan support after Democrats said they secured additional protections for workers and the environment.

Proponents contend the trade deal with boost car production in auto manufacturing states. But as Bridge Magazine reported, some experts believe it could have the opposite long-term effect if car companies choose to leave North American rather than comply with new regulations.

Trump also touted a recent phase-one trade deal with China he said will “defend our workers, protect our intellectual property, bring billions of dollars into our treasury, and open vast new markets for products made and grown right here in the USA.”

Michigan’s unemployment rate has continued to fall under Trump, dropping from 4.9 percent when he took office in 2017 to 3.9 percent in December. Michigan added about 19,500 jobs in 2019 but lost about 5,300 jobs in the manufacturing sector the president has promised to bolster, according to preliminary data from the U.S. Bureau of Labor Statistics.

Trump championed what he called a “blue-collar boom.”

In her response, Whitmer contended too many workers are still struggling.

“It doesn’t matter what the president says about the stock market,” she said. “What matters is that millions of people struggle to get by or don’t have enough money at the end of the month after paying for transportation, student loans, or prescription drugs.”

As Bridge has reported, the number of jobs in Michigan has grown jobs half as quickly as the nation since 2016, and workers here make less money than their counterparts in other states. Statewide wages are largely flat when adjusted for inflation, while they’ve grown by more than 4 percent nationwide.

Whitmer won Michigan two years ago with a campaign that focused on concrete issues like fixing roads, cleaning up drinking water and protecting health care access.

But her problem-solving skills have been put to the test since taking office, particularly on roads, where her initial plan to raise fuel taxes by 45 cents per gallon landed with a thud in the Legislature. Even members of her own party were reluctant to introduce legislation that would have given Michigan the highest at-pump taxes in the nation.

Whitmer last week announced a scaled-back plan to rebuild state highways and bridges over the next five years by issuing bonds. Her administration will circumvent lawmakers by borrowing up to $3.5 billion that the state will repay over two or three decades with interest. It will not fix local roads but the governor has challenged legislative Republicans to propose long-term alternatives to her failed fuel tax plan.

A new online ad published this week by the Republican Governors Association accused Whitmer of “broken promises” in a state still saddled with “broken roads.” It included footage of Trump’s December rally in Battle Creek, where the president suggested Whitmer is “not fixing those potholes.”

Republican National Committee Chair Ronna McDaniel, who led the Michigan GOP through 2016 and still lives in the state, praised the ad on Twitter.

“Just like [House Speaker Nancy] Pelosi & House Democrats, Whitmer has been a disaster who broke her promise to deliver bipartisan results,” she said on Tuesday ahead of the governor’s speech.

Speaking to reporters ahead of Whitmer’s speech, Lt. Gov. Garlin Gilchrist said he was not surprised by criticism from McDaniel.

“I wouldn’t expect her to say anything different,” he said, “but what I do know is this administration has made pretty clear that we are going to take action and use the authority that the people of Michigan elected us to use.”

State Democratic Party Chairwoman Lavora Barnes said Whitmer “made Michigan proud by showing the American people what real leadership looks like as she highlighted her plans to grow Michigan jobs, expand access to health care, and fix the damn roads.”

Cox, her Republican counterpart, called Whitmer’s response “as empty as the potholes her broken promises have failed to fill.”

Whitmer was not particularly well known nationally ahead of the speech but has been celebrated by party leaders after her 2018 win in a state Trump had flipped two years earlier.

Democratic strategists called her a logical choice to deliver the Trump rebuttal because of Michigan’s expected importance in the November general election.

“I think it's a clear signal that Michigan is everything in 2020,” said T.J. Bucholz of Vanguard Public Affairs. “It is the critical battleground state.”

Trump won Michigan by 10,704 votes in 2016. It was the narrowest win in state history and the first by a Republican nominee since 1988. The New York businessman has already held two re-election rallies in Michigan, reinforcing his belief in the importance of the state this fall.

Most Democratic presidential candidates have campaigned in Michigan as well, and more visits are expected ahead of the state’s March 10 primary. Former New York Mayor Michael Bloomberg rallied supporters earlier Tuesday in Detroit.

While Whitmer risked the possibility of an embarrassing gaffe or moment on national television, Hemond said the opportunity presented “mostly upside” for her. Some pundits have floated Whitmer’s name as potential vice presidential pick, but she has publicly denied interest.

“I think it’s probably good for her politics, at a minimum, in terms of re-election, to develop more of a national following for no other reason than to be able to raise money,” he said. “I don’t see how it would interfere with her doing her job as governor.”

But that’s exactly the charge levied this week by Cox, who criticized Whitmer for deciding not to personally present her 2021 budget recommendations to the state Legislature on Thursday.

Budget Director Chris Kolb will lay out the new spending plan to lawmakers instead, while Whitmer will take questions from the media later in the day.

But longtime Lansing observers said there is nothing unusual about Whitmer relying on a top appointee to present her budget proposal to lawmakers.

While Snyder, a certified public accountant, relished participating in the annual budget presentation, that was not the case for his immediate predecessors. Gov. John Engler “never presented a budget,” said Budget Office spokesman Kurt Weiss. Gov. Jennifer Granholm “presented her first and last budget, but the other six years her budget director did it.” 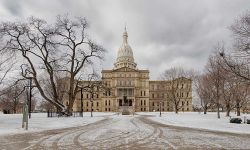