The versions adopted by legislative Republicans by 60-48 margins — mostly along party lines — roll back the language as written and signed by hundreds of thousands of Michigan voters on the wage and sick leave efforts in a bid to make the Nov. 6 ballot. Critics slammed the move because the GOP preemptively passed the laws in September so they could defang them in the legislature’s lame-duck session.

Three Republicans — Reps. Joseph Bellino, of Monroe; Martin Howrylak, of Troy; and Jeff Yaroch, of Richmond — joined Democrats in voting against the bills.

Dec. 21: That's a wrap! What bills passed, died in Michigan lame duck for the ages
Related: Michigan power grabs, pipelines and pot: What we’re tracking in lame duck
Related: In lame duck, all eyes are on Michigan Gov. Rick Snyder

The House made some last-minute changes to both bills before passing them, in what House Republicans described as negotiations between legislative leaders and Snyder’s administration. The Senate voted in the changes Tuesday evening, sending the bills to Snyder’s desk.

It’s unclear whether Snyder, who will be replaced by Democrat Gretchen Whitmer in January, would sign either bill. His office has said only that the governor considers bills on their individual merit. 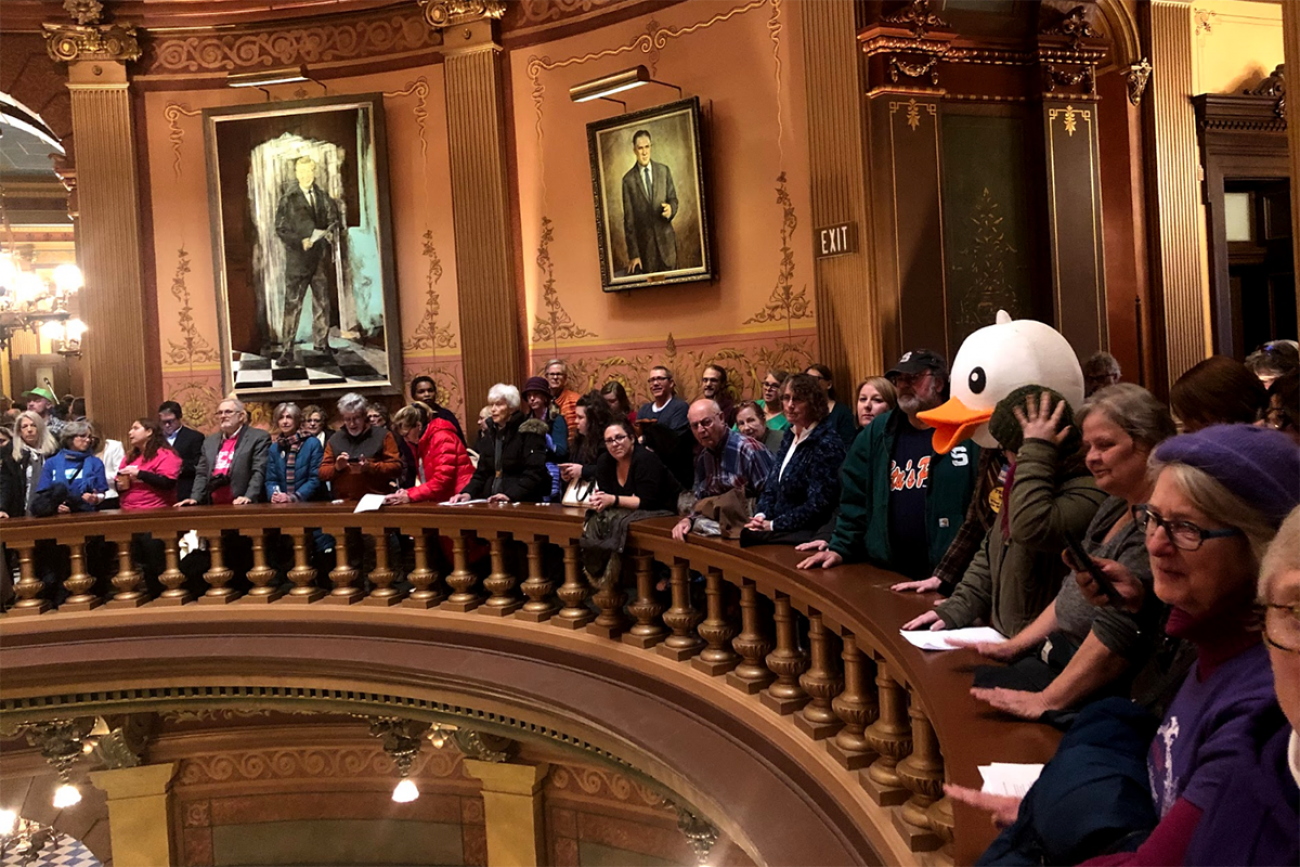 Senate Majority Leader Arlan Meekhof, R-West Olive, told reporters Tuesday night that he is confident Snyder will sign the bills because “he said so,” though Snyder spokesman Ari Adler downplayed the talks.

Any bills not adopted by the end of this month are considered dead and will have to be reintroduced in January.

Tuesday’s votes capped a dramatic day at the Capitol, as the Legislature enters the second week of its four-week lame-duck session, the period between the Nov. 6 election and the end of the two-year term in December.

Aside from the wage and benefits issues, Tuesday was marked by a heated committee meeting over a bill that would allow the Legislature to intervene in lawsuits and controversy over bills that would expand environmental deregulation.

Protesters gathered in the rotunda, their chants against the minimum wage and sick leave changes — “Leave your hands off our bills!” — audible from inside the House chambers. At one point, a man was overheard saying he wanted to launch a ballot drive to do away with lame-duck voting.

Earlier Tuesday, Republicans in a House committee voted down amendments to the minimum wage and sick leave bills offered by Democrats, including to require the Legislature to abide by the same wage and benefits provisions as in the bills, before voting along party lines to send it to the floor for a final vote.

And analysts with the nonpartisan House Fiscal Agency projected that a proposal to slow down the march of Michigan’s minimum wage to $12 an hour would cause more people to be eligible for Medicaid and state cash assistance.

Concerned about that and other implications for Michigan workers, Democrats urged their Republican colleagues Tuesday not to pass them.

“Regardless of which side of the aisle you sit on, or the economic policies that guide your decisions, all of us were sent here to do one thing above all else: Represent the people of Michigan to the best of our abilities. And the fact of the matter is, the people have already spoken on this matter,” said Rep. Erika Geiss, D-Taylor. 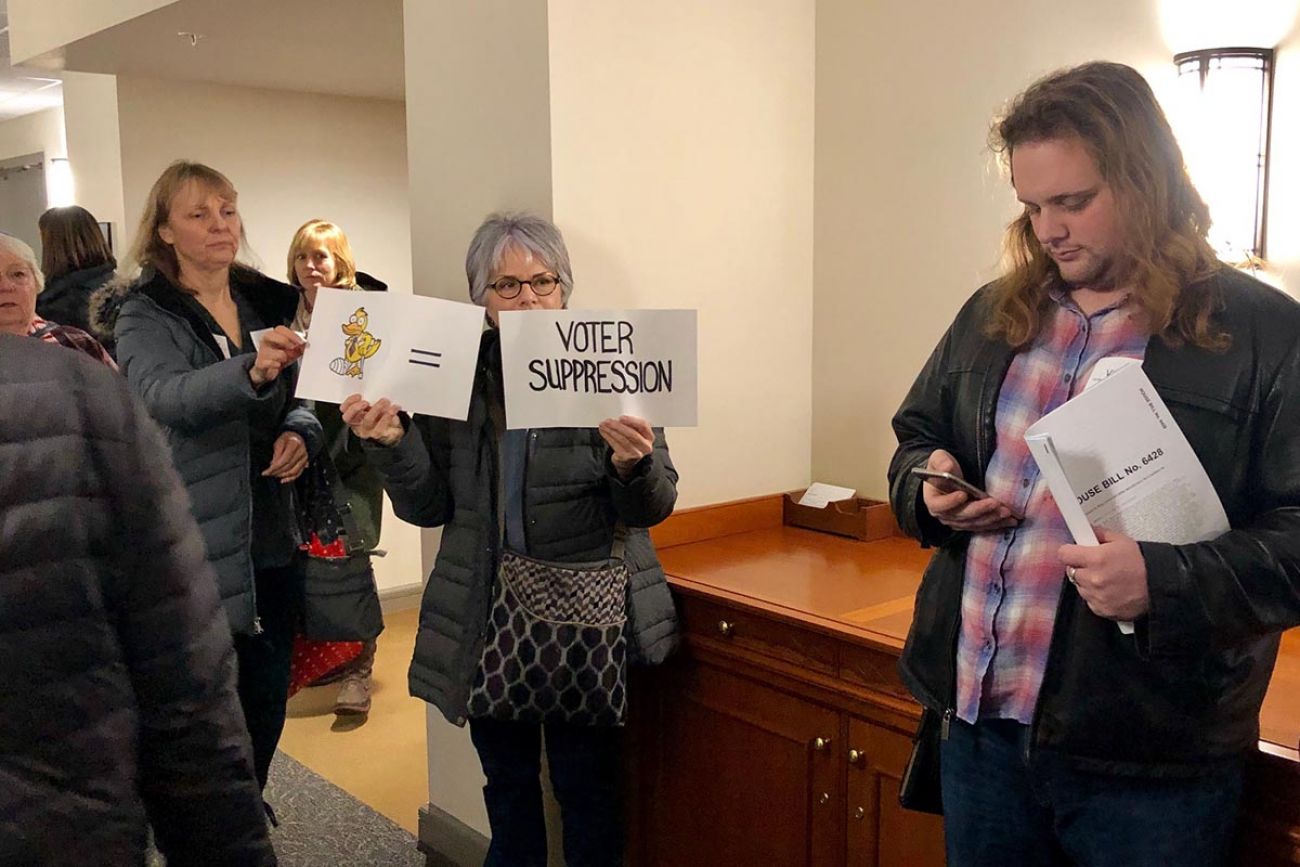 Business groups have fought the measures — and opponents note the initiatives were heavily funded by out-of-state liberal interest groups who paid for signatures.

The backers of the sick leave proposal, for instance, raised $2.5 million — and only $10 came from a Michigan resident. Almost all the money for the effort came from Washington D.C.-based groups.

Andy Johnston, vice president of government and corporate affairs for the Grand Rapids Area Chamber of Commerce, told Bridge Magazine the majority of the group’s members already provide time off for illness and “are staring in the face of a lot of additional costs of compliance.”

“To try to create a paid sick leave law that’s going to be workable for Michigan is the whole goal behind this legislation, and the same with minimum wage.”

People on both sides of the wage and benefits issues claimed the other side has been unwilling to negotiate.

“We are willing to sit down, but we’re also not going to compromise on what workers really need,” said Danielle Atkinson, one of the organizers of the MI Time to Care committee, which pushed the sick leave petition and this week filed a petition with the state to run another ballot drive in 2020.

Mike Shirkey, the incoming Republican Senate majority leader from Clarklake who sponsored the sick leave bill, told Bridge: “It wasn’t this mystery that we were going to amend it after we enacted it. And yet, to my recollection, we have not been contacted by one member of this organized group to talk about the kinds of changes that I think — that we believe — are necessary.”

Fueling the fire is the possibility of future litigation should the bills be adopted and signed into law. Republican Attorney General Bill Schuette on Monday issued a legal opinion asserting the Legislature’s ability to amend citizen-initiated laws it adopts in the same session.

Schuette’s opinion is a counterpunch to a 1964 opinion from then-Attorney General Frank Kelley, who asserted the opposite.

Advocates for preserving both laws as written point to the Kelley opinion as the basis for their argument that the GOP’s actions are unconstitutional.

After next year, the bill as introduced by state Sen. Dave Hildenbrand, R-Lowell, would have raised the minimum hourly wage by 23 cents per year until it equaled  $12, which should happen by 2030. That’s a far longer timeline than contemplated by the citizen initiative, which would have reached $12 by 2022, eight years earlier.

The House’s changes Tuesday would take the full minimum wage to $12.05 in 2030 instead of $12, reflecting changes Snyder’s administration requested, said Gideon D’Assandro, a spokesman for House Republicans.

Hildenbrand’s bill also strips a provision to increase the minimum wage by inflation each year after the rate tops out at $12.05.

House Fiscal Agency analysts projected that workers who earn the minimum wage actually would earn less under the Senate bill by 2030 than they would have under the citizen-initiated version because inflation would have brought the raise to $14.16 that same year.

The Republican lame-duck bill also restores the tipped wage paid to workers who collect tips as part of their jobs, which is currently 38 percent of the full minimum wage, or $3.52 per hour. That generally applies to restaurant servers, who are among the biggest proponents of raising the wage.

The citizen-backed law, if allowed to take effect, would have gradually raise dthe tipped wage until it equaled the full minimum wage rate.

They estimated that reduced wages would lead to a less than 1 percent increase in the amount of eligible Medicaid beneficiaries and a $14 million increase in Medicaid costs in the 2019 fiscal year ($2.7 million of that cost would come from the state’s general fund). Costs would continue to increase annually.

And while employers are required to pay the difference if a server doesn’t earn enough through tips to make the full minimum wage, Pease said restaurant operators could choose to cut servers’ hours to compensate if business isn’t strong.

“What was the reason for passing this bill (in September) if it was so bad?” Pease said.

Hildenbrand, in his House committee testimony, said wages should be set by the marketplace and in agreements between employees and employers, not by government mandates.

He said his bill is an attempt at a solution that recognizes minimum wage increases are important to many Michiganders, while also keeping the tipped wage that is important to the restaurant industry.

State Rep. Laura Cox, R-Livonia, said in a speech on the House floor that the minimum wage law, without changes, would upend the balance sheets of Michigan small businesses and actually cause more harm than good to the workers it purports to help.

Small businesses “will be forced out of business under the proposal as written. That means people will land in the unemployment line,” Cox said. “Michigan’s economy is coming back, and workers are able to provide for their families again. We can’t turn back now.”

The restaurant industry says the tipped wage is vital to the sector, and that its elimination would force restaurants that already operate on thin profit margins to cut costs in other ways. That could lead to higher menu prices, fewer hours for servers or doing away with tipping altogether.

“Repealing the tip credit goes against what tipped employees want,” said Robert O’Meara, vice president of government affairs for the Michigan Restaurant & Lodging Association, in his House committee testimony. He cited efforts in Maine and in Washington, D.C., that reinstated the tipped wage after citizen efforts to eliminate it.

Senate Bill 1175 would amend the citizen-backed sick leave law in an effort to give more flexibility to employers to offer sick time to their employees.

Among the House changes made Tuesday to the sick leave bill, employees would be able to accrue leave time immediately and be able to use it within 90 days, similar to what was in the citizen-initiated law.

Wendy Block, vice president of business advocacy for the Michigan Chamber of Commerce, testified the Republican lame-duck changes will help employers by aligning with federal laws that exempt small employers and allow companies to continue to offer employees a pool of paid time off that employees can use for vacation, personal use or to recover from illness.

The changes, Block said, “represent the real-world input and concerns of job providers across our state.”

Shirkey, the sick leave bill sponsor, owns Orbitform LLC, a Jackson-based company that makes assembly machines for manufacturers. He said most of his firm’s roughly 110 employees are full time, and qualify for paid time off that employees can use for vacation and unscheduled events, including illness.

Employees can earn up to four weeks off per year, based on how long they’ve worked for Orbitform, he said.

“I believe most employers, particularly in today’s competitive markets, do the same thing,” said Shirkey, whose business would be required to comply with the law.

The bill, he added, “is and remains an honest attempt to meet the spirit and intent of the statute.”

Yet Peter Ruark, a senior policy analyst for the Michigan League for Public Policy, which advocates for policies that support vulnerable residents, said the bill would not extend sick leave protections to more than half of Michiganders, many of whom work for small companies.

That estimate is based on data from Brandeis University about the percentage of working adults who are eligible for unpaid leave under the federal Family and Medical Leave Act by state. Ruark said the data is applicable because the Senate bill models its exemption for small businesses on the FMLA definition.

“You’re basically at status quo for a lot of the lowest-wage workers,” Ruark told Bridge.

“The way not to (change) it would be to just declare more than half of the workforce ineligible. And that, to me, is the worst thing about this.”