Records: COVID-19 nursing home deaths may have been undercounted in Michigan

Michigan Government
Records: COVID-19 nursing home deaths may have been undercounted in Michigan

The death toll in Michigan’s nursing homes and other senior long-term care facilities may be higher than the 5,600 COVID-19 deaths currently attributed to the facilities, according to newly released information.

Nursing homes nationwide were among the hardest hit by COVID-19 and Michigan’s official total accounts for nearly 30 percent of the state’s 19,090 deaths.

The new information, first reported by Deadline Detroit and the Mackinac Center for Public Policy, may indicate there were more deaths in those facilities than has been reported.

That would be significant because Gov. Gretchen Whitmer’s handling of nursing home COVID-19 cases has been under scrutiny for months, and Republican legislators are investigating why her administration initially created regional nursing home “hubs” to house infected patients.

According to documents supplied to a Michigan-based podcast, No BS News Hour, and the Mackinac Center, which filed a lawsuit against the state to get COVID-19 death data, Michigan reviewed nearly 1,500 deaths from the earliest days of the pandemic, March through June 2020, that were later determined to be from COVID-19.

The review of the so-called “vital record” deaths — named because they were determined through a review of death certificates — found that 648 were nursing home residents.

“This is obviously a matter of great public importance and we don’t know a lot about a large pool of these vital record deaths,” said Steve Delie, an attorney and the Mackinac Center’s expert on open government.

State officials can’t say whether the 648 deaths were included in the tally of Michigan’s 5,600 nursing home deaths. Experts contacted by Bridge said most likely are, but some may not be.

If those vital record deaths are not included in the total, it could mean nursing homes accounted for a far bigger share of the COVID-19 toll. The 648 deaths represent 44 percent of all vital records reviewed in 2020.

With the state reporting just over 7,000 vital record COVID-19 deaths; an extrapolation of 44 percent could indicate nearly 3,100 more nursing home deaths than the 5,600 so far reported.

A nursing home executive in Macomb County said the period covered by the state review of vital record deaths — the first four months of the pandemic — was a time when coronavirus tests were scarce and more positive cases were likely going undetected.

“It would be difficult for a nursing home to miss it under that scenario,” Evans said.

The numbers may be tricky because Michigan allows nursing homes and senior-living facilities to self-report COVID-19 deaths to the state.

Reviewing vital records can take weeks or months, and it’s uncertain whether administrators of the homes were always informed that a post-mortem review concluded their residents died of COVID-19.

Bob Wheaton, a spokesperson for the Michigan Department of Health and Human Services, said nursing homes are “aware” of the COVID-19 deaths which are determined by a vital records review.

But he could not say whether they are automatically included in the total number of nursing home deaths.

Bobby Leddy, a spokesperson for Whitmer, said there is no reason to believe the deaths were undercounted.

"Nursing homes are required by federal law to report deaths of residents as nursing-home associated deaths regardless of whether they occur in a facility or hospital and there are penalties for not doing so," Leddy told Bridge Michigan.

"There is no reason to believe that nursing homes systematically underreported in-hospital deaths in the federally mandated reports, which are available online."

She said she is skeptical the COVID-19 death toll at nursing homes is significantly higher than has been reported.

Although the latest information does not answer all questions about nursing homes, it does provide evidence that more study is needed of the policies used to combat the virus.

“As we look back on this pandemic, it’s worthwhile to know what worked and what didn’t,” Delie said.

Evans acknowledged there are likely more COVID-19 deaths among nursing home residents — and among the population at large — because of the lack of testing. But he said he is tired of trying to assign blame.

“Why are we trying to parse these numbers? Of course we have more deaths,” he said.

Early in the pandemic, for instance, the federal government prioritized hospitals for personal protective gear. That meant his facility and others had a hard time getting masks and other equipment as the pandemic swept metro Detroit.

“Whether you agree with the governor (Whitmer) or not, she was put in a difficult position,” Evans said. 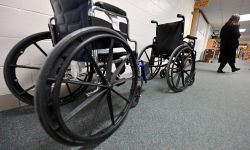