Online event: What will K-12 education in Michigan look like this fall? Join us to discuss.
Michigan school reopening tracker: Find out if your district is starting in person or online

Nine days after releasing a school reopening plan that would allow Michigan students to return to classrooms in the fall, Gov. Gretchen Whitmer tapped the brakes Thursday, saying that if a recent increase in coronavirus cases continues, students might have to stay home.

“We want to be in a position where we can get our kids back in schools in eight weeks,” Whitmer said at a news conference. “On the trajectory we’re on... it’s very much in question.”

Whitmer also reiterated the importance of wearing masks while in indoor public spaces, and indicated she may take actions in the coming days to enforce mask-wearing requirements.

“I feel for businesses that are doing all the right things…these businesses are also asking for tougher rules so that they can point to it and say this is the law,” Whitmer said. “Right now it’s required and for some reason people don’t seem to know that.” 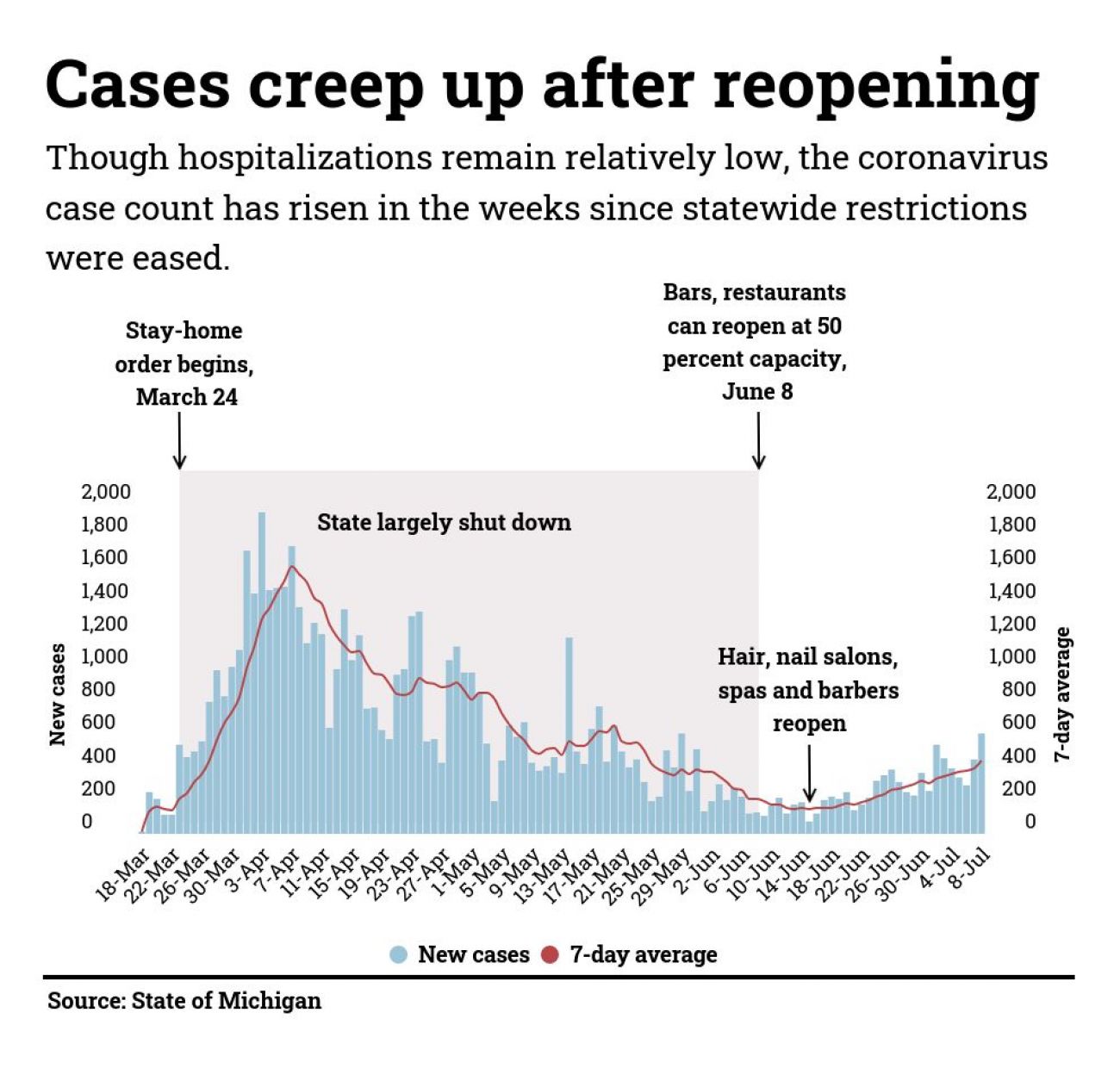 Whitmer’s current executive order requires the wearing of face masks in enclosed areas such as restaurants, bars and retail stores. Law enforcement officials can issue misdemeanors and fines to people and businesses who don’t comply, though there has been little evidence of enforcement.

Whitmer’s caution about school reopening comes at a time when she and other governors are facing pressure from President Donald Trump and U.S. Education Secretary Betsy DeVos, who both have said in recent days that schools should be open for all students every school day this fall, despite the lack of a vaccine for the potentially deadly virus that has so far killed more than 6,000 Michigan residents and 134,000 nationwide.

Trump threatened Wednesday to withhold federal funding for schools that don’t fully reopen, though it was unclear whether that was possible with existing school funding. One possibility that has been floated is that additional federal assistance for schools to cover costs tied to the pandemic could be tied to students rather than schools — with schools not receiving funds for students who aren’t sitting in classrooms.

DeVos said Tuesday that she was “seriously considering” withholding funds from schools with fall plans for online learning or a mix of online and in-person education. She said people who raise concerns about schools spreading COVID-19 are “fear-mongering.”

Some Michigan schools have announced plans for a mix of in-classroom and homebound learning, in an effort to limit the number of students in schools at any one time, allowing schools to keep students six feet apart.

Whitmer’s school reopening plan doesn’t require social-distancing, but schools are allowed to take safety measures above and beyond those required in the plan.

Confirmed new infections, while lower than at the peak of the pandemic in April, have been rising in Michigan over the past month. Wednesday’s one-day total for new cases was 610, the highest in seven weeks. The seven-day average of new daily cases has nearly tripled in the past month.

Appearing on CNN Wednesday, Whitmer said Michigan had to make decisions about school reopening based on science, not politics.

“I’m not sending kids and our education workforce into our schools unless it's safe. It’s that simple,” Whitmer told CNN’s Wolf Blitzer. “The reason Michigan has been able to push our curve down is because we’re listening to scientists. Not threats. Not politicians. We got to make decisions based on keeping people safe.”

Whitmer’s school reopening plan, which she said was crafted in partnership with a 25-member advisory panel of school and health officials, required safety protocols that varied by pandemic phase. Under the current phase (phase 4), all teachers and staff would wear face masks, as well as most students.

If Whitmer moves the state to phase 5, safety protocols are loosened. For example, masks would be “strongly recommended” rather than required. Whitmer said at the time the school reopening plan was announced June 30 that she hoped the state would move to phase 5 before schools reopen in September.

Since that announcement, however, infections have risen.

“I’m concerned,” Whitmer told CNN. “I’m a parent… We’re eight weeks out and we know the trends nationwide are not very good… eight weeks will go by very quickly, and if we don’t get a handle on these fundamentals, it’s going to be very risky to debate whether or not we send kids back into classrooms. As a parent, as a governor, I want to get kids back into in-person instruction, but we can’t do it if it’s not safe. That’s why the actions now really matter.”

At her Tuesday news conference in Lansing, Whitmer said that if Michigan families want their children to be able to go back into classrooms in September, they need to act now: wear face masks, maintain social distance and avoid large gatherings.

Michigan’s school children have been out of classrooms since mid-March in an attempt to slow the spread of COVID-19.

“If the numbers continue to go up, we will have to dial back, and we know what  that looks like because we’ve been there,” Whitmer said.

While hinting at future face mask executive orders if the upward trajectory in coronavirus cases continues, Whitmer said she would rather Michigan residents wear masks because “it’s the right thing to do.”

“The last thing I want to do is be doling out lots of penalties. What we’re trying to do is get people to do the right thing for the right reasons,” Whitmer said, but added “there are perhaps additional steps we can take” to increase compliance, which will be made public in the coming “day or week.”

Coronavirus cases have been rising statewide, with the highest rate hike in Grand Rapids and increases in Detroit, Kalamazoo and Lansing, Chief Medical Executive Dr. Joneigh Khaldun said Thursday. Even the Upper Peninsula is experiencing the highest rate of new cases it’s seen since the coronavirus was discovered in Michigan in March.

That’s been prompted in part by increased contacts among people returning to restaurants, bars and other businesses under eased guidelines after cases fell throughout June. In some instances — such as at Harper’s Restaurant and Brewpub in East Lansing and videos of partygoers at Diamond Lake in Cass County — people have been shown crowding together without masks.

Wearing face masks in public is proven to help slow the spread of the new  coronavirus, especially when combined with hand-washing and social distancing.

Jonathan Oosting and Mike Wilkinson contributed to this report.