Residents of Michigan communities with large African-American populations are disproportionately sickened and killed by the coronavirus, according to a Bridge Magazine analysis of public health data.

Detroit, which is 79 percent African American, has 7 percent of Michigan’s population but 26 percent of the state’s infections and 25 percent of its deaths.

The outbreak so far is centered in southeast Michigan, as Wayne, Oakland and Macomb have 80 percent of the state’s 9,334 cases as of Wednesday. Bridge’s analysis of public records shows:

“There is no question that the COVID-19 outbreak is having a more significant effect on marginalized and poorer communities, particularly communities of color,” Michigan's chief medical executive, Dr. Joneigh Khaldun, told Bridge.

But it’s not just lower-income communities that suffer: Higher-income neighborhoods of northwest Detroit are hit hard, as are upper-middle-class suburbs in Oakland County, according to Bridge’s analysis.

The analysis compared available data on coronavirus cases reported by ZIP code in Oakland County and by community in Wayne County with census data. Macomb County initially released demographic data on coronavirus patients, but has since stopped and now publishes only a map of hotspots.

Bridge’s analysis was limited because neither the state nor federal government has released information on the race of those with the virus.

That’s a concern to experts who are worried about coronavirus spikes in large communities of color such as Chicago, Milwaukee and New Orleans. Withholding such information makes forming a response harder, according to U.S. Sen. Elizabeth Warren and Rep. Ayanna Pressley, both Massachusetts Democrats, and other lawmakers who are demanding more demographic information.

“Any attempt to contain COVID-19 in the United States will have to address its potential spread in low-income communities of color, first and foremost to protect the lives of people in those communities, but also to slow the spread of the virus in the country as a whole,” Warren wrote in a letter to Alex Azar, secretary of the U.S. Department of Health and Human Services.

“We need to know the impact on African Americans. What is the impact on the black community? Do we have a crisis?” Lawrence said.

“If we see based on data that certain demographics or certain areas in our communities are affected more than others, it gives us the ability to dive in and to bring in the resources to stop the spread.” 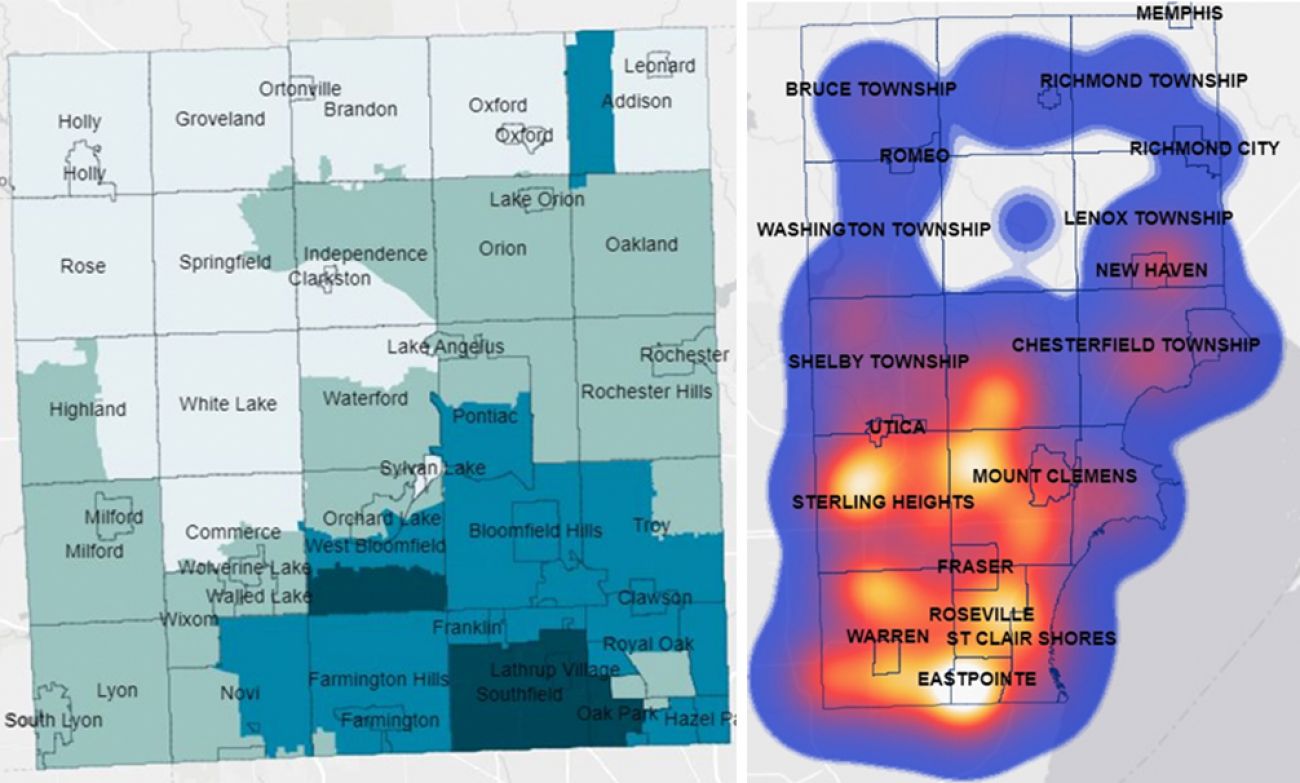 ‘Urban epicenter’ or something else?

The crisis is so new and so devastating that finding definitive answers could take months or years. Experts say there is no reason to believe African Americans are more susceptible to acquiring the coronavirus.

Instead, the virus in Michigan may have begun in metro Detroit — perhaps through Detroit Metro Airport — and spread from the city to suburbs. What’s more, experts caution, a lack of testing means the virus' spread may be understated in predominantly white communities in the northern suburbs.

Dr. Vikas Parekh, associate chief clinical officer for the University of Michigan’s adult hospitals, said the virus is spreading across Michigan in an “urban epicenter model” of infection.

And while maps showing the concentration of the virus in Michigan would confirm that belief, there are numerous exceptions.

Although Detroit has the highest concentration of cases, several suburbs that surround the city have low rates of coronavirus including Dearborn, Melvindale and Grosse Pointe Park.

All are predominantly white.

Tlaib said “it is very clear that structural racism is showing its ugly face during this global pandemic.”

“It is communities of color, especially the African-American community in my district, that you see getting directly impacted,” she said.

Dr. Abdul El-Sayed, an epidemiologist, said even if it was made public, existing data on coronavirus may not illustrate the full effect in communities of color.

“We're testing only people who come in with severe disease,” said El-Sayed, the former health director of the City of Detroit who ran for governor in 2018 as a Democrat.

“Frankly, I think that we would be very much underestimating the burden that this disease has in low-income communities and communities of color.” 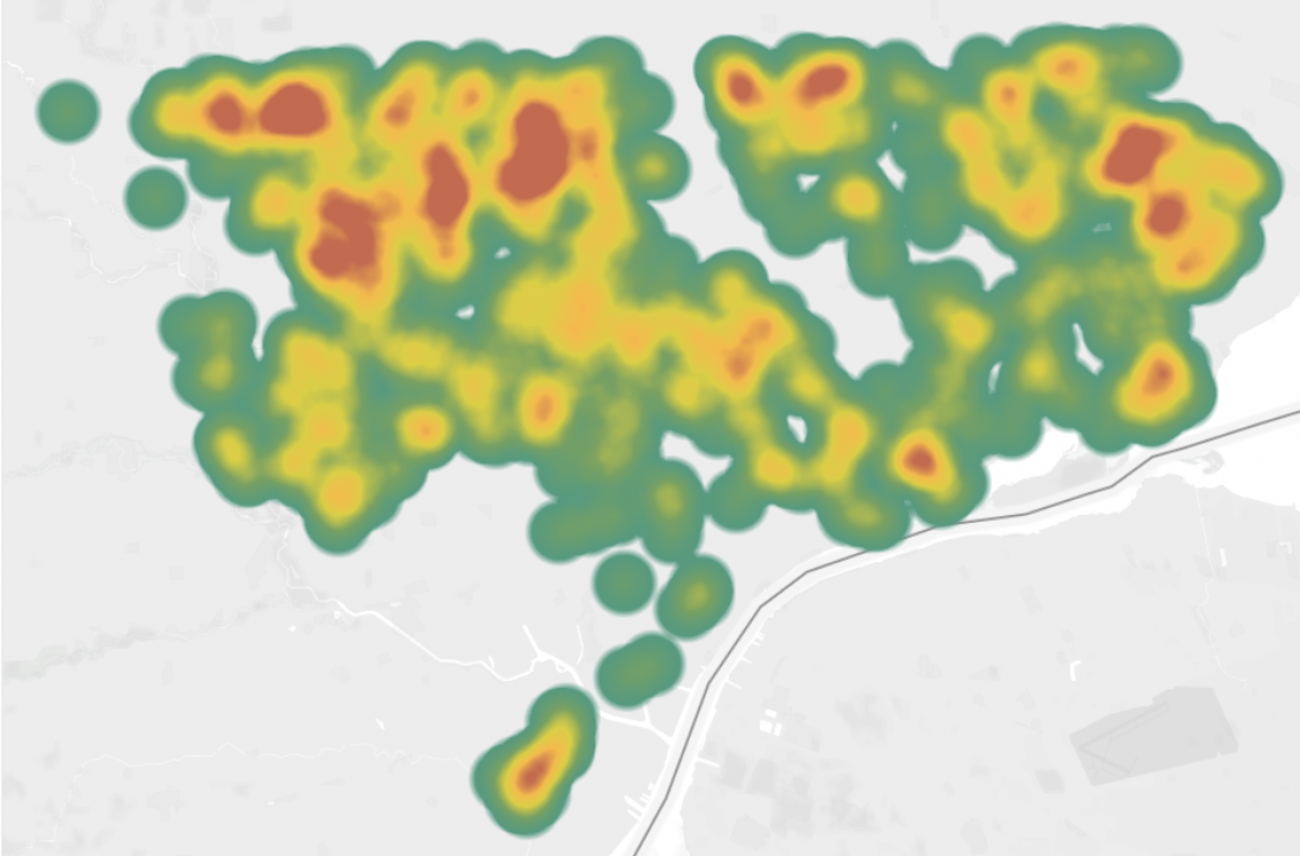 All are black except Robinson.

“All the people I’ve known so far — 80 percent that I know that have passed away [from coronavirus] — have been black males,” Carter said.

But several Detroiters told Bridge that the city is being accused of spreading the virus in part because of a handful of social media videos that showed residents congregating long after Gov. Gretchen Whitmer issued stay-at-home orders.

“People keep saying black parties spread this. [In fact,] the government was unprepared,” said Williams, who has four friends and relatives who have died of the virus.

“I guess black lives don’t really matter. If people are dying more in Detroit, maybe that’s why there is more attention.”

As of Wednesday, 83 people have died in Detroit, a city of 670,000. Oakland County, which has nearly twice the population, has 99 deaths.

Several epidemiologists and public health experts told Bridge that releasing data on coronavirus cases could help target resources, but others warned it could harm communities of color.

The possibility that “this data could then be used to further discriminate ... is really something that we should be thinking about,” said Melissa Creary, an assistant professor of health policy at the University of Michigan.

“It’s the threat of being able to link those patterns to whole populations and create a narrative of fear, unworthiness or uncleanliness, whatever it may be, that’s really the part we want to avoid.”

Detroit Mayor Mike Duggan said the media has unfairly put the city in the spotlight.

“It’s been kind of disturbing to me to see stories written about ‘Why is Detroit a hotspot?’ with all kinds of theories about poverty and people not taking care of their health,” Duggan said Wednesday.

“One of the wealthiest communities in New York, New Rochelle, had the first major outbreak on the East Coast. Middlesex County in Massachusetts — a very well-off county — has a significant outbreak of coronavirus.”

Although African Americans are likely not inherently more susceptible to getting the virus, many health experts said underlying health issues could make symptoms worse.

“African Americans have historically been more likely to have higher rates of chronic medical conditions such as heart disease, diabetes and cancer in the United States,” Khaldun said.

“We know that people with these underlying medical conditions are more likely to become severely ill from COVID-19.”

That was 19 days after the state confirmed its first cases of the coronavirus. By then, Detroit already had more than 1,500 cases.

State radio advertisements about the stay-at-home order in Arabic and Spanish are expected to start this week.

The cause of the delay is unclear but it’s likely because the state was scrambling to respond to the virus, said Brenda Jegede, director of the Office of Equity and Minority Health for Michigan’s Department of Health and Human Services.

Others said the message among African Americans has been blunted because churches have closed amid the crisis.

“We don’t have that channel available to us right now,” said Bill Nowling, a spokesman for Wayne County Executive Warren Evans and recently recovered from the coronavirus.

Matthew Seeger, a communications professor at Wayne State University who has worked with the U.S. Centers for Disease Control and Prevention, said public health officials must tailor messages to different audiences by using different media.

He said Whitmer, Duggan and Evans have done an “exceptional job” so far.

Even with the messaging, self-isolation and social distancing can be difficult for those who don’t have money or space for three weeks of food or need public transportation, said Linda Smith, executive director of the U-SNAP-BAC housing nonprofit in Detroit.

Many low-income people have jobs without paid sick time, or are uninsured and may be hesitant to seek health care due to costs.

“There’s a truism in epidemiology that the poorest and most marginalized people in any society are always going to get hit hardest by the health challenges that a society faces,” said El-Sayed, the former city health director.

“They’re starting to bear out in the pattern of this disease.”