“When she gets sick,” the doctor explained to the girl’s mom, “her sugar levels plummet. And that’s where things like metabolic strokes happen.”

Brittish has complex health problems stemming from a genetic metabolic condition. Contracting COVID-19 would likely make those problems worse. Better to watch for mild side effects from the vaccine than chance life-threatening complications from COVID that could last a week or more, Bush advised. 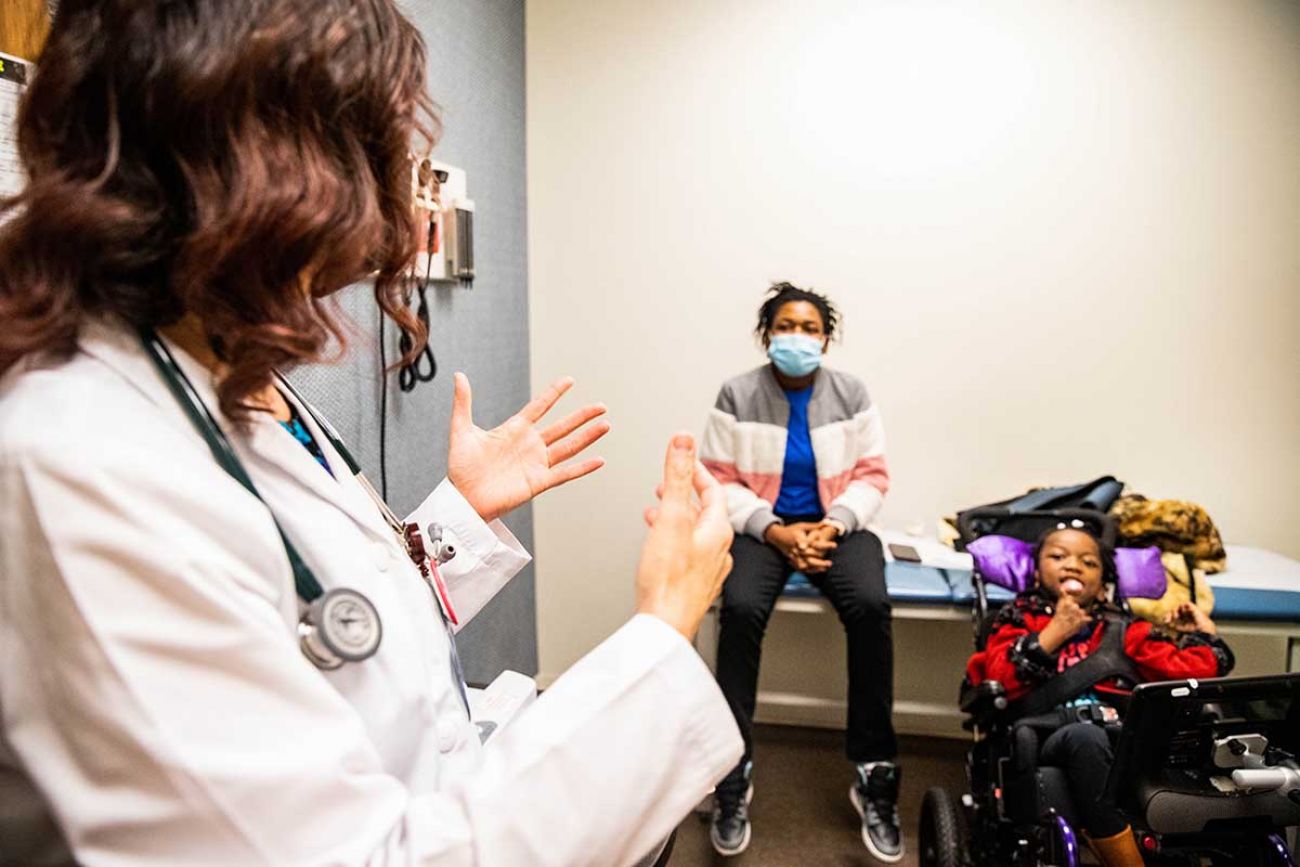 Nekaira Conway, 26, the girl’s mother, nodded in agreement, convinced by the doctor that a new Pfizer pediatric vaccine was right for Brittish, even though the mom herself has not received one.

“Her health is way more important than my opinion,” said Conway, a resident of Rockford. “Doctors know way more than I know when it comes to the vaccine and children.”

The conversation between pediatrician and mom, which took place Tuesday in the Cherry Health—Heart of the City clinic in Grand Rapids, is one likely to be repeated in doctors’ offices and clinics across Michigan in the coming weeks.

Late Tuesday, the Centers for Disease Control and Prevention gave the green light to the two-dose Pfizer vaccine for 5- to 11-year-olds, opening eligibility to more than 825,000 Michigan children and 28 million across the nation.

Now, pediatricians and public health leaders face the daunting task of convincing worried parents the vaccine is not only safe and effective, but necessary for elementary school-aged children who are among the least likely to suffer the worst of COVID.

Health authorities note that the urgency is heightened as the weather turns cold and children spend more time indoors, with classmates and at home. Children who get the first of the two-dose Pfizer vaccine in the next couple weeks will have some protection by Thanksgiving and be fully vaccinated by Christmas Day.

But a survey by KFF (The Kaiser Family Foundation) last month found just 27 percent of parents nationally were eager to vaccinate children 5 to 11, while about a third said they would take a wait-and-see approach and 30 percent said they would not vaccinate their children. The message was clear: Many parents who are otherwise supportive of COVID vaccines were not quite ready to sign off for younger children.

This group includes Amber Brown, 32, of Grand Rapids, who like Conway allowed Bridge Michigan to be present as she asked the doctor questions about the vaccine. Brown is vaccinated, as is her 13-year-old daughter. But her 9-year-old? Brown said she likely will wait until the girl turns 12 — worried about what she’s heard from a relative that the vaccine can jeopardize children’s future fertility — a myth perpetuated with nearly every vaccine, Dr. Bush told Brown.

Brown said she’s not sure why, but she feels it would be safer if kids hit puberty first.

Bush explained that the adult COVID vaccine has been given to thousands of pregnant women without problem. Had there been a fertility issue, the vaccine would have triggered miscarriages, she said.

“We can agree to disagree,” the doctor told Brown with a smile, as Brown’s little boy, 4-year-old Terrence, threaded himself between his mom’s arms and legs.

Bush urged the mom to do more reading and “see if you can find a grain of truth in what you’ve heard, but I don’t think you will.”

“This is the bread and butter piece of pediatrics. We’re not new to the game when it comes to immunizing folks,” he said Wednesday at an online meeting  of the Michigan Primary Care Association, a network of clinics throughout the state primarily serving under- or uninsured patients.

He said it’s important to frame the conversations not as “a debate with folks on what's right or wrong, but what is needed and what is necessary and safe.”

The CDC, the Food and Drug Administration and a host of national medical groups have all concluded the child version of the Pfizer vaccine is safe for young children. Pfizer’s own study showed the vaccine is more than 90 percent effective for this age group. Another COVID vaccine manufacturer, Moderna, is soon expected to seek final approval of its pediatric vaccine as well./p>

Encouraged by the Biden administration, many Michigan health providers had already submitted orders before Pfizer’s approval late Tuesday. State  providers ordered more than 416,000 doses as of Wednesday morning, according to the state health department. Of those, 190,000 are heading to local health departments, and 224,000 are arriving at hospitals, pharmacies and pediatricians’ offices. About 2,400 are going to federally-qualified health clinics, which primarily serve Michigan’s low-income residents, and to tribal clinics, the state health department said.

At a media event early Wednesday, state health leaders pleaded with parents to get their children vaccinated.

A review by the FDA found the benefits of the vaccine in protecting youngsters against COVID outweigh any risks from vaccine side effects, Dr. Matthew Hornik, president of the Michigan Academy of Pediatrics said at the news conference.

“The virus itself is more of an unknown than the vaccine,” Hornik said. “We have the data on the vaccine, and we have hundreds of millions of people that have gotten the vaccine. But this rapidly-changing virus is the one that's a little bit more unknown.”

The child vaccine has been long awaited, as Michigan faces an increase in childhood infections, including those connected to a jump in outbreaks in Michigan schools. Of more than 66,000 confirmed Michigan cases involving children aged 9 and younger during the pandemic, more than 3 in 10 have occurred in the past two months, according to a Bridge analysis.

Katie Deck of Howell was among those parents working the phones Wednesday, as she tried to nail down an appointment for her 6-year-old daughter at a nearby Meijer pharmacy.

The three closest Meijer pharmacies were booked up. “The closest with (available) appointments was 45 minutes away,” Deck said.

Now, she’s hoping to get her daughter a first dose at her pediatrician’s office, perhaps as soon as Friday.

“We know that COVID doesn’t affect children as much as adults, but … being a pediatric nurse (at C.S. Mott Children's Hospital in Ann Arbor), I’ve seen COVID cause some severe issues in children who were previously healthy,” Deck said.

“We know children spread COVID, and we want to do our part to control the spread as much as we can in our community,” Deck said.

“The logistics are no different than for our other clinics,” said Bill Mullan, spokesman for Oakland County, where the health department ordered 14,400 doses. “But what is different is that you now have a 5-year-old. Our task is to make the environment as familiar and comfortable as possible.”

For others, there are questions first.

But through an interpreter, she asked Dr. Bush about the dosing and about side effects as 9-year-old Jesus Ramirez Menseses sat quietly, his hands clasped in his lap, wriggling at times in his Superman T-shirt. 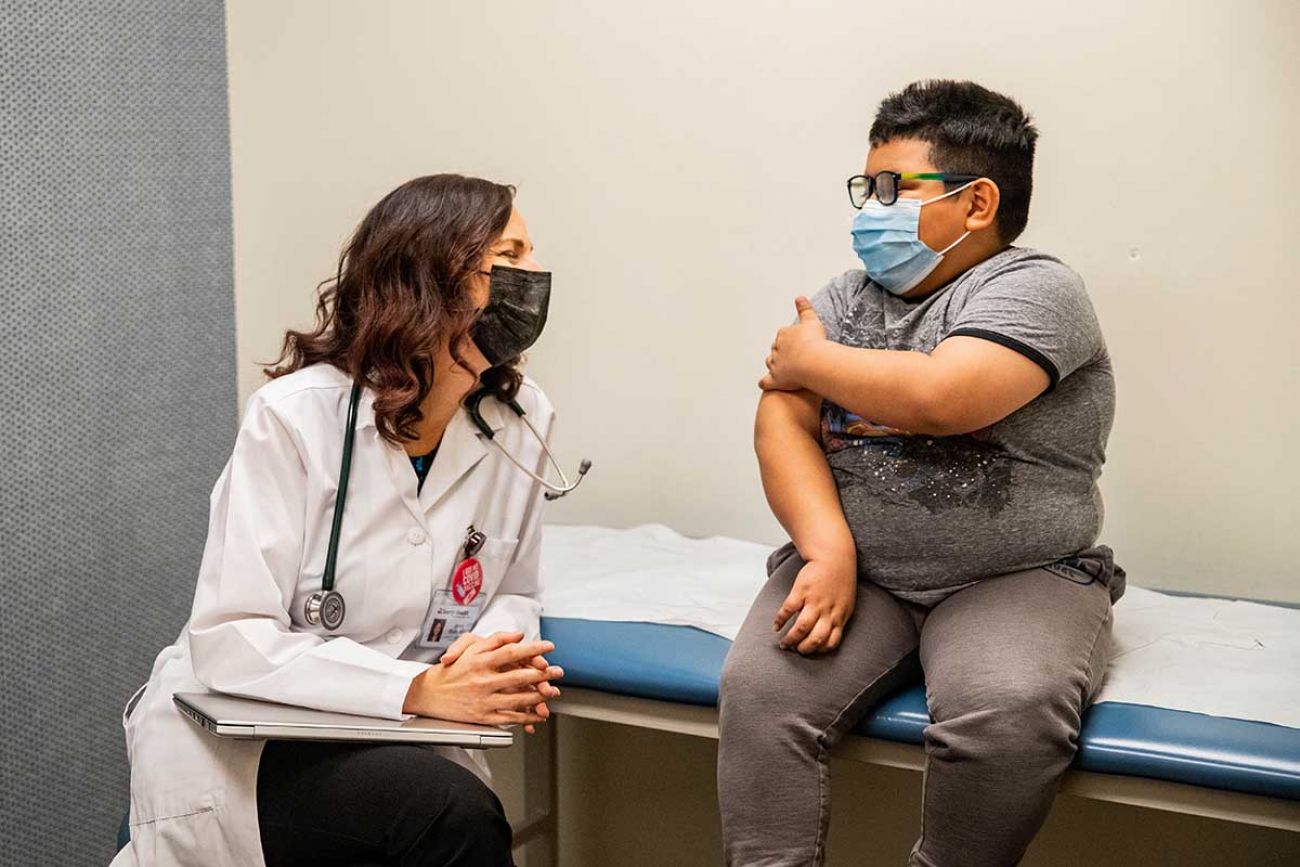 Bush explained that the child version is one-third the dose that a teenager gets. Side effects were mostly mild — fever and chills, and the rates of side effects are even lower among the youngest children, Bush said.

Mendoza Menseses began nodding. She and her teens already are vaccinated, she said.

“So you'll all be vaccinated. That will feel good, won’t it?” Bush said.

Jesus’ left hand shot up to rub his upper right arm, shaking his head as if refusing an imaginary jab. The room erupted in laughter.

After several minutes, Mendoza Menseses, too, was reassured. She wants her children to attend school without having to worry so much about COVID and its disruption to their lives.

(Last month, the American Academy of Pediatrics declared COVID’s toll had become a national emergency for children’s mental health, noting that clinicians are “caring for young people with soaring rates of depression, anxiety, trauma, loneliness, and suicidality that will have lasting impacts on them, their families, and their communities.”)

“I wasn't too sure if I wanted them to get it or not,” Mendoza said as she wrapped up the appointment with Bush, “but I started thinking about it, and I said, ‘Well, what if they’re in school, they get sick, and then they end up with COVID?’

“So then that's when I decided to get them a vaccine — for their safety.”