As COVID-19 patients pack Michigan’s hospitals, other sick Michiganders are skipping waiting rooms and turning to their cell phones for medical advice.

It’s not clear how much medicine in Michigan has shifted onto tiny screens since the first two coronavirus cases were detected March 10. But Michigan medical professionals say the percentage of consultations they are conducting by phone or laptop has shot up in the past month.

“Now it's nine or 10 a day. It has exploded,” said Gorz, 34. “I think before it was seen as a novelty for certain generations.”

Among the patients Gorz saw recently was a 2-year-old with teething pain (and her mother), octogenarians with questions about medications, and patients with COVID-19 symptoms — some who could recuperate at home, some Gorz brought in for testing and a few he sent to the hospital.

Certainly, telehealth has its limitations, Gorz and others acknowledge. One Michigan physician went so far as to call it “sloppy medicine.”

Yet Gorz said the upside is that some patients are more open with him remotely, discussing their ailments as they sit in their living room or at the kitchen table. Plus, spouses often pipe up with critical information — a husband who’s snoring could have serious health implications, for example.

“I have lots of tools in my tool kit — my EKG machine, my stethoscope,” he said. “Can a cell phone listen to lungs? No. Can it test urine for a [urinary tract infection?] No. But my biggest tool is when I set down the pen and just listen.”

“The patients want it. The doctors want it. Everybody wants it,” Passerman said of telehealth. “We have been able to transform our delivery care model literally overnight to provide a highly virtual component to what we’re doing.”

Virtual medicine isn’t new, but it hasn’t been widely used.

Some hospitals and practices have offered virtual visits for years, allowing an on-call nurse or physician, for example, to view a rash remotely and determine whether over-the-counter cream could help sidestep an inconvenient and possibly pricey run to the doctor’s office.

And virtual health had been used to connect patients in rural areas with specialists miles away — say, a child psychologist in lower Michigan with a young patient in the Upper Peninsula.

In fact, until COVID-19 spread to Michigan, the state’s Medicaid plan reimbursed providers only if the virtual consultation occurred from approved “originating sites,” such as primary care offices where a patient would meet a specialist remotely. 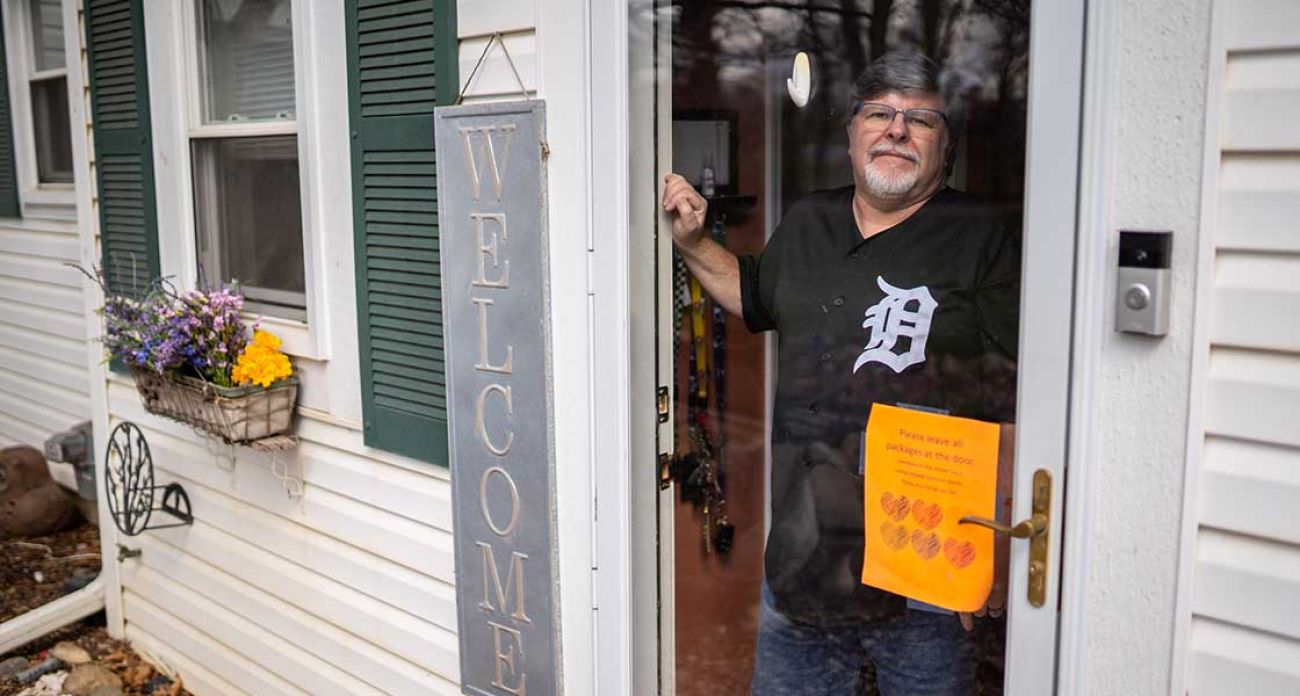 The initial program was successful, but others in MedNetOne’s didn’t bite,  Matuszewski said.

“Most physicians felt that there was just too much. It was cumbersome,” she said.

Even if doctors embraced the technology, patients were suspicious, not only of the technology itself, but of giving up an in-person visit, she said.

“And then came COVID-19,” Matuszewsk said.

By mid-March, patients with COVID-19 symptoms were lighting up phones at doctors’ offices, desperate to know if their cough was potentially deadly COVID-19 or just a cough.

Doctors, meanwhile, wanted to keep COVID-19 from infecting others in their waiting rooms.

Thus began the scramble to reschedule non-emergency appointments and shift others to long-distance medicine.

Chuck Robinett was admitted to the hospital in early March with chest pains. For the next six nights, the Clarkston man underwent a battery of tests.

Unexpectedly, he was told to leave.

Robinett, 59, recalled a nurse telling him that “the virus is starting to heat up and you have to follow up with the oncologist and with your primary doctor, and they probably won’t be able to see you.”

Nightly check ups followed instead by phone. Robinett gave his doctor updates on how he was feeling, and his doctor reminded Robinett to stay in his Clarkston home because his immune system had been compromised. 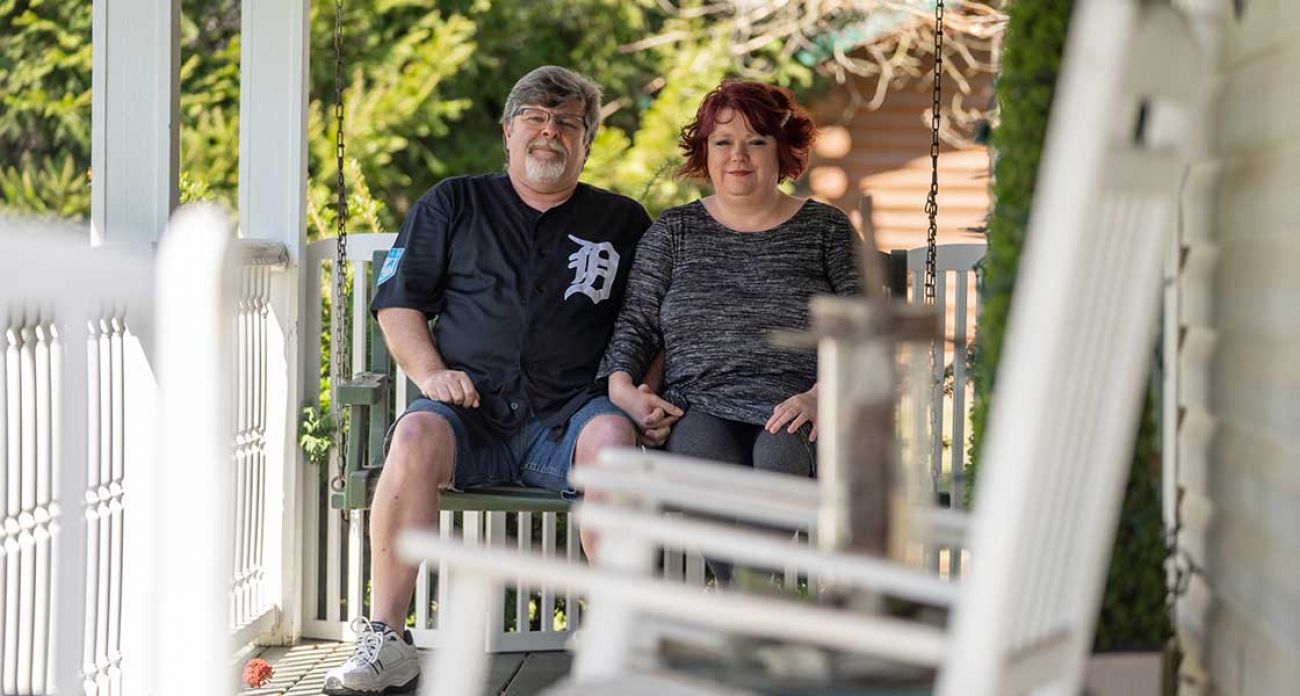 Robinett ventured out after a bone marrow biopsy was ordered at DMC’s Huron Valley-Sinai Hospital.

He was startled at what seemed an overnight change: Just one hospital entrance was open. He was screened at the door, given hand sanitizer and his temperature taken. Questions followed: Have you been out of the country? Do you have any symptoms of the coronavirus?

After that experience, Robinett’s wife, Kristy, said that, at least during this pandemic, telemedicine is a stress-reliever.

“The telehealth kind of alleviates that anxiety without being jumped on or afraid that you’re going to get something from one of the employees, because you don’t know where they have been either, or who have they have been in contact with,” said Kristy Robinett.

Early on, as COVID-19 began seeping throughout the state, the state’s insurers made telehealth easier.

Blue Cross Blue Shield of Michigan, HAP, Priority Health and other health insurers have waived co-pays on telehealth services, and they  guaranteed reimbursement for providers.

The state, meanwhile, has relaxed Medicaid restrictions within the complicated world of medical billing to temporarily allow doctors to be reimbursed in some instances for traditional phone calls. It also suspended requirements that patients travel to an “originating site” — a clinic, for example — to have a virtual visit with a doctor elsewhere.

It’s not clear how long the state’s changes will be in place.

Additionally, the physician must feel assured, however, that the conversation is private, said Laura Kilfoyle in the Michigan Department of Health and Human Services Medicaid Policy Division.

“We're not envisioning the patient sitting at Starbucks,” she said.

Michigan’s Medicaid reimburses clinicians for patient care at the same rate, whether the visit is in-person or long-distance, Kilfoyle said.

In the commercial market, however, reimbursements for telehealth visits generally are lower because reimbursements for in-person visits must cover additional costs, such as front desk staff and rent, said Jeff Romback, Michigan Association of Health Plans, which represents most of Michigan’s largest insurers. They also vary, depending on the contract between physicians and insurers.

Earlier this month, Romback was moving around child seats in the family car when his 5-year-old daughter bumped her head on the car as she ran toward him.

Romback punched up the telehealth line for McLaren Health, showed the on-call doctor the fresh gash, and was assured she could heal without a trip to urgent care. The call saved the family both the co-pay and the worry of being exposed to COVID-19 in an urgent care waiting room, he said.

“It’s an underutilized benefit,” he said.

Henry Ford’s Passerman, like others, notes that long-distance medicine can do only so much.

“You don’t get as much information as an in-person visit because you can’t feel the abdomen, you can’t do other exam-type things, (and) you can’t test muscle strength in neurologic exams,” he said.

It can also be impersonal.

By phone in early April, Robinett learned he had multiple myeloma, a cancer of plasma cells in the blood.

The doctor who shared the bitter news also told the Robinetts he — the doctor — had tested positive for COVID-19 that very same day. It brought everything full circle for the Robinetts.

In “a minor situation,” telehealth can be a “great thing,” Kristy Robinett said. “But for Chuck’s situation, it’s scary without having that one-on-one.”

Dr. Greg Naman has reservations about telecare even as his practice, EPIC Primary Care, has moved toward its widespread adoption in wake of the COVID-19 spread.

In recent weeks, the share of patient consultations on video has surged from around 15 percent to 90 percent at Naman’s office.

“Now with COVID,” he said, “everybody has been forced to move this way.”

“It’s like driving a car without all of the instrument panel in front of you, Naman said. You don’t know exactly how fast you’re going. You’re just gauge it from other cars around you.”

The HIPAA-compliant technology can be clunky. X-Rays and EKGs still need to be performed on site. And many elderly and poor Michganders may not be able to access the smart-phone technology, Naman said.

But during the pandemic when patients rightly worry about leaving home, telehealth has a diagnostic value, and can help allay anxiety, said MedNetOne’s Matuszewski.

In crisis, “what we're finding is it's not really important to know everything about a patient” to help them, she said. “What we are dealing with now is a lot of anxiety and fear, and if you have a physician or a healthcare professional you can reach, they can often calm those fears.”