Dec. 17: See where Michigan is shipping coronavirus vaccine, who is getting it

A COVID-19 vaccine moved much closer to reality Thursday after an advisory committee recommended its approval by the U.S. Food and Drug Administration following a nine-hour hearing.

Full approval of the Pfizer vaccine could come as soon as Friday, and Michigan officials on Thursday received word the state will receive 250,000 total vaccine doses from Pfizer and another company.

That’s a sliver of what’s needed in a state where the virus has killed 10,395 Michiganders and infected at least 421,137 as of Thursday, but it’s widely viewed as a turning point in the pandemic.

Members of an FDA advisory committee voted 17-4, with one abstention, to recommend the vaccine, following debate about its safety and efficacy.

Although the Pfizer vaccine, which was developed in partnership with German-based BioNTech, was fast-tracked, it still must meet a “high bar for efficacy” and the process must be “transparent, scientifically sound and data driven,” Doran Fink, the FDA’s deputy director of vaccines and related products applications, said in explaining the FDA’s emergency use authorization approval process

But other speakers noted there was just two months of data and wondered how that can guarantee safety, particularly those who are 75 and older,  have HIV, or are vulnerable to severe allergic reactions. They want to know more about the vaccine’s effect on minorities and on pregnant women.

“We really don't know what short- and long-term harms are given the short duration” of data, said Kim Witczak, a consumer advocate for drug safety.

But others argued that the safety and efficacy data so far outweighed the risks of the vaccine, especially with a virus that already has killed more than 1.5 million people worldwide.

Approval of a second vaccine, made by Massachusetts-based Moderna, could come next week.

So what does all of this mean in Michigan? The answers, though far from complete, are beginning to take shape.

How soon will the vaccine arrive in Michigan?

On Thursday, the Michigan Department of Health and Human Services revealed that it has been told that the state’s first batches will include 84,825 doses of the Pfizer vaccine and 173,600 of the Moderna vaccine.

But state health spokesperson Lynn Sutfin noted that the estimates have previously fluctuated. She also declined to offer any specifics on where or when they will arrive or say whether they already had arrived, citing security concerns.

She would only say that some 300 sites — from hospitals to health departments to health clinics — are now signed up as part of the eventual distribution network.

When will the vaccine be shipped?

Pfizer plans to ship out the first doses from its sprawling manufacturing plant outside Kalamazoo “within hours” of final approval by the FDA, company officials said.

Pfizer expects to supply more than 33 million U.S doses by the end of the year and 100 million for national distribution by spring.

According to Pfizer officials, the Trump administration in summer passed up a chance to order another 100 million doses. That could slow its distribution to the general public.

When will I get the vaccine?

That depends on your age, underlying health conditions and your exposure risk to individuals with COVID-19. And on how well the vaccine supply chain proceeds in the coming months.

To put that in perspective, there’s an estimated 602,000 health care workers in Michigan.

Members of the general public who do not fall into those categories likely won’t get a vaccine for several months — ”late winter or into the spring,” Dr. Arnold Monto said last week during an hour-long online discussion. Monto, an infectious disease expert, chairs the FDA advisory committee for the COVID-19 vaccine.

How will the vaccines be distributed?

Even after the vaccine arrives, distribution will be a heavy logistical lift, Anita Patel, deputy of the CDC’s Vaccine Task Force, told the FDA advisory committee Thursday.

It’s also shipped in quantities of no less than 975 doses — a challenge in rural areas that can neither store large doses of the vaccine in specialized freezers nor quickly distribute them, Patel said.

Michigan’s 45 local health departments will also play a key role in community distribution, as vaccines will be shipped there as the campaign moves beyond the first phase in hospitals and nursing homes.

Linda Vail, health officer for the Ingham County Health Department, told Bridge Michigan it is building on partnerships for community vaccination it established with the H1N1 flu pandemic of 2009.

“I’m not actually concerned about reaching people. We did that with H1N1,” Vail said.

“I’m concerned about multiple different kinds of people who have hesitancy about the vaccine. That is the greater work with this vaccine.”

Is the vaccine safe?

That was central to the discussion Thursday in front of the FDA’s advisory committee, which voted on this question: Do the benefits of the Pfizer vaccine outweigh its risks for people 16 and older?

He and others noted throughout the meeting that trials will continue to monitor the vaccine.

“What we have is clear evidence of the benefit. All we have on the other side is theoretical risk,” Offit said.

When will kids get this vaccine?

Studies have excluded young children so far, and it's not clear how they may react to the dose amounts recommended for adults.

They react differently, in fact, to the virus. In rare cases, children infected with the COVID-19 virus have uniquely developed Multisystem Inflammatory Syndrome, or MIS-C, which can lead to organ failure. Most cases of MIS-C have been reported before the age of 14, according to the most recent data by the CDC.

“I would predict that, as we go forward, we may well slowly use the vaccines in older children,” Monto said last week.

But during the Thursday committee hearing, the concern for these teenagers was apparent, when some committee members said they would recommend vaccine approval, but only for those 18 and older.

Will the vaccine be mandatory?

That said, it’s not clear whether employers may require the vaccine — much like some health care providers require flu shots of their employees, or what kind of pushback they’d face. 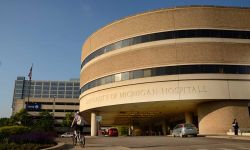 University of Michigan postpones surgical procedures because of COVID-19 surge