He had dementia and COVID. She wanted to hold him when he died.

Michigan Health Watch
He had dementia and COVID. She wanted to hold him when he died.

KALAMAZOO—Jerry Zeiger tested positive for COVID on a Tuesday.

The next day, the hulking former engineer with late-stage Alzheimer’s is tucked under a soft brown blanket at Sue’s Loving Care, an adult foster home in Kalamazoo.

He is 73. Outside his screened window, the woman he shared truckstop coffee with on their first date teeters on a step ladder on a raw November day.

Unable to touch her husband, Melanie Zeiger interlaces her fingers in the tubing connected to her own small oxygen tank.

“Our hearts are intertwined forever, Jerry,” she tells him.

She leans in, her voice barely audible. “I don’t want you to get a chill, so I won’t keep you much longer, but I wanted to visit my Marine. It’s Veterans Day.”

Moments later, she makes her way over crunching, dried leaves in the yard. She is sobbing.

Melanie Zeiger, 66, is bone-thin and bone-tired. Grief-stricken, she is fighting being guilt-ridden, too, having decided to remain separated from Jerry to avoid the virus.

“I know his love for me is like my love for him,” she says. “He would not want me exposed.”

Melanie is awaiting heart surgery. Doctors tell her she needs to put on another 13 pounds before they’ll operate. She has a rehab session with a respiratory therapist the next day. 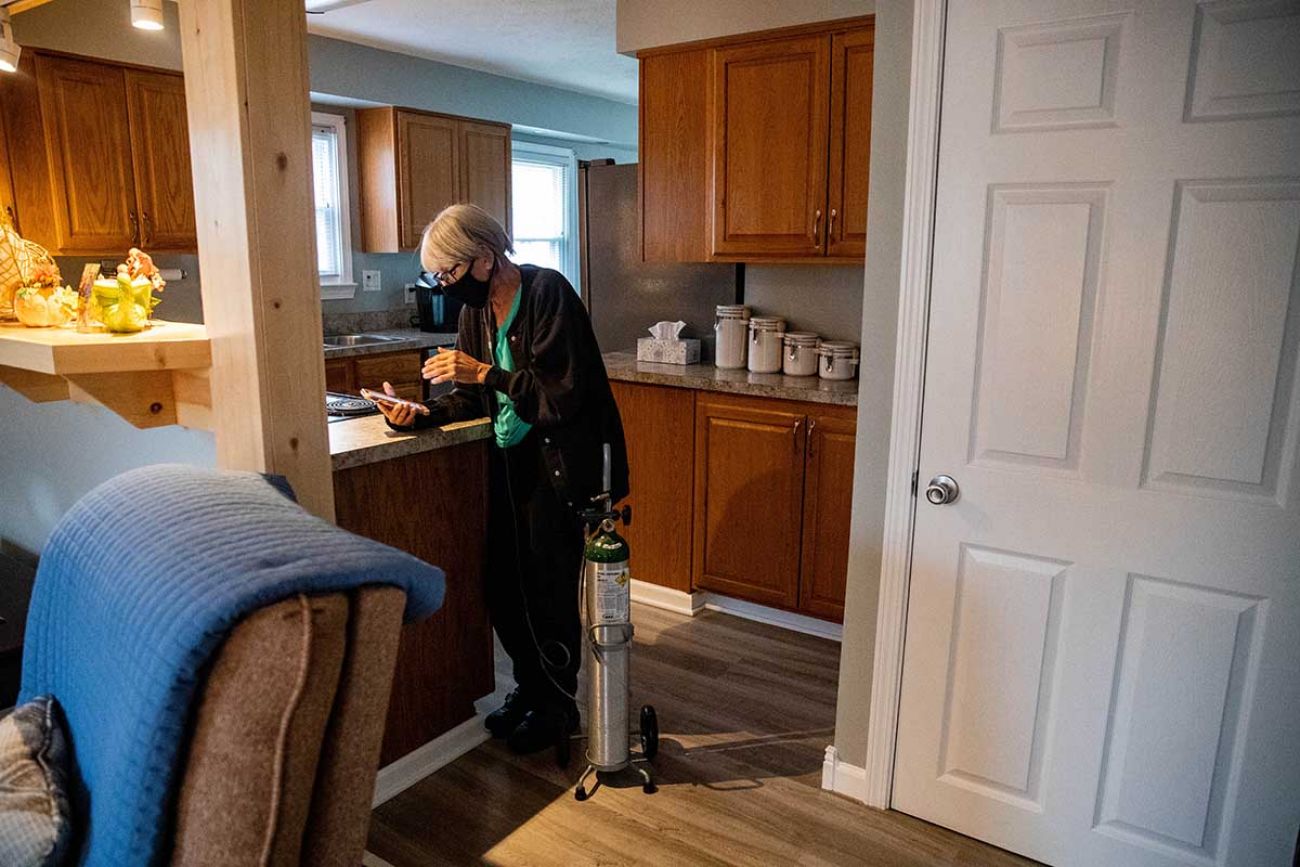 And if she were to get infected with COVID?

“I can’t go to rehab. And if I don't go to rehab, I don’t get my heart surgery that will save my life.”

But she makes herself a promise: When Jerry reaches his final hours, she will rush to be at his side. No matter the risk.

The couple’s encounter — intimate, yet just out of reach — will ring familiar to thousands of families with loved ones in long-term care.

COVID is once again tearing through senior homes. Many facilities won’t allow human touch, leaving people like Jerry Zeiger to wave wanly through windows as spouses or children stand outside. Many residents are dying, often alone.

Michigan reported 166 deaths at long-term care facilities over one week in early November — indeed, 60 percent of all Michigan COVID deaths that week were in long-term care. Over that same period, nearly 1,000 patients and more than 1,000 staff tested positive.

The state’s long-term care centers — which include nursing homes, assisted-living, homes for the aged and adult foster care — have made a flurry of changes since the pandemic struck, from lockdowns on visitation to stronger sanitizing measures, resident isolation and stepped up coronavirus testing.

Along the way, these facilities and those who monitor their performance have learned some hard, even surprising truths. As it turns out, some traditional metrics for judging safety — past inspection violations or star ratings — are not great predictors of COVID’s spread. 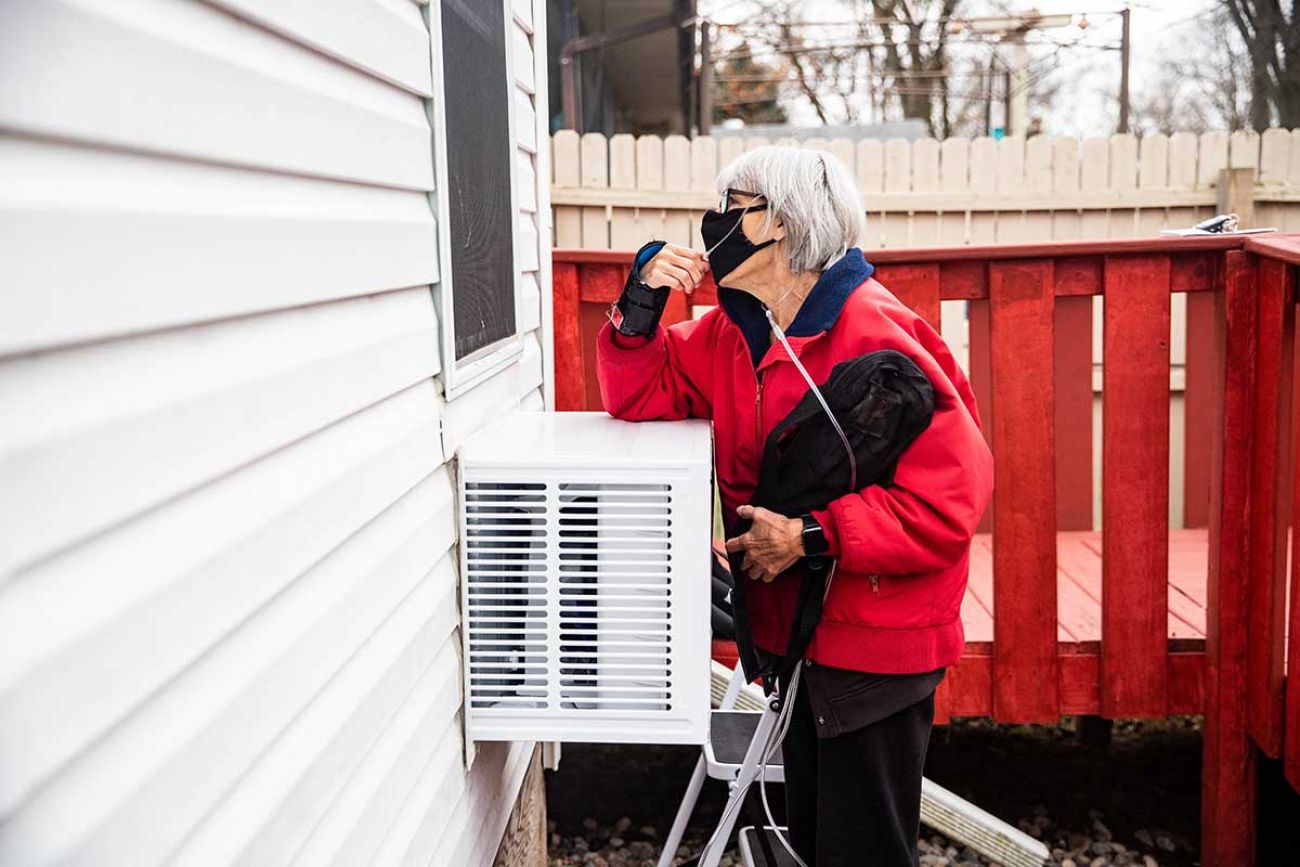 “Maybe the families are bringing it in, or maybe they're taking the residents out and having small gatherings … going to a birthday or to a wedding,” said Dr. Jane Straker, research director at the Scripps Gerontology Center at Miami University in Ohio.

“If we don't slow it in the community, you're not gonna control it in any setting,” Straker said. “It's not nursing homes. It's anything. It's high school sports. It's schools. It's prisons. It's any place where we have people getting together.”

The Midwest is especially vulnerable, with nearly half of all COVID infections at long-term care facilities in the U.S., according to the American Health Care Association and National Center for Assisted Living.

“Our worst fears have come true,” said the groups’ president and CEO Mark Parkinson. “As COVID has run rampant across the country, nursing homes have become powerless to keep it from entering into our buildings.”

Without the public’s help “we just can’t win this fight.”

Like many with loved ones in long-term care, Melanie Zeiger spent much of this year on the outside. She found herself calling, emailing and hoping to see Jerry over the months he lived at an assisted-living facility. The home had banned nearly all visitation — which left staff “heartbroken,” too, the center’s enrichment director told Bridge Michigan in June.

Complicating matters was the Alzheimer’s that had chipped away at Jerry’s memory. Melanie tried a window visit in June, but Jerry’s hands scraped at the window trying to reach her, “almost like a caged animal,” she recalled.

Separation protocols may keep dementia patients safer but, as families and caregivers have noted, many seem to die from loneliness.

A new place to call home

In September, Melanie found peace when she was able to move Jerry to Sue’s Loving Care, a small home with 10 residents. Tucked in a residential neighborhood in north Kalamazoo, it houses residents whose minds have been stripped by dementia.

Her family makes up much of the 9-person staff. Dornan said she thinks of her staff as the kind of caregivers that see the confused wondering of an elderly person looking for a long-dead parent not as an inconvenience, but as an opportunity to walk alongside them in their world and validate their feelings.

“It’s a great privilege to do this work,” Dornan said.

Residents are free to wander and see each other. This, she said, is their home. Keeping them captive in their rooms would be cruel and terrifying.

But she, too, was worried about COVID-19.

She said staff spent much of the summer doing extra cleaning. They set aside a room bisected with plexiglass, so visitors could enter from an exterior door and see residents who entered from the inside.

A small hole in the plexiglass allowed hand-holding. Gloves and sanitizer are on the counter.

“She told me almost right away ‘You can see Jerry whenever you want,’” Melanie said of Dornan. “You have no idea what that meant to me.”

For several weeks, the couple reconnected, often sitting outside in the quiet. One afternoon, Sue snapped a picture of them in a swinging double chair that staff had pulled into the sunlight. Melanie’s hand was wrapped over Jerry’s in the autumn chill. 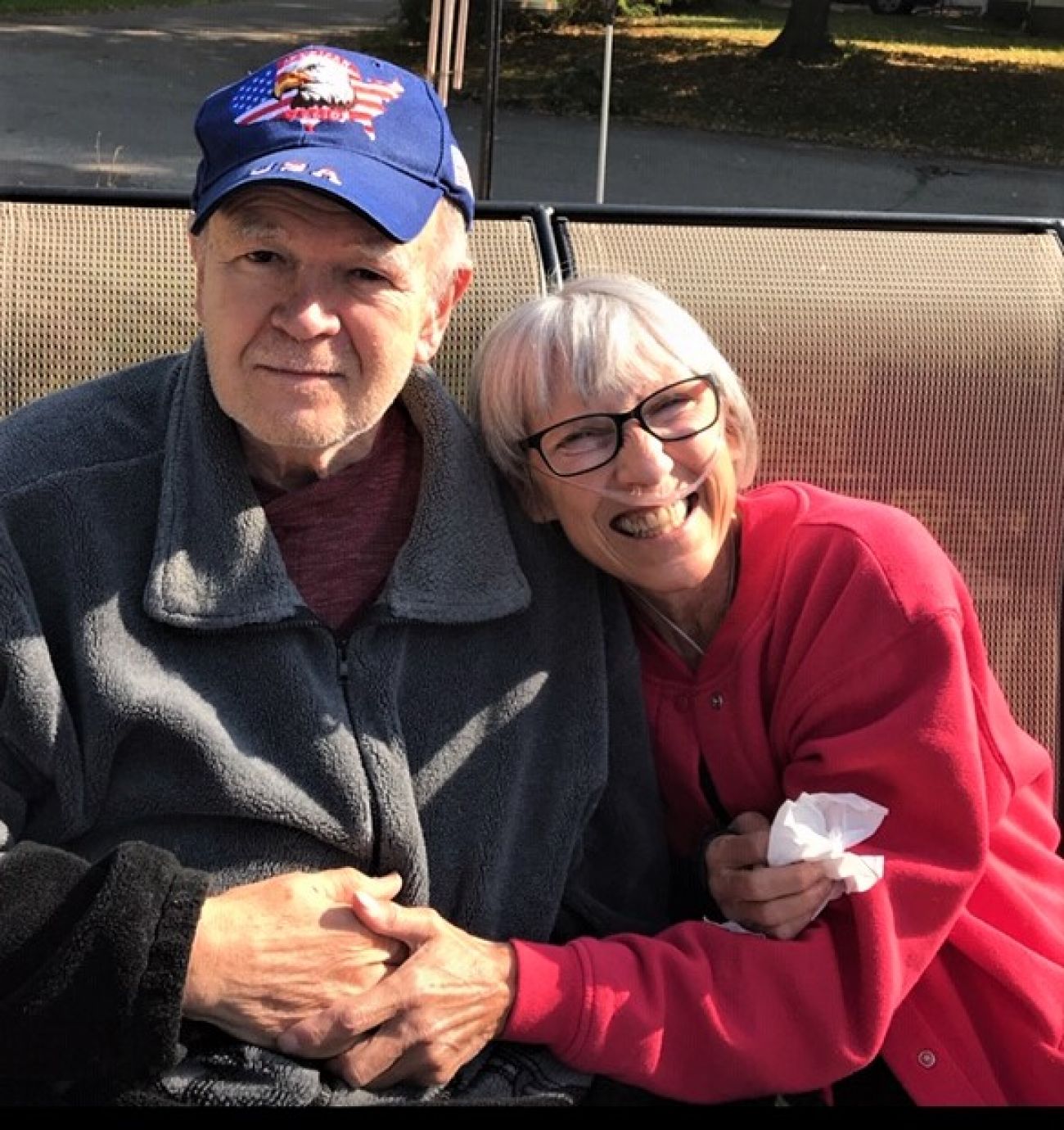 It was on the night of Oct. 29 that staffers said they heard the first cough — more like an odd clearing of the throat.

Dornan was sitting at the kitchen table; her son and assistant manager, Chris, was making dinner at the stove. One of the ladies in the living room cleared her throat. And then again.

When you spend every day with your clients, you know their sounds and habits.

She and her son looked at each other.

“I said, ‘Let’s get them isolated. Isolate now. Nobody’s coming in and out — no therapy, nothing.’”

Tests ultimately confirmed COVID in seven of the nine residents and eight of 10 staff. Dornan said she too “was down” for days with “a hard cough, headache and real bad fatigue.”

Jerry Zeiger was hit hard. It also began with the odd throat-clearing.

The man who had head-butted staff in his deepest confusion had been weakened by a series of mini-strokes. He was losing the ability to swallow. Breathing grew difficult. His oxygen levels dropped.

He was dying, Sue Dornan said, but “COVID hurried the process.”

Which is what brought Melanie to Jerry’s window that Wednesday, Veterans Day.

She stepped out of her car. Dornan — in a smock, mask and face shield — met her and handed Melanie a glass block onto which had been etched the snapshot of the couple in the sun.

Melanie stepped onto the ladder to whisper to Jerry. 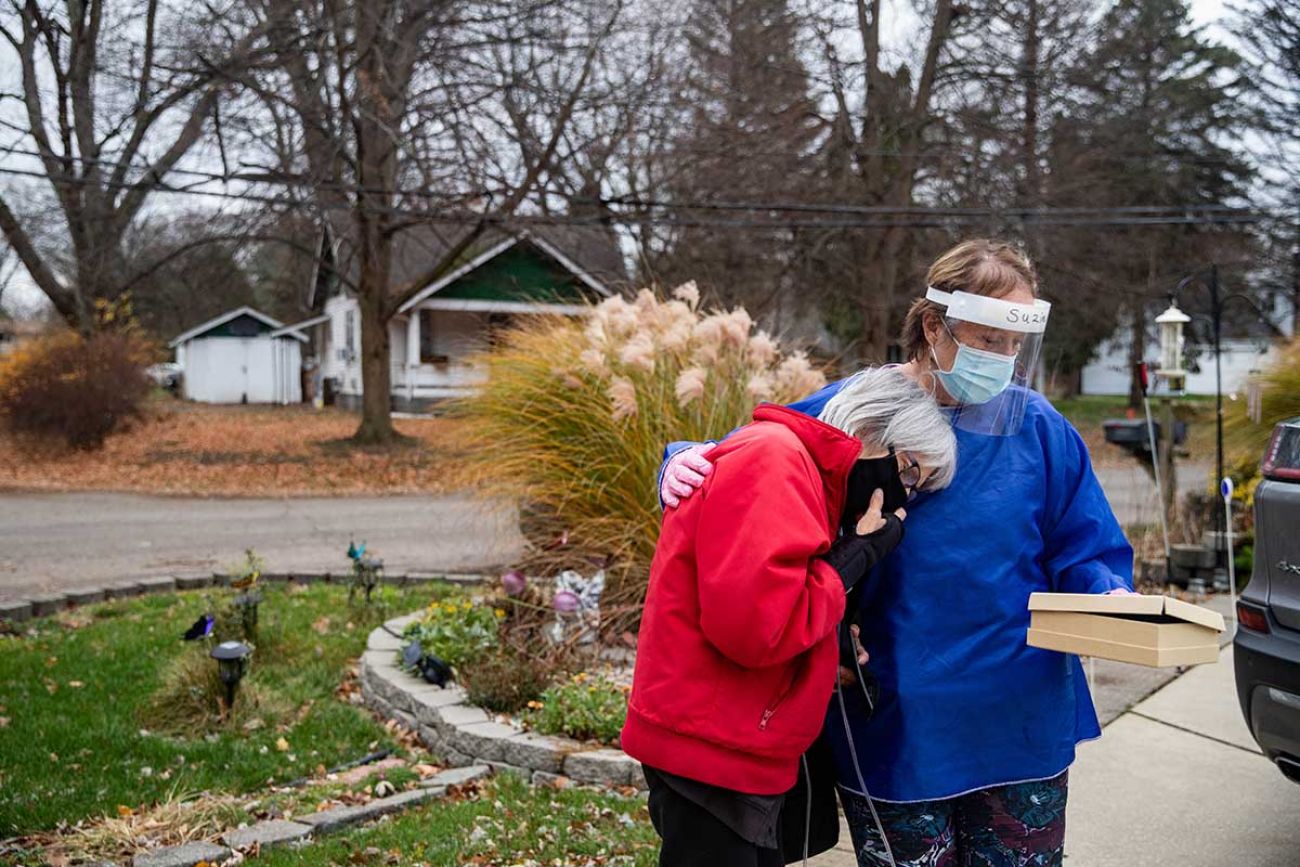 Two days later, Melanie was at the tiny home she purchased in Portage so she could be closer to her husband. It was Friday.

She was just getting ready to drive to see Jerry when the phone rang.

Across the city, Dornan held her phone to Jerry’s ear as his breathing hollowed out. Jazz — his favorite music — played softly in the background.

Through the phone in Sue’s hand, Melanie — sitting in her tidy home office with her Bible open at her desk — told Jerry once more that she loved him.

And then he was gone.

“We kept it out for eight months, but when it hit, it hit nearly everyone,” Dornan would say later of the virus. Two other residents would die after testing positive. “You see the havoc it wreaks.”

In the hours after Jerry’s death, Melanie’s phone rang. A niece stopped by. Melanie searched through neat stacks of paper for documents she wanted for the funeral home, including Jerry’s military record.

And she turned to her faith.

She’s grateful for the last month God gave them to be together. And she believes her decision to stay apart from Jerry was his, as much as her own.

“I could have made the decision to be there (on his final days)” she said. “Sue would have allowed me. But it was me who chose not to.

“When Jerry and I got married, we wrote our own vows and we truly became one… When I make decisions, when I’m contemplating, I am considering his opinion, too.”

Jerry, she says, would not want her to risk getting an infection.

But that doesn’t make the guilt any easier.

In the end, it was as she feared. COVID won. Her husband — “My big marine,” as Melanie called him — died without his hands in hers.