Oakland County registered another 30 deaths overnight, nearly doubling its death toll to 59 since it reported its first fatality from coronavirus on March 20. Nearby, Detroit reported that its death count has hit 50, up from 35 on Sunday.

It is the beginning of “the most challenging week yet” and one in which cases are only expected to rise even more, county executive Dave Coulter said during an afternoon news conference Monday.

“These are our neighbors. These are our family members… COVID-19 is not a respecter of age or race or income or nationality,” Coulter said.

Coulter reiterated the urgency for restocked supplies for hospitals that “will soon be overwhelmed.” Most immediately, he said, hospitals need some 200,000 N95 masks and 230 “critically needed ventilators.”

“We're getting close to a point where our hospitals are going to reach capacity, and we're going to have to be much more creative in what we do with those patients, and how we handle them,” he said.

In announcing the deaths, the county also released more information on its public dashboard about testing, with a county map that highlights areas – broken down by zip code – with the highest numbers of positive test results. Southfield, Oak Park, Lathrup Village, and West Bloomfield and the southeast corner of the county have the highest number — 500 by midday Monday, of positive tests.

But COVID-19 cases are present throughout Oakland, Coulter warned. He and health officer Leigh-Anne Stafford stressed that the map shows only where infected people live rather than where they were infected, he and Stafford said.

“Don't panic if your community has a higher number, and don't let up if it doesn’t,” Coulter said, pleading with residents once again to shelter in place.

“We're going to still see numbers rise and so my fear is that people get dejected, they feel like it's not working, and they want to give up,” he said.

“Social distancing and hygiene and other recommendations are more critical than ever,” he added. 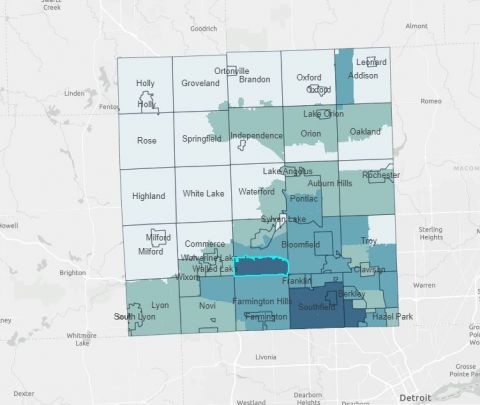 The county continues to struggle to get ahead of positive cases that have surged to more than 1 in 5 of cases throughout the state.

Among deaths, patients statewide have been from 25 to 97 years old, and their average age is 64, according to state data by midday Monday.

In Oakland County, those who died ranged in age from 36 to 92 years old, Stafford said. Most had had underlying conditions, she told Bridge Magazine.

Spokesman Bill Mullan said hospitals have asked the county not to detail where the deaths have occured — a request the county is honoring, for now, he said.

“Where they live and where they died doesn’t tell you the story of underlying conditions or infections ... or the course of the disease,” he said.