Patients in brown recliners line one hallway at Sparrow after the emergency department ran out of stretchers to hold overflow patients until they can get a room with a bed. (Michigan Radio photo by Lester Graham)
October 13, 2021
Kate Wells, Michigan Radio
Michigan Health Watch
Coronavirus Michigan

Just looking at all the patients laying on the stretchers in emergency department hallways makes Tiffani Dusang physically uncomfortable. It’s like she vibrates, a sort of perpetual small bounce on the soles of her practical shoes.

“It’s hard to watch,” said Dusang, the director of emergency and forensic nursing at Sparrow Hospital in Lansing. “I always feel very, very bad when I walk down the hallway, and see that people are in pain, needing to sleep or needing quiet. But they have to be in the hallway, with 10 or 15 people walking by every minute.”

The situation is not just uncomfortable. It’s dangerous. Emergency department visits are up 43 percent in the last year in Michigan. Studies have repeatedly shown ED overcrowding increases the risk a patient will get sicker, or even die. And that was before the current wave of ED patients who, staff say, seem more acutely ill than emergency patients were pre-pandemic.

“People with pneumonia, diabetes, heart conditions...and a lot of high-acuity pediatric patients as well, which I’ve never seen before,” said Kelly Spitz, an RN at Sparrow’s ED. “Before COVID, we would see sick patients, and have our traumas and strokes and heart patients. But the scale of patients we’re seeing now is probably four times as many (acutely) sick people as what we saw before.”

That’s because, the prevailing theory goes, so many people delayed care or just couldn’t access it during the pandemic of the last 18 months.

“We're back to pre-COVID volumes, but we also have the added burden of the COVID patients and the sort of the backlog of patients that have been deferring some of their care over the last year,” said Dr. Brad Uren, an emergency medicine professor at the University of Michigan and past president of the American College of Emergency Physicians.

But now it’s far harder to make room for them.

For hospitals like Sparrow, the inpatient floors and intensive care units are full, at least partly because of COVID patients. So when these acutely sick patients flood the ER, they end up waiting hours, even days, for a bed upstairs to open up.

Every room in Sparrow’s ED is full, Dusang said, walking through the beige-tiled halls. So they brought in the stretchers. But now the stretchers are full, too. So they’ve lined up a row of brown leather reclining chairs in one hall, each one within touching distance of the other, where patients may wait for 8 or more hours. 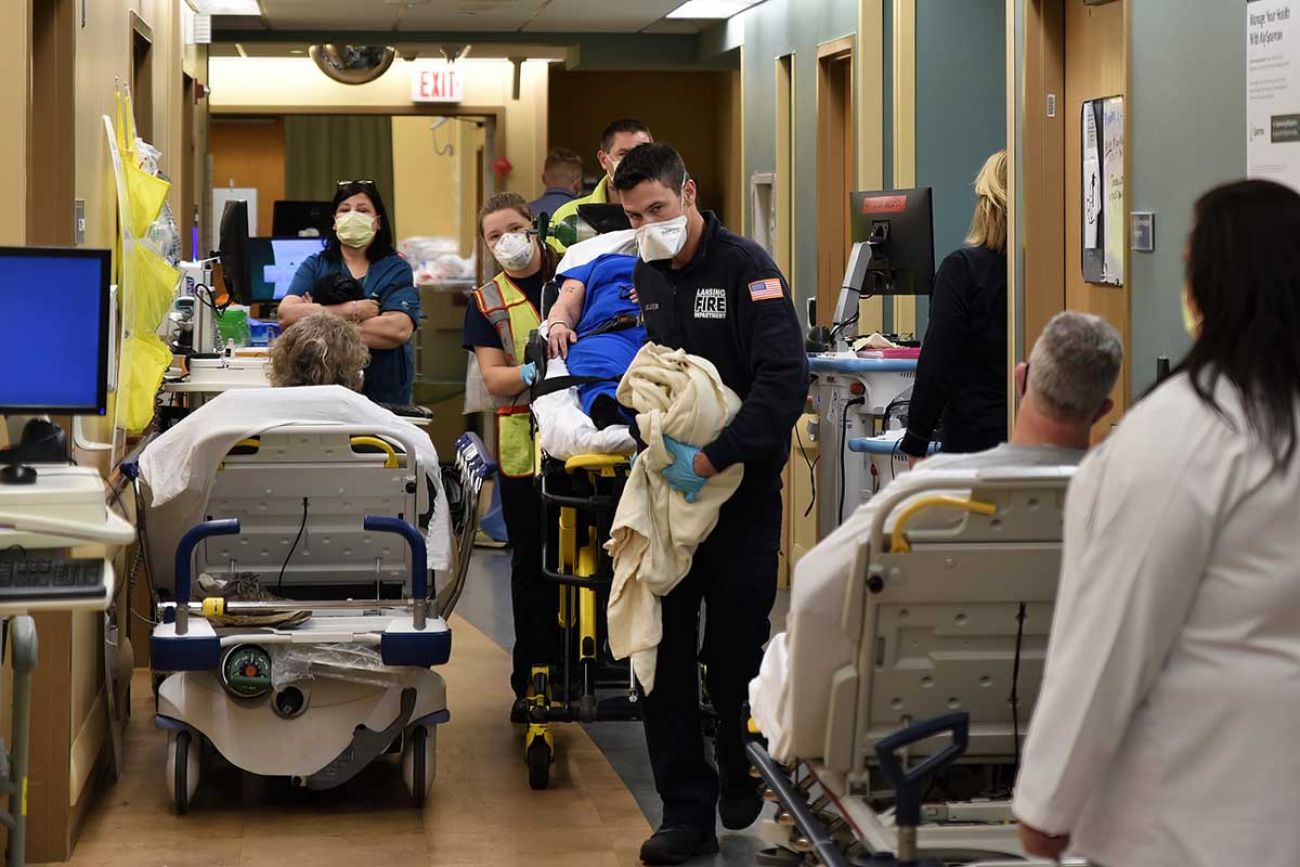 A Lansing ambulance crew weaves a gurney past occupied beds in the hallway in Sparrow’s emergency center. (Michigan Radio photo by Lester Graham)

“Hell, I’ve been here for 12 hours before I was even put up into a room,” he said of a previous trip.

On this day, Diaz has been hooked up to an IV, but says he’s still in pain. To try to sleep, he’s pulled the hood on his sweatshirt tight around his face, hoping to block out the fluorescent lights of the hallway and murmur of nurses and patients next to him.

It’s unlikely Diaz will even get a room, at least today. Nor does it look good for the patient two chairs down from him, Alejos Perrientoz. For the past week, his arm has felt numb, with an intense tingling pain that makes it impossible for him to even hold a coffee cup. Initial tests have ruled out a stroke, he said. One of the nurses just gave him another examination here in the hall, lifting up his shirt to attach a monitor.

“I felt a little uncomfortable,” he said. “But I had no choice. I’m in the hallway. There’s no rooms. We could have done the physical in the parking lot or something, you know?”

On an average day, a steady stream of 70 to 100 ambulances pull into Sparrow’s ED. “It’s the highest I’ve ever seen in my career,” said Dusang, the nursing director, as a baby-faced EMS team rushes someone in on a stretcher.

But not even these patients are guaranteed a room: one nurse is running triage here, screening those who absolutely need a bed, and those who can be put in the waiting area.

“I hate that we even have to make that determination,” Dusang said, looking on. Lately they’ve been pulling out some of the patients who are already in the rooms, because someone more critically ill has arrived. 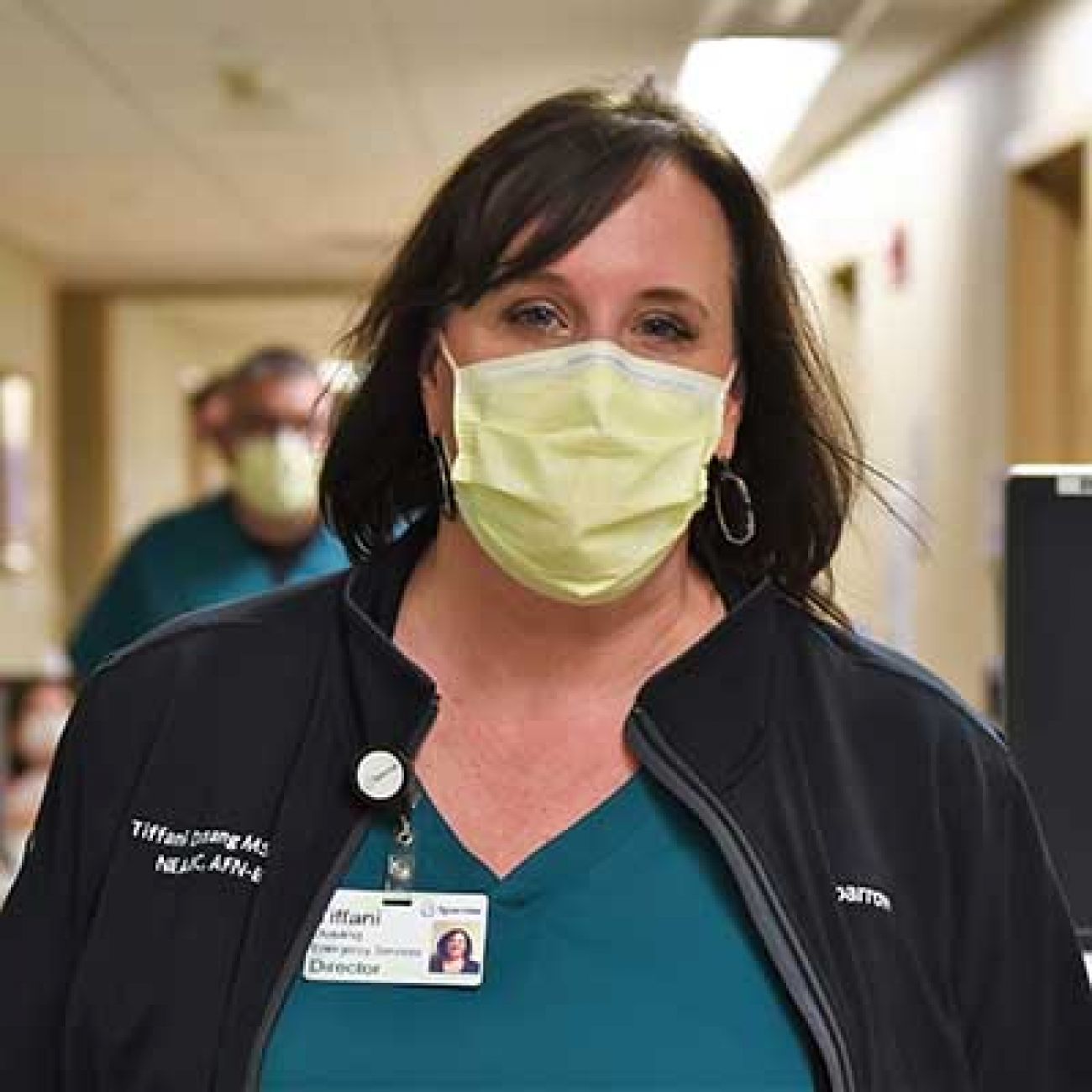 Tiffani Dusang, director of emergency and forensic nursing at Sparrow Hospital in Lansing, said the staff has sometimes had to remove emergency patients from rooms to make way for patients who are even sicker.. (Michigan Radio photo by Lester Graham)

“No one likes to take someone out the privacy of their room and say, ‘We’re going to put you in a hallways because we need to get care to someone else.’”

‘Everybody has a breaking point’

Midway through the afternoon, one nurse breaks down sobbing. Amy Harvey, an RN in the pediatric ED, pulls the nurse into a corner and reminds her to take deep breaths.

“Everybody has a breaking point,” she said afterward. “It just depends on the day and the situation...mine could be in three days. Something comes in that just hits home for some reason, and I need a minute to go take a deep breath.”

But nurses and other hospital workers are burning out. They’re leaving the profession, or taking a gig as a travel nurse somewhere else. Nearly every day, Dusang said, a nurse tells her they drove home crying. And every morning, she checks her email, praying there won’t be another resignation email.

To help, the ED’s brought on some 20 “baby nurses,” as brand new nurses are called. The hospital has waived a one-year nursing experience requirement to work in the ED, so many of these new staff members are fresh out of nursing school. Right away, they’re starting their careers in the deep end, even as they’re still training.

“I need some assistance,” one of the baby nurses whispered breathily, holding up an IV bag. She can’t figure out how to get the top off an IV bag.  “It just pushes in, doesn’t it?”

“You gotta twist it so those line up,” a veteran nurse shows her.

Kelly Spitz has been in the job for 10 years. But lately, she’s thought about leaving, too. “It has crossed my mind several times. And I continue to come back. Because I have a team here. And I love what I do,” she said, her voice breaking.

What’s getting to her is not being able to give these patients the kind of care she wants to.

She thinks a lot about one patient who came in a while ago. His test results revealed terminal cancer. So Spitz spent all day working the phones, hustling case managers, trying to get hospice care set up in the man’s home. She just didn’t want him to have to die here, in the hospital, with only one visitor allowed.

“I felt like I did my job there, because I got him home,” she said. “It’s not always the outcome you want, but you can make a difference. It’s hard to make a difference with so many high-acuity patients all at once, with every single patient.”

By 4 pm, the ED is the busiest it’s been all day. The patients in the halls seem especially vulnerable, silently witnessing the controlled chaos rushing by them. One woman on a stretcher lay sleeping or unconscious, naked from the waist down. Someone put a sheet over her so she’s partially covered, but part of her hips and legs are bare, open sores visible on her calves.

Dusang is in the midst of putting out a new fire: the department is even more short-staffed for the overnight shift than usual. They’ve got 8 inpatients in an overflow ED unit. If they don’t get more help, they’ll have to shut it down.

“Can we get two inpatient nurses?” she asked.

“Already tried,” said Troy Latunski, a nurse and the ED manager. But he’s got a plan: He’ll go home, get a few hours sleep, and come back at 11 and care for the overflow unit. With any luck, he’ll be able to pull a nurse tech down to help him.

Still, one nurse caring for 8 patients isn’t a safe ratio. But what are the alternatives? If they close the overflow unit, those inpatients will have to be moved back into the main ED. That will mean even less space for the patients who come in overnight. You can see Dusang’s face as she mentally calculates, imagining the rush-hour car crashes, the toddler having a 3 a.m. seizure.

“Ok,” she said. “Go home. Get some sleep. Thank you.” She shoots Latunski a grateful smile.

He’s a hero, she said fondly, before moving on to the next crisis.