A Michigan family goes to Canada for insulin. Will a drug import law help?

There are biscuits to finish, a table to set and homework to start for the family’s eight children. As Lockwood turns to a cutting board, she glances at a series of three-digit numbers on her phone — sent from glucose monitors taped to the arms of two of her boys.

On this January afternoon, 12-year-old Brady’s sugar is running low and 8-year-old Cyrus’ is sky high. A third child – 17-year-old Joci – monitors her own sugar levels.

Diagnosed with Type 1 diabetes, the three children rely on precise insulin  measurements. “The margin for error is so minute,” Lockwood said, sliding strawberries into a bowl. “The slightest misdose can kill them.” 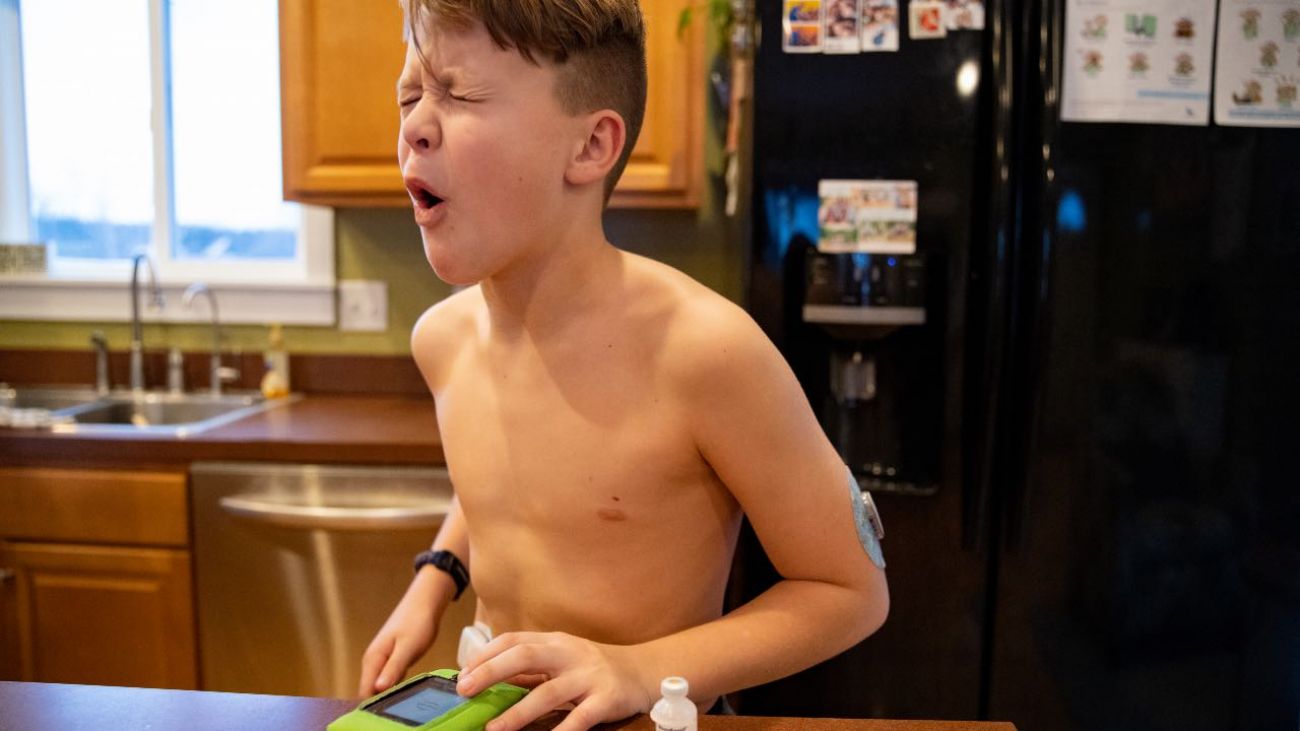 Brady Lockwood, 12, reacts the moment an insulin pump is injected into his bloodstream before dinner. (Bridge photo by Daytona Niles)

The Lockwoods, who live in Gowen north of Grand Rapids, were rattled two years ago when Michigan’s Medicaid changed its formulary, so Novolog insulin was no longer covered. When Rachael tried to fill the prescriptions, the cost had gone from nothing to about $600 for about a month’s supply for each child.

So the Lockwoods joined a stream of Michiganders crossing into Canada to buy drugs at a deep discounts  — just $71 for five Novolog PenFills that cost about $600 in the U.S., she said.

Two bills pending in Lansing aim to put the Lockwoods and others closer to getting deeply discounted Canadian drugs they now get only by driving to Canada or finding Canadian pharmacies willing to refill by mail order, which presents legal as well as logistical challenges.

The bills are drawing pushback on a variety of fronts, most predictably from drugmakers who say they worry about the quality of drugs that have not been approved by the Food and Drug Administration. Critics include some Democrats and others who say the U.S. should focus more on lowering domestic drug prices than on trying to secure discounts from other countries.

But the biggest obstacle may come from Canadians, themselves, who already face drug shortages, which they say would be exacerbated by opening exports to the far larger U.S. market.

“We could give you all of our medicines, and we would suffer, and we would die prematurely,” he told members of the Michigan House Health Policy Committee last month. 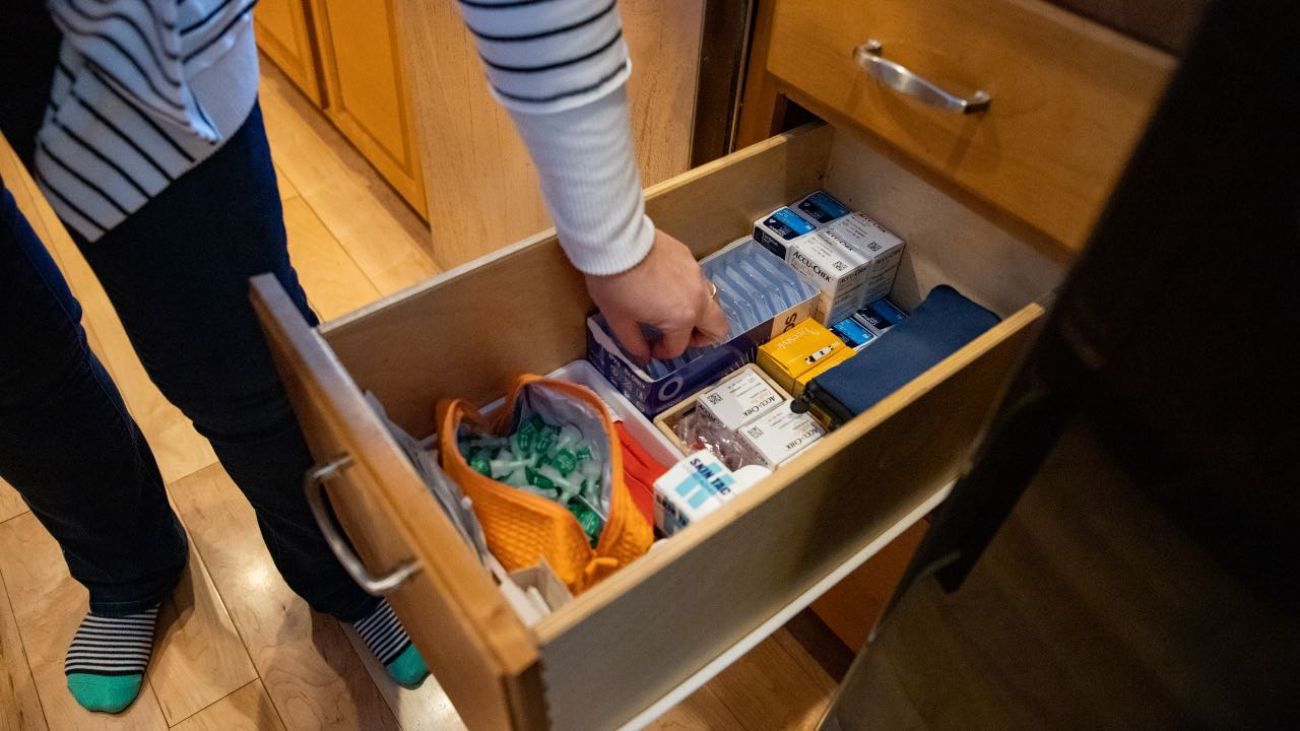 A kitchen drawer helps Jim and Rachael Lockwood, of Gowen, organize insulin for three of their children who have been diagnosed with Type 1 diabetes. (Bridge photo by Daytona Niles)

Michigan’s two-bill proposal, introduced by state representatives Tommy Brann (R-Wyoming) and Steven Johnson (R-Wayland), would establish an importation program under a until-now unused 2003 federal law. That law authorizes the U.S. Department of Health and Human Services to allow pharmacists and wholesalers to import drugs from Canada.

Federal officials put the law back into play in July when they told individual states they could submit plans to import drugs from Canada. The plans must show how states will ensure drugs are imported safely and at a cost saving.

Vermont and Florida were the first to file “concept” paperwork in advance of formal proposals, according to the National Academy for State Health Policy, which has provided model legislation for states. Federal and state oversight offices and federal laws already offer a framework for the safe import of drugs, said Jennifer Reck, who tracks state efforts for the organization.

In Lansing, Brann and Johnson’s legislation would set into motion a Michigan plan.

“We truly live in a global marketplace now, and that's good for consumers,” Johnson told the House Health Policy Committee in December. “But there is one glaring exception here, and that's with prescription drugs.” 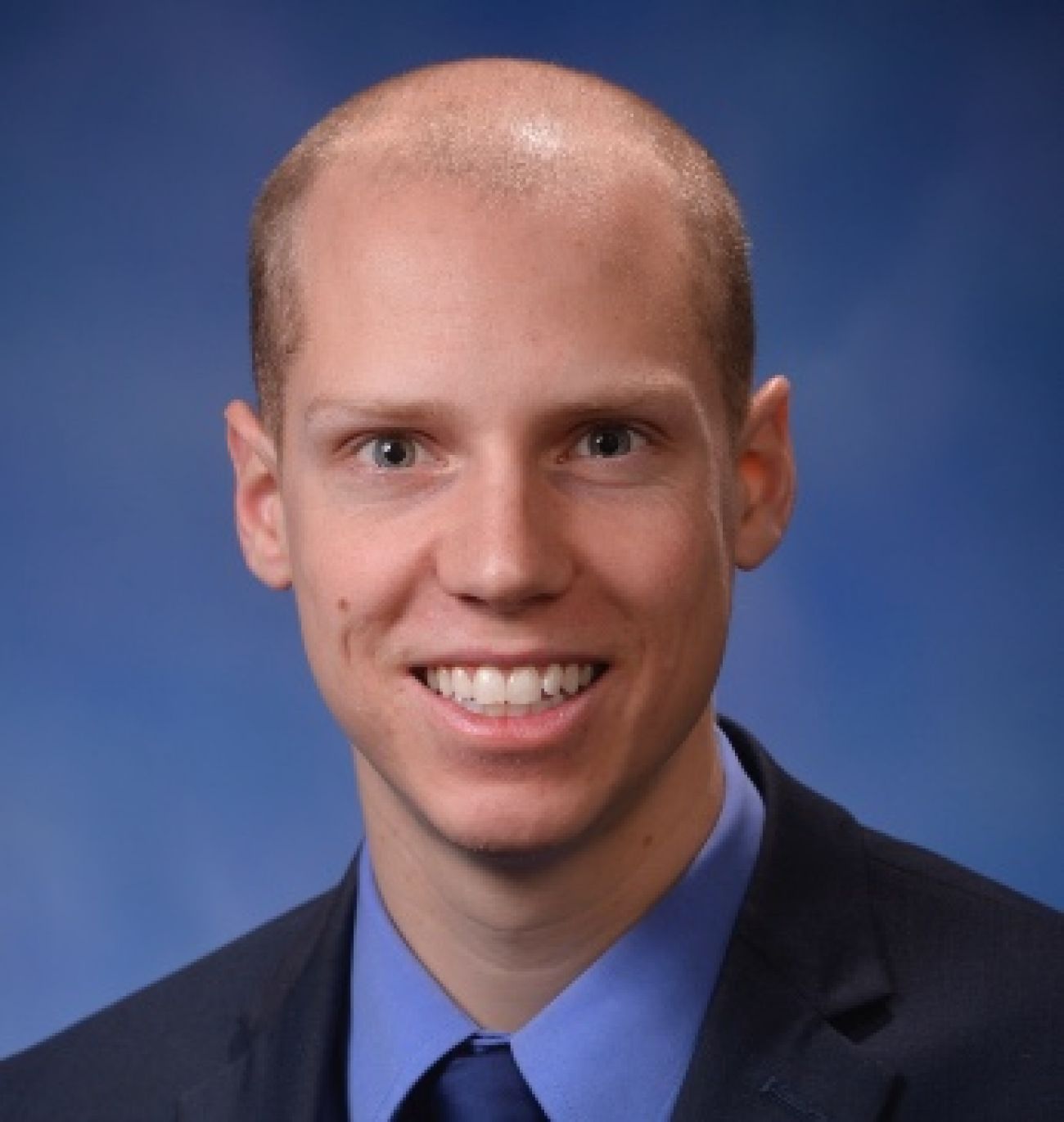 The price of prescription drugs undoubtedly will be a focal point of discussions in Lansing and elsewhere this year, as presidential campaigns swing through the state.

President Trump has promised to bring down prescription drug prices, and  Democrats have long assailed the costs of U.S. medical care and drugs.

For her part, Rachael Lockwood climbed on a bus last July with U.S. Sen. Bernie Sanders, a Democratic candidate for president, as they and others drove to Canada to underscore the cost differences in drug prices across the border.

Nationally, AARP has estimated that 28 percent of U.S. adults 19 to 64 years old skip medications because of the cost. In Michigan, the problem may be more acute; AARP estimates the 32 percent of Michigan adults — nearly 1 in 3 — forgo medications due to cost.

Given the rising number of Americans crossing into Canada for cheaper drugs, a state law that simplifies that process would seem to make sense. Except, experts say, it isn’t quite that simple.

Adams, of the Canadian patient coalition, notes that his country is known for its generosity.

“If it were within our wherewithal to share our prescription drug supply with you, we would certainly do so,” he said.

But “Canadians are not responsible for U.S. drug prices. Your drug prices need a Made-in-America solution.” 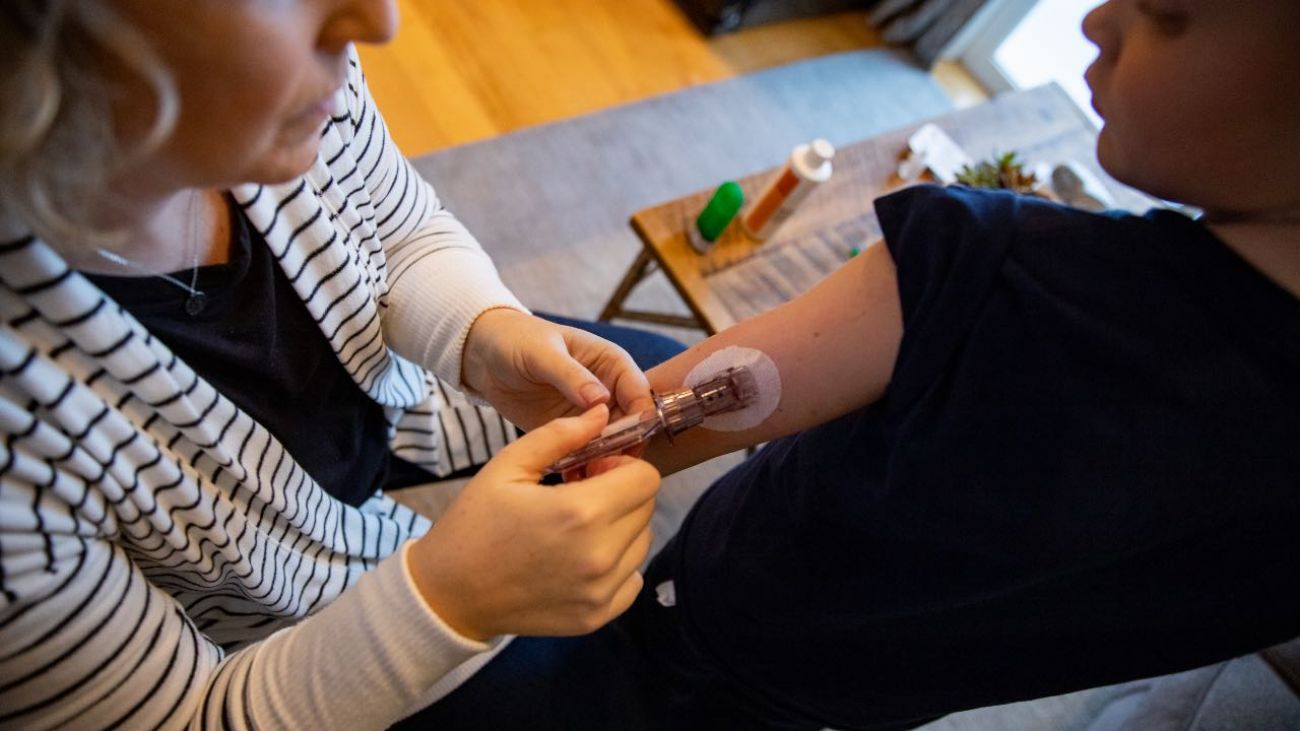 Rachael Lockwood places a new glucose monitor in the arm of her 8-year-old son, Cyrus, who has been diagnosed with Type 1 diabetes, at their home in Gowen. (Bridge photo by Daytona Niles)

Angelique Berg, CEO of the nonprofit Hypertension Canada, made a similar point. She noted that untreated hypertension kills without symptoms, attacking organs over time, leading to strokes and heart attack, she said.

Five million Canadians take medications to keep their hypertension in check, she told Bridge Magazine. In the U.S., the Centers for Disease Control and Prevention estimates 75 million Americans suffer from the condition.

“You can import all of our drugs and it will not help you,” Berg said. But large exports to the U.S. would bring Canadians “back to times of shag carpets and orange lamps when people would just drop dead of heart attacks.”

Research studies in the U.S. suggest that drug importation programs oversimplify the problem and would lead to few, if any, savings for  consumers.

A 2004 report by the Congressional Budget Office concluded that U.S. consumers would see “at most a modest reduction” in costs if the U.S. were to allow drug imports from other countries. Further, consumers’ savings would be “negligible” if the U.S. were to import from Canada only, according to the report’s authors.

They argued that drug distribution and sales fall outside the normal rules of a free-market economy because of strict patent rules and drugmakers’ ability to redistribute their product globally. For example, drugmakers can choke imports in the U.S. by tying low drug prices in other countries to promises by those countries that they won’t export to the U.S., they wrote.

In December, Rep. Lori Stone (D-Warren) questioned Johnson and Brann about the wisdom of turning to Canada rather than tackling drug prices within U.S. borders.

“We want what they have, but we’re not willing to set up health care systems that do what they do. I’m concerned we’re looking to another country to solve [our] problem,” she said.

Rachael Lockwood said she shares those concerns. This isn’t about shortages in the U.S., she said. It’s about consumers being priced out of reach.

Lockwood recalled her shock when presented with the $600 charge for Novolog back in 2018. “Even the pharmacist thought it was a mistake,” she said.

She acknowledges there were other insulin brands that Medicaid would cover. But Novolog offered the most precise dosing — a critical benefit with children whose blood sugar is kept in check with tiny amounts of insulin, she said.

Lockwood said she doesn’t know if government-sanctioned, large-scale importation like that suggested in Brann’s and Johnson’s bills is the answer. But, she said, something needs to give.

“We live in the so-called greatest country on the earth, but people still have to travel outside the U.S. just to get something that’s readily available at their local pharmacy.”

Even those with insurance that cover prescription costs are facing sticker shock as plans shift to higher-deductibles, said Brett Gingrich, pharmacy director of Grand Rapids-based Cherry Health, the state’s largest federally-qualified health center (FQHC), a clinic subsidized to offer low- and no-cost care to the state’s under- and uninsured.

That means insurance kicks in only after the consumer first exhausts thousands of dollars in out-of-pocket costs, he said. 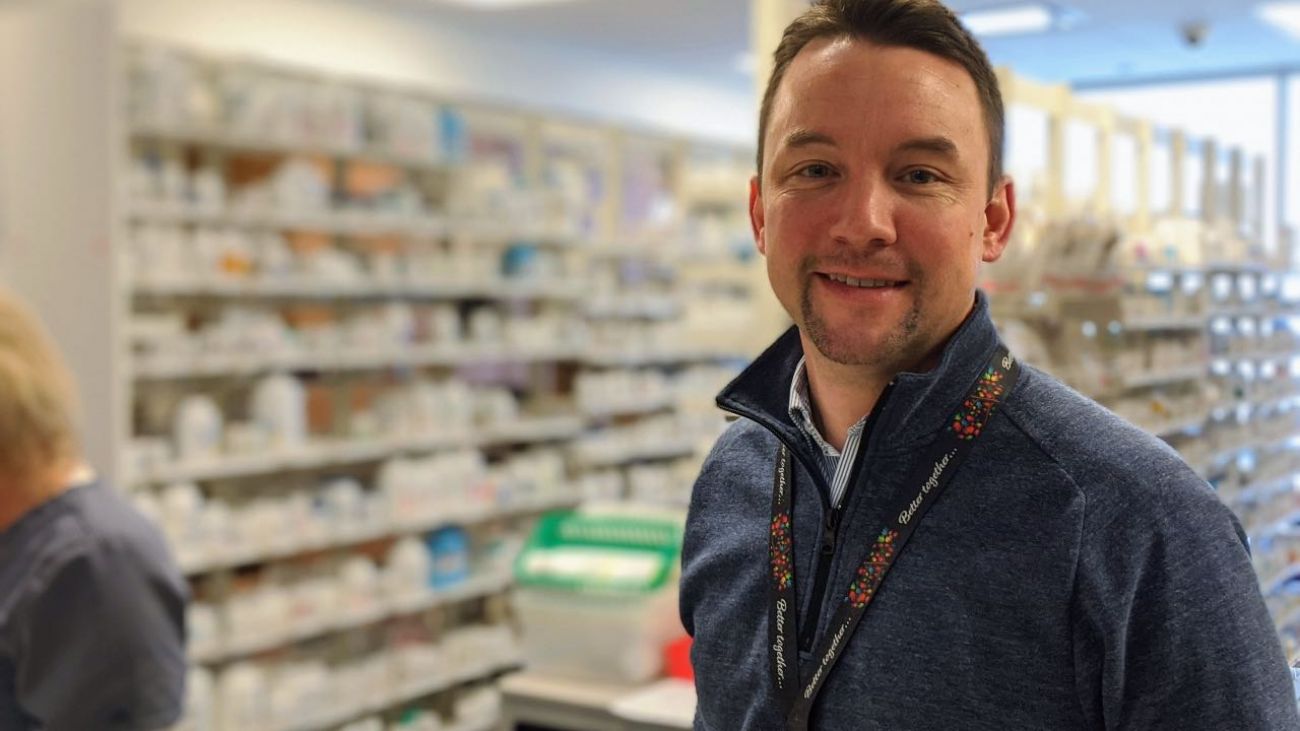 In his tiny, windowless office at the Grand Rapids center, Gingrich’s desk holds neat stacks of papers that include printouts of drug prices as well as news reports on consumers’ struggles to pay them. The staff at the Cherry Health pharmacies, he said, tell him it’s not unusual for patients to cry when they hear the cost of their meds, even at the discounted prices that Cherry Health offers through financial assistance as an FQHC.

“The more you look at it,” Gingrich said, “the more frustrated you get.”

U.S. Rep. Elissa Slotkin, a Holly Democrat, noted that her own father, Curt, traveled to Canada to save money on heart medicine. She co-sponsored the Safe and Affordable Drugs from Canada Act to help individuals more easily access drugs from Canada. Such efforts can help hold prices for some consumers temporarily. But she said looking to other countries is a “Band-Aid approach” to a problem that needs a long-term solution. 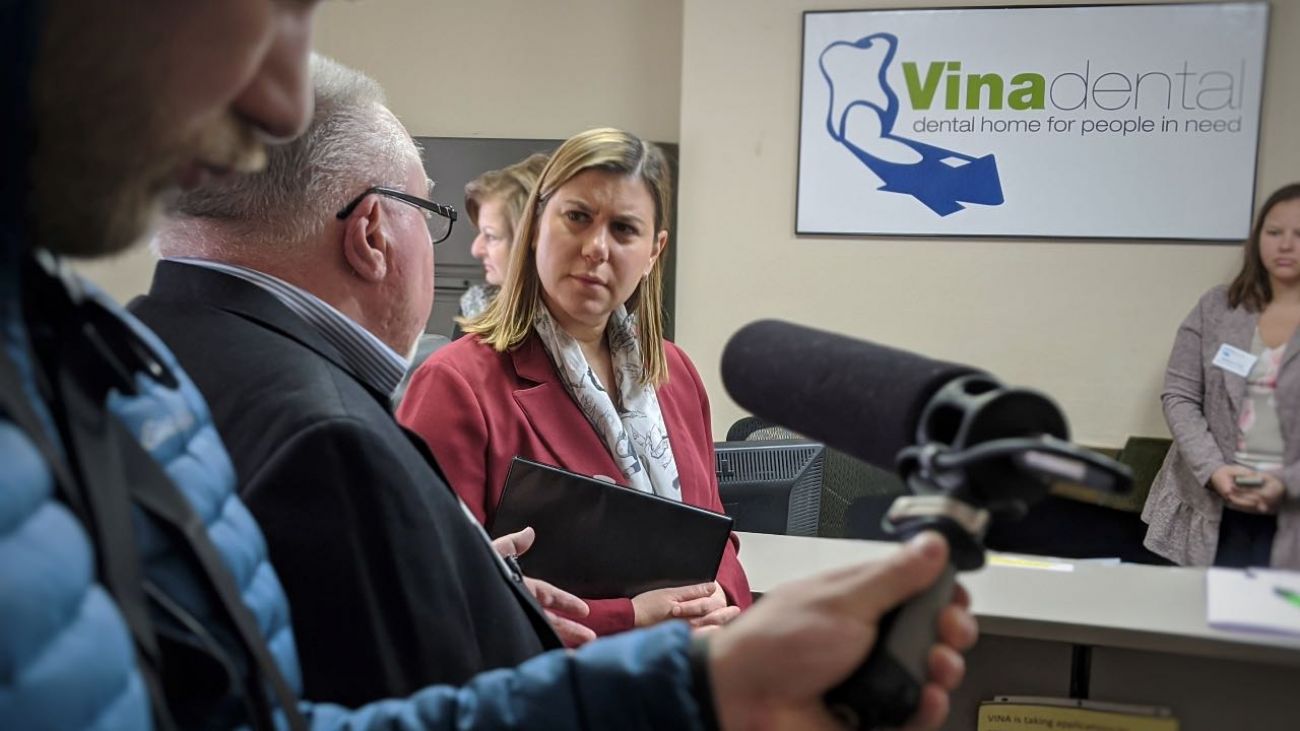 U.S. Rep. Elissa Slotkin, (D-Holly), has been meeting with patients and providers in Ingham, Livingston and Oakland counties to discuss the costs of medical care and prescription drugs prices. On Thursday, she met with leaders of VINA Community Dental Center in Brighton. (Bridge photo by Robin Erb)

Slotkin also was among the co-sponsors of the Lower Drug Costs Now Act, which would allow the U.S. Centers for Medicare and Medicaid Services (CMS) to negotiate the price of up to 250 of the most expensive drugs each year, specifically those with no generic alternatives.

Under the proposal, which passed the House of Representatives but stalled in front of an unwelcoming Senate, drug costs can not exceed 120 percent of the average price of the same drugs in Australia, Canada, France, Germany, Japan and the United Kingdom. If such information is not available, the measure would cap drug costs at 85 percent of the average U.S. manufacturer price.  These new negotiated prices would be used in the private market and in Medicaid as well. The bill also would specifically require the federal government to negotiate the price of insulin.

That plan, too, may not solve the problem.

The Congressional Budget Office suggested that the plan will lower prices for some drugs in the short term, but eventually shift costs to other drugs in the U.S. and other countries. Plus, smaller profits for drug makers over the long-term could stifle research and development which, in turn, could mean fewer new drugs on the market in years to come.

But Brann and Johnson take the position that President Trump’s effort to import Canadian drugs is poised to succeed in a free-market system.

“Trade is mutually beneficial,” Johnson told Bridge. “Opening up the American prescription drugs market to their manufacturers —  (Canada) would want to shut that off? They would want to ignore the greatest economy in the world?

“I don't buy that for a second. When those markets start opening up, they’re going to want to play.” 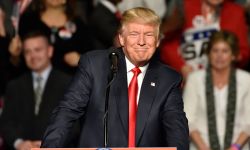 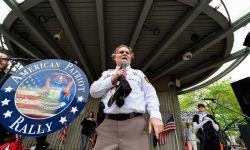