Thousands of Michigan’s lowest-paid hospital workers received pay increases this month when two of the state’s largest hospital systems set a new $15 per hour minimum wage, a nod to increased competition for entry-level workers as the state faces a resurgence in COVID-19 and hospitalizations.

The move “is a strategy to become more competitive,” said Brian Peters, CEO of the Michigan Health & Hospital Association, an industry group.

The announcements — by Henry Ford Health System and Trinity Health — followed months during the COVID-19 pandemic when the virus “shined a very bright light” on inequities facing workers like janitors, food service workers and security guards, Peters said. “All of those things that are critically important to the functionality of a hospital.”

At Detroit-based Henry Ford, 3,000 of its 33,000 workers — including nurse assistants and health screeners who work directly with patients — received a pay boost Oct. 11. Among them were workers who had been earning $11 per hour, or a full-time weekly rate of $440. The raise gives them an extra $160 per week.

“There is a strong association between financial health and security and overall health, a reality that has been driven home over the last eight months for our team members who are on the front lines of the fight against COVID-19,” CEO Wright Lassiter said in a statement.

On Monday, Trinity Health raised its minimum wage to $15 per hour for an estimated 2,100 full- and part-time workers at Mercy Health hospitals in West Michigan and the St. Joseph Mercy Health System in southeast Michigan.

The increase offers “a livable wage to our employees (and it) is closely aligned to our mission and values,” Ane McNeil, chief human resources officer for Trinity Health Michigan’s hospitals, told Bridge Michigan.

“We want our employees to feel appreciated and respected,” she said. 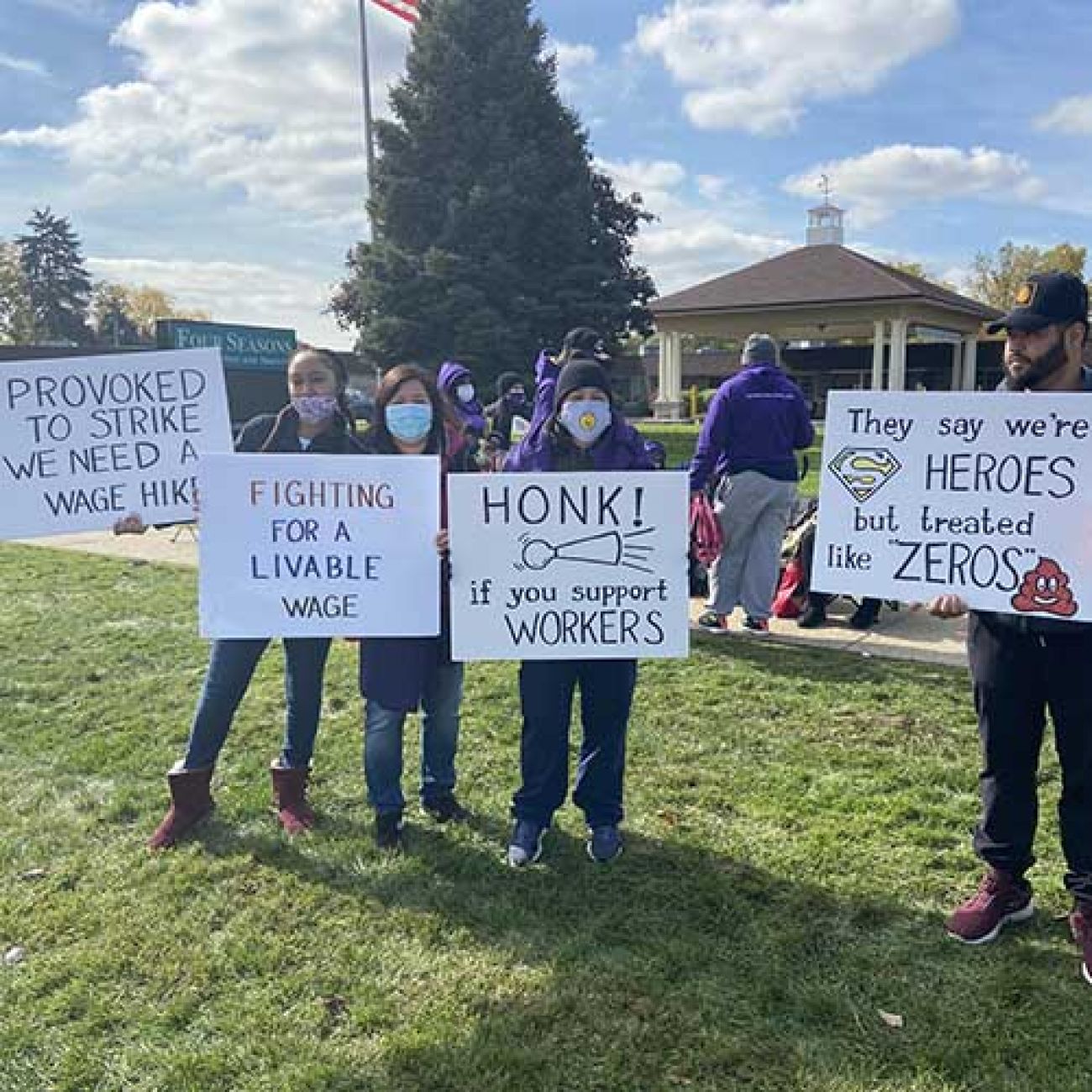 Some health workers have said that appreciation appeared to be in short supply as COVID tore through southeast Michigan last spring, overwhelming hospitals, killing thousands in ICUs and nursing homes, and grinding down staff even as signs dotted yards thanking “healthcare heroes.”

During the height of the spring surge, as some hospital and nursing home staff were infected with COVID, others walked off the jobs worried about their own safety against the virus, Melissa Samuel, president and CEO of the Health Care Association of Michigan, told Bridge Michigan earlier this year.

According to a report last week by PHI, a national advocacy and research group for direct care workers: “No single recent event has impacted the direct care workforce and upended the long-term care sector more than COVID-19.”

PHI described a typical direct care worker, many who work in nursing homes and similar settings, as “a woman, most likely a woman of color, and increasingly an immigrant.”

Earning poverty-level wages, “she is deemed ‘essential’ and ‘heroic’” during COVID, “yet denied basic job supports and protections,” the PHI report said. “Faced with so many employment challenges, she leaves her job and the sector, likely within the first 90 days of employment.”

“I became personally mentally drained,” said Carolyn Cole, 48, a longtime certified nurse assistant at Four Seasons, a nursing home in Westland. “It was watching coworkers getting sick, watching our residents get sick.”

On Monday — the same day as Trinity’s announcement — Cole walked the sidewalk in front of the nursing home to strike with fellow union members of the SEIU Healthcare Michigan over pay levels and working conditions.

Direct care workers — nursing assistants and home care providers, for example — have long complained of low pay. Their median hourly wage was $12.95 in Michigan last year, according to the “Would You Stay?” report by PHI.

Union members had been without a contract at more than a dozen nursing homes, some for more than a year, said Kevin Lignell, spokesman for SEIU, which this summer demanded a $15 minimum hourly wage for all service workers and $18 an hour for nurses’ aides, an end to mandatory overtime and improved health benefits and paid sick leave.

The day after Cole and colleagues hit the sidewalk, they settled the contract with Four Seasons, the union said. Management at Four Seasons did not return Bridge calls for comment.

Four Seasons staff will receive an average increase of $2.66 an hour or over 3 years. That means, certified nursing assistants, for example will average over $17.50 per hour by the end of the contract, Lignell said. Tentative agreements were also reached with each of the other 13 homes covered by the union, though details won’t be released until they are ratified, Lignell said. 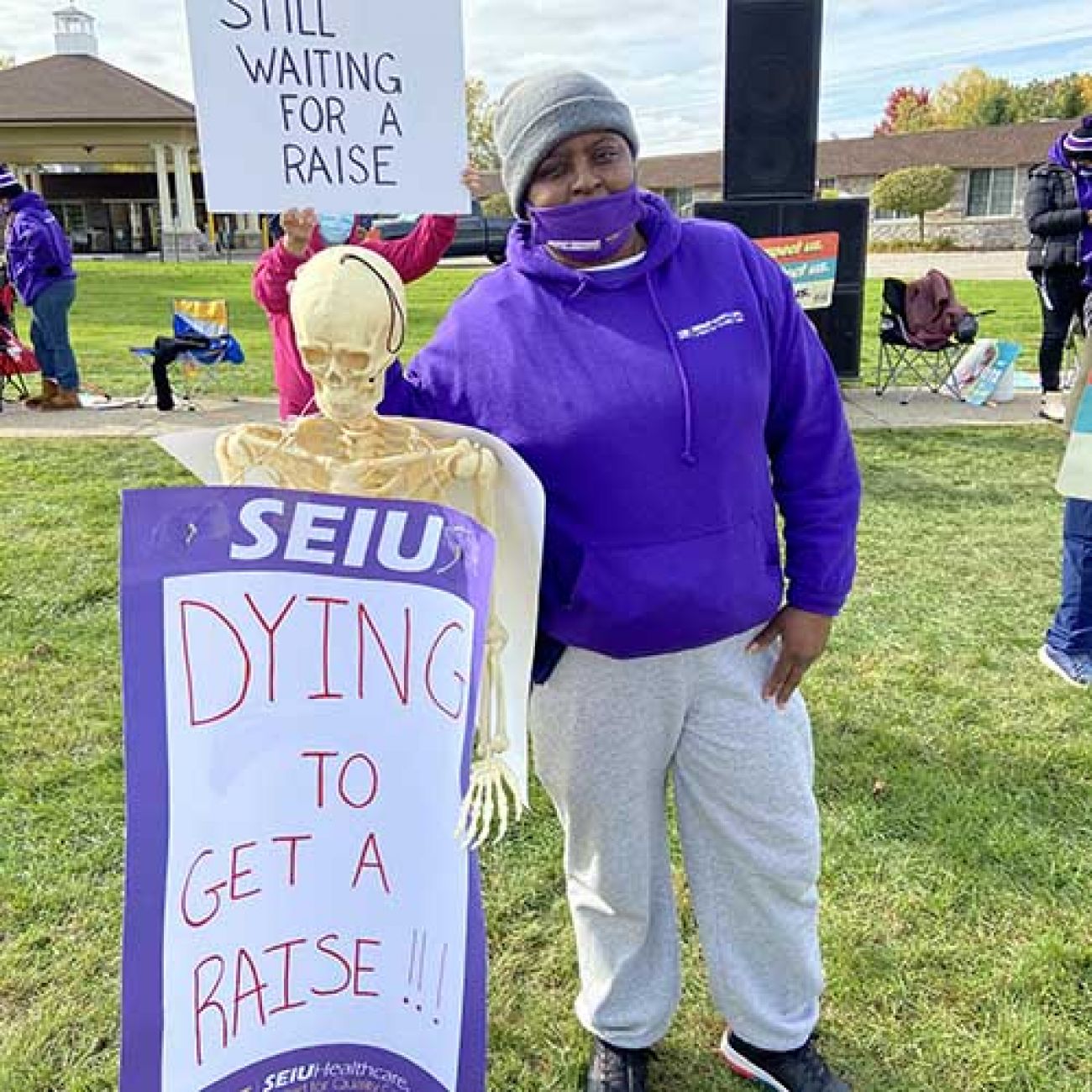 The raises come following volatile disruptions in employment at Michigan’s hospitals and health care systems, which laid-off or furloughed thousands of staff in the spring as non-emergency procedures were canceled and hospital budgets collectively bled an estimated $3.2 billion. At the same time, providers were forced to bring in extra nurses who earned hazard pay for working on COVID units, Peters said. This, as at least two major Michigan nonprofit hospital systems, Henry Ford and Beaumont Health, paid bonuses to executives.

Now, hospitals must “double down” on hiring for lower-wage jobs, as they face competition from other sectors seeking workers during the pandemic, including personal grocery shoppers, delivery personnel, and others, said Chas Roades, cofounder and CEO of Gist Healthcare, a Washington-based advisory firm that works with health systems.

“The hiring market has become pretty difficult at the entry level," he said. “Amazon has been hiring like crazy. Walmart is hiring, and a lot of big-box retailers are hiring.”

“And as the world of COVID goes on, people are wondering, ‘Is it even safe for me to work in health care?’”

Additionally, the existing workforce in health care is exhausted and transitioning to those other fields, Roades said.

Roades said something else is at play: a renewed interest this year in addressing social inequities, including low pay among people of color and women, groups that are often overrepresented in these jobs.

The COVID surge highlighted that many low- and mid-range hospital workers were carrying out some of the most essential, high-risk tasks — cleaning rooms and laundry for patients with COVID, or delivering their meals.

“A lot of the people at the bottom end of the pay scale in health care are minority workers and I think there’s a concerted effort among [hospitals] to make sure that they’re providing fair and equitable pay to them,” Roades said.

Efforts to factor cost of living into wages have resulted in efforts across the U.S. to replace minimum wages with a so-called living wage that business groups and other critics say could be unsustainable for some businesses, resulting in job losses. Michigan’s hourly living wage for a single adult with no children is estimated at $11.35 per hour. For one adult supporting two children above the poverty level, the rate would be $29.31.

Financial struggles are visible among low-wage workers in the healthcare industry, Peters said. The Michigan Hospital Association is active with the Michigan Harvest Gathering to raise money for emergency food supplies  in part because of its connection to helping industry workers.

“Even those that work in hospitals are not immune from food insecurity,” Peters said. “We have hospital workers in some instances who don’t necessarily know where their food is going to come from for their family dinner table tomorrow. Some of our health care leaders are very cognizant of that and [want] to make sure they have a living wage that they are able to alleviate that concern as much as possible.”

That might surprise many in Michigan, Peters said, given the sector’s reputation for its high-quality jobs and benefits. And it’s not new, though the pandemic accentuated it.

“We really have to challenge ourselves why death rates from COVID were greater in one community than another and among one demographic than another,” Peters said.

“In health care, we have to own our part in that solution.”

The raises will cost the medical systems millions. Henry Ford estimates it will add about $6 million per year to the payroll.

It remains unclear whether any other Michigan hospital systems plan a similar move.

Peters said that because his industry is among the largest employers in the state – with an estimated 234,000 workers – raises to $15 per hour could spread across more systems and to other sectors.

Spectrum Health, based in Grand Rapids, said it recently boosted pay by anywhere from 50 cents to $2.25 an hour for thousands of lower-level jobs, including environmental services, nutrition services, medical assistants and nurse techs. Those entry-level positions average $15 an hour. However, Spectrum, which operates 15 hospitals, provided few other details.

Detroit Medical Center, which faced staffing turmoil during the height of the pandemic, did not respond to a request for information about its minimum wage.

Minimum wage for nutrition and environmental services jobs is $12 an hour at Beaumont Health, the state’s largest hospital system. Mark Geary, a spokesperson, said more than 85 percent of the system’s employees are paid more than $15 an hour.

Aaron Gillingham, Beaumont’s chief human resource officer, said the system is “in the process of reviewing compensation” for jobs at a variety of pay levels, but he added, “we will take a more thoughtful approach to this rather than just reacting to what others are doing.” 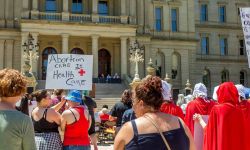