A 6-year-old Michigan child has died of respiratory syncytial virus (RSV), a virus that has been filling doctors’ offices and emergency rooms in recent weeks, along with other respiratory viruses. It is the first publicly confirmed RSV child death in the state this season.

The mounting cases have pushed pediatric care units in Michigan and across the country to capacity.

Respiratory syncytial virus has torn through the country’s infants and young children. Most at risk are premature infants and children with chronic lung disease, congenital heart disease, neuromuscular disorders or weakened immune systems

Doctors said they’ve also seen a return of rhinovirus and adenovirus, which for adults usually cause a common cold, but can be more serious for young children.

In previous years, hospitals were able to temporarily expand pediatric intensive care units when they reached capacity. But staffing shortages, exacerbated over two years by the stress and burnout of COVID, have hampered the ability to make more beds available, said Denenberg, who also is chairman of the Council on Children’s Health for the Michigan Health & Hospital Association, or MHA.

“There are some ICU beds available, but they just can’t be staffed. Physically, we probably have some more capacity. We just can't do anything with it right now,” he said.

Michigan is one of 12 states that report to a national RSV surveillance program, RSV-NET, run by the CDC. As of Oct. 22, Michigan had the third highest rate of residents hospitalized with confirmed RSV (2.8 hospitalizations for every 100,000 residents), behind Connecticut and New York.

RSV is most well-known for its impact on the very young children, but it can also severely sicken older patients. A Saginaw doctor told Bridge Michigan last week she had seen her first ever adult cases this year, admitting one of the adults to the hospital with RSV.

Also on Wednesday, the Oakland County health division took the unusual step of warning residents with cold symptoms to limit their interaction with children, especially those who are at high risk for severe RSV disease, including  premature infants, children 2 years old and younger who have chronic lung or heart conditions, and children with weakened immune systems.

Hospitals have been so strained by an unusually high pediatric patient load that the hospital group is renewing a plea that it offered during surges in COVID hospitalizations: People with mild symptoms should avoid ERs and instead visit family doctors, urgent care centers and other medical facilities.

Those with difficulty breathing or suffering from dehydration should seek emergency help immediately at hospitals, Karasinski said in an email to Bridge Michigan.

RSV is spread when an infected person coughs or sneezes and the virus droplets reach another person's eyes, nose, or mouth, and from direct contact with the virus from a surface such as a doorknob or from kissing the face of a child with RSV.

People infected with RSV are usually contagious for three to eight days, contributing to the virus’ spread a day or two before they start showing signs of illness, according to the CDC.

For now at least, there’s no vaccine against RSV, though the U.S. Food and Drug Administration is expected to review four potential vaccines in the coming year.

One drug, palivizumab, known also as Synagis, can help prevent severe RSV illness, but it’s limited to infants and children who are at high risk for severe disease.

Driving the unusually early RSV season this year (as well as a spike last summer) are infants born during the pandemic.

As COVID bore down on Michigan in 2020 and 2021, pregnant mothers masked and took extra precautions against COVID. In doing so, they also avoided other respiratory viruses which likely would have caused little more than a common cold in the pregnant mother, but would have helped confer critical immunity to developing babies, Faust said. 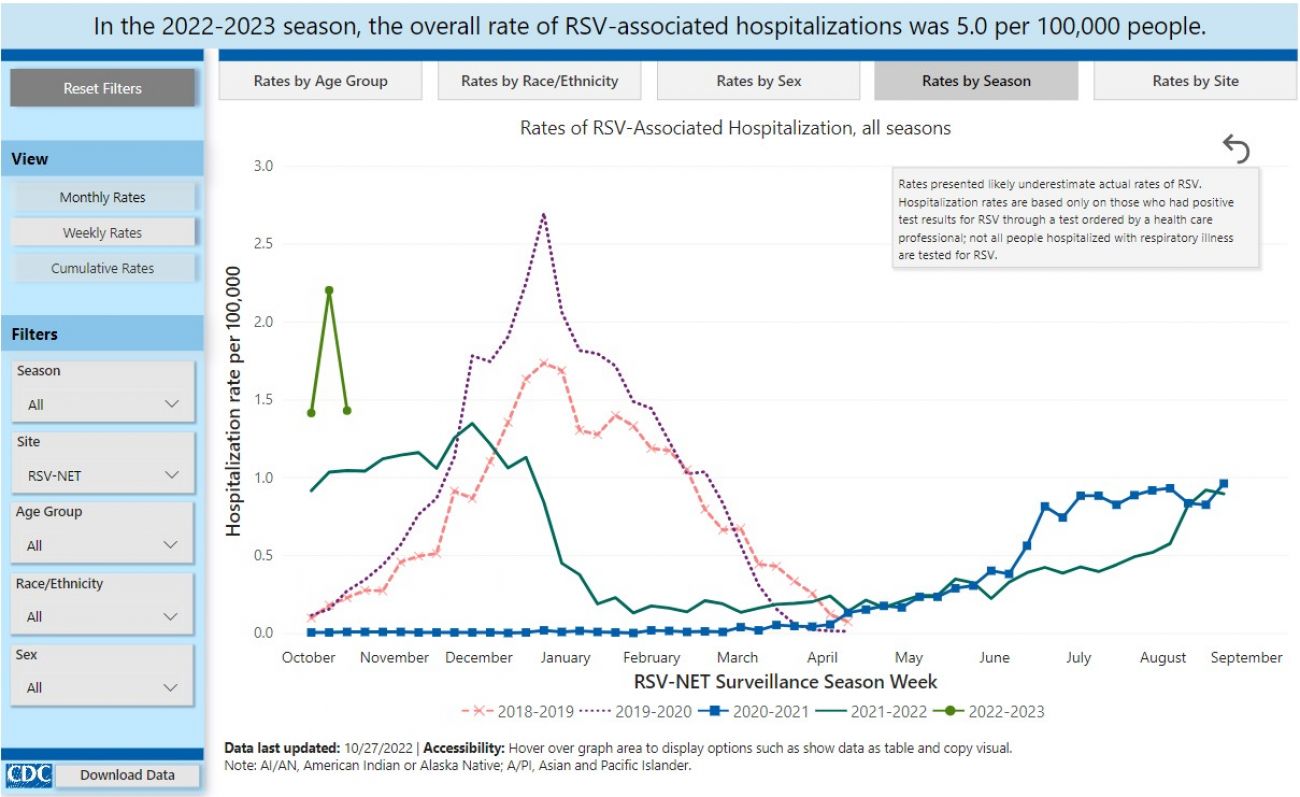 RSV normally appears in December and January, but babies born during the pandemic may be especially vulnerable, spiking cases early this year, experts said. (U.S. Centers for Disease Control and Prevention)

“Most adults — when they get RSV  — they're either asymptomatic or they have cold-like symptoms. It's not that big of a deal,” Faust said.

“But for two years, pregnant women were masking and distancing and washing their hands frequently and staying away from anybody who was ill. They were being vigilant because they were making a baby,” he said. “So for two years those newborns were not benefiting from the passive immunity, the immunity that moms pass on through the placenta.”

Additionally, the viruses are riding a “bounceback” as Michiganders return to pre-pandemic routines, Faust said.

“Everybody's back in the workplace. they're back in the schools and universities they're not masking and distancing. They’re not worried about hand hygiene. They're going back to work or going to school while they're sick,” he said.

Doctors also worry about a severe flu season elsewhere in the United States that likely is moving toward Michigan.

RSV symptoms usually appear four to six days after infection. Symptoms can appear in stages, rather than all at once, according to the CDC.

Call a health provider immediately if a child is having difficulty breathing, not drinking enough fluids, or if symptoms worsen.

In very young infants, irritability, decreased activity, and breathing difficulties may be the only symptoms of RSV.