Michigan may be past coronavirus peak, but cases grow outstate

Michigan Health Watch
Michigan may be past coronavirus peak, but cases grow outstate

On Saturday, Michigan recorded 768 confirmed coronavirus cases, further indication that the state’ curve is flattening from a peak that two weeks ago saw 1,600 sickened every day.

But much of the decline is in metro Detroit while other parts of the state are just now hitting their peaks, an analysis of county-level data shows.

The statewide decline has legislators calling on Gov. Gretchen Whitmer to relax stay-home restrictions that aim to slow the spread of infections but have throttled the economy.

But the decline in rates masks increases in places like southwest Michigan and west Michigan, which saw their highest numbers at the end of last week.

Public officials there have been well aware that infections are increasing. Gillian Conrad, communications manager for the Berrien County Health Department, said the region is two weeks behind metro Detroit.

Cases in Berrien County have ticked up markedly in the past week, and in Calhoun and Kalamazoo counties.

“This was not unexpected,” Conrad said. And the delay, she said, was used by public health officials and hospitals to plan for the current increase.

There were only four cases in the nine-county region —  used by the state to marshal emergency preparedness assets — on March 22. At the same time, Wayne, Oakland, Macomb and Washtenaw counties have over 200 cases.

Conrad said officials in west Michigan have used the time to secure the necessary medical equipment and engaged local leaders, formal and informal, to work on ensuring the message on “social distancing” was embraced.

Other areas of the state are also experiencing sustained levels of infections, including the region that includes Flint’s Genesee County, the hardest-hit county outside of metro Detroit. That region stretches from the Thumb region, around Saginaw Bay and up to northeastern Michigan.

The region has seen cases rise and fall but have failed to decline for a sustained period. The same goes for Region 1, which stretches from the Ohio border in south-central Michigan, through and north of Lansing.

Cases there have leveled off but not have seen the sustained decline of metro Detroit.

Much of northern Michigan and the Upper Peninsula have seen few cases and no obvious surges, with cases ranging from 18 a day to as few as three.

The limited number of cases in parts of Michigan has some leaders, including House Speaker Lee Chatfield, R-Levering, pushing for a differentiated, regional approach to loosening the existing stay-home restrictions.

In terms of raw numbers, over 75 percent of cases have been in just three counties — Wayne, Oakland and Macomb. The numbers dwarf most all others in the state.

Those counties are also by far the most populous. But an examination of  rates of infections (cases for every 100,000 people) shows that some smaller counties, even with few cases, have relatively higher rates of infection, including Otsego, Crawford and Hillsdale counties.

Still, Crawford had just 28 confirmed cases as of Saturday, with 54 in Otsego and 89 in Hillsdale.

Using per capita rates can be misleading.

Hillsdale has a population of just under 46,000 and at least 42 of those infections are from the county-owned nursing home, limiting the overall distribution of cases in the county. 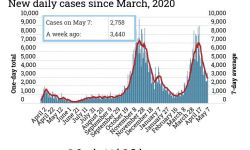 Coronavirus Tracker | Vaccination rate up to 54% to include out-of-state shots; 2,758 new cases 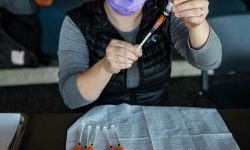 Michigan may not hit 70% vaccination rate until August, as demand falls 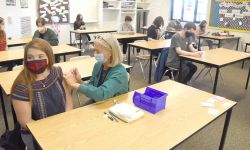