Just three months after her birth, Francesca Marie died of pertussis, or whooping cough. She was too young to be vaccinated, and like other infants, relied on immunity of those around her to create a barrier against the vaccine-preventable disease, her mother, Veronica McNally, has said. (Courtesy photo)
August 9, 2021
Robin Erb
Michigan Health Watch
Coronavirus Michigan

Getting a COVID vaccine isn’t just about protecting yourself; it’s also about being a good neighbor. That was the message delivered Monday by Michigan’s chief medical executive, the mother of a child who had died from an unrelated disease, and others as the Whitmer administration step up efforts to boost routine school vaccines against diseases such as measles, mumps and rubella — as well as COVID-19.

“They're about protecting the community — those who are elderly, those who may have weakened immune systems, or are unable to get some vaccines,” said Dr. Joneigh Khaldun, chief medical executive for the Michigan Department of Health and Human Services. “A choice to vaccinate is not just a personal choice. It's a choice to protect an entire community.”

The event unfolded three days after protestors gathered at the steps of the state capitol to voice opposition against COVID vaccine mandates. Among the protesters were some nurses, most likely to fall under vaccine mandates. The state’s large healthcare systems now mandate vaccines as a condition of employment. 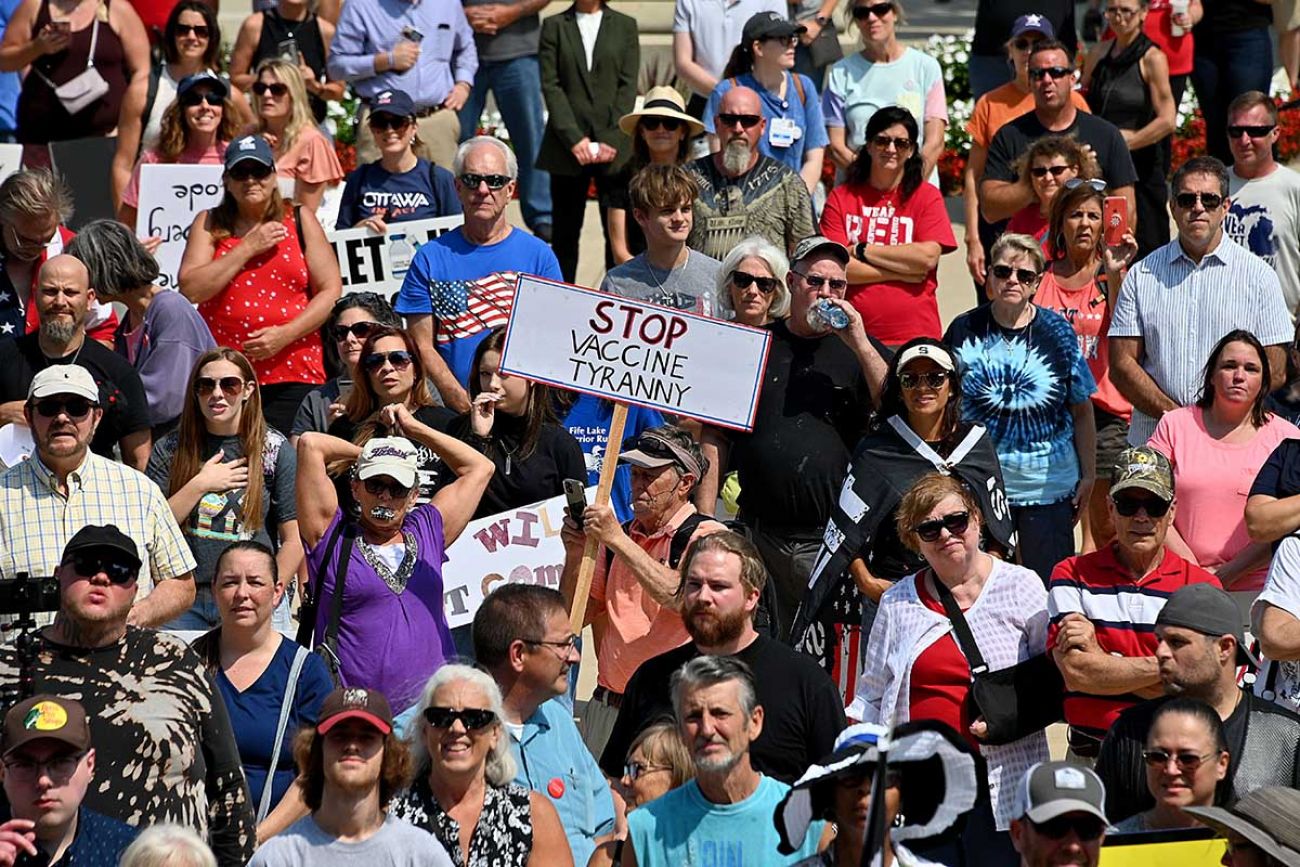 On Friday, protesters in Michigan pushed back against COVID vaccine requirements of some employers, governments and universities.(Bridge photo by Dale Young)

Monday’s event served as a rebuttal to widespread reluctance to take one of three approved COVID vaccines, which have proven safe and reliable in the roughly eight months since they were approved for emergency use in the pandemic. Among the speakers was the mother of Francesca Marie McNally. The child died in 2012 when she was three months old of pertussis, or whooping cough, a vaccine-preventable disease.

“We were having her baptized as they took her from us,” said her mother, Veronica McNally, recalling the moments her child was taken to the intensive care unit. McNally is founder of the West Bloomfield-based Franny Strong Foundation and the I Vaccinate campaign, and a consumer representative on the Centers for Disease Control and Prevention’s Advisory Committee on Immunization Practices.

Her daughter was too young to be vaccinated herself, so like other infants, Francesca’s protection against disease would have come from those who were vaccinated around her, McNally has said.

The news conference Monday had been promoted as a way to address the broader issue of childhood vaccines that flagged during the pandemic, as families avoided health care settings and routine pediatrician’s appointments for fear of catching COVID-19. Of Michigan’s 83 counties, routine vaccinations among children 19- to 36-months old is now below 70 percent in more 46 counties. In November 2019, just 13 counties had vaccine rates that low, according to the state.

Among adolescents, vaccination coverage fell from 77 percent in January to 2020 to 73.7 percent 18 months later, according to MDHHS.

“We simply cannot afford another outbreak or an epidemic of one of these vaccine-preventable diseases,” McNally said.

But it was clear Monday that speakers also were addressing COVID vaccines. (COVID vaccines are now available to anyone 12 and older; vaccines for younger children may be approved in the coming months.)

As of Monday, just under 60 percent of eligible Michiganders had received at least a first dose of a COVID vaccine. That number fell to nearly 43 percent among 16- to 19-year-olds, and nearly 33 percent among 12- to 15-year-olds, according to state data.

Pressure has mounted in recent weeks to boost Michigan’s COVID vaccination rate, as the highly transmissible Delta variant fuels a resurgence of the virus and school districts struggle with how to safely reopen classrooms this fall to in-person learning.

Khaldun said the state itself is not now considering a vaccine requirement, but she noted that private businesses can pass such a mandate.

“We've learned throughout this pandemic that businesses have an incredibly important role to play in preventing diseases and keeping their employees and patrons healthy,” Khaldun said, adding that “at this time, we're not looking at a vaccine mandate here in the state.”