For now, Michigan is a success story in flattening the pandemic curve

Michigan Health Watch
For now, Michigan is a success story in flattening the pandemic curve

Once one of the hardest-hit states, Michigan has – at least for now – managed to  flatten the coronavirus curve in a way that is drawing national attention.

And while health officials warn that the deadly virus could come roaring back if residents let their guard down, the trends are encouraging.

According to the data released Tuesday by the Michigan Department of Human Services:

COVID-19 slammed into Michigan in early March. In 3½ months, the virus has sickened more than 60,000 residents and killed at least 5,790 Michiganders. Just two months ago, hospitals in southeast Michigan were nearly overwhelmed with coronavirus cases. At one point, refrigerated trucks were used to store bodies of those who had succumbed to the virus.

Since then, Michigan's decline in cases and deaths has been substantial and, relative to neighboring states, largely unique. Just a month ago, Michigan was averaging more than 700 new cases a day, well above Ohio's 500 to 600.

But since then, Ohio's case count has remained between 400 and 500, while Michigan has fallen to roughly 150 a day.

Michigan’s data stretch back to March 1 — more than a week before the state announced its first confirmed case on March 10. Subsequent case investigations placed the virus in Michigan earlier than previously detected, confirming 14 infections as March opened and at least 200 active infections by March 11.

Within days, the state was shuttered, its hospitals and morgues in southeast Michigan overwhelmed.  Daily case counts continued to climb to a high of 1,953 new cases April 3 before beginning a halting drop downward days later.

Michigan’s precipitous decline in coronavirus cases has been noticed nationally.

The data analysis website Covid Act Now has marked only Michigan and New York as states “on track to contain COVID,” and CNN listed Michigan as the only state in the country to see infection rates drop by at least 50 percent week-over-week. Overall, CNN identified Michigan as one of 22 states with declining cases, even as 18 others see an increase in cases. In 10 states, cases are stable.

"Michigan is standing out," Gov. Gretchen Whitmer said in a Wednesday morning press conference, crediting stay-at-home orders with forcing the downward trend, and noting the uptick in cases elsewhere.

Some states — Alabama, South Carolina, Oklahoma and California, among them — are reporting sharp increases in COVID-19 numbers.

What we want to avoid desperately is for Michigan to emulate what is happening in other states where people have dropped their guard, where people will have reengaged in an unsafe manner, and where they see positive cases ramping back up,” Whitmer said.

And she again called on social distancing measures and the use of masks in public: "Masks should not be political. They are designed to save our lives.”

Despite the encouraging trend, U-M’s Hyzy and others, including Dr. Teena Chopra, who oversees infection control at Detroit Medical Center, cautioned that Michigan will continue to teeter on the edge of a second wave of the deadly virus for months.

Michigan now must focus on “outbreak management,” said Dr. Emily Toth Martin, whose influenza surveillance lab at U-M is helping track COVID-19 activity in Michigan both for the state and for the U.S. Centers for Disease Control and Prevention.

Public health must be able to react quickly to reports of symptoms in workplaces, for example, even as test results are pending, she said.

“Any chance we have to buy time” is crucial, she said.

Another key to reopening the state both economically and socially will in large part rest on personal responsibility, Chopra at the DMC said. For example, playing tennis in the open air is safer than cramming into a crowded bar.

Sarah Lyon-Callo, state epidemiologist, credits aggressive state measures, including the shelter-in-place executive order, for the continued downturn in cases, but she noted that the virus remains in the state.

As of Tuesday, 364 patients who had tested positive with COVID remained hospitalized. Eighteen more deaths were reported, too. 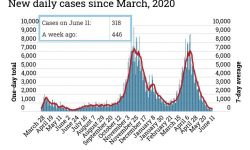 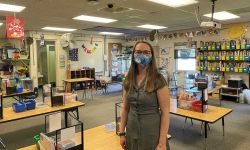