Ticks on rise in Michigan, so researchers get crafty to map the tiny terrors

Michigan Health Watch
Ticks on rise in Michigan, so researchers get crafty to map the tiny terrors

Ticks and the diseases they carry are becoming as much a part of a Michigan summer as walks in the woods, boats and barbecues.

Now, as cases of Lyme disease continue to increase and Ixodes scapularis — also known as black-legged or deer tick —  continues its march through Michigan, researchers around the state are stepping up efforts to track the blood-sucking arachnids.

Twenty-four Michigan counties have received $9,000 each in state funding to monitor tick and mosquito populations, while mapping efforts are underway at Michigan State, Michigan Tech and Calvin universities.

He and others say there’s ample evidence ticks are steadily moving across the state, south from the Upper Peninsula and east from southwest Michigan. 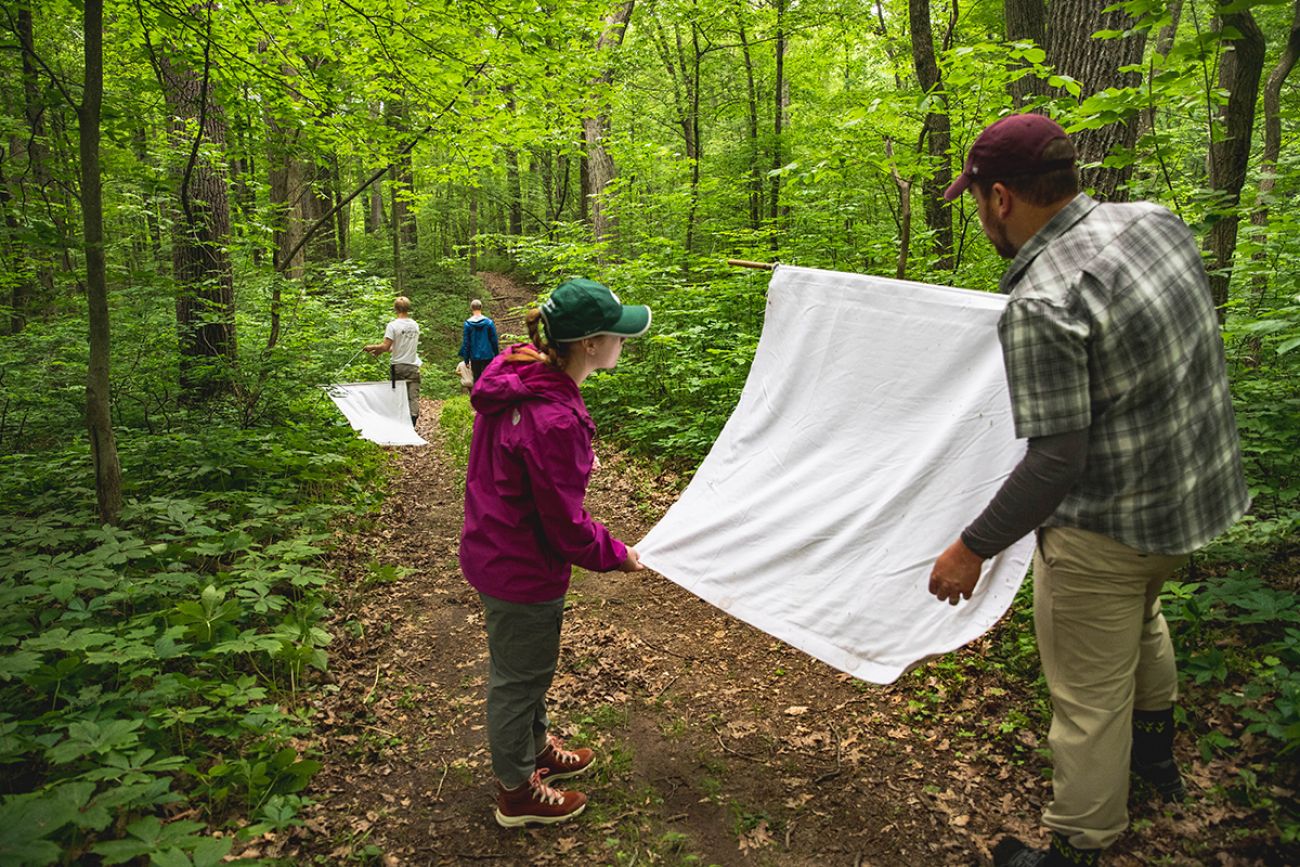 In a rodent-robust summer, for example, ticks have ample hosts, meaning the pests are less likely to latch onto humans, said Jean Tsao, a professor and long-time tick researcher at Michigan State University’s fisheries and wildlife department.

“The question is ‘What really is normal?’” said Miller, whose focus is on the Amblyomma americanum, or Lone Star tick, which can carry bacteria that causes the southern tick-associated rash illness (STARI).

“We do know they are moving northward and inland,” Miller said.

The good news: Lyme disease and anaplasmosis are both treatable if caught early enough  and preventable by avoiding a tick bite. (It takes 36 to 48 hours of being attached before the tick transmits the bacteria during its blood meal.)

For consumers, the best defense against ticks is offense. First, avoid tick bites.

According to the Centers for Disease Control and Prevention:

Miller’s research team on Monday traipsed 150 meters along a trail at Pierce Cedar Creek Institute in Hastings, sweeping alongside with them a denim-like cloth.

Much like socks and shorts, this “tick drag” material attracts ticks as they “quest” to find a host, climbing into weeds and waving its front legs in the air, Miller said.

“They grab hold of whatever brushes up against them, hang on for dear life, then move into place where they can get their meal,” said Miller.

Dropped into ethanol alcohol, the ticks are taken back to the lab when researchers return weeks later, identified and sometimes tested for disease.

At times, the researchers also extract and “sequence” the genetic material of the microbes they carry in order to map the spread of the tick-carried pathogens.

In some areas of the country, for example, researchers have determined that ticks are so thick that doctors automatically prescribe the antibiotic, doxycycline, for any tick bite as a precaution against Lyme disease.

Techtmann and other Tech researchers for the first time this year will genetically “sequence” the ticks’ microbes as part of an $18.5 million federal initiative shared by four Michigan universities to track Lyme and other emerging diseases.

At Calvin, Miller’s team uses an oat mix to lure field mice into spring-loaded, metal boxes, check them for ticks, tag them with itty-bitty ear tags, and release them back to the wild.

The traps are placed upright on a tree trunk. Insulated with cotton, they lure tick-infected, white-footed mice and other rodents to take up residence, often giving birth there as well.

“They’ll preen themselves and their ectoparasites — fleas or mites or ticks —  will fall to the floor and into the drain opening for us,” he said. 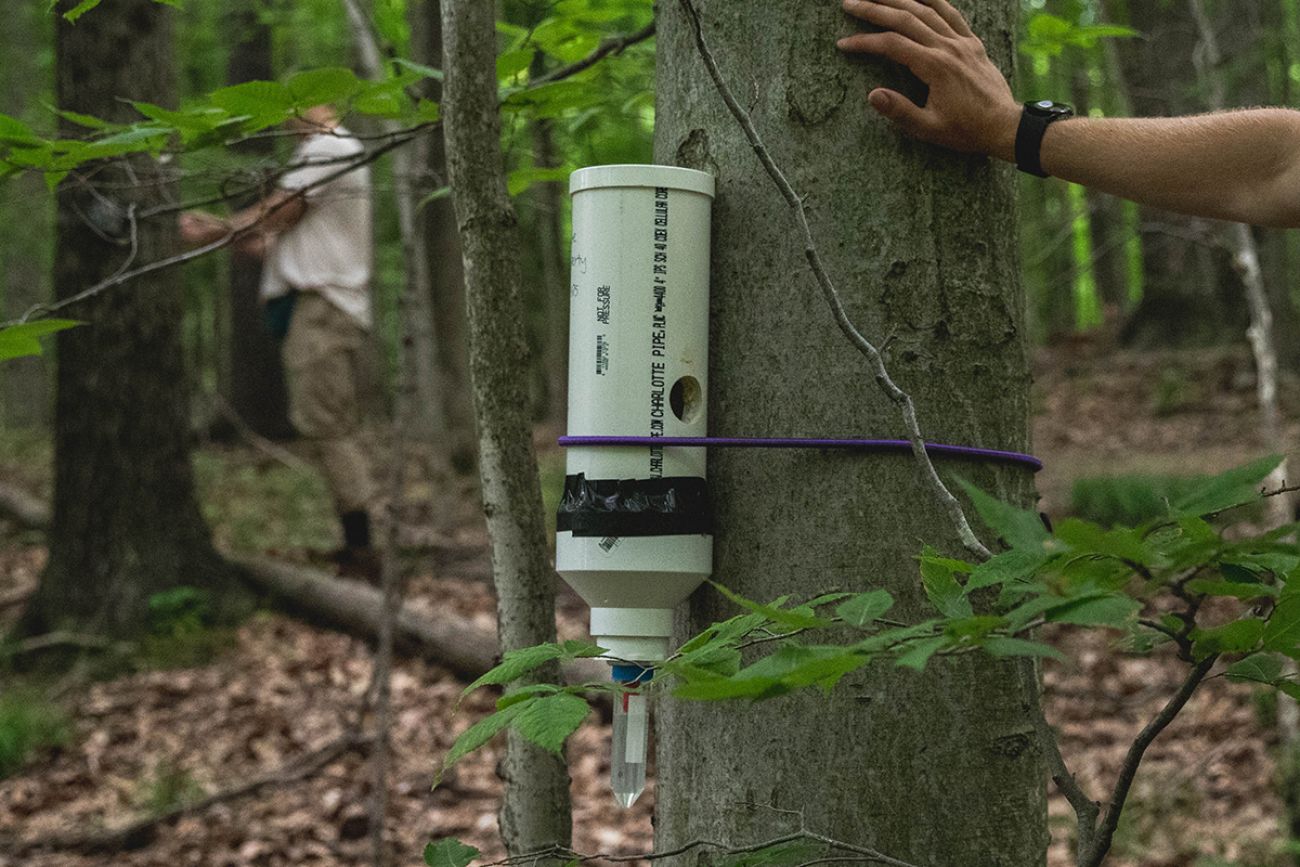 Calvin University researcher Andrew Vander Tuig hangs up a nesting box at the Pierce Cedar Creek Institute in Hastings. If all goes well, it will trap ticks that the small animals pluck off their bodies. (Bridge photo by Daytona Niles)

The ticks are trapped in small jars on the bottom of the pipes that are filled with propylene glycol that Miller and his team bought from Hobby Lobby.

Other researchers In Michigan use dry ice, leaving it in a cooler to melt to emit carbon dioxide. That mimics the exhale of breaths, luring ticks to a trap of double-sided tape.

The tick inventory is still early, but early signs show they are all over Michigan.

“What I can tell you for sure (now) is that the ticks are out. They are out where they weren’t before. And more people are going to see them for the first time while we have no way to stop them,” said MSU’s Tsao.

The inventory is necessary because ticks carry at least a half-dozen diseases in the United States, including Rocky Mountain spotted fever and ehrlichiosis.  Most worrisome for Michiganders is Lyme disease, the most commonly reported vector-borne disease. 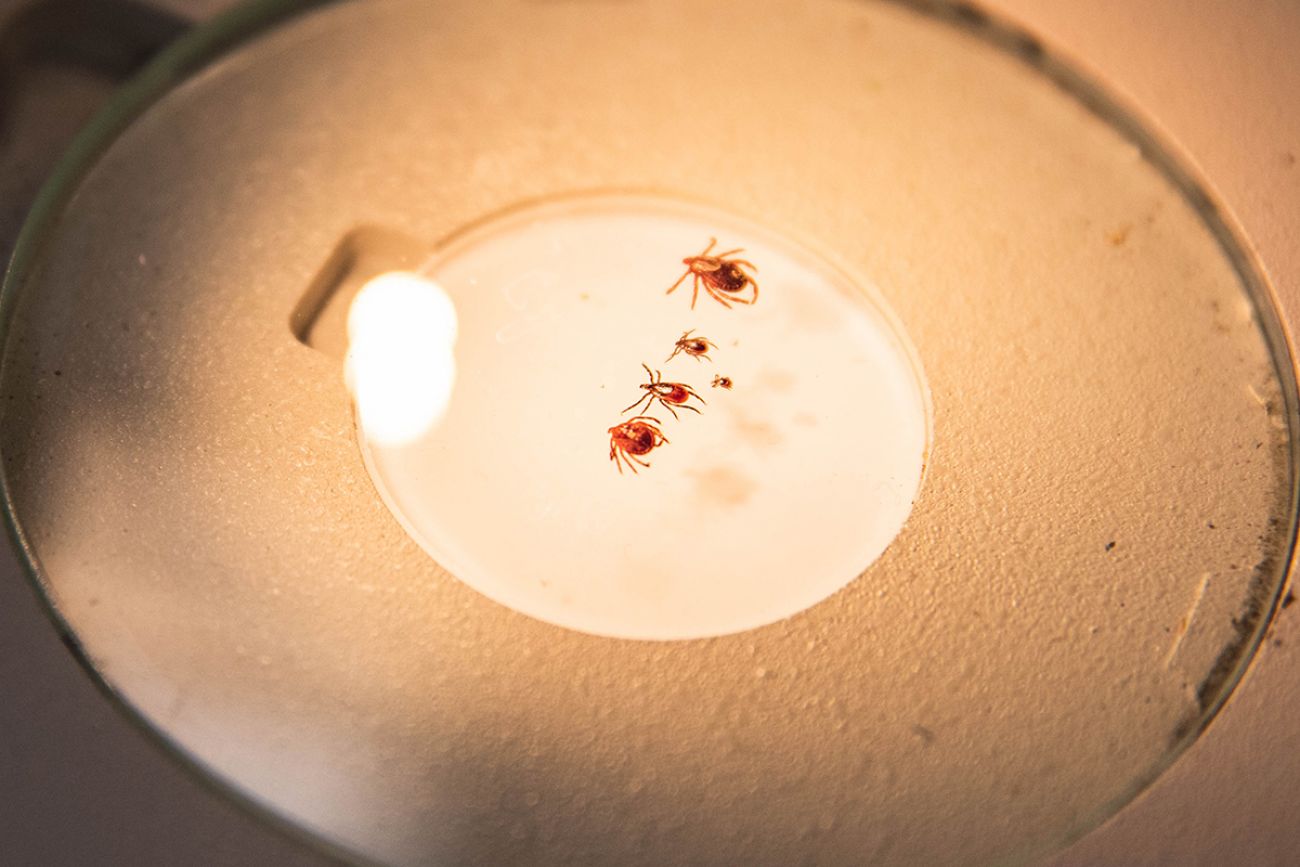 Michigan is home to several types of ticks that can carry disease. They are lit up under a microscope here Monday by researcher Dr. Will Miller of Calvin University. (Bridge photo by Daytona Niles)

Lyme disease can be serious if not treated early, developing into joint pain, neurological problems, including meningitis, Bell’s palsy and impaired muscle movement, heart problems and severe fatigue, according to the U.S. Centers for Disease Control and Prevention.

In 2020, the latest year for which data are available, Michigan health officials reported 305 new cases of Lyme disease throughout 45 counties, up from 66 Lyme disease cases in 21 Michigan counties.

The number is likely much higher. According to a state release, Michigan actually logged 451 confirmed and probable cases in 2020, and 878 last year.

And those cases are no longer confined, as they were in 2011, to the state’s westernmost counties; rather, cases now have been identified across the bottom of Michigan and into metro Detroit, up its western edge and through much of the Upper Peninsula.

Officially, counties at risk for Lyme disease increased to 39 last year from 22 in 2014. That’s likely an undercount, though, because the pandemic interrupted monitoring efforts and made people less likely to go to hospitals for tick bites, officials said.

Another disease, anaplasmosis, the second most common tick-

borne disease in the state, also is on the climb. Cases of anaplasmosis, which without treatment can lead to organ failure and death, jumped from 17 confirmed and probable Michigan cases in 2020 to 56 in 2021, according to the state.

This year, the first “tick pic” sent to MSU’s Diagnostic Services lab for identification was of a black-legged tick.

It was pulled from the scalp of a 3-year-old child. “Fully engorged,” it was likely attached and feeding for at least five days, said entomologist Howard Russell, who reviews pictures and ticks submitted by Michiganders.

“It seems like every day I get a phone call or an email or a message” to identify another tick, Russell said.

It may seem easy to simply brush or wash away a tick and avoid disease altogether. It’s not, researchers told Bridge Michigan.

Since tick nymphs especially are tiny — the size of a poppy seed — they can easily go unnoticed, especially when they attach behind the knees or in the groin or armpits, said MSU’s Tsao.

Certainly, some of the increase may be the result of the detection efforts, acknowledged Oakland’s Hansel: “The more you look for something, the more you’ll find it.”

Still, he added: “There is enough evidence and enough people looking to know that the prevalence of the black-legged tick is increasing.”