It was the second death connected to confrontations over face masks since the pandemic struck Michigan, and the latest incident reflecting the growing, potentially explosive divisions between those who believe Gov. Gretchen Whitmer’s executive order will save lives, and those who feel it infringes on their personal liberties.

Authorities said the incident Tuesday unfolded about 6:45 a.m. between a 77-year-old Lansing man, who reportedly wore a mask, and an unmasked 43-year old Grand Ledge attacker. The two exchanged words in the parking lot of a Lansing-area Quality Dairy before the Lansing man was stabbed.

The Grand Ledge man, identified as Sean Ernest Ruis, was shot and killed about a half-hour later by an Eaton County sheriff’s deputy — a shooting that was caught in a surveillance video released by Michigan State Police.

The older man was hospitalized and said to be in stable condition.

The stabbing outside the store in Dimondale is at least the second incident in Michigan that has ended in someone's death over mask-wearing. In May, a security guard at a Flint dollar store was killed in a confrontation with customers.

In addition to a string of evolving executive orders in a state unevenly hit by coronavirus, “business owners are put in a position of telling customers they have to wear masks,” he said. “It’s tough for everybody.”

The virus, which as of Tuesday had killed more than 575,000 people world-wide, including 6,081 in Michigan, has frazzled nerves and led to violence elsewhere, too. Confrontations over face coverings have been reported around the state, country and world, from Florida, New Mexico and California to Kenya and Canada.

Two days before the Quality Dairy stabbing, a customer at Meijer in Acme east of Traverse City pulled a 4-inch folding knife on a 50-year-old worker after she asked him to wear a mask while shopping, said Detective Capt. Randy Fewless of the Grand Traverse Sheriff’s Office.

The employee walked away from the confrontation, alerting store security, which later identified the customer by his shopper rewards card at checkout, Fewless said.

He described the man as cooperative when a deputy approached him at his Kalkaska home.

While bloodshed and threats of violence may make headlines, even more Michiganders may be wearing thin over increasingly confrontational stares and grumblings in their everyday lives.

“People are getting bolder,” said Judy Blinn, a retired attorney.

Blinn said a woman screamed at her to “go home!” Sunday when Blinn wore a mask to a park in Ferrysburg along Michigan’s western edge to find shade and a few minutes to read.

Blinn, 77, said she was sitting on a bench when a woman approached her and repeatedly “screamed.” Blinn, who has an auto-immune disease that has scarred her lungs and required immune-suppressing medications, called the scene “embarrassing.”

“There was a time when it wasn’t acceptable to get into these kinds of scenes, but now it seems okay to be very open with derogatory gestures and eye-rolling and even confrontations,” said Blinn.

All this, in turn, has sent Michigan’s law enforcement scrambling this week to clarify what it can, cannot and will not do. Saxton, at the sheriff’s association, said sheriff’s offices will use their latitude to decide how to handle situations in the communities that elected them.

“Enforcing the order doesn’t necessarily mean writing a ticket or making an arrest,” he said.

In Grand Traverse County, sheriff deputies will respond to business complaints about customers that refuse to follow orders, citing violators for trespassing, said Fewless. But complaints about businesses that fail to enforce the executive order first will be routed to the health department for voluntary compliance, Fewless said.

On its Facebook page, the Macomb County Sheriff’s Office directed complaints to the Michigan Attorney General’s office, and the Saginaw County Sheriff’s Office said on its Facebook page that Whitmer’s order to wear masks “is not a law and has not been promulgated into law.” Both departments said that they would respond to businesses complaining about customers who do not leave when asked. 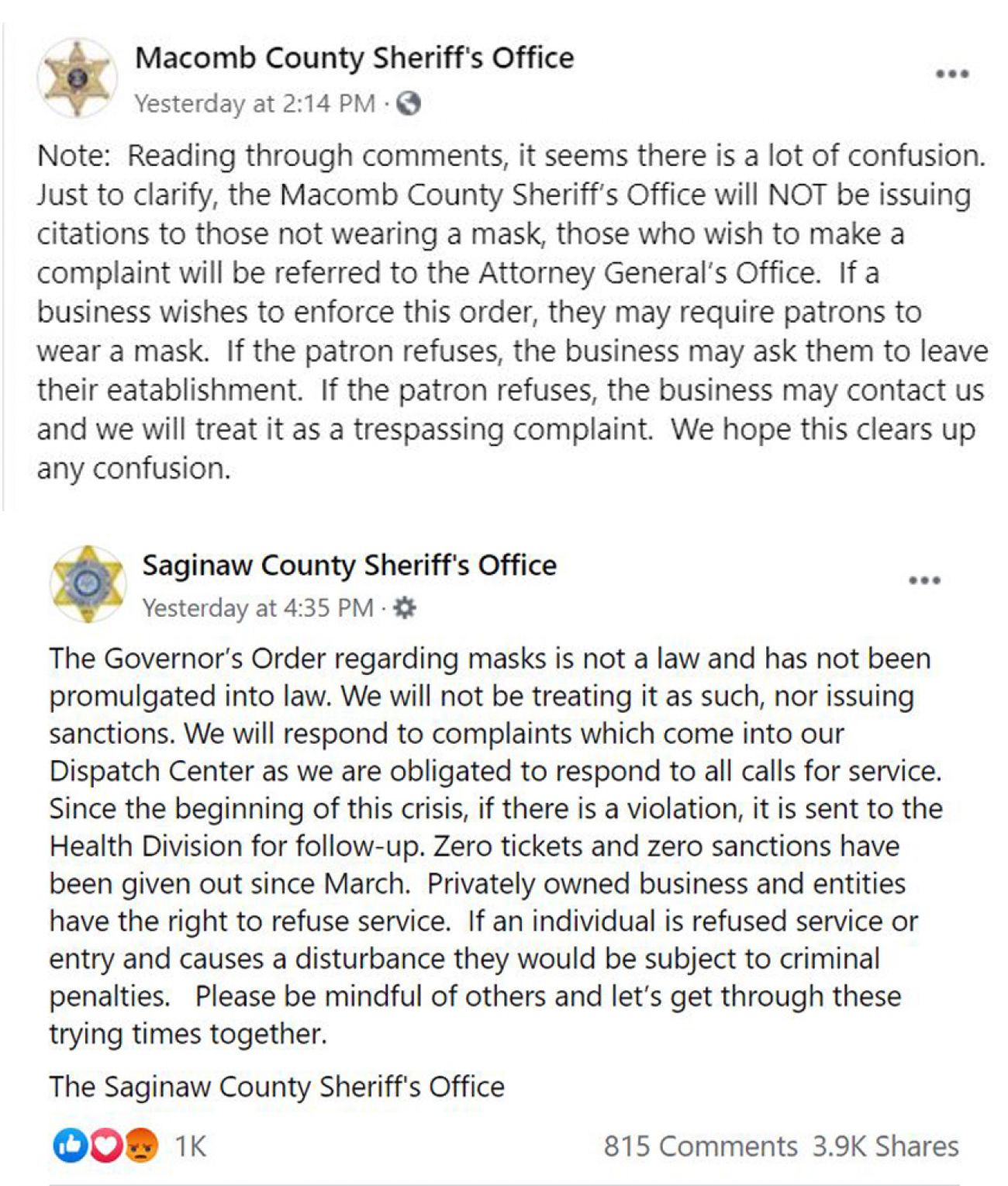 The department said it will not issue sanctions, and in fact, “(z)ero sanctions and zero tickets have been handed out since March.”

The governor’s executive orders “carry the weight of the law,” according to Ryan Jarvi, spokesman for Michigan Attorney General Dana Nessel. Still, he said, the attorney general does “not supervise city police chiefs or county sheriffs.”

“They answer to their constituents, taxpayers and voters, and we encourage those residents who are upset with the actions of those agencies to express their dissatisfaction with the leadership there,” he said in an email to Bridge.

“The number one… pain point.”

All of this, in turn, puts the state’s retail workers and others — arguably worn down already by lockdown, an economy in disarray, and their own anxiety — at the front lines of a battle between those who believe their lives depend on COVID-containing measurements like masks and those who either see mask requirements as an attack on their personal freedoms or, on the extreme, the virus as an all-out hoax.

In another incident, a customer without a mask open-carried a gun into a grocery and made threatening comments that made workers believe he’d use the gun if store employees ordered him to leave, Holland said.

Employees backed off and allowed the man to shop, said Holland, who declined to identify the store or the community where the store is located.

The Michigan Retailers Association has offered webinars on how to de-escalate confrontations with customers who enter stores without masks, recommending that workers stay calm, listen intently to the concerns of the customer, and offer the customer compromises, such as curbside delivery of items.

Holland urged customers to think twice before confronting mask-less customers. “They may have a medical exemption,” Holland said. “Or they may be someone who was scary at the front door and a worker decided to let them in to avoid (a potentially dangerous) confrontation.”

“If you have a person without good communication skills, it can go downhill quickly,” agreed Saxton at the Michigan Sheriff’s Association.

His own college-age son is working as a Walmart greeter, charged with reminding customers about the governor’s order, Saxton said.

Even though the young man is “level-headed” and friendly, “I’m almost more concerned about his job right now than if he were going into law enforcement,” Saxton said.

Epilogue has asked customers since reopening in May to wear masks, and Burkholder has offered disposable masks to customers who donate $1 to children’s literacy efforts.

Before the order that took effect on Monday, he said he and many small business owners were “the bad guys” trying to enforce masks when larger, big box businesses sometimes did not.

“Keeping people safe in our community is our number one priority,” Burkholder said. Whitmer’s order, he said,  “is fantastic.”

“There is no reason to risk your health or your life over the debate of wearing masks in public...Instead, we encourage people to wear their masks and treat others with respect,” he wrote. 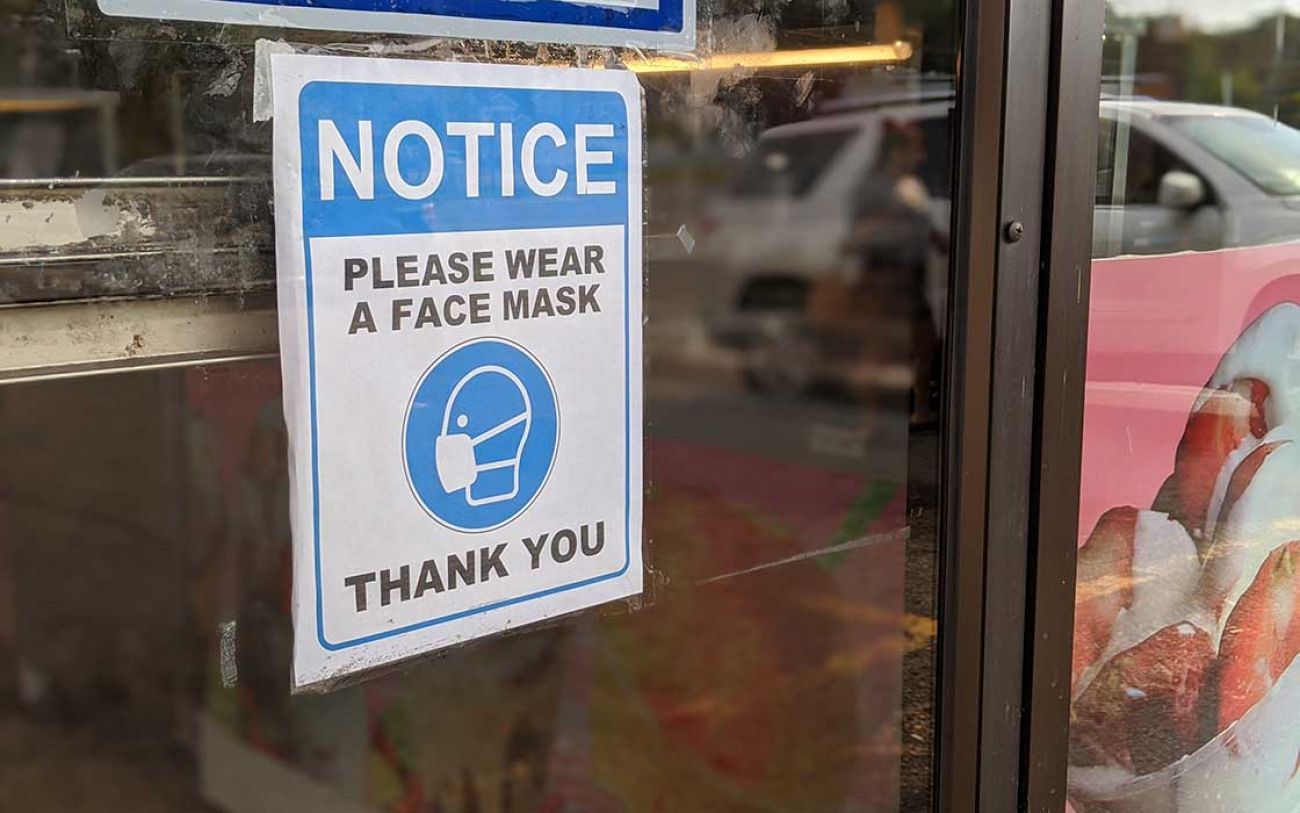 Confusing things further is the deepening divide among the state’s leaders that likely leads some residents to view face masks as a partisan issue.

Democratic governor Whitmer has said the mask mandate — requiring face masks in enclosed public settings and in crowded outdoor gatherings — are necessary to tamp down an increase in COVID-19 cases and allow schools to reopen in the fall.

Multiple studies have suggested that masks do, in fact, help contain COVID-19’s transmission, although it’s uncertain to what extent, according to a research letter published Monday in JAMA Network, an on-line publication by the American Medical Association.

But some Republican legislative leaders have chafed at requiring masks. Sen. Ken Horn, R-Frankenmuth, compared the mask mandate to Soviet-era East Germany. State Rep. Jim Lower, R-Greenville, has been an outspoken critic on social media of the mask mandate.

“I won’t be following this rule. Good luck enforcing it,” he wrote on Facebook after Whitmer issued the executive order Friday. “It is long past time for Michigan citizens to unite against this out of control administration.”

Lower learned of Tuesday’s stabbing and shooting death from Bridge. Lower urged residents to not resort to violence. “I understand your frustration (with the mask mandate), but it’s completely inappropriate to take it out on the person working there,” Lower said.

Lower said the violence that has bubbled up around the mask order “is kind of what I feared. It’s just such a personal thing, an invasion of space, to order you to wear something over your face.

“A lot of people don’t think the science is that supportive of the need (for masks), and others think you’re basically irresponsible if you don't wear one.” Lower said. “That’s why you have this powder keg.”