Michigan is showing signs of improvement in educating the 1.5 million students who attend 3,000 K-12 public schools statewide, but test scores are still only average at best.

Last year, scores on the National Assessment of Educational Progress rose more in Michigan than most other states. The improvement put Michigan closer to the middle of the pack among states, rather than the bottom third.

Most experts agree there’s still much to do, as Michigan recovers from a decade of population declines that drained tax dollars from schools.

“The urgency could not be greater. While it is difficult to face, the data are clear: Michigan children are falling behind,” according to a 2017 report from then Gov. Rick Snyder’s 21 st Century Education Commission.

Last year, Michigan ranked in the bottom third of states in the percentage of fourth-graders deemed proficient in math and reading on the National Assessment of Educational Progress, often called the “nation’s report card.”  The state’s fourth-grade reading scores were the worst in the Midwest.

Michigan’s eighth-grade reading and math results, though, were closer to the national average.

Those benchmarks, however, came from before the coronavirus pandemic forced schools statewide to adopt remote learning at the end of the spring semester and prompted many to offer virtual classes this fall. Many educators worry about the long-term impact of the pandemic on learning.

Experts agree that early reading is critical to later success, as reading proficiency is tied to overall academic and vocational achievement. Conversely, early illiteracy is linked to higher dropout rates and a greater probability of incarceration.

Total K-12 investment in Michigan fell 18 percent between 1995  and 2015 when adjusted for inflation, ranking it last among states nationwide. (Public school enrollment fell nearly 8 percent over those 20 years.)

They approved the nation’s largest expansion of public preschool, enrolling thousands of additional 4-year-olds to get a jumpstart on learning. They also approved a law requiring students to be proficient readers before earning advancement to fourth grade, which Gov. Gretchen Whitmer and educators are working to undercut because they contend it is counterproductive.

Whitmer also has proposed changing how Michigan funds education, by giving schools more money for students who cost more to educate, such as those who are poor or learning English.  Michigan currently gives schools about the same amount of money per pupil, about $8,100 per year, and the state’s GOP-led Legislature isn’t receptive to Whitmer’s proposed changes. 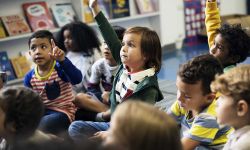 Early childhood education is key to success. Michigan still has work to do.