COLOMA—The Berrien County town of Coloma likes its high school proms. They typically are elaborate affairs hosted in local golf country club banquet halls, with themes like “007,” “Alice in Wonderland” and “Beauty and the Beast,” with one event so large the lights “blew the circuits.”

But in 2021, nothing is typical. So last Saturday night, two tents were erected on a downtown church lawn usually used to play soccer. A DJ played in an adjacent parking lot. Instead of the typical 200 partiers, there were 40 Coloma High School students, most of whom had been infected with COVID-19 or been quarantined for weeks at a time during the school year.

This year’s theme: “Cherish Each Moment,” chosen for students who’ve had too few moments to cherish amid a pandemic.

“These kids didn’t have football, didn’t have homecoming, didn’t have winterfest, didn’t have any of the things senior year holds,” said Denise Hauch, a local community member who has planned 17 proms for the school. “Everyone remembers their senior prom. I remember mine and I’m 70.”

There’s no doubt this prom was memorable.

There were no movie themes or country clubs, but there were string lights adorning socially-distant tents, endless rounds of cornhole and face masks color-matched to floor-length gowns. Bottled water and Ziploc bags of snacks lay largely untouched on tables, alongside hand-painted flowers and discarded face masks. Chaperones brought out Subway sandwiches and later in the evening carried platters of cupcakes around the asphalt dance floor, weaving between girls dancing to the cha-cha slide and boys observing awkwardly from the side, in the nature of teenage dances. 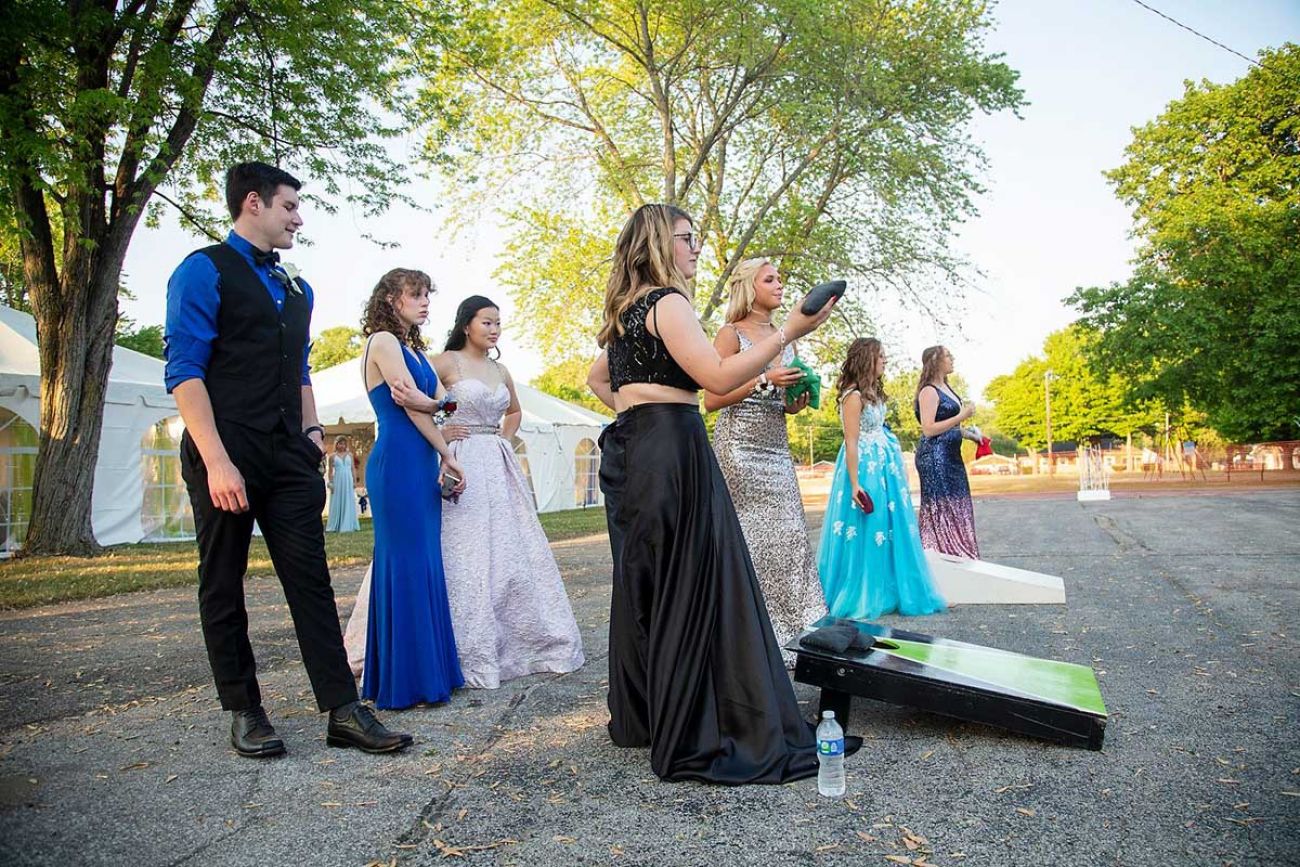 In some ways, it was a night most unusual, and in others, it was a quintessential high school prom.

Across the state, following a year of health restrictions, Michigan high schoolers are taking to football fields and public parks to celebrate a night so many have looked forward to throughout their high school years. Students at Grand Blanc High School in Genesee County even took the party to Ohio, renting out a Toledo ballroom for the festivities

As the state creeps towards a post-COVID normal, high schools are testing the limits of just how much fun teenagers can safely have at a pandemic prom. Such events are simultaneously shadows of proms past, and the best schools can offer right now.

Some regulations are widespread, such as day-of wellness checks and a ban on outside guests. Many schools, like Coloma, a rural high school of about 430 students, followed local health department recommendations that students be seated at tables no larger than six.

While masking was required at many proms, some may have dropped the stipulation following Gov. Gretchen Whitmer’s May 14 announcement, which eased mask requirements for everybody outdoors and the fully vaccinated indoors. Groves High School in Oakland County’s Beverly Hills required attendees to provide proof of vaccination or a negative COVID-19 test obtained within 48 hours prior to its May 14 prom.  Howell Public Schools split its prom into two events to avoid crowding.

Southfield Public Schools drew national attention for its pandemic-era prom arrangements, when an unnamed  “private philanthropic organization” offered to purchase tickets to the June 14 dance for vaccinated students, while unvaccinated students would pay $80 apiece. A news article by the conservative Breitbart News sparked controversy about the arrangement, causing some parents to flood the district’s Facebook page with questions, critiques and offers to sponsor the unvaccinated students’ tickets.

“I understand that this is a very serious and sensitive topic,” Southfield Superintendent Jennifer Green told Bridge Michigan in an email. “It has and continues to be my sincerest commitment to provide students and families with choices and options; while levering outside support systems.”

In Washtenaw County, several schools, including Milan, Chelsea and Whitmore Lake, opted to forgo traditional proms this year, and instead planned “senior celebrations,” according to Holly Heaviland, executive director of community and school partnerships in the Washtenaw Intermediate School District.

The May 13 announcement from the U.S. Centers for Disease Control and Prevention updating guidance on masking and social distancing for fully-vaccinated Americans caught Coloma by surprise, said principal Mike Churchill. When Gov. Whitmer updated Michigan policy the next day (just eight days before the prom), it changed the terms on which the school could plan its prom.

Initially, organizers had reserved five tents, each of which could fit up to 30 people. Students would arrive in groups of six, with whom they’d share a table for the evening. The plan was to have separate dance floors for each tent, with students wearing color-coded masks to signal their membership of a certain tent: blue, orange, green.

The updated guidance enabled them to change tack, setting up two tents instead of five, permitting dancing in a less socially-distanced manner and eliminating mask requirements for attendees. Staying masked up throughout the evening “would have been miserable,” student Ryan Molchan said.

Watervliet High School, four miles to the east along the Paw Paw River, held its prom on May 4, before restrictions were lifted. Students wandered away from the dance, held on the school’s football field, to go bowling, according to Hauch, the Coloma prom organizer.

In Berrien County, on the state’s southwest border, 50.7 percent of residents over the age of 16 have received at least one dose of the COVID-19 vaccine, compared to 58 percent of the state at large, according to Bridge Michigan’s COVID-19 dashboard.

Molchan and his date, Abigail Vandermoer spoke to Bridge inside one of the tents. She wore a royal blue floor-length gown. He wore a matching vest. In the fall, Molchan is heading off to Michigan State to pursue a degree in criminal justice, while Vandermolen plans to study physical therapy at Lake Michigan College.

They were two of just six seniors (in a class of 101) who attended Saturday’s dance, due largely, they said, to the timing of this year’s event. If a senior was to be contact-traced to someone who also attended the prom who subsequently tested positive for COVID-19, they would need to complete a mandatory quarantine and miss their graduation.

Almost all of their classmates skipped the dance, Molchan said, opting to dress up with friends for pictures and go out to dinner instead. But he recently recovered from a bout of the virus, and Vandermoer is fully vaccinated, so they decided to make the most of a night ordinarily so consequential to high school seniors.

In weighing whether to skip prom or risk being quarantined for graduation, seniors drew upon important skills they learned at Coloma. “What we base a lot of our education on is how to make those hard choices, said Churchill, the principal. “I was really proud of them.”

For some, though, the last chance to attend a prom outweighed the risks. “I’ve never gone to a prom before, so I just really wanted to experience it,” said Vanessa Alvarez, a senior who lost her junior prom to COVID last spring.

Alvarez was named prom queen later on Saturday evening, accepting her crown and sash in the middle of an asphalt lot. 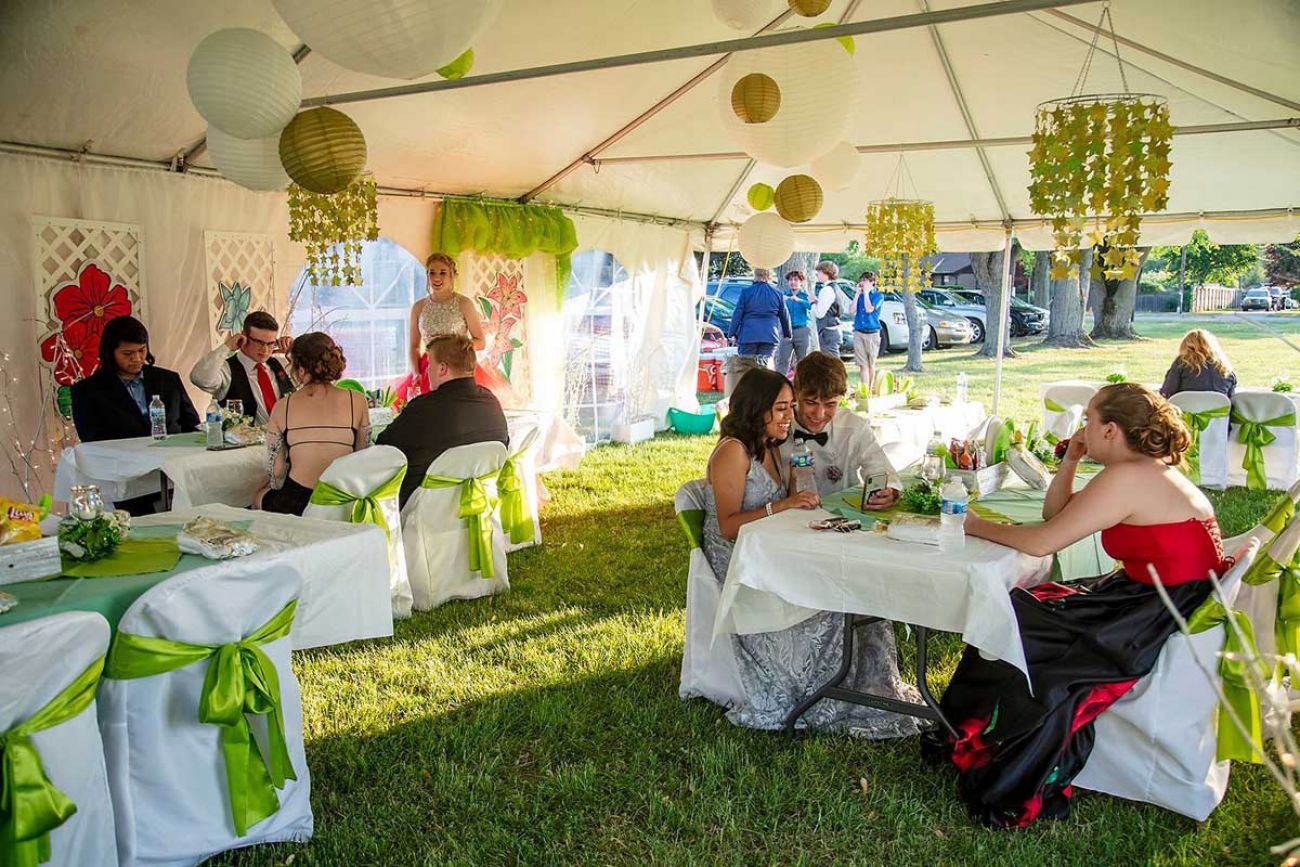 Another senior’s only gripe about the event? “It would’ve been a lot better if my boyfriend could’ve come,” said Tyonne Smith.

Typically, alumni one year removed from the graduating class and students from neighboring schools are allowed to attend as guests. But in this anything-but-typical year, attendees were limited to current Coloma students only.

Ava Genovese, Cali Grenon and Adian Allmon, all Coloma juniors, began helping to plan the event last fall, well before it seemed likely that they would be able to hold a prom. For over six weeks this spring, Michigan logged more positive cases per capita than any other state in the U.S. Coloma students bounced from classroom to online learning, from algebra tests to COVID tests. 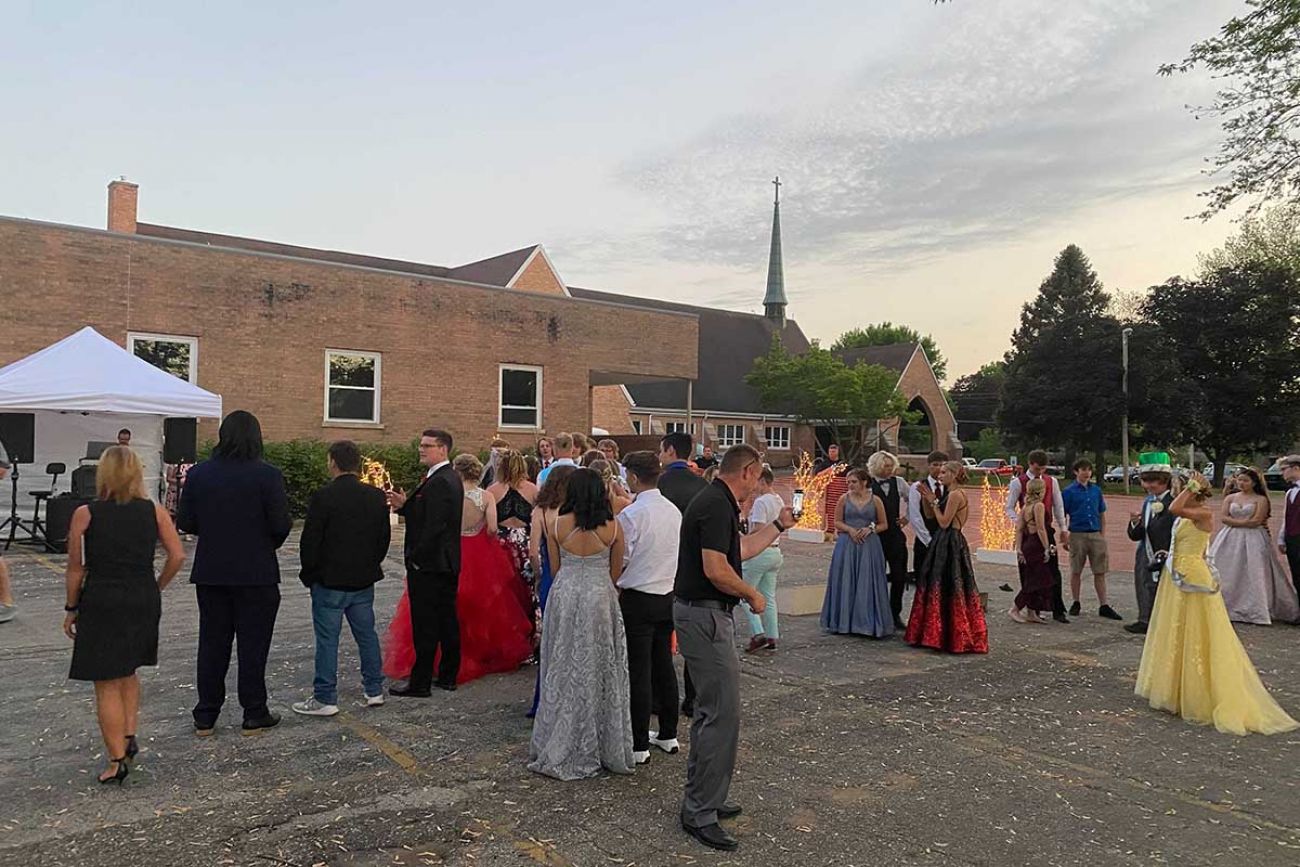 Students enjoy a pandemic-era prom in the backyard of Salem Lutheran Church in Coloma Saturday. (Bridge photo by Olivia Tucker.)

Through it all, they raised money to pay for a prom they might never attend by selling trash bags and five-gallon buckets of detergent.

Prom is “a real community effort” in Coloma, said Hauch, the community prom planner. She said she felt “awful” for last year’s senior class, which lost its final high school moments to the pandemic’s onset, and was determined to make this spring’s dance a night to remember: “I said that if two of them are showing up, I’m gonna do it.”

At around 11 p.m, after the last of the students had left the church parking lot, Hauch watched as teachers and parents put away decorations and stacked chairs.

“It’s bittersweet. You know it’s not the same,” Hauch said later. “But it was worth every penny and every amount of time it took to paint every one of those flowers.”