The administration will partner with several philanthropic foundations to help educate parents about the exemptions to retention available to third-graders, particularly in urban and low-income communities that are expected to bear the brunt of the state’s new retention policy.

The intent, according to Whitmer, is to lower the number of kids who flunk because they are struggling readers.

“That’s the goal,” Whitmer told Bridge Tuesday in an interview previewing her second State of the State address. “The law is ill-informed and could have incredibly harmful impacts on children. What we're trying to do is empower parents so that they can make informed choices on behalf of their kids.”

Whitmer’s actions will likely be popular among education leaders, who in general oppose the law, but struck a sour note for one Michigan business leader and longtime proponent of K-12 reform.

“The teachers and schools have been totally unable to help these kids who are behind in third grade graduate in high school and go on and get any kind of trade job or [attend] community college, or any consideration of a four-year university,” said Mike Jandernoa, founder and CEO of 42 North Partners in Grand Rapids and policy director of the West Michigan Policy Forum. (Disclosure: Jandernoa is on the steering committee of The Center for Michigan, the parent organization of Bridge Magazine, and also a funder to the Center.)

“These kids end up with a life restricted to a job that is low income, and so many end up in prison,” Jandernoa said. “We need to help these kids, not just pass them along.”

Education experts view improving third-grade reading as a way to turn around Michigan schools. In October 2016, the Michigan Legislature passed a law requiring students who are more than a grade level behind in reading by the end of third grade to be retained, joining 15 other states with similar read-or-flunk laws. The sponsor of the bill, now-former Rep. Amanda Price, a Republican from Ottawa County who chaired the House Education Committee, said she hoped the bill would help low-income children, who often have lower reading scores than their more affluent classmates.

The policy didn’t kick in until this current school year, to give schools time to try to improve reading scores and the Michigan Department of Education time to establish grade-level testing from state M-STEP scores.

The third-grade reading law was passed primarily by Republicans and signed into law by Republican Gov. Rick Snyder. Whitmer, a Democrat who assumed office in 2019, criticized the law during her campaign for governor.

The partnership between the state and foundations is meant to try to address some of those inequities, Whitmer said.

“It would be devastating if a parent who is trying to hold down two jobs just to keep their head above water has a child who is penalized, and the parent never had the ability to weigh in, or even knew that that ability was there” to have a child exempted from the law.

There is no state funding allocated for the effort. The governor’s office will serve as a convener for foundations working to help families navigate the third-grade retention mandate.

“The governor’s office has asked us to come to the table to address this issue,” said Punita Dani Thurman, vice president of program and policy for the Skillman Foundation. The read-or-flunk law “created a sense of urgency in raising awareness on the issue, and we think it’s unfair to be putting the burden on children and families alone.

“The law has a number of good-cause exemptions to make sure families have a voice in the process. But it is a process, and you have to be aware of the process. What we’re finding in Detroit is that it takes a number of avenues to reach parents” with the information about how to appeal a state recommendation that their third-grader be retained.

Children whose reading scores would flag them for retention nonetheless can move on to fourth grade under a number of “good cause” exemptions, including:

Teachers and principals can request a good cause exemption for students.

Parents also can ask for an exemption, and schools are required to consider the request, with the principal making a final determination.

The concern of Whitmer and leaders of foundations that focus on urban and low-income communities is that parents won’t know they can appeal the retentions.

In Battle Creek Public Schools, 83 percent of students are economically disadvantaged, and 65 percent are racial minorities.

Retaining 5,000 Michigan third-graders because of low reading test scores would cost the state about $40 million, because the students will be in K-12 public education for an extra year, said Kyle Mayer, assistant superintendent at Ottawa Intermediate School District and a member of Whitmer’s literacy commission.

“We have an opportunity to ask ourselves if the money we’re going to invest in retention is the best way to improve literacy,” Mayer said. “One example, we could shift that investment to kindergarten readiness.

“We’ll be better served when our focus shifts from retention to prevention.”

The governor told Bridge her quarrel is with the means, not the ends, of the third-grade reading law.

“I share the goal of ensuring that everyone is a reader by the end of third grade,” Whitmer said. “But the best way to do that is to really wrap them with the services and supports that they need to be successful,” rather than forcing students to repeat the grade.

“A child who has been penalized for not learning doesn't make them more eager to learn,” Whitmer said. “Sometimes that actually does such a number on their confidence that it undermines their ability and makes it even harder for them to be successful.”

In December, Senate Majority Leader Mike Shirkey, R-Clearlake, said he was open to tweaking the third-grade reading and retention law.

Whitmer said Tuesday she “raised [the issue] personally numerous times” with Shirkey. “I think that there have been some comments that there was an openness to it [changing the law], but I'm worried that time is of the essence now and that's why we wanted to get this underway.

“I still would invite any legislator who wants to make a change in the law to work with me and to do so quickly. But at this point, I'm going to do everything I can to just support families and kids.” 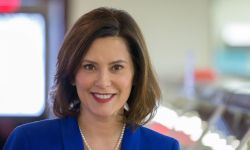