Students returning to Michigan’s college campuses might come ready to party, but the pandemic will make it harder this year.

State agencies and local officials are working with bar, restaurant and store owners in college towns to line up strategies to limit crowds and encourage safety precautions. While the initiative started with businesses, it’s also broadening to off-campus gatherings.

“It’s not the parties that concern us as much, it’s the risk of additional transmission of the coronavirus,” Ridley said.

Classes at Central Michigan University begin Monday, and Ridley said Mt. Pleasant already is dealing with large-party enforcement. One nuisance ordinance ticket was issued on Wednesday night for a party that, by the time police arrived, still had about 20 people inside a house. The amount is double what’s allowed in the state during the pandemic. It appeared that neither masks nor social distancing were part of the event, police said.

It wasn’t a surprise to Ridley: “One of the challenges is with many of the bars closed and restaurants with reduced occupancy, it gives less places for the students to go,” she said.

Other college towns in Michigan are bracing for similar experiences as students return to communities amid heightened concerns over the size of house parties.

“Individuals from so many parts of the state are coming together,” Ridley said. “Typically, college students want to gather and be with their friends. We have concern about whether that will result in higher [COVID-19] incidence, … not just students, but in the surrounding community.”

Business owners are watching the situation, too, since the rapid influx of people raises the stakes for businesses trying to maintain rules over masks and occupancy.

“Our owners in those college towns are a little nervous about what’s going to happen,” said Scott Ellis, president of the Michigan Licensed Beverage Association.  “More so about private parties where there is no control.”

Many colleges are moving to online-only or partial in-person experiences, and several including Central and Northern Michigan universities are opening earlier as part of their pandemic responses. Grand Valley State University this week announced that it would do 1,500 random COVID-19 tests per week, while Eastern Michigan University and Michigan State University are requesting daily health screenings for anyone on campus.

School is returning as younger people are among the fastest-growing demographic of Michigan’s 90,000 coronavirus cases.

Those aged 20-29 and younger comprise 25 percent of the state’s cases since June 5, up from 12 percent before then, while over the same period, cases among those 19 and younger have spiked to 17 percent from 3.9 percent, according to state data. The surge follows outbreaks tied to parties and unofficial proms.

Egan and other state officials have met recently with officials in campus towns to outline executive orders from Gov. Gretchen Whitmer about crowd sizes and masks. The state also is amid a series of online workplace safety programs related to COVID for officials and business owners from seven college cities, including Kalamazoo, Marquette, East Lansing and Allendale.

The state is encouraging local officials to use ordinances to keep off-campus events from getting out of control and spreading the virus.

The scrutiny comes after outbreaks emerged following Whitmer’s order that allowed bars and restaurants to reopen at reduced capacity on June 8. Within weeks, an outbreak affecting about 150 people was traced to Harper’s Restaurant and Brewpub in East Lansing.

Public health officials learned that bar staffers didn’t know they had to require patrons to wear masks. Dancing was allowed; so was standing in line out front, where bar staff said they couldn’t control social distancing.

Harper’s owners had to go before the state Liquor Control Commission in July after Ingham County closed its doors. Now, it will only be allowed to reopen with a firm plan in place to control the largely student crowd. Meanwhile, the state tightened restrictions on bars, limiting which could reopen to those that sell 70 percent or less in alcohol. Patrons are ordered to wear masks unless eating or drinking, remain seated at tables and receive drink service while standing at a bar.

But the Harper’s incident put many college towns on alert that returning students are not just a campus issue.

“There’s going to be dozens of tiny Harper’s, so we need to think about that, not just the big one,” Egan said.

Safety compliance is important to halt the spread of the virus, said Linda Vail, health officer for Ingham County. Understanding the rules from the state hasn’t always been easy, she said.

Executive orders issued for bars, restaurants and stores have been plentiful, Vail said, and she said she believes the average owner has struggled to keep up and find specific information. The sessions should help clarify the rules, but she said she wishes they had been offered sooner.

“It would have been helpful [as they reopened,]” Vail said, “but it’s good they’re doing it now. And particularly in college towns.”

Vail said bars and restaurants in East Lansing appear to be complying with regulations. She hopes that continues when students return.

“I do think they ‘get it’ a little more than they did before,” she said.

Egan said college towns are trying to get ahead of enforcement by conveying the rules and consequences not just to business owners and landlords, but also to returning students: No gatherings of more than 10 people inside a residence, no more than 100 outdoors.

In Mt. Pleasant, a group of city and CMU employees went door-to-door in campus neighborhoods to welcome students back and convey expectations.

And in Ypsilanti, Eastern Michigan University will ask student organizations, including fraternities and sorority houses, to sign a COVID-19 pledge that it will unveil on Monday, said spokesperson Geoff Larcom.

EMU also will take over case investigations during contact tracing for students who test positive. “That will allow us to better monitor off campus situations,” Larcom said.

Egan remains hopeful that colleges and their towns can discourage many large gatherings before they have a chance to become a problem.

“The challenge with COVID is that when you find the problem … it can already create community transmission,” he said. “Breaking up parties is not where we want to be.

“We want to engage up front so folks will commit to containing [the virus] and we’ll keep our economy open.” 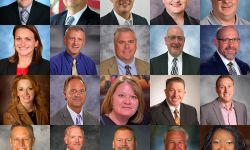 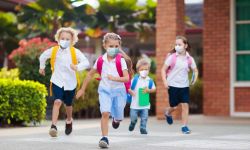