The deep economic pain caused by the COVID-19 pandemic is creating a tidal wave of demand for free food that is straining providers in Detroit, the nation’s poorest big city, and all across the state of Michigan.

Tens of thousands of residents show up each day at a growing number of food sites, with many going away empty-handed because there still isn’t capacity to meet the profound needs.

“There is so much of that going on,” said Phil Knight, executive director of the Food Bank Council of Michigan. “The need is huge all across our service areas. And we serve all of Michigan’s 83 countries,” The Lansing trade association represents seven major food bank suppliers in the state. Those regional food banks supply more than 3,000 sites in Michigan where residents get food, from soup kitchens to schools to senior citizen centers.

BridgeDetroit, a new, independently funded news and engagement organization focused on Detroit’s citizens, is partnering with Detroit-based Outlier Media in a texting service that asks Detroiters about their needs during the COVID-19 pandemic, and matches them with reported information and resources. (Text 73224 to participate.)

Since April 6, more than 900 Detroiters have responded and 40 percent have inquired about access to food. 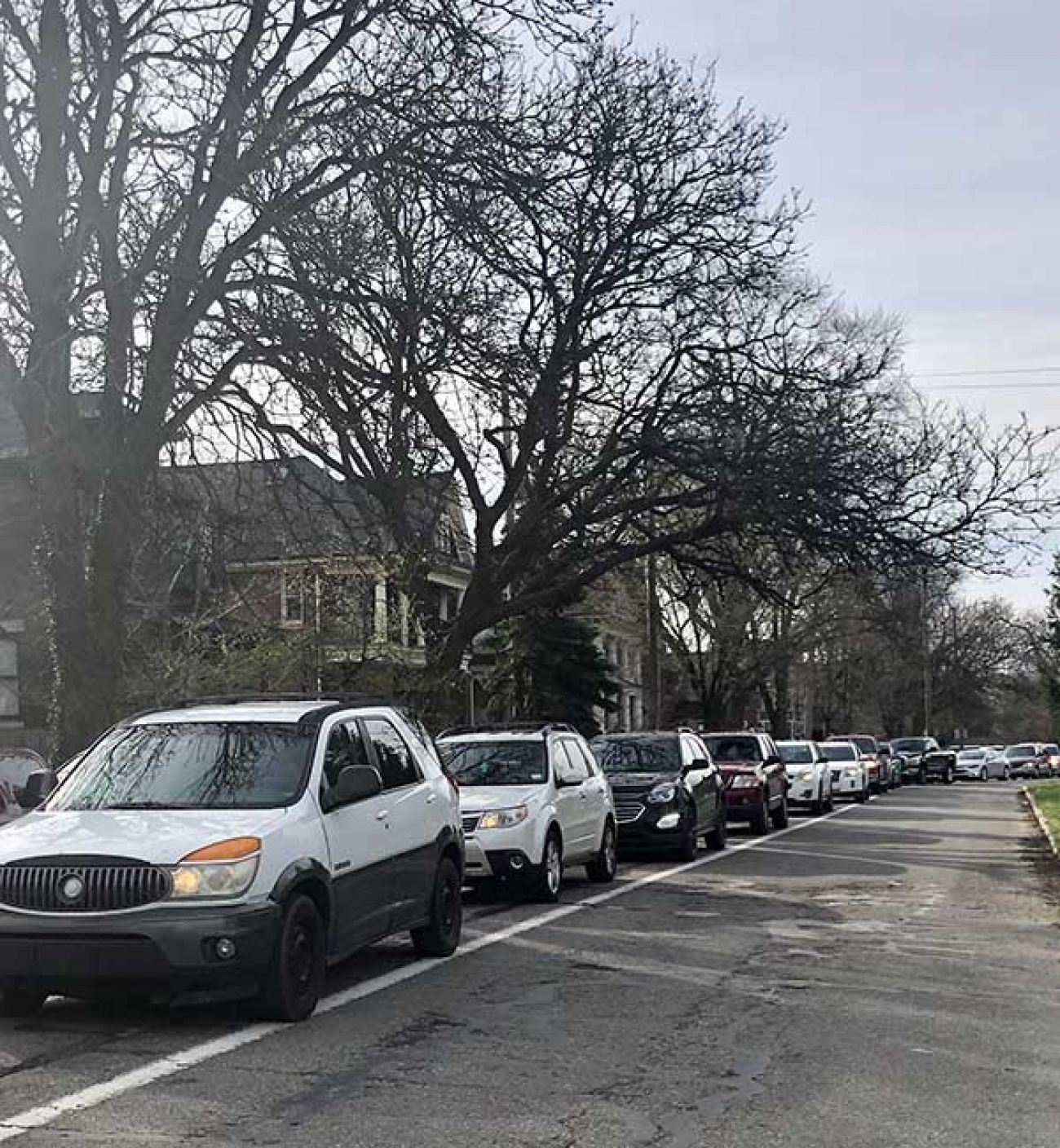 In southwest Detroit, a temporary drive-thru food site on West Vernor was set up Tuesday morning in the parking lot for social service provider Southwest Solutions. The line of cars stretched for more than seven blocks, the only traffic on the normally bustling commercial stretch of Vernor.

It’s one of 66 additional food distribution sites set up by Gleaners Community Food Bank of Southeast Michigan since March 19.

The hope Tuesday was to give out bags of groceries from 9 a.m. to noon, each with a gallon of milk, a bag of apples, a jar of peanut butter, a can of corn, a package of uncooked rice, tins of tuna and spaghetti. It’s meant to last at least a week.

Diana Alaniz used the temporary southwest Detroit food site the two times it’s been made available since the pandemic began. Her husband was laid off from his construction job almost a month ago now. Her two teenage daughters have been laid off from their part-time jobs at nearby stores. Luckily, Alaniz’s job at a nearby health care center went to full time from part time. 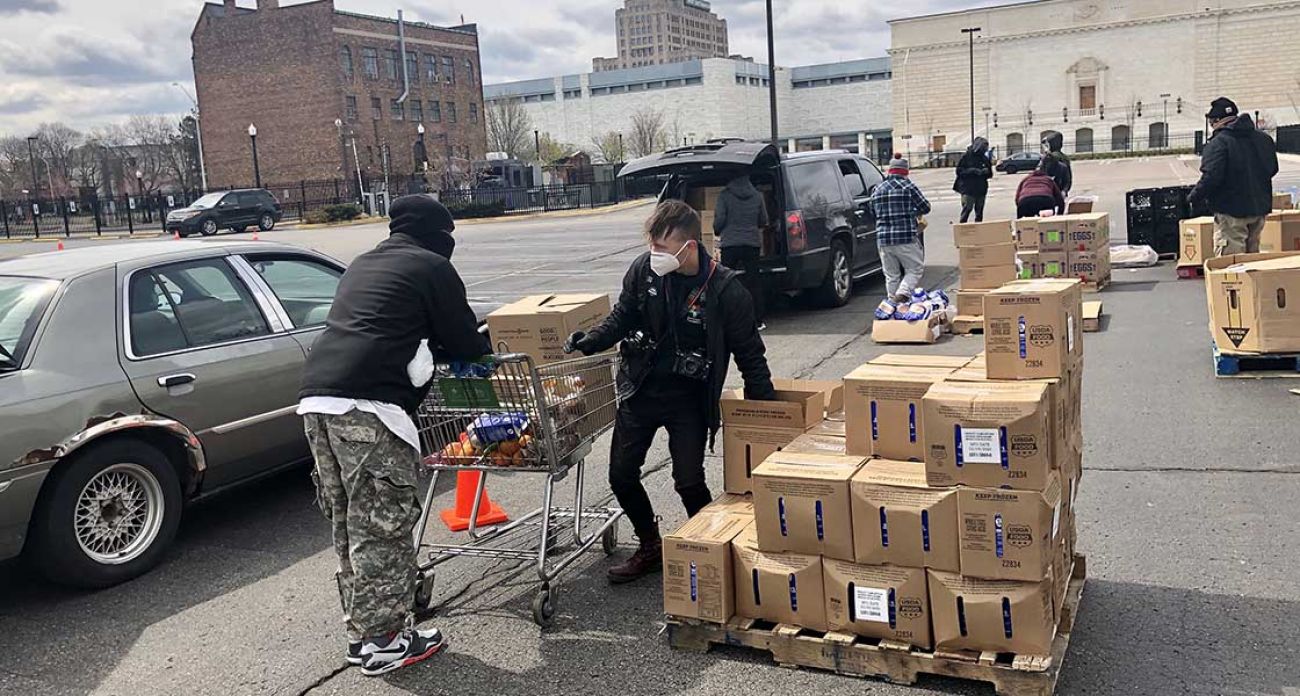 Still, she and her household of six rely on less than half of the income they had before the pandemic. “I’m so grateful for Southwest Solutions and Gleaners for the food. Really, every little bit of help goes a long way right now. It’s stressful, because you don’t know how long it’s going to be this way.”

Last week in Delta County in the Upper Peninsula, about 500 vehicles lined up to get free food from another drive-thru pickup site. About 200 vehicles were turned away after supplies ran out, officials from two food bank groups said. Food banks in every part of the state are reporting similar scenes at various sites.

The need has come in three waves, according to Knight, head of the Food Bank Council of Michigan.

First came families with children who relied on school programs for some meals. Then came a wave of seniors as centers who often served them have been closed to slow the pandemic. Now, comes the suddenly new unemployed, many of whom have never needed food banks before, Knight said.

State food banks just received a waiver from the federal government this week that will mean people seeking the supplies won’t have to be interviewed and prove they qualify to get free groceries, Knight said. “We know everything is changing fast. The demand is coming from many people who normally don’t need our services,” he said.

Nearly 1 in 4 of Michigan’s 4.76 million workers have filed for unemployment since mid-March. The University of Michigan expects a total of 1.2 million lost jobs by the second quarter, peaking in May as workers exhaust paid time off.

Among those in line in southwest Detroit Tuesday was a 26-year-old Dearborn resident, Trent, who said he was too embarrassed to give his last name. Before the pandemic, Trent was working two jobs – as a bartender and waiter and at two different places in Dearborn and Detroit. He had never used a food bank.

“It was either this or buy groceries with my credit card — and I know that’s crazy. And kind of depressing to think about, to be honest,” he said, about getting the free groceries. “I’m down to $18 in my bank account.”

He’s waiting for his first unemployment check, along with other incentives like the one-time IRS check and an additional $600 a week for workers like him who are laid off due to the coronavirus.

“I’ll still be able to pay rent and my student loan and car payment and everything else. But the situation is scary tight,” he said. On Monday, he applied for a temporary job at Kroger.

In metro Detroit, Gleaners has supplied an additional 950,000 pounds, which is enough for 32,000 households, since mid-March. That’s on top of the 3 million to 4 million pounds of food it normally supplies every month. Not all of the 66 additional food sites are running out of food,  said Stacy Averill, spokeswoman for Gleaners. The sites are set up twice a month at each location. Gleaners’ staff are monitoring how many people go to each site and, hopefully, each one will be equipped the next time so it won’t have to turn people away in the future, she said.

“The need for food is skyrocketing while donations are plummeting,” said Molly Kooi, spokeswoman for Feeding America Western Michigan. The food bank supplies the western part of the state and the Upper Peninsula. The food bank is spending $100,000 more a week to buy food as major donors like Meijer and Walmart have not been able to provide in the amount it usually does, Kooi said.

Meijer Inc. didn't respond directly to the question whether donations may have dropped at various food banks. Instead, the Walker-based retailer pointed out several ways it is trying to help meet new demand. That includes giving $2.2 million to supply over 400 food pantry partners across the state, said Christina Fecher, a Meijer spokeswoman.

Also, the first supply of cereal, peanut butter and other pantry staples that Meijers helped secure for the Michigan Food Bank Council will be shipped by the end of the week, she said. Meijer intends to supply multiple weeks of shelf stable food. Additionally, it has donated a trailer full of dry groceries such as snacks, canned goods and beverages to Feeding America West Michigan as well as $10,000 to Detroit Blight Busters. Its various stores also continue to provide other donations, she added.

In Washtenaw County, the donations from local grocers have dropped by half while requests for food has tripled, said Eileen Spring, president and CEO of Food Gatherers food bank.

“Another stress point is retailers are struggling with logistics and transportation,” of getting more food delivered to them, Knight said.  “There is enough food. It’s not getting to people in the time we are used to-- because so many things are fluid. It’s unprecedented.”

Another challenge:  Most food banks have lost most of their volunteers due to the state’s stay-at-home orders. Food Gatherers in Washtenaw County is one of several agencies relying on National Guard troops for labor.

“It’s a tsunami,” said Spring, the head of Food Gatherers. ‘’We survived the first wave of sudden new challenges. But I think successive waves are coming.”

Louis Aguilar is senior reporter for BridgeDetroit, a new, independently funded nonprofit news and engagement organization focused on Detroit and its citizens. 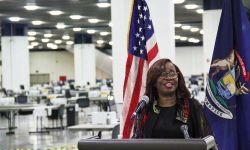 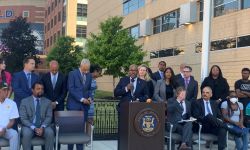