6 lessons Michigan restaurants and bars can learn from Florida's reopening

Florida restaurants reopened at 25 percent dining room capacity on May 4. They’re learning what customers expect during the COVID-19 crisis. (Photo by Keegan Gardner)

VENICE, Florida — Michigan restaurants have been telling Gov. Gretchen Whitmer they’re ready to open and — starting Friday  — dining rooms across much of northern Michigan will be given that chance.

Establishments in the Upper Peninsula and much of the northern Lower Peninsula (32 of the state’s 83 counties) will launch the state’s new approach to sit-down restaurants. Tables will be six feet apart. Servers will wear masks. And each restaurant’s capacity will be cut in half to achieve social distancing during an ongoing pandemic.

All of that will bring more challenges to an industry that has struggled since dining rooms closed March 16 as the coronavirus began to tear through lower Michigan.

Which raises the question: What can Michigan restaurants learn from operators that already reopened?

Bridge Magazine talked to two former Michigan residents and one Ohio native now living in Venice, Florida, to find out. Restaurants in this Gulf Coast city south of Sarasota were allowed to open May 4 at 25 percent capacity, a number that rose to 50 percent on May 18, leaving restaurateurs to determine what that meant for their operations and their futures.

Reaction from customers, so far, has been encouraging, said Kay Kropac, owner of Cafe Venice.

“A good amount of our regulars came out in the first couple of nights we were open,” Kropac said. “We got a lot of calls, notes and emails saying ‘good luck.’

“They’re glad we reopened,” she said, “even if they’re not ready to come out yet.”

1. Make the most of your outdoor seating

All seating needs to offer patrons six feet of distance from others, but many restaurants find that easiest to achieve outdoors.

The three Florida restaurants that comprise the Venice Pier Group “have so much outdoor seating,” said co-owner and president Justin Pachota. “That’s been a real advantage.”

That includes about 650 combined at Sharky’s and Fins, adjacent restaurants in the group on the Gulf of Mexico near a public pier and beach. Both naturally make the most of patios, decks and beachfront.

A sister restaurant on the Myakka River, Snook Haven, is more like a campground, Pachota said. That’s allowed his employees to set up picnic tables in a wide area, boosting seating.

Pachota said municipal efforts to expand dining space outdoors could make a big difference to restaurants trying to survive during a virus outbreak.

“I was nervous about going back,” said Brannon, a bookkeeper who moved to Venice from southeast Michigan in high school. “I didn’t know what to expect. I had a mask on, just in case.

“Between great weather and the precautions, outside was great.”

Her next two restaurant meals were inside dining rooms. By then, she said, “I didn’t worry.”

2. Staffing will stay a top concern

Worries about revenue generation and paying staff topped concerns when Florida restaurants closed to dining on March 20. Reopening without trained staff became a top concern as they prepared to serve customers again.

“Staffing is really the key limiting factor there,” Pachota said. “If you can’t get your staff back, you won’t be able to function.”

“Because of the programs put in, people were making up to $875 a week on unemployment,” he said. That’s higher than the average server wage and kitchen pay, a dynamic also playing out in areas of Michigan.

The restaurant group set pay incentives to attract workers to come back. The first two weeks it paid $20 per hour, then dropped the hourly wage to $18 for the second two weeks. Federally created Payroll Protection Program loans are helping to fund that.

Now, about 90 percent of the restaurant group’s 300 workers are back to work. Some may be painting the building or cleaning, instead of their previous jobs, but the staff is in place as business rebounds, Pachota said.

Restaurants must quickly adapt to state regulations to reopen, Pachota added, so  restaurateurs need to stay informed and share information with staff.

“Staying in touch with staff was probably the biggest advantage for us,” he said.

3. Have a copy of state COVID regulations handy

Being able to point to what is allowed and what isn’t is helpful with customers and staff when questions arise about why a regulation is in place.

Conflicts with customers are infrequent, but Pachota is ready to present guidelines from the U.S. Centers for Disease Control and Prevention, the Florida governor’s office and the order allowing his restaurants to operate.

“I run restaurants,” Pachota said. “I’m not a scientist.”

Remove your bar stools if Michigan’s regulations don’t allow them. Same with salad bars and other physical remnants of what aren’t allowed. That will keep patrons from trying to use them.

“At the outside bar, there’s probably some gray areas,” Pachota said. “But we follow what I consider to be the letter of the law.”

4. Make sure the math works

Reopening likely won’t mean an immediate return to pre-COVID-19 sales, Venice’s operators said. Consider the time of year, previous year’s sales and what the next few months will look like before committing to timing, menu and staffing. In Venice, many restaurants had record-breaking sales through February. Now, they are reopening in what is for Florida slower months, operators said.

One new factor to consider in sales projections: Unless an operator aggressively pursues takeout business after reopening, carryout sales likely will start to slide immediately.

Once a restaurant commits to reopening, Pachota said, “you have to have the systems in place and the [personal safety] supplies. The supplies are hardest because they’re out of your control.”

They also can be expensive, Kropac said, and after weeks of shutdown or carryout only, sales may not leave an operator enough cash to stock up.

At Cafe Venice, Kropac said she is buying all of the items like masks and extra gloves without passing costs onto the customers. Unclear is whether that’s feasible for other operators.

“We started with a limited menu,” said Kropac. “I wanted to take it slowly to see how it went.”

She knows other restaurants wanted to open, but at 25 percent of capacity, that may have meant eight usable seats.

“That’s not going to pay the rent,” Kropac said.

5. Make your place a post-coronavirus destination

Pachota said his beachside restaurants’ sales are at about 70 percent of 2019 levels. He’s expecting more customers to return, but also considers where opportunity may lie.

More restaurant promotions may be on the horizon in Florida.

“That’s going to be a big deal,” said Pachota, who moved to Venice from Union Lake, Michigan, with his parents, Mike and Donna, who founded the restaurant group.

Tapping into the post-COVID-19 travel industry will look different: Think about attracting people who live within a few hours’ drive. “They’ll make day trips, even with no hotel stays or airline flights,” Pachota said.

Don’t be shy about touting all of the steps taken to prepare for reopening. Let customers know about your new hand-washing station for staff; keep the presence of hand-sanitizers obvious. Those are the reasons that many people will come back.

That’s the biggest draw for Brannon, the returning customer. She recently stopped at a restaurant near her home to see how it was configured.

The carryout lanes were separate from dining, which was set up for at least a six-foot distance between tables. And plastic shields had been built. All of those factors put that restaurant on her list for the next time she goes out.

“I will choose them,” she said, “based just on what I observed.”

6. Reviewers will review, but it won’t be about your food

What will your customers post on Yelp and other online review sites? They’ll be telling the world about how well you protected them. That includes mentions of your staff are wearing masks and whether tables at appropriate distances.

“Our feedback has been really strange,” Pachota said. “For the first couple of weeks, it’s all been safety and sanitation, not food and service.”

Everyone won’t be happy, just like in the days before the pandemic, Kropac said. But rebuilding trust is part of reopening.

“Some will say you’re overdoing it,” he said. “But in the long run, people are very happy that we’re covering the bases.” 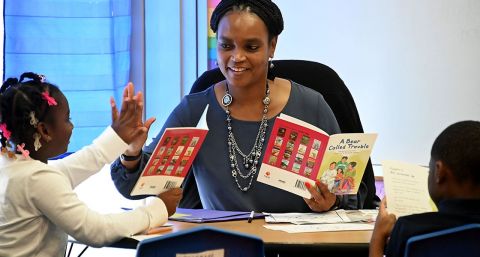 Gov. Gretchen Whitmer’s school reopening plan has one surprising takeaway: Schools can choose whether or not to bring all students back to class at the same time, with no state requirement that forces schools to run classes in shifts.

Good thoughts. It's not always nice to eat outside, but it will be necessary as a starting point. I'd recommend closing some street traffic and putting some outdoor canapes for sun and rain.

Eh, Michigan isn't Florida -- which is why people move there more than they move here. I'll be curious how much local residents and businesses that aren't restaurants like the idea of removing even more parking spaces for a short patio dining season.