Why Michigan cherry industry lost trade fight with Turkey, and its Plan B

The Michigan cherry industry has faced some tough economic times in recent years, and views with suspicion the trade practices of rival imports from Turkey.  (Bridge file photo by Bob Campbell)

In a report posted on a federal website, the U.S. International Trade Commission concluded that U.S. tart cherry producers were “not materially injured” by Turkish imports. The report found that Turkish cherries “did not enter the U.S. market in significant quantities (and) did not take significant market share from the domestic industry.”

The unanimous ruling by the nonpartisan, independent federal agency, shocked Michigan’s struggling tart cherry industry, which grows nearly three-fourths of the nation’s supply. Its ruling was announced in mid-January, but the reasoning for its decision was withheld until the report was quietly released two weeks later.

In September, the U.S. Department of Commerce ruled in favor of a petition by the Dried Tart Cherry Trade Committee, representing four Michigan and one Utah tart cherry processor, and required that Turkish exporters begin escrowing huge amounts of cash to cover anticipated duties.

The domestic trade group argued the government of Turkey illegally subsidized the Turkish cherry industry, allowing its growers to sell the dried fruit in the U.S. below market prices.

But the ITC flatly rejected that conclusion, writing that information it reviewed “supports the finding that (Turkish) imports generally were not sold at lower prices than the domestic like product.”

The ITC acknowledged what Bridge Magazine has previously reported: that the U.S. tart cherry industry, based largely around Traverse City, has seen sharp financial setbacks in recent years. Net sales declined steadily from $87.6 million in 2016 to $71.7 million in 2018. Over this same period, losses grew from $717,000 to $3.7 million. Other details in the ITC report were deemed proprietary and not included for public release. 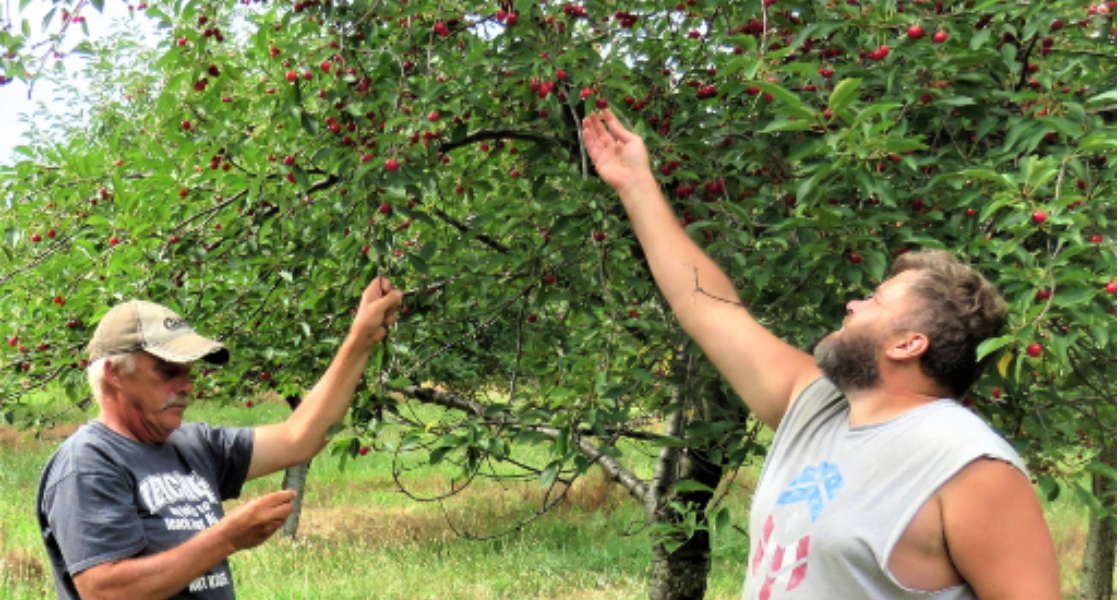 Raymond “Rocko” Fouch and his son Nick said this summer that they were selling two farms in northwest Michigan but keeping a third as they seek to diversify crops beyond tart cherries. (Bridge file photo by Bob Campbell)

Tim Brian, president of Smeltzer Orchard Co. in Frankfort and a member of the domestic trade committee, said the ITC accepted Turkish exporters’ financial numbers rather than the public information the U.S. group submitted. Because of the proprietary withholding of some information, he said he doesn’t have a good explanation for why.

“It’s disappointing,” he said, adding that an appeal to federal court is unlikely. “Unless there’s a flaw with the data, it would just go back to the same people.”

Another avenue of attack

Another tart cherry industry group is pursuing a new avenue of attack, filing a separate action that accuses Turkey of essentially fencing its product into the U.S. through Brazil.

Exactly one week after the ITC decision was announced Jan. 14, the Dewitt-based Cherry Marketing Institute filed a formal complaint with U.S. Customs and Border Protection, requesting investigation of what it suggested was a suspicious and dramatic increase in shipments of tart cherry juice from Brazil in 2019.

Julie Gordon, president of the cherry institute, told Bridge that its internal probe showed that Brazil, not a big tart cherry producer, exported 315,000 liters of tart cherry juice to the United States from January to November 2018, but that those exports had exploded to 3.9 million liters over those same months in 2019.

In 2019, Turkish exports of tart cherry juice to the United States fell by about 2 million liters from the previous year. The change came after Turkey lost its “developing nation” duty-free status when President Donald Trump signed a measure in November 2018, adding Turkey to a list of nations required to pay the half-cent per liter duty on cherry juice exports. Brazil, however, still had the special status. A bilateral scheme to avoid a duty would be illegal.

“This is pretty aggressive for us. I don’t believe we’ve ever done a customs allegation in the 20 years I’ve been here,” Gordon told Bridge. “But we’ve never had the trade issues we’ve had the past few years.”

For every student that tested positive, there were dozens of friends or classmates found to be in close contact with them, sidelining them from the classroom as well.

First Person | Back to school in Michigan: Too new, weird and heartbreaking

An 11th-grader in Beaverton in central Michigan returns to school. Mask compliance is shaky. Emotions are raw. And students and teachers are doing their best to cope with a bizarre new reality.

An Amish community, with help from the ACLU, argues that Lenawee County is violating its religious freedom by demanding it stop using outhouses and spreading human waste in fields. Local residents are backing the Amish.

Something for elected officials to bring up the next time Pres. Trump is here in Michigan.

There IS a reason why the Soo Locks and F-35's at Selfridge were speaking points while he was here in Michigan.

The solution to the cherry farmers' problems is simple. Get Hannity, Carlson, Ingraham, and Trump's other advisors on Fox New to plead their case. Then Trump will give them some of the $28 billion in taxpayer money he's doling out to his "Great Patriot Farmers." What, don't like being lumped in with the other farmers who are the new welfare queens? Then support senators Gary Peters and Debbie Stabenow, who are doing their best to work within the rules to help you.

Why aren't our Senators doing something? If not, vote them out.

Why vote out Senators who had NOTHING to do with the trade bungle?

Well Turkeys not dumping enough " cheap" product in the U S because cherries in any form are priced out of our family's budget.

No surprise as to why Turkey was favored over Michigan. The president probably got a telephone from Mr. Erdogan telling him to do this and he obeyed the Turkish dictator (just like he did when he pulled out our troops and abandoned the Kurds, resulting in chaos and death). Now that the president wants Michigan's support again, will he support the cherry farmers? In his own constant phrase, "We'll see what happens." There is no strategy, no planning, no support for hard-working US citizens. Arbitrary decision-making based on the influence of whomever you last talked to is incredibly damaging.

Thank you, Rose. My sentiments exactly!