Patti Poppe used to run coal plants for DTE Energy. Now she’s CEO of CMS Energy and subsidiary Consumers Energy. Her company vows to retire all of its coal plants by 2040, filling the void solely with renewable energy and tools like efficiency. (Bridge photo by Jim Malewitz)

This story is part of a multi-newsroom collaborative project called Middle America's Low-Hanging Carbon: The Search for Greenhouse Gas Cuts from the Grid, Agriculture and Transportation. The effort, led by the nonprofit news organization InsideClimate News, includes 14 Midwest newsrooms and aims to give readers local and regional perspectives on climate change. For more, click here.

JACKSON — Patti Poppe likes to joke about the bumper sticker she once stuck on her Chevy Volt electric hybrid car: “I ♥ coal.”

These days, the sticker sits in Poppe’s office at Consumers Energy’s headquarters in her hometown of Jackson. It’s a symbol of her personal evolution on climate change — and the transformation she’s leading at Michigan’s largest natural gas and power provider.

Poppe is the CEO of Consumers Energy’s and its corporate umbrella CMS Energy. The company serves natural gas and/or electricity to 6.7 million residents across Michigan’s Lower Peninsula, and it’s rapidly weaning itself from fossil fuels in favor of cheaper, renewable power that doesn’t spew heat-trapping gasses linked to climate change.

Similar trends are playing out across the country as coal-fired power plants become too expensive to operate and climate concerns grow. But Consumers’ carbon-cutting ambition stands out.

Consumers plans to gradually replace its retiring power plants solely with renewable resources and tools to lower energy demand, opting against building a natural gas plant that Poppe said would “saddle the people of Michigan” with unnecessary costs.

“We can modularly add renewable resources as we need them that can match supply and demand,” Poppe told Bridge last month. “You can turn around a solar farm very quickly. It's the most flexible and adaptable resource.”

Consumers still generates more than 30 percent of its electricity from coal, but it’s shuttered seven plants since 2016 and vows to close the remaining five by 2040 — part of its plan to slash carbon dioxide emissions 90 percent by that date.

Banking heavily on new solar power, the company aims by 2040 to generate 43 percent of its electricity from renewables. Existing natural gas plants in Zeeland and Jackson — along with a pumped storage hydroelectric plant it shares with DTE along Lake Michigan’s shores in Ludington — should provide Consumers enough baseload power to steady the grid as it scatters more renewable energy, Poppe said. 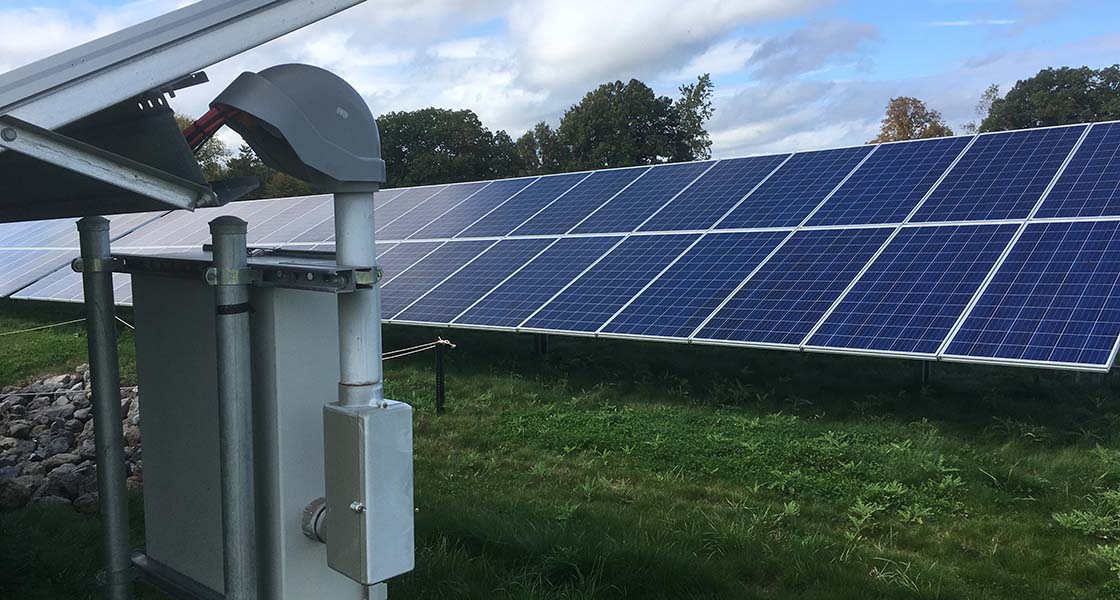 Consumers Energy plans to dramatically ramp up solar power to reach its target of cutting emissions 90 percent by 2040. It won’t be building any new natural gas plants, which CEO Patti Poppe said would “saddle the people of Michigan” with unnecessary costs. (Bridge photo by Jim Malewitz)

Meanwhile, the utility aims to lower energy use through efficiency upgrades and “demand response”— paying customers to power down during peak demand.

“The potential on demand side could fundamentally change the total cost structure of the energy system,” Poppe said.

DTE, which delivers power to 2.2 million customers in Southeast Michigan, is also ditching coal, touting a pledge to cut emissions 80 percent by 2040.

(Both Consumers and DTE use 2005 as benchmarks for their target.)

DTE plans to add more wind power in the next few years before it significantly ramps up solar. But it’s also leaning on power from natural gas, which burns cleaner than coal but still emits carbon dioxide.

DTE CEO Gerry Anderson, who calls climate change “the defining issue of our era,” said building more natural gas power is the only way to keep the lights on while three coal plants retire — and a key reason they’re shuttering earlier than expected, he said.

“Some utilities are going from coal plants to building a natural [gas] plant, whereas other utilities are leapfrogging natural gas and going directly from coal to renewables,” he said.

Coal once dominated Michigan, but now it’s fading fast. Since 2010, Michigan utilities have retired at least 26 coal generators at 15 power plants, while 17 generators at six plants are set to retire by 2025. Three other old coal plants converted to burning natural gas. This map shows that changing energy landscape. Click on the coal plant icons for details.

Anderson said comparing the plans of DTE and Consumers amounted to apples and oranges, in part because DTE generates more of its own power than Consumers, which relies more on outside contracts.

“Every company has its own starting point. Everybody’s path is different,” he told Bridge.

But in analyzing each company’s long-term plans, Inskeep noticed another key difference: DTE projected solar power costs would decline at a much slower rate than many experts do.

The company relied on historic costs of solar that “fly in the face of trends we’ve been seeing now for well over a decade,” Inskeep said.

“The results certainly could have shown that there were cheaper and cleaner alternatives to building a new natural gas plant.”

But Poppe said she and her colleagues didn’t always acknowledge how greenhouse gas emissions — much of them from the power sector — were warming the earth putting much of the planet in peril. 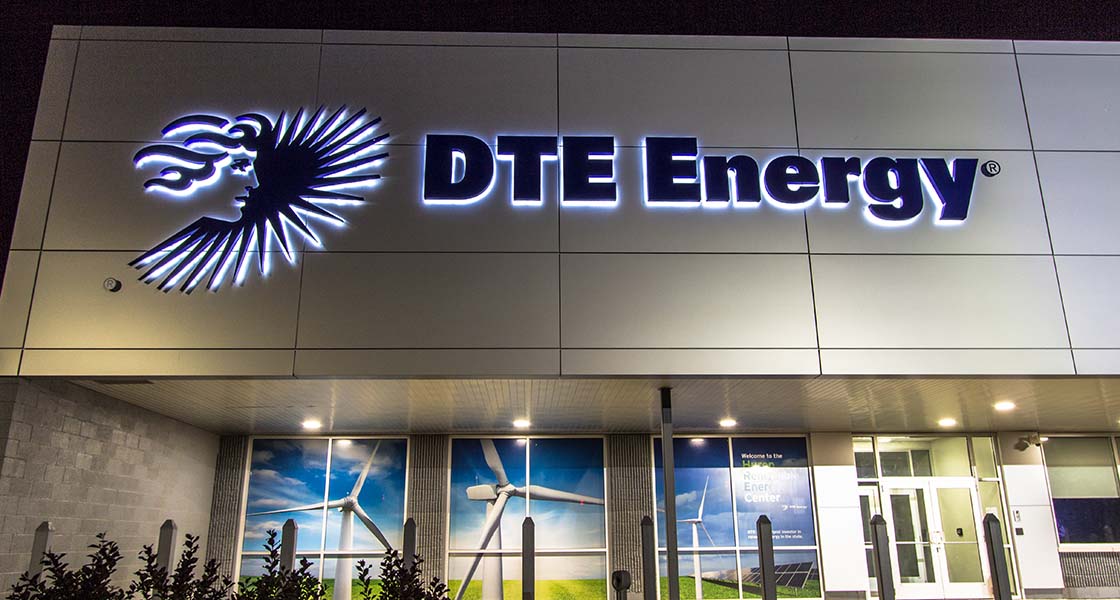 DTE Energy, which provides electricity to 2.2 million customers in southeast Michigan, plans to reach its goal of cutting emissions 80 percent by 2040, a decade earlier than it planned just two years ago.

For years, Poppe said, she didn’t do her homework on climate change.

“I was willing to just take that sound bite — that there was correlation [between greenhouse gas emissions and warming temperatures] but inadequate data to support causation.”

The company was already asking whether propping up coal plants was a poor economic move, Poppe said, and understanding climate science prompted executives to think more ambitiously about renewable energy.

“We connected the dots. We could do what was right and be more aggressive than we had been before,” Poppe said. “Because the economics and the planet benefits were aligned.”

Could Michigan reach experts’ target of net zero emissions by 2050?

“I would definitely not rule it out,” Poppe said, noting it would require major breakthroughs in energy storage to complement intermittent renewable power.

Editor’s Note: Both the Consumers Energy Foundation and DTE Energy Foundation are donors to The Center for Michigan, the parent organization of Bridge Magazine. Their contributions did not influence the reporting or direction of this article. A full list of funders is available here.

Even a thirteen year payback beats the payback on my system by 27 years. The company that installed it did a horrible job and refuses to redo it unless I dump even more money into the system.

OK, They plan to reduce demand to what solar and wind can supply by "demand pricing" basically charging folks enough to shut things off.

They are a utility with a guaranteed rate of return, so if they sell less, they still make their bonus.

I sure hope the regulators watch this plan closely. Michigan could be paying a lot more for electricity and with less reliability.

Big Utility loves solar -- as long as they can control it and keep their monopoly. We once had 'public utilities' that worked for us, not corporations and corporate profits.
DTE and Consumers #1 priority is maintaining their monopoly on power production and maintaining their high profits.
We are just 'payers' for DTE and Consumers, not 'customers'. They do not want to serve us efficiently and fairly they want to maximize their control and profits.
This needs to change (look to California).

Two large natural gas-fired merchant electric plants are planned for Consumers Energy territory -- could future purchased power from these be the reason why CE is not building natural gas fired plants on their own?

Sounds like we are going to be buying a lot of electricity from other states. A couple of years ago, the BWL's solar projects only produced a maximum of 5 watts at any given time for a two week period due to cloud cover. As I understand it, solar doesn't produce much energy 4 months out of the year due to the angle of the sun. According to the latest NASA information, water vapor, by far, is responsible for global average temperature increase when compared to other factors. The last two years, though, the global average temperatures have dropped.

We have rooftop solar and couldn’t be more pleased. Michigan residents have been fleeced by dirty energy decades beyond what was necessary. Now the utilities want to move in on “green energy” but they still will control the market and that’s what it’s about.

Thanks for sharing your opinion. Solar panel technology and improved inverters produce energy 12 months of the year. Granted, a sunny day is best, but solar panels do not have to be pointed at an optimal angle to the sun. Panel efficiencies are now between 19 and 39.7%. Battery technology is able to store more electricity for less money and that is coming down . I don't think the scientific community is being properly represented by your comments on water vapor increasing global temps and that the average temp is dropped. The last two years were the hottest ever recorded.

Patti Poppe will be speaking at a free clean energy event, "Michigan's Clean Energy Future, a Community Conversation," in Traverse City 5-630pm, Wednesday, May 22. (It's part of Groundwork's Michigan Clean Energy Conference.) The public event will also celebrate 100% clean energy commitments made by Traverse City and Cherry Republic and also Glen Lake School's successful solar array fundraiser. If you are reading this, you are invited! Info at: https://www.facebook.com/events/2202559310054459/

I attended the talk by Patty Poppe. When asked about whether Consumers Energy would follow the lead of DTE and end net metering, she dodged the question. "We're studying the issue" and "we want to be fair" means that Consumers will end net metering in 2020 when they get their next rate increase from MPSC.

Sure as long as they can play the farming the tax payers game and they have a guaranteed rate of return, wind and power has a future and makes sense to pursue. Without those ... not so much.
Also what is the environmental impact of making solar panels? I've heard they're really nasty. Is this another case of things polluting other people's homes far away isn't a concern?