Greetings from Mackinaw City, where Line 5 fears threaten a way of life

MACKINAW CITY — George Warner didn’t hesitate when asked what issues most concern  folks in this wildly popular tourist town at the tip of Michigan’s mitten.

“Line 5,” he told a reporter while buying goodies at Devon’s Mackinac Island Fudge Company, one of few businesses open Wednesday during a slow, snowy lead-up to tourism season.

Caitie Dannatt, 27, nodded emphatically from behind the cash register as she rang up the 68-year-old Air Force veteran.

“I’m afraid it’s going to bust. As old as it is, you’re rolling the dice,” said Warner, who lives in Cheboygan and often pops into Devon’s after checkups at the U.S. Department of Veterans Affairs health center here.

As northern Michigan awaits a thaw after a long winter, Warner and Dannatt are among those casting wary eyes on the Straits of Mackinac. Below those waters lies Line 5, a 645-mile oil pipeline that has become a magnet for environmental concerns, largely because it is 65 years-old and owned by Enbridge Energy Partners, which has been accused of being less than transparent about the upkeep of the line.

Bridge Magazine visited Mackinaw City on Wednesday as part of the Center for Michigan’s "Truth Tour," a traveling caravan and mobile newsroom that will engage and inform state residents throughout the year about the most critical issues facing Michigan.

Details: Be part of the 2018 Michigan Truth Tour
More events: Use Facebook to get reminders on our Truth Tour events

The Truth Tour plans more than 100 stops across the state through Election Day in November in hopes of increasing citizenship in a hyper-partisan era. At each stop, the Center for Michigan –  Bridge’s parent organization – is asking what most concerns residents.

In Mackinaw City, the answer lies in the waters that provide much of the livelihood in this town of less than 1,000. The population surges during the summer, including an influx of seasonal workers for the town that serves as a base of operations for ferry service to Mackinac Island. 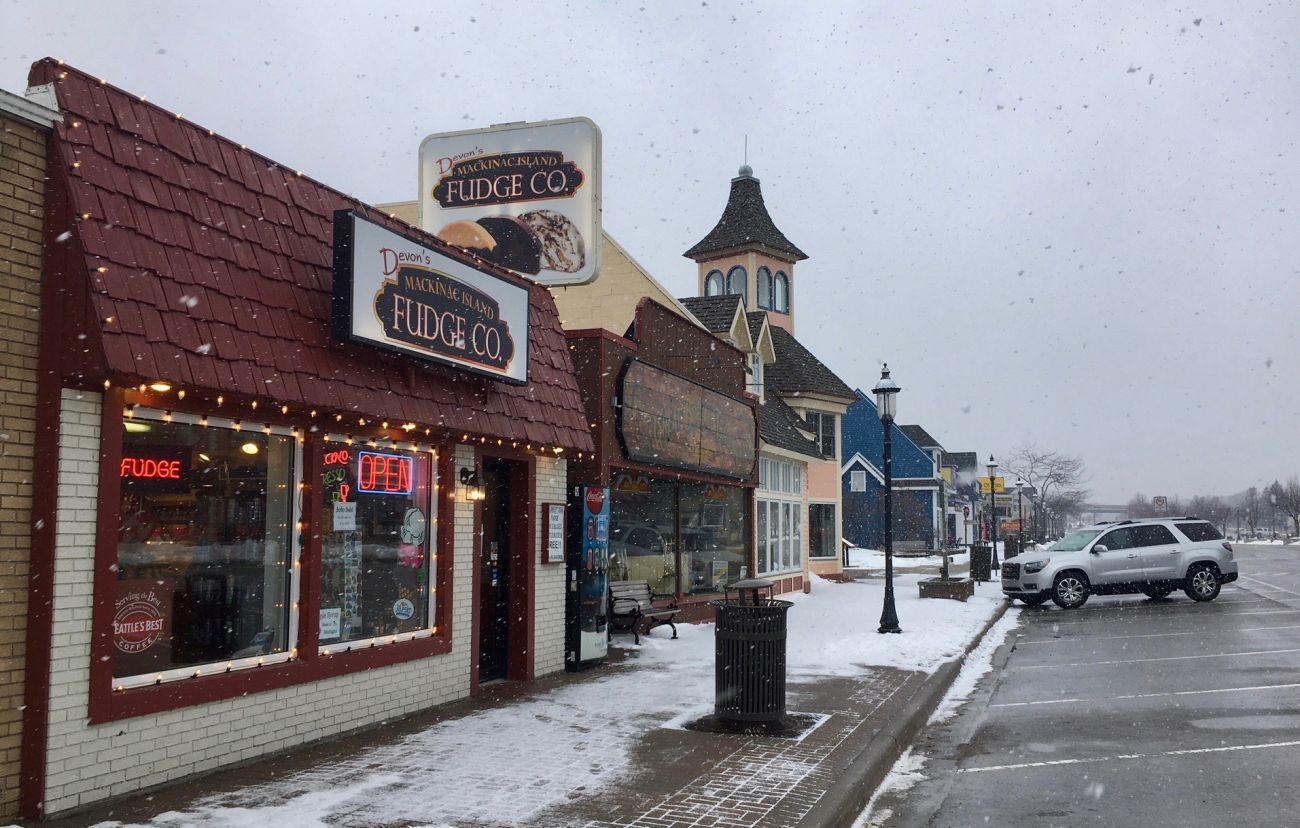 People here have only grown more concerned about the water following last week’s leak from an entirely different set of lines beneath the straits.

Officials on Wednesday were still responding to a leak of some 600 gallons of mineral oil from a pair of electric lines — operated by a Wisconsin utility, American Transmission Company (ATC) — that tripped offline on April 1.

A “Unified Command” including the U.S. Coast Guard, local emergency managers, tribal leaders and state and federal environmental agencies are responding to the leak.

The U.S. Coast Guard has called the leak a “low risk to fisheries and wildlife” as Great Lakes water dilutes the chemicals. And Anthony Wilson, a wildlife specialist with the U.S. Department of Agriculture said in a press release Monday his colleagues “did not see any oil sheen or injured wildlife” while observing more than 1,200 waterfowl.

These assurances don’t much comfort Warner or Dannatt, who fear other leaks could be on the horizon.

“Line 5 needs to go,” Dannatt said, adding “pretty much everyone” in the community was talking about it.

Enbridge calls Line 5 a crucial piece of energy infrastructure and says the risk of a leak miniscule. A recent state-commissioned report found there is a low risk of rupture from corrosion or other factors.

But several residents in Mackinaw City said they don’t much trust Enbridge, or the state for that matter.

In November, Michigan Gov. Rick Snyder announced an agreement that, among other provisions, requires Enbridge to replace a pipeline piece beneath the St. Clair River and construct a tunnel around it.

The deal also requires Enbridge to conduct studies about replacing the pipeline, building a tunnel to protect the section at the Straits of Mackinac and improving underwater monitoring.

On Wednesday, Snyder called on Enbridge to speed some of those efforts following revelations the same “vessel activity” — an anchor strike — that likely damaged the ATC electric lines may be responsible for three small dents in Line 5.

“An anchor strike was the largest risk identified in a previous independent analysis of the Enbridge pipeline, which is apparently what happened in the Straits last week,” Snyder said in a statement.

“We need the right answers, but we need them as soon as we can get them so that we can take action faster to protect the Great Lakes.”

Attorney General Bill Schuette, who is a Republican candidate for governor, said his office is “determining what legal action may be appropriate.” He also said the incident underscores the need to increase fines and “penalties for polluting the waters of the Great Lakes.”

Patrick C. Wyman, Mackinaw City’s village manager, called the recent leak “very concerning,” but he said he is confident in the agencies who are responding. 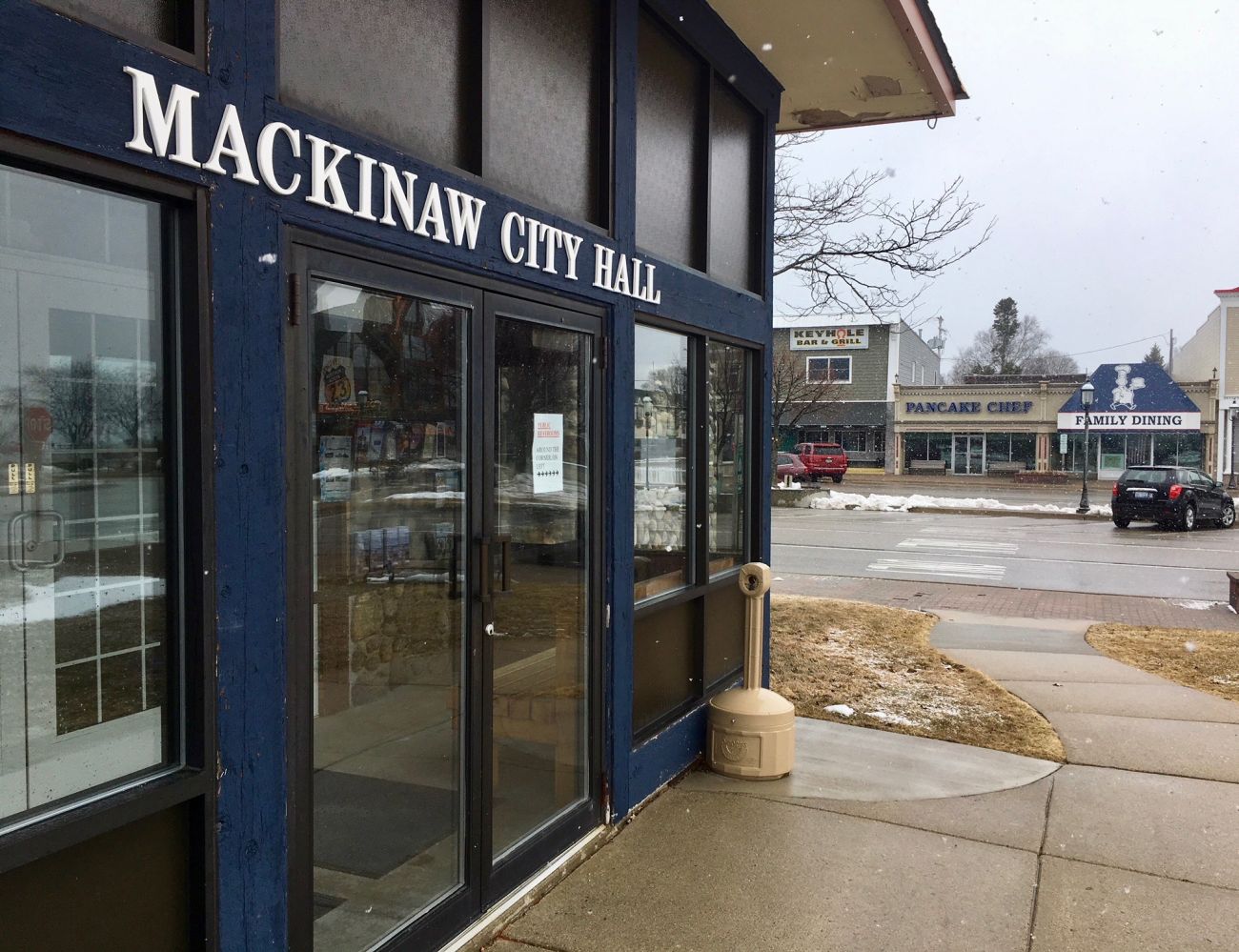 Wyman lives near where Line 5 runs and said he heard the hum of oil-sucking equipment while walking his dog Tuesday night.

But he’s taking a middle-of-the-road approach to the controversy and said the community has a good working relationship with Enbridge.

“Everyone wants the straits to be safe and clean,” he said.

Wyman called Line 5 one of two top issues for his community. The other: Logistical changes during Labor Day’s annual Mackinac Bridge Walk, which draws more than 30,000 participants. (The agency that operates the bridge, Mackinac Bridge Authority, this year is eliminating bus service to St. Ignace, forcing walkers to turn around following their 2.5-mile trip. “We really don’t know what to expect,” Wyman said.)

Warner, who moved to Cheboygan from Detroit 10 years ago, called the region “a wonderful place to live.” It’s where he met his wife three years ago while helping protect spawning lake sturgeon, a threatened species, from poachers.

“I went sturgeon guarding and caught my limit,” he joked.