As Michigan lawmakers jockey over the fate of the Line 5 oil pipeline in the Straits of Mackinac, a new report says more than a dozen other spots in the Great Lakes are also vulnerable to oil spills.

Crude oil production has surged across parts of the northern United States and western Canada since 2010, expanding oil transportation networks of pipelines and rail. That has brought new risks to the Great Lakes, which hold 20 percent of the world’s surface freshwater.

In a report released Monday, the Science Advisory Board of the International Joint Commission, an American-Canadian advisory body, identified 15 areas of “higher ecological vulnerability” to oil spills. That includes the Straits, where Enbridge Energy’s 65-year-old Line 5 has attracted the lion’s share of attention from those who fear a catastrophic rupture, however unlikely. 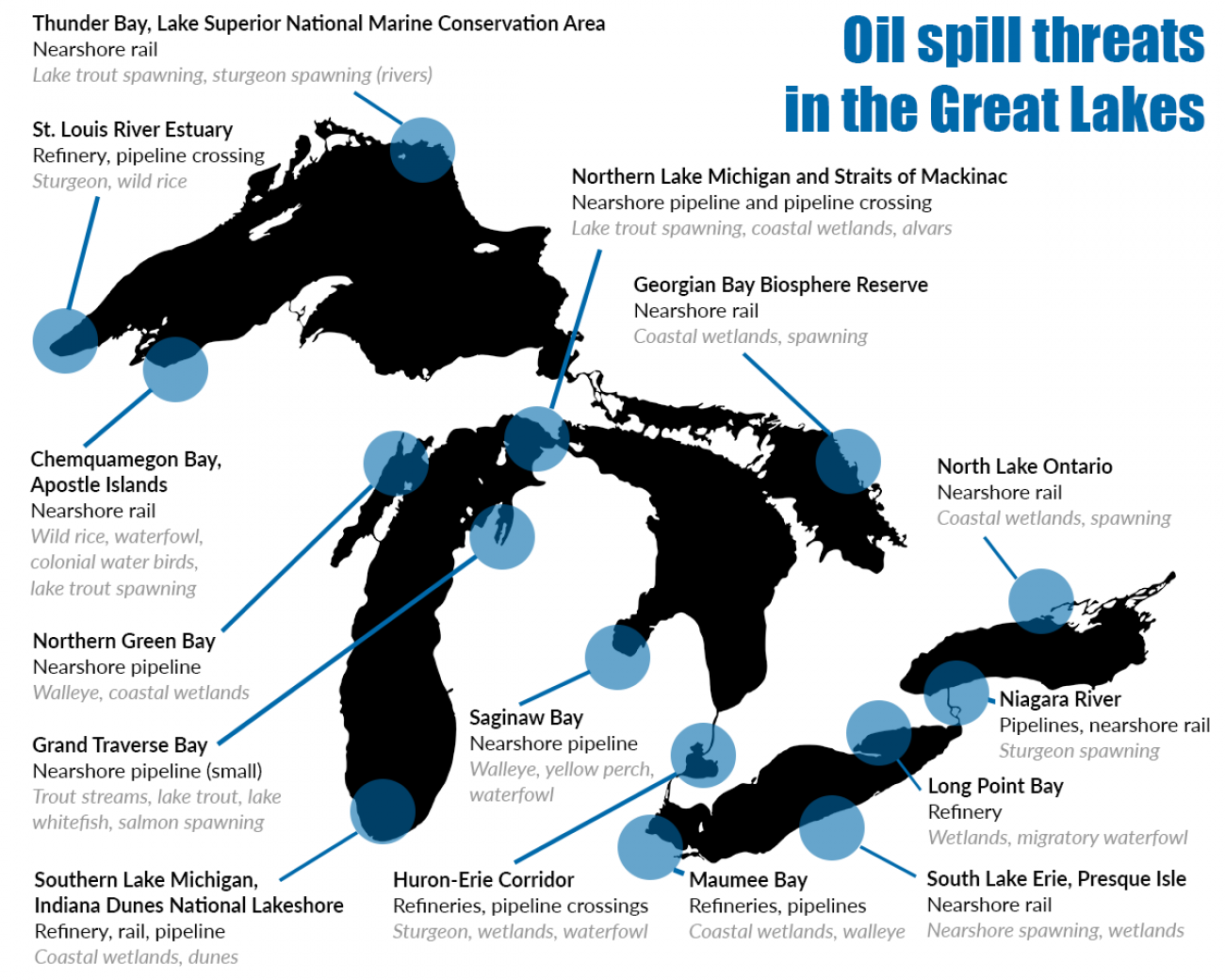 Those vulnerable areas range from wetlands and marshlands to fish spawning grounds, and the threatened species run the gamut, depending on the location. Lake sturgeon, walleye, suckers, northern pike, lake whitefish would be of concern in Lake Michigan, for instance, along with migratory and nesting birds, amphibians, reptiles and other animals.

“All levels of the aquatic food chain would be impacted by a spill, from plankton to fish to fish-eating birds and mammals,” the commission said in a news release Monday. “Because the lakes provide the largest source of fresh surface water for almost 40 million people and drinking water for many of these residents, the risk of a spill affecting drinking water may be significant, particularly when currents transport crude oil to the vicinity of drinking water intakes.”

Most of the vulnerable areas are near rail corridors or pipelines, and five are near refineries, according to the commission, which was established under a 1909 treaty to investigate cross-border water issues and approve certain water projects.

“While it’s appropriate to think about the Straits, that shouldn’t be the end of the conversation,” said John Bratton a senior scientist at LimnoTech, an Ann Arbor-based environmental science and engineering firm that produced technical research for Monday’s report.

“It’s just kind of shedding light that you have a lot more places with the potential for spills.”

The report focused narrowly on ecological risks of spills. Researchers considered where pipelines, railways and refineries handled large enough volumes of oil — close enough to a lake or upstream of a tributary — to significantly harm ecosystems. And they considered what types of wildlife would face most harm, Bratton said.

The report did not consider economic damage from spills, nor did it examine the physical condition of individual pipelines or rail lines.

The report  offered recommendations for more research in a variety of areas, while highlighting lingering challenges for first responders in a would-be spill — such as grappling with ice during a winter disaster.

Researchers know much less about how oil spills affect freshwater ecosystems compared to those in oceans, the report said. That’s because ocean disasters — like the 1989 Exxon Valdez tanker spill in Alaska, or BP’s 2010 Deepwater Horizon blowout in the Gulf of Mexico — are more common.

But Monday’s report flagged one prominent freshwater incident: Enbridge Energy’s Line 6B rupture in the Kalamazoo River, one of the worst inland spills in U.S. history. More than 1.2 million gallons of crude oil was recovered during a four-year cleanup. Enbridge has paid nearly $1.3 billion for cleanup and restoration.

The report comes as Michigan Gov. Rick Snyder and other Republicans are racing to lock in a deal with Enbridge to swap out Line 5’s twin pipelines beneath the Straits and bury a new pipe beneath 100 feet of bedrock. The tunnel is expected to take up to 10 years to build, costing Enbridge $350 million to $500 million.

Snyder wants to finalize the plan before Gretchen Whitmer, a Democrat and opponent of Line 5, succeeds him.

Supporters of the tunnel deal say it would not only protect Line 5 in the Straits, but it would also bolster safety at dozens of other water crossings along Line 5’s 547-mile path through Michigan. That’s because Snyder’s deal with Enbridge would require added leak protection and safety upgrades.

Environmental groups and other critics say shutting down Line 5 is the only way to completely prevent a spill. They argue the tunnel deal would only assure Line 5 operates indefinitely.