LANSING — Michigan Gov. Rick Snyder has ended months of speculation and about the fate of Line 5, Enbridge Energy’s oil and gas pipeline in the Straits of Mackinac and a magnet for environmental concerns.

Enbridge plans to swap out the 65-year-old Straits section for new pipe to be buried hundreds of feet below the lake surface — and the Canadian pipeline giant would fund it under a deal with the State of Michigan signed Wednesday and subject to other regulatory approvals.

The agreement would also bolster protections for vulnerable water crossings outside of the Straits, state officials said.

Read the 20-page agreement with Enbridge on Line 5

“This solution offers the greatest possible safeguards to Michigan's waters while maintaining critical connections to ensure Upper Peninsula residents have the resources they need,” Heidi Grether, director of the Michigan Department of Environmental Quality, told reporters. "This historic agreement will result in eliminating nearly every risk of an oil leak in the Straits.”

Enbridge said a tunnel would reduce the likelihood of a spill in the choppy waters between Lakes Michigan and Huron to “near zero” and “eliminate the potential for an anchor strike.” 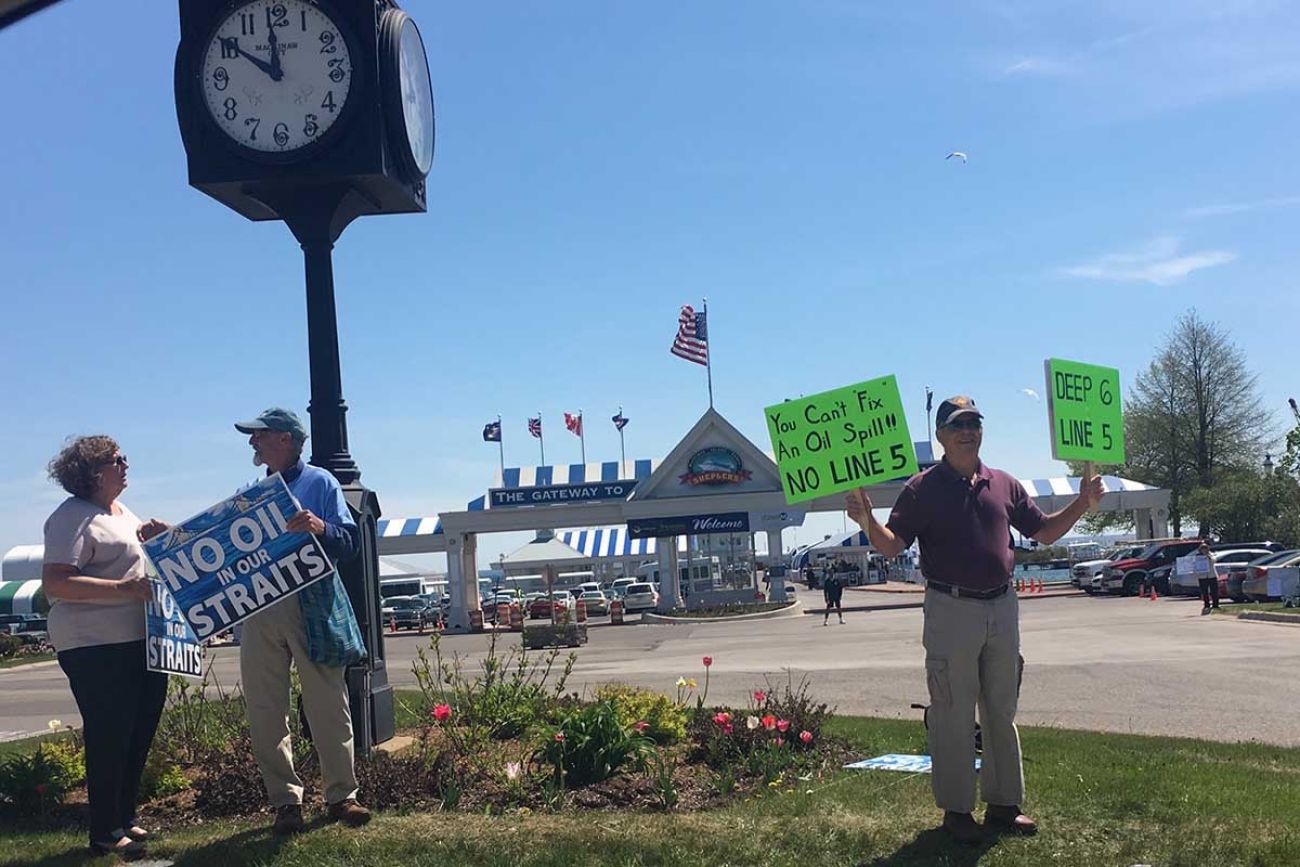 The project outlined in Wednesday’s deal carries a price of $350 million to $500 million and is expected to take seven to 10 years to complete. Enbridge would pay for its design, construction, operation and maintenance for up to 99 years.

The effort is subject to approvals by the Mackinac Bridge Authority, the independent state agency that operates the iconic bridge connecting Michigan’s peninsulas.

The authority would own the tunnel, and Enbridge would lease space. The tunnel could also house electrical lines, broadband cables and other infrastructure.

Keith Creagh, Michigan Department of Natural Resources director, said he expects the authority will sign off on its end of the bargain before Snyder, who is term limited, leaves office in early January.

The announcement did not assuage environmentalists and others who have loudly called for a shutdown.

“The tunnel will take years to build and during that time the risk of a spill from the existing 65-year-old pipeline poses a very serious threat,” Chris Kolb, president and CEO of the Michigan Environmental Council, a Lansing-based advocacy group, said in a statement. “At any moment, Line 5 could leak 2.4 million gallons of crude oil into the Great Lakes and cause billions of dollars of damage to our waters, coastal communities, and recreational economy.”

Line 5 stretches from Superior, Wisconsin, to Sarnia, Ontario, and carries up to 23 million gallons of oil and natural gas liquids per day.

Enbridge has touted the pipeline as a “vital piece of Michigan energy infrastructure” for meeting Michiganders’ energy needs — including much of the Upper Peninsula’s demand for propane. Studies funded by environmental groups have sought to cast doubt on the pipeline’s importance for the state, concluding that it instead largely benefits Canada by moving fuel through Michigan.

Line 5 is 30 inches in diameter except beneath the Straits, where it splits into two 20-inch lines.

Enbridge would decommission those dual lines under the agreement and build a new 30-inch segment protected in bedrock some 100 feet below the lake’s surface.

“The agreement with the state reflects Enbridge’s steadfast commitment to protecting the Great Lakes while safely meeting Michigan’s energy needs,” the company said in a statement Wednesday.

That 4.5-mile Straits segment has drawn the most concerns because of its age, sensitive location, its vulnerability to ship anchor strikes and because of Enbridge’s transparency lapses about the pipeline’s upkeep. The pipeline’s critics are concerned risks to the Great Lakes should the pipeline rupture.

The new agreement requires Enbridge to adopt several measures to reduce risk during tunnel construction. Enbridge must keep staff at the Straits and be ready to shut down the line within 15 minutes under adverse conditions — including if waves reach heights of 6.5 feet over the course of an hour.

The state would install new radar technology to track waves under the agreement, and Enbridge agreed to set aside nearly $1.9 billion for cleanup if disaster strikes.

The agreement isn’t limited to the Straits. It also requires Enbridge to increase leak prevention and safety efforts at dozens of other water crossings along the pipeline’s 547 miles in Michigan.

Environmentalists say the tunnel project would unnecessarily boost Line 5’s lifespan, take too long complete and carry other risks during construction and operation.

“This agreement indefinitely extends the life of Line 5’s current Straits crossing while what is actually needed is an expiration date,” said Mike Shriberg, Great Lakes regional executive director of the National Wildlife Federation and a member of Governor Snyder’s Pipeline Safety Advisory Board. “There is only one solution which would actually protect our waters: beginning to decommission this aging pipeline in the Straits immediately.”

Critics have also suggested that routing electrical lines and an oil pipeline through one tunnel could boost the risk of an underground explosion.

Asked about those concerns Wednesday, Creagh said experts consulting with the state see ways to prevent such episodes.

“That's all highly technical stuff,” he said. “We need to let the experts assure that safety,”

Wednesday’s deal came nearly three years after Snyder created a Pipeline Safety Advisory board to offer input on Line 5 and other pipelines crisscrossing Michigan — a response to swirling concerns about the pipeline. And the deal arrived nearly one year after Snyder — without that board’s input — forged an agreement with Enbridge that ultimately set up Wednesday’s conclusion.

The previous deal, signed in November 2017, required Enbridge to study alternatives to Line 5, to improve underwater monitoring in the Straits, swap a Line 5 segment beneath the St. Clair River for a tunnel-protected line and study ways to bolster safety at other water crossings beyond the Straits.

In July, Enbridge released a report calling it “feasible” replace the Straits segment with a new protected in a tunnel.

“A reliability assessment of the tunnel alternative demonstrated there is no credible scenario that would result in a release of product from the tunnel into the Straits,” the report said. “The probability of this occurring is estimated to be negligible, which means the probability is considered to be virtually zero.”

Also in July, a joint investigation by Bridge Magazine and the Michigan Campaign Finance Network revealed that Michigan leaders allowed lobbyists and officials with direct relationships to Enbridge to offer extensive input about the fate of the pipeline.

For months Snyder, attorney general and governor hopeful Bill Schuette and other Republican leaders had voiced support for the tunnel idea.

Unclear is whether the agreement could be reconsidered after Snyder leaves office in January.

Democrat Gretchen Whitmer, who is running against Schuette for governor, has promised to shut down Line 5. And Dana Nessel, a Democrat running for attorney general against Republican Tom Leonard, has pledged to take Enbridge to court in an effort to do the same.

Leonard on Wednesday applauded the deal, saying the state will benefit from “this next-generation solution.”

Creagh, the DNR director, told reporters he could not answer questions about how Wednesday’s deal would stand up against any future efforts to reverse it.