In Northern Michigan, tribes protesting Line 5 hunker down for winter

Now his focus is getting rid of a pipeline: Line 5, Enbridge Energy’s 645-mile oil and gas pipeline that crosses beneath the Straits of Mackinac and has created an environmental firestorm.

“If I get on another piece of equipment like that, it’s to take that pipeline out,” the 39-year-old father of six said inside a heated tent on a chilly October morning.

For now, peaceful protest is his tool of choice. It’s why Cloud, a member of the Gun Lake Potawatomi Tribe, has camped here since August — about 150 miles north of his hometown of Mount Pleasant and 15 miles south of the Mackinac Bridge.

Joining him is a small group of other “water protectors” representing Native Americans across Michigan and beyond. They say a Line 5 rupture, however unlikely some experts describe it, would threaten their way of life. 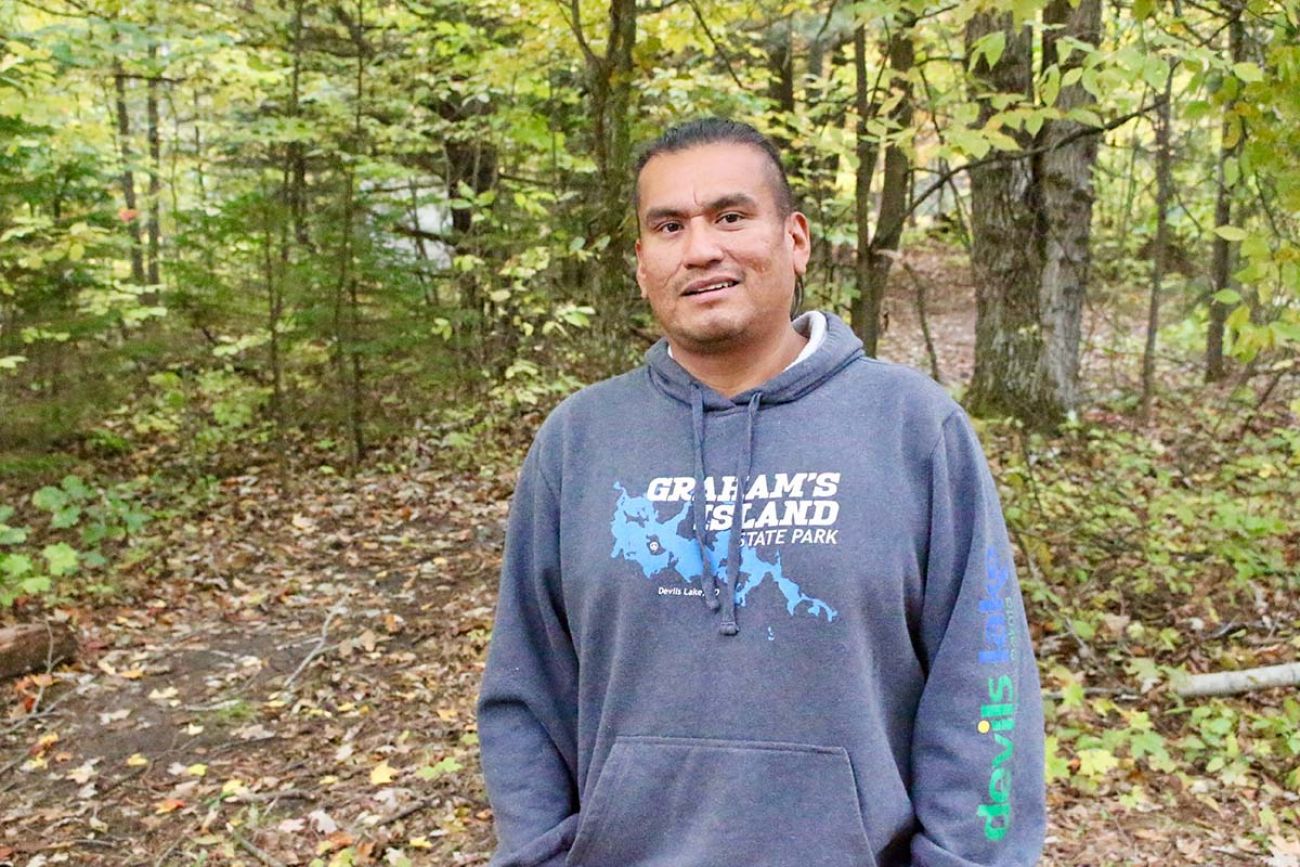 “Our livelihood depends on the currents of that water that bring the fish,” said James “OJ” Pitawanakwat, who grew up on Lake Huron’s Manitoulin Island and is a member of the Wiikwemkoong Unceded Territory First Nation in Ontario. “It’s our way of life, not only for the Native Americans in Michigan, but also all across the Great Lakes.”

Pitawanakwat and his wife, Christina Keshick of the Saginaw Chippewa Indian Tribe, own the wooded properties in Levering and nearby Cross Village that now host a collection of tents and other makeshift structures.

When Bridge Magazine visited last month, a chainsaw’s growl occasionally reverberated across the camp as two of the men worked to build a wooden shelter that would better protect them from the bitter cold of a looming Northern Michigan winter.

They call the camp Anishinaabek (Anishinaabe is an umbrella term for a Odawa, Ojibwe, Potawatomi and other culturally related peoples in the U.S. and Canada).

Its 10 or so more permanent members are inspired by a far larger pipeline protest that stretched from 2016 into early 2017; Several were among the thousands of protesters who faced tear gas and water cannons near the Standing Rock Indian Reservation in South Dakota in an attempt to thwart Energy Transfer Partners’ Dakota Access oil pipeline.

Despite the protests, the pipeline was completed last year.

“Those fires burn in us now, so we take them where we go,” said Nancy Gallardo, a 62-year-old Standing Rock veteran from Grand Rapids who is spending her time here after retiring from a career in community media.

Until recently, “most Michiganders didn’t really realize there was a pipeline under the Mackinac Bridge,” she said. 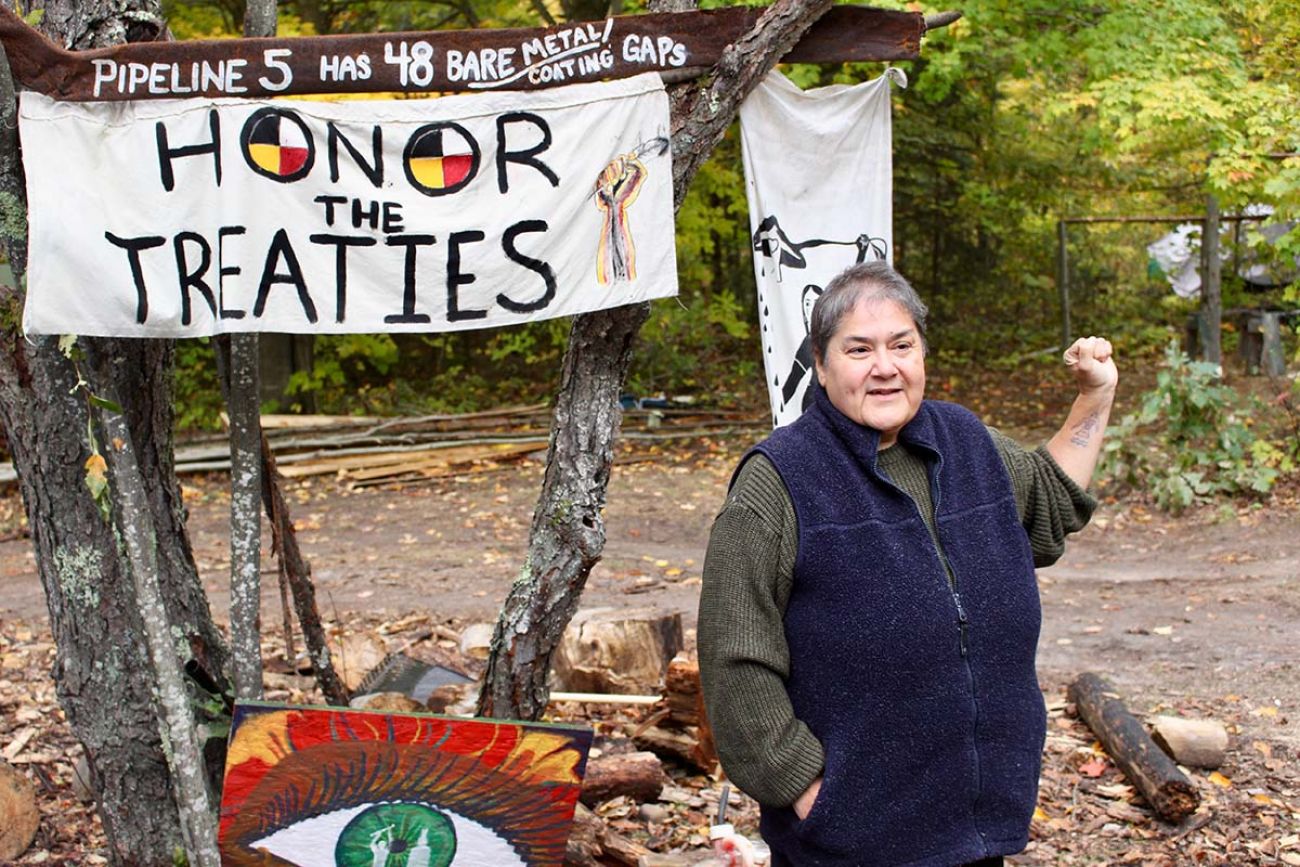 That’s why Cloud, who said he camped at Standing Rock for four or five months, brought his and other Michiganders’ tents from Standing Rock here.

For now, Anishinaabek is a far cry from the mass movement at Standing Rock that made international headlines and resulted in hundreds of arrests and injuries. But the protesters consider this camp just as important.

Enbridge, headquartered in Calgary, has touted 65-year-old Line 5 as a “vital piece of Michigan energy infrastructure,” and it says it’s committed to protecting the Straits. The pipeline transports up to 540,000 barrels of light crude oil per day from from Superior, Wisconsin, to Sarnia, Ontario. That includes a stretch beneath the Straits of Mackinac where the pipeline is twinned.

Enbridge said it “recognizes the rights of people to express their views legally and peacefully, and to discuss Enbridge's business and projects.”

“We encourage active discussions on our operations and projects, as long as everyone is respectful of those who live and work near our pipelines, including our employees and contractors, and of our pipelines and facilities,” spokesman Ryan Duffy told Bridge in an emailed statement.

For food and other supplies, the folks at Anishinaabek say they rely largely on donations, and they hunt and fish.

The timeline at Anishinaabek? Until the pipeline’s permanently shut down the campers say.

That could be quite a while.

Neither Enbridge nor Michigan’s current Republican leaders have plans to stop running oil through Line 5. Gov. Rick Snyder last month signed a deal for the Canadian pipeline giant to move forward on swapping out the twin pipelines in the Straits for new pipe that would be protected in a bedrock tunnel — some 100 feet below the lake bottom.

That effort is expected to take seven to 10 years.

Echoing some Michigan tribal leaders, the Anishinaabek protesters call this plan untenable, and are irked that it came with little input from tribes.

“No matter how many petitions we sign, no matter how many phone calls we make, this particular political organization we have doesn’t seem to give a rat’s ass,” Gallardo said.“The only viable solution is no pipelines under the Great Lakes.”

Snyder’s administration says it cares about the views of Michigan’s tribes.

“The Governor values the input of tribal leaders on a variety of issues as the tribes are valuable partners in keeping Michigan’s waters healthy and clean,” Nick Assendelft, a spokesman for the Michigan Agency for Energy, said in an emailed statement.

Assendelft noted a tribal representative — Homer Mandoka, a tribal councilman with the Nottawaseppi Huron Band of the Potawatomi — sits on the Snyder’s Pipeline Safety Advisory Board, which was assembled amid the outcry over Line 5. (Snyder, however, forged the tunnel agreement with Enbridge without the knowledge of several board members.)

“The Governor appreciates an open and robust dialogue with those on all sides of the Line 5 issue,” Assendelft said.

In its decades of operation, there have been no documented leaks of Line 5 in the Straits.

But Enbridge also owned Line 6B, which broke in the Kalamazoo River in 2010, triggering one of the worst inland oil spills in U.S. history. More than 1.2 million gallons of crude oil was recovered during a four-year cleanup and Enbridge has paid nearly $1.3 billion for cleanup and restoration.

Cloud said memories of that spill linger in the back of his mind.

“The damage on that little river there is what concerns me about what’s going to happen when this one breaks,” he said.

Editor’s note: Bridge Magazine visited this site with help of the Institute for Journalism and Natural Resources, whose mission is to promote public dialogue about natural resource issues through better journalism.